Torsten Nagengast’s involvement with watches began as a collector, and developed into a business based on locating stocks of old movements – often as yet unused – and casing them in new watches. His website currently includes a fascinating flyback chronograph, the Racetimer Flyback Chronograph 1960, based on a movement by Baumgartner. The price of the 44 pieces could be as low as €499 + VAT, or €593.81. 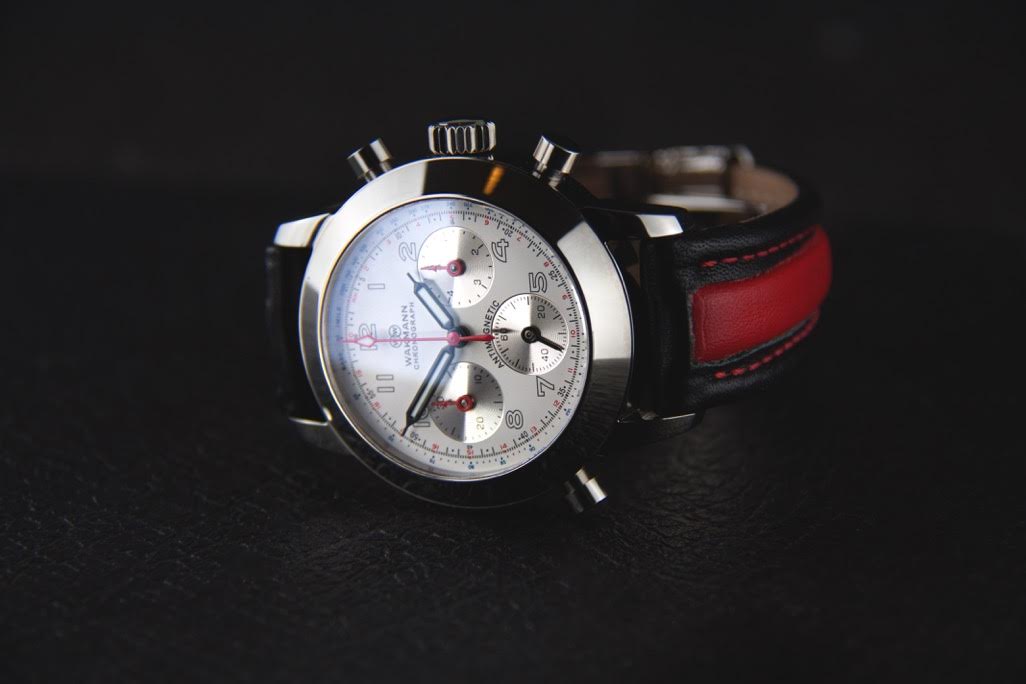 The Racetimer has a stainless steel case, 40 mm in diameter, 14 mm thick, with screw-in solid caseback, and a water resistance of 5 atm, 50 metres. The dial is branded Wakmann, and has subdials for continuous seconds, chronograph minutes and hours. The chronograph seconds scale includes a tachymetric scale in blue, and a telemeter scale in red – the latter converting the time between when a gunshot or stroke of lightning is seen and when it is heard, into distance, in kilometres. The strap is attractive, in red and black leather. An optional Milanaise strap is also available. 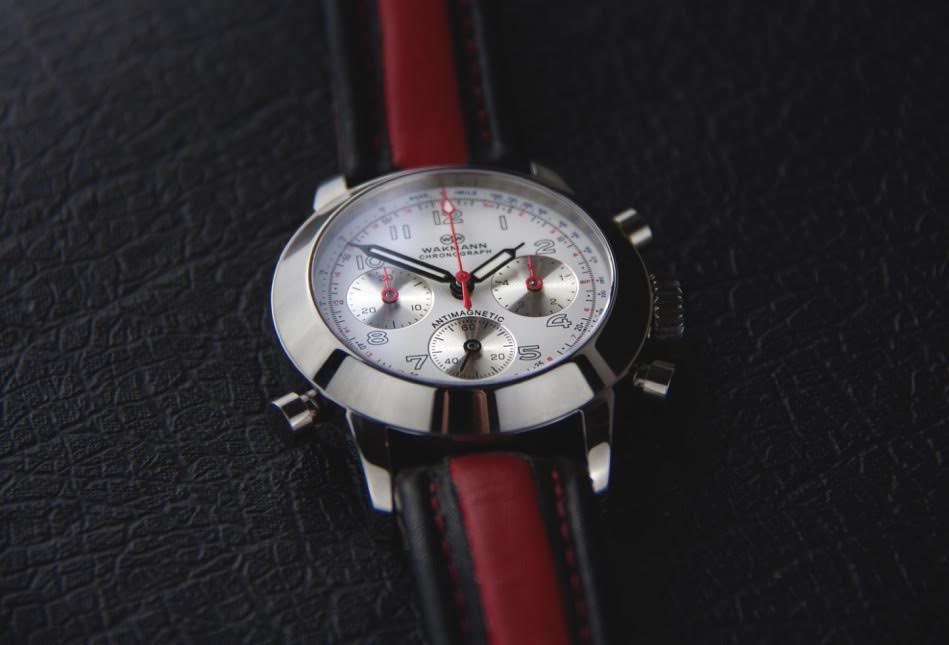 The Racetimer is powered by the BFG 590 flyback chronograph movement (there seems to be some confusion as to whether it’s BFG or BGF) was made in Switzerland in the 1960s. It is hand-wound, with a power reserve of 42 hours. It has a sort of column wheel that controls the chronograph functions, 17 jewels, and it runs at 21,600 vibrations per hour, 3 Hertz. The two pushers at 2 and 4 o’clock operate conventionally, start, stop, reset, and flyback restart. The pusher at 8 o’clock has a rather unusual function: apparently the minute and hour chronograph counters are running continuously. So to take a time measurement, the two counters have to be zeroed by pressing the 8 o’clock pusher before starting the chronograph. 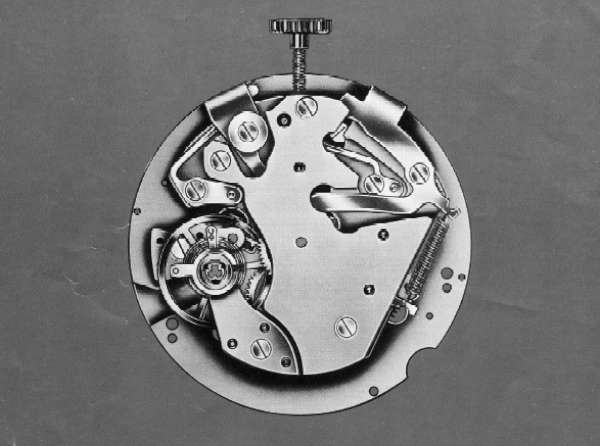 The movement is rather unusual, with a long exposed spring in view, and it was apparently designed during the quartz crisis in an attempt to provide a cheap mechanical alternative to the onslaught of quartz movements from Japan. 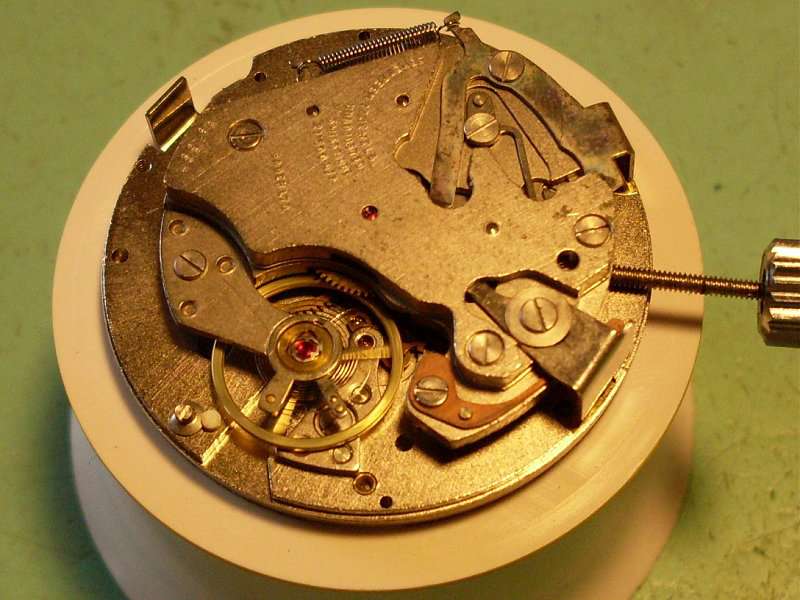 As already mentioned, the price could be as low as €593.81, as compared to a list price of €1,550. It looks lovely, with an automotive feel. The movement is unusual and idiosyncratic, not super-high quality, but in any case a Swiss movement. Torsten Nagengast provides a two-year guarantee on the watch. More information from the Torsten Nagengast website, though I would suggest writing to them direct by e-mail, office@torsten-nagengast.de. 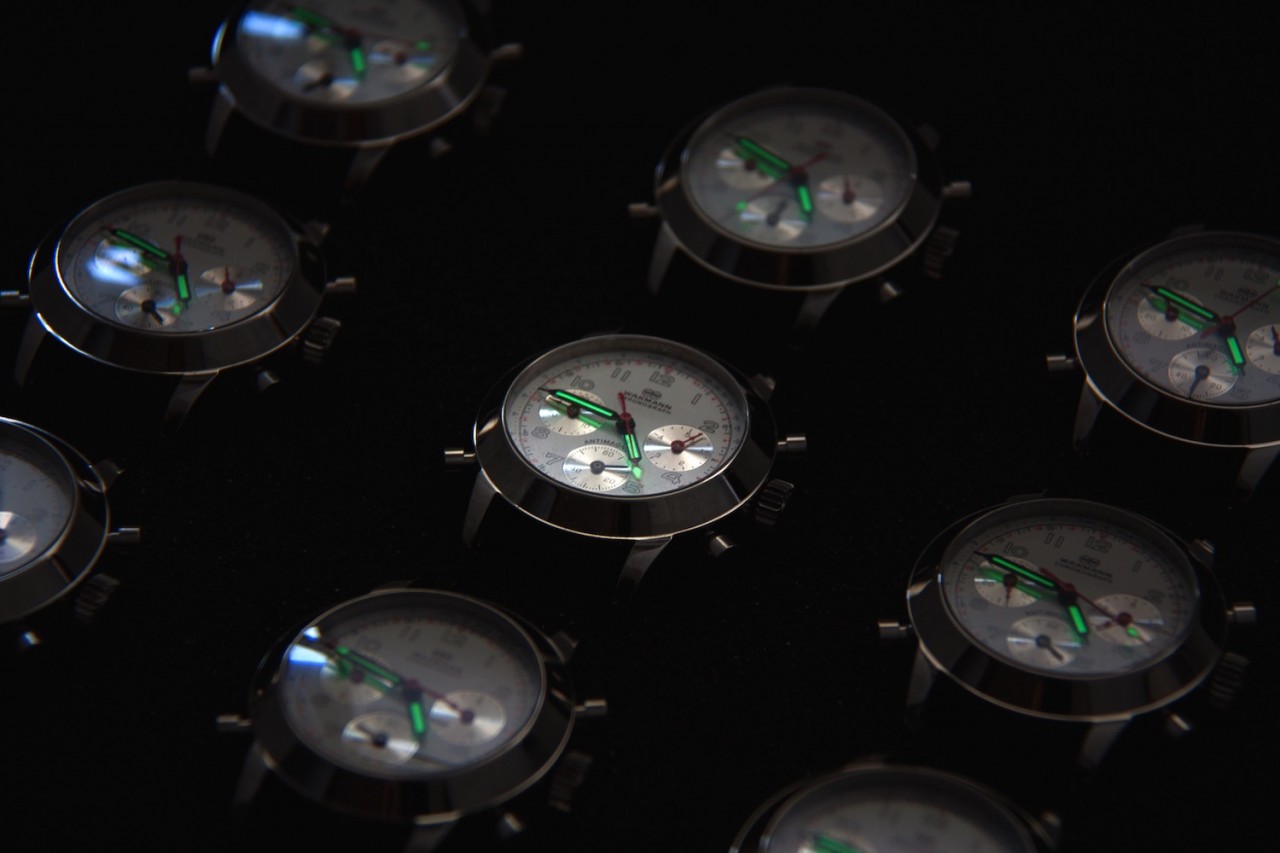