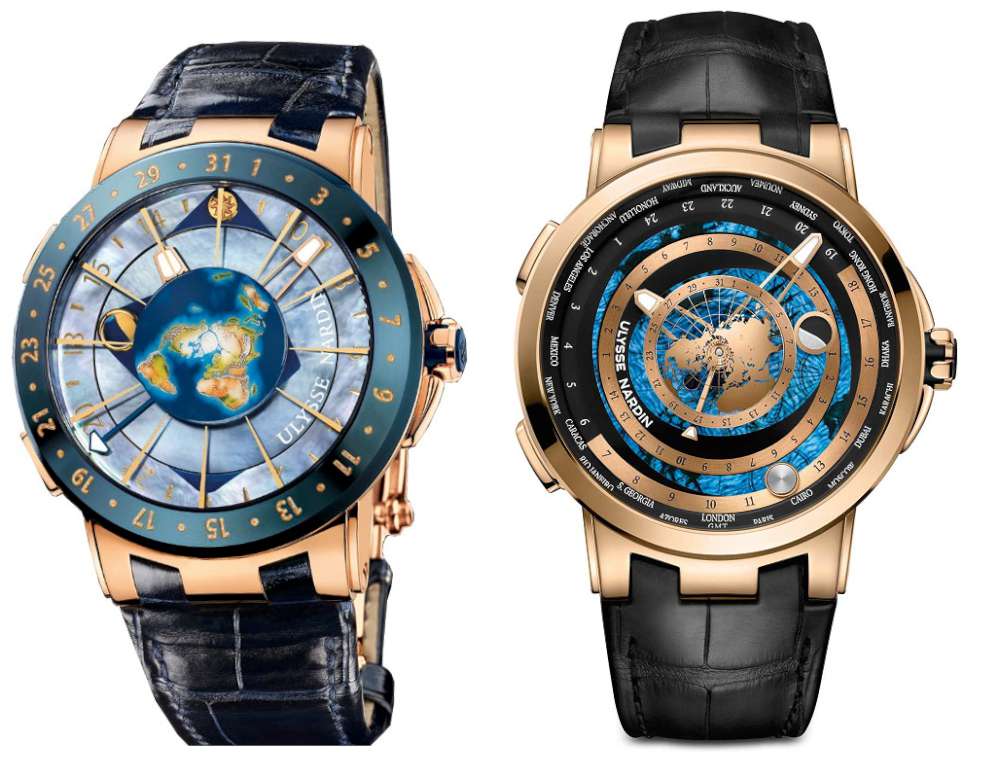 This is an expensive watch in platinum or rose gold, and it is large at 46 mm in diameter. The case has the characteristic triple lug linking it to the leather strap, which has a folding clasp. The crown is screw-down, and water resistance is 100 metres, a nice touch for a watch that will be useful for people who sail. The caseback has a sapphire crystal window revealing the movement: the brand haven’t provided this view yet. 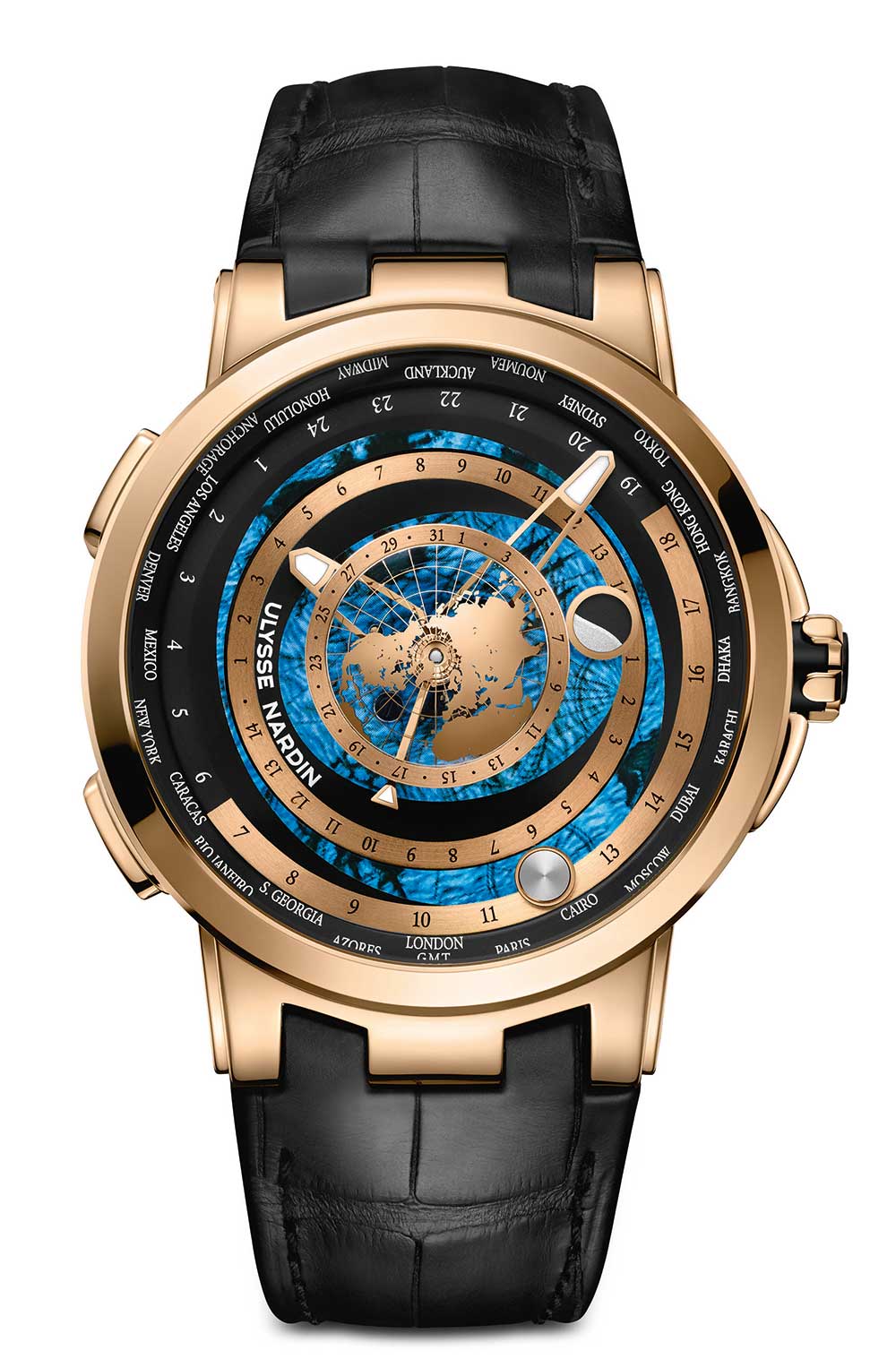 The design based on successive discs is very attractive and a vast improvement on the previous Moonstruck. At the centre, the northern hemisphere is seen from above, and this remains fixed. The scale around the world map is for the date, with an arrow pointer. Then there are three concentric discs that revolve around the world map. The first bears the moon, and the second the sun. The moon also shows the phases of the moon, by means of the combination of two discs. The first has a circular hole, and the disc underneath has an area of colour – precious metal – with a sinusoidal edge. In addition, the bright side of the moon always faces the sun. The hour, minute and date hands have tips with SuperLuminova. 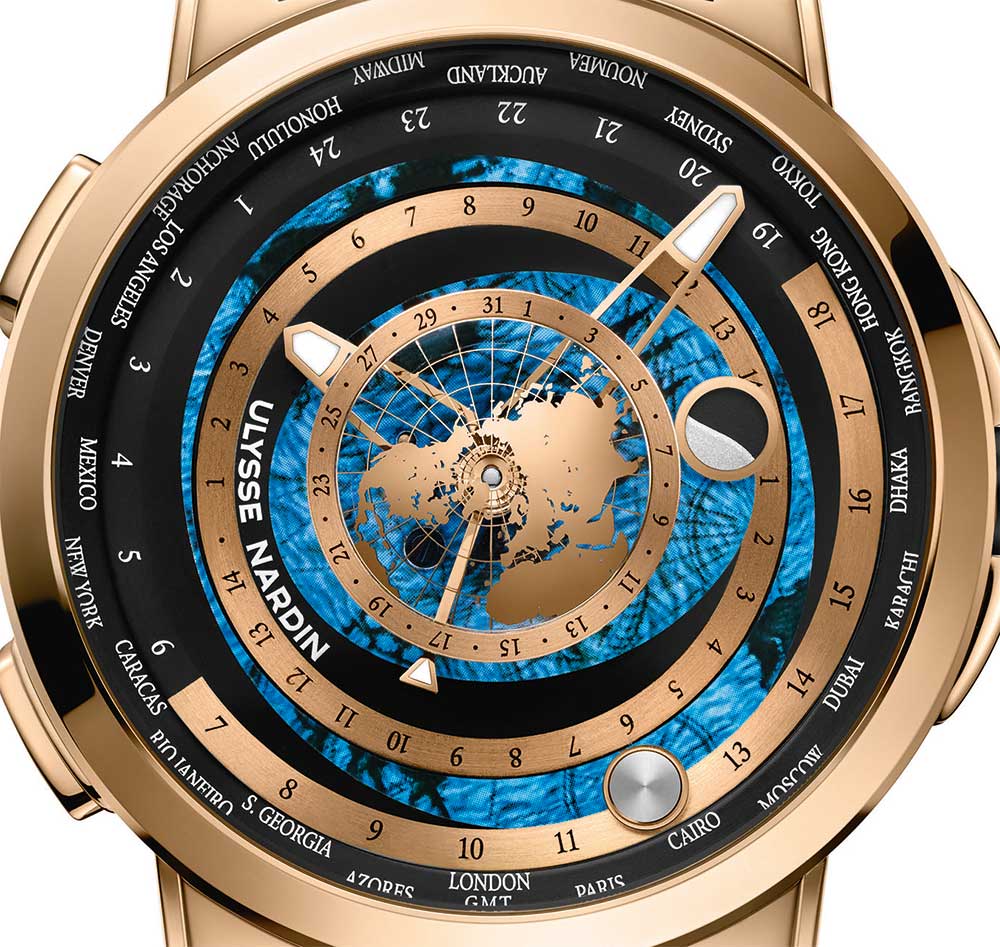 The moon affects our planets by exerting a differential force of gravitation on the two sides of the earth, causing the tides. These are shown by a blue disc below the gold or platinum rings. The tide on the side of the earth closest to the moon is highest, while on the far side there is another high tide, but lower, nicely illustrated on the watch. The sun also exerts a tidal force, much less than that of the moon, and this is also shown. So the watch shows high and low tides, and also spring and neap tides – tides will be highest when the effect of sun and moon coincide. This occurs when sun and moon are in alignment, so at new and full moon, twice a lunar month. For most of us, this rhythm has no influence on our lives: for people at sea, it’s important. But it also has an atavistic significance: the spring and neap tide cycle is basically seven days, from the highest high tides to the lowest. I don’t know for sure but I would guess that that is the origin for the seven-day week cycle, way back in the dawn of mankind.

The sun is borne on a ring showing the 24 hours and a day-night scale. This is used to read off the time at any of the 24 time zones shown with the conventional cities.

It’s a remarkable display, comprehensive, immediate to understand, and very beautiful. Apparently the concept for the watch derived from an observation made by a fisherman in Malaysia to Rolf Schnyder, then owner of the brand, about a tide watch by American brand Krieger, that showed the tides but only in a certain geographical location. The concept was transformed into a movement through the genius of Ludwig Oechslin, working with the entire Ulysse Nardin movement development team. I am constantly amazed at the amount of innovation performed by Ulysse Nardin, and Oechslin deserves to be one of the most famous watchmakers of all time, with his brilliance at converting complex concepts into the simplest possible mechanical form.

Simple set-up and use

As with all Ulysse Nardin watches, the user experience is simple. The two pushers on the left move just the hour hand backwards or forwards by one hour, a function useful for travellers when changing time zone. The date is changed forwards or backwards using the crown in the first position, the time in the second position. Adjustments to the moon phase are separate from the date. The moon phase display is exceptionally accurate, with a deviation of one day in 40 years. The previous Moonstruck watch was supplied with a watch-winder box, and complete instructions on how to set up the displays. 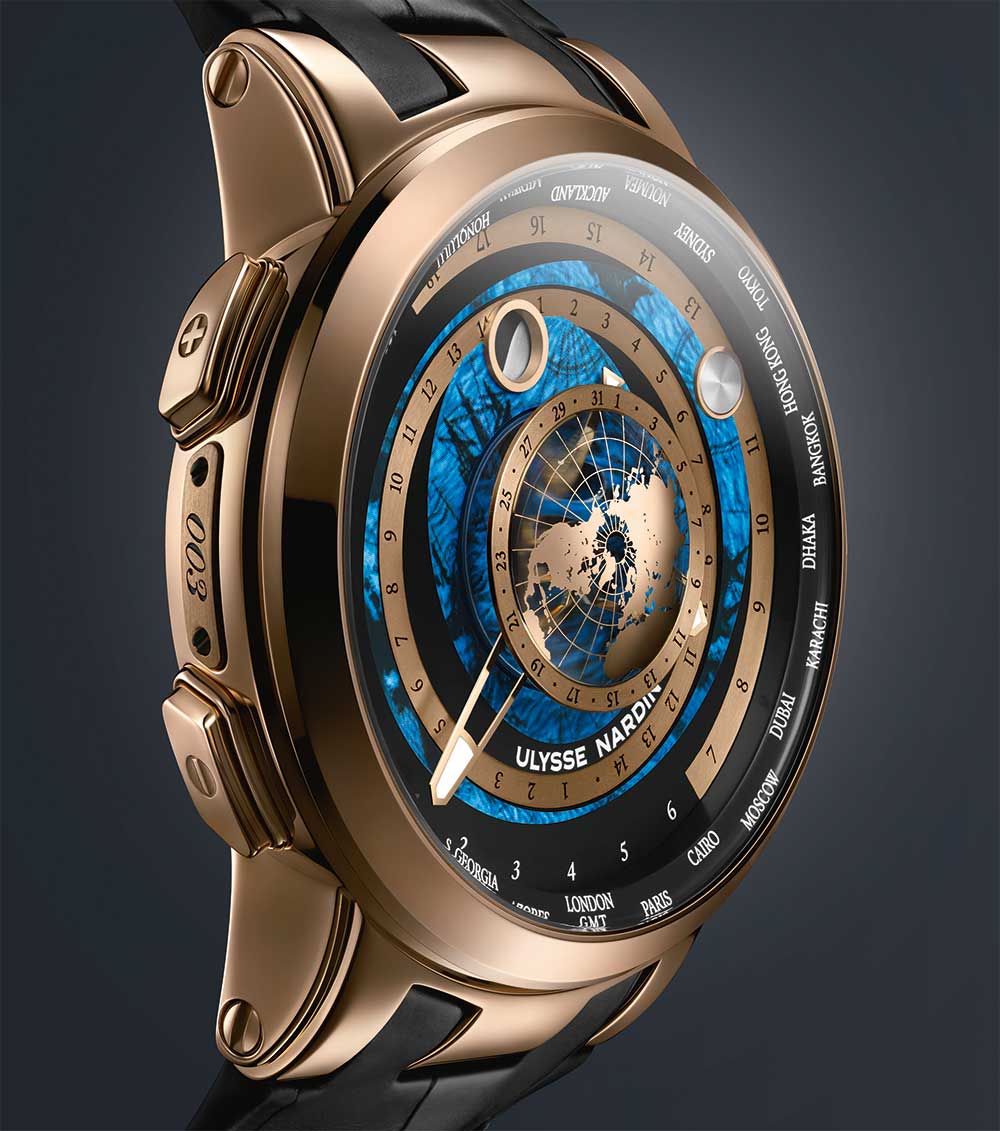 The UN-106 calibre was designed and built in-house. It incorporates silicium technology for the escapement and balance spring. It is self-winding, with a power reserve of about 50 hours. 46 jewels. 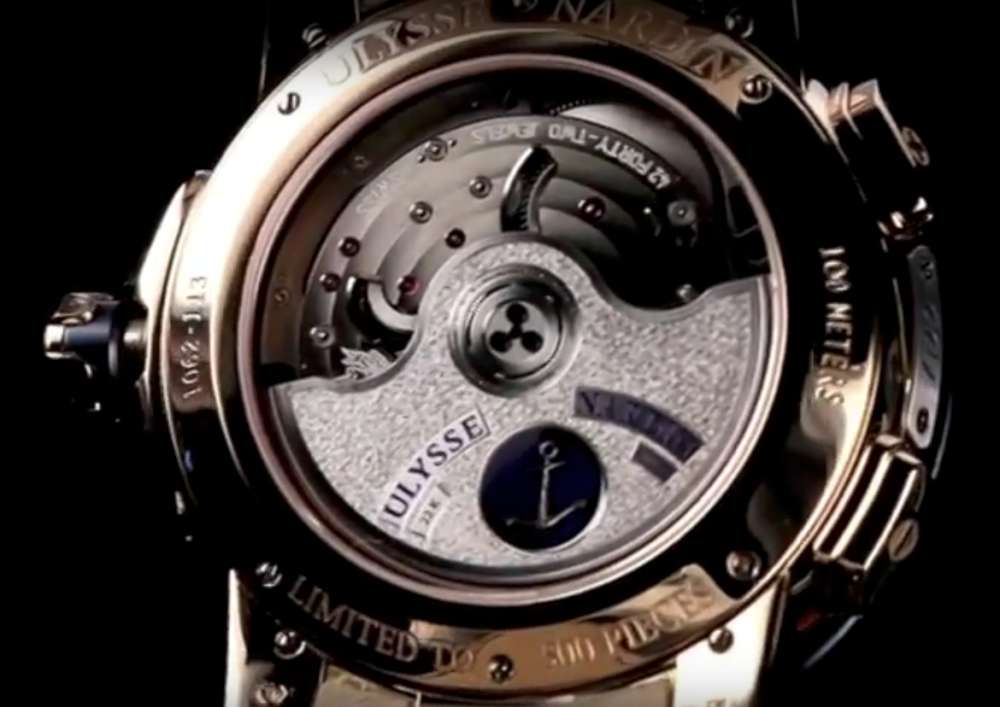 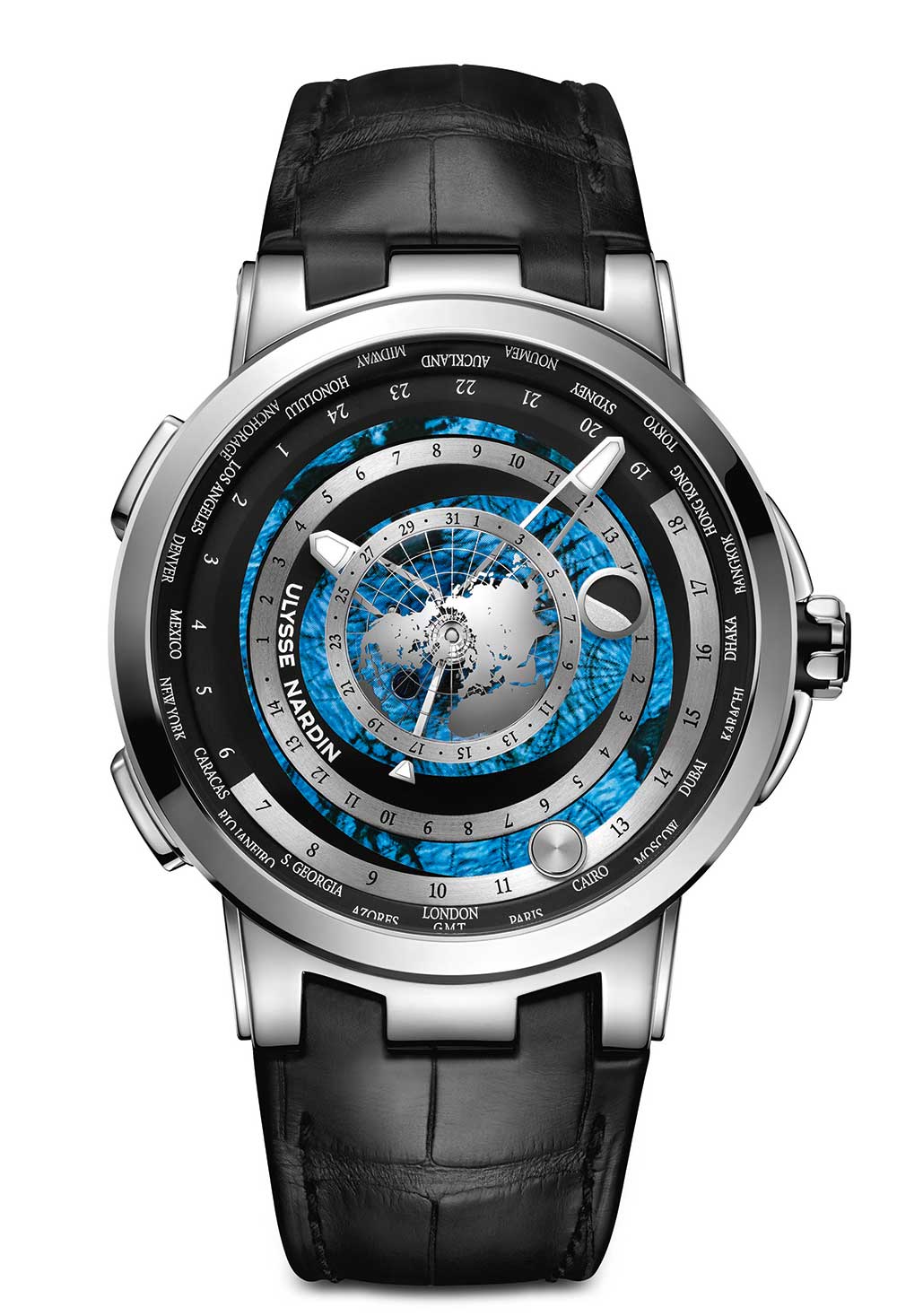