The EZM 1.1 mission timer chronograph by Sinn is the latest version of their classic EZM 1 released in 1997, 20 years ago. The EZM 1.1 also celebrates the opening, on 31 August 2017, of Sinn’s new headquarters at Wilhelm-Fay-Strasse 21, Frankfurt. At this new and larger building, Sinn make their watches, and customers can purchase them direct here as well as viewing old models no longer available. The watch marks another anniversary: Lothar Schmidt, current owner of Sinn, has been directing the business since 1 September 1994, for the last 23 years. 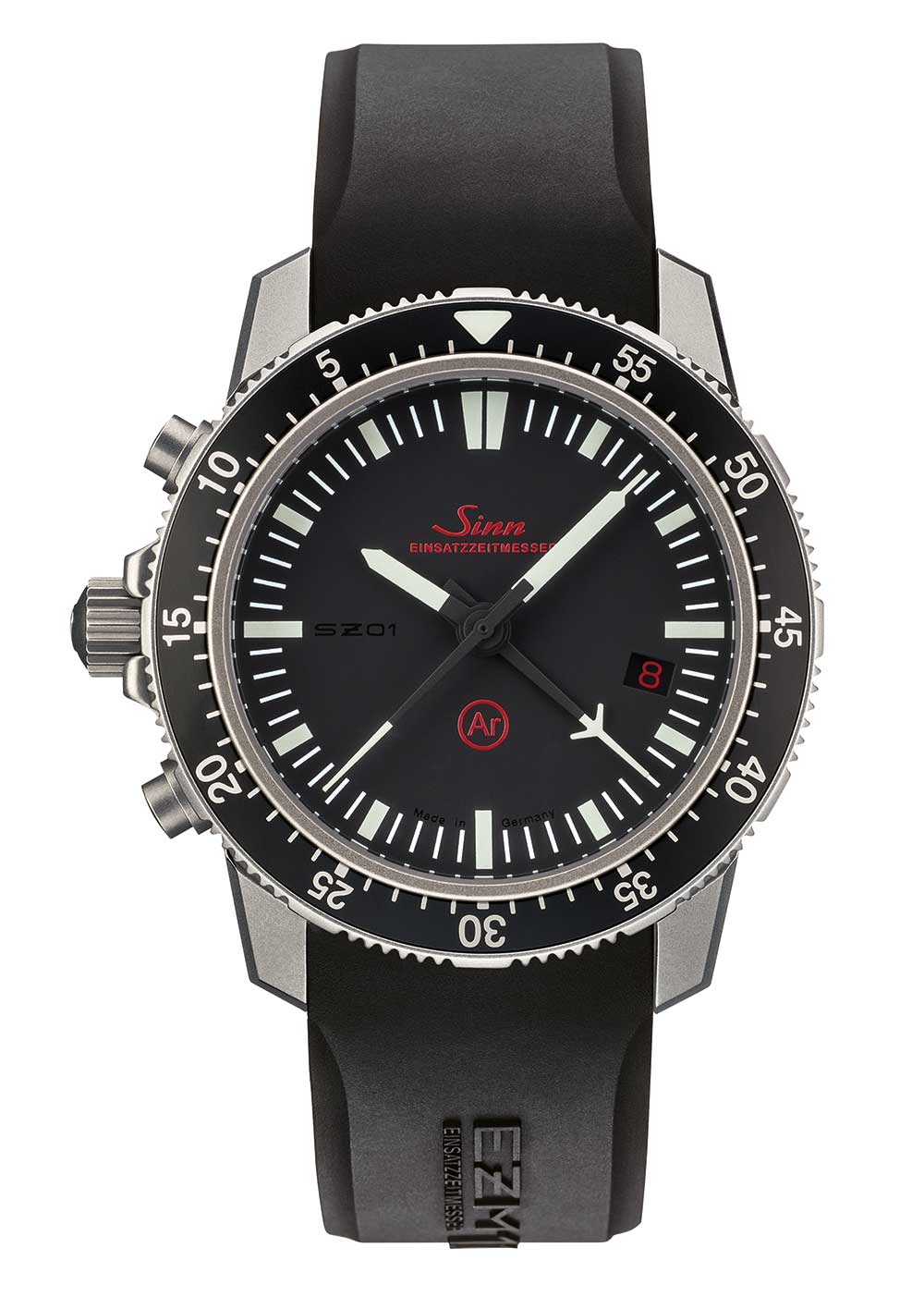 There are a lot of chronographs on the market, but the Sinn EZM 1.1 is refreshingly different because it is designed entirely according to function. Sinn works with several German special forces, such as police commando unit ZUZ (Zentrale Unterstützungsgruppe Zoll), Central Customs Support Group, and commando diver unit KSM (Kommando Spezialkräfte der Marine), and the EZM 1 was originally designed according to their requirements. So the new Sinn EZM 1.1 continues the tradition, with a tough case, and an unusual chronograph arrangement. When the chronograph is not running, there is no continuous seconds display. When you start the chronograph by pressing the pusher at 8 o’clock, the two chronograph hands start running. Both are pivoted at the centre: they are distinguishable through the aircraft symbol that marks the chronograph minutes hand. Sinn say that this system is more intuitive than the usual 30-minute chronograph minute counter, because we are accustomed to seeing 60 minutes distributed over 360°, in other words the whole circumference of a watch or clock dial.

The layout of the pushers and crown is also different with respect to most chronographs. They are on the left, so that when you are wearing the watch they are less liable to get in the way. As the movement is based on the Valjoux 7750, rotated through 180°, the pusher layout is also inverted, with start/stop below, at 8 o’clock, and reset above, at 10 o’clock. 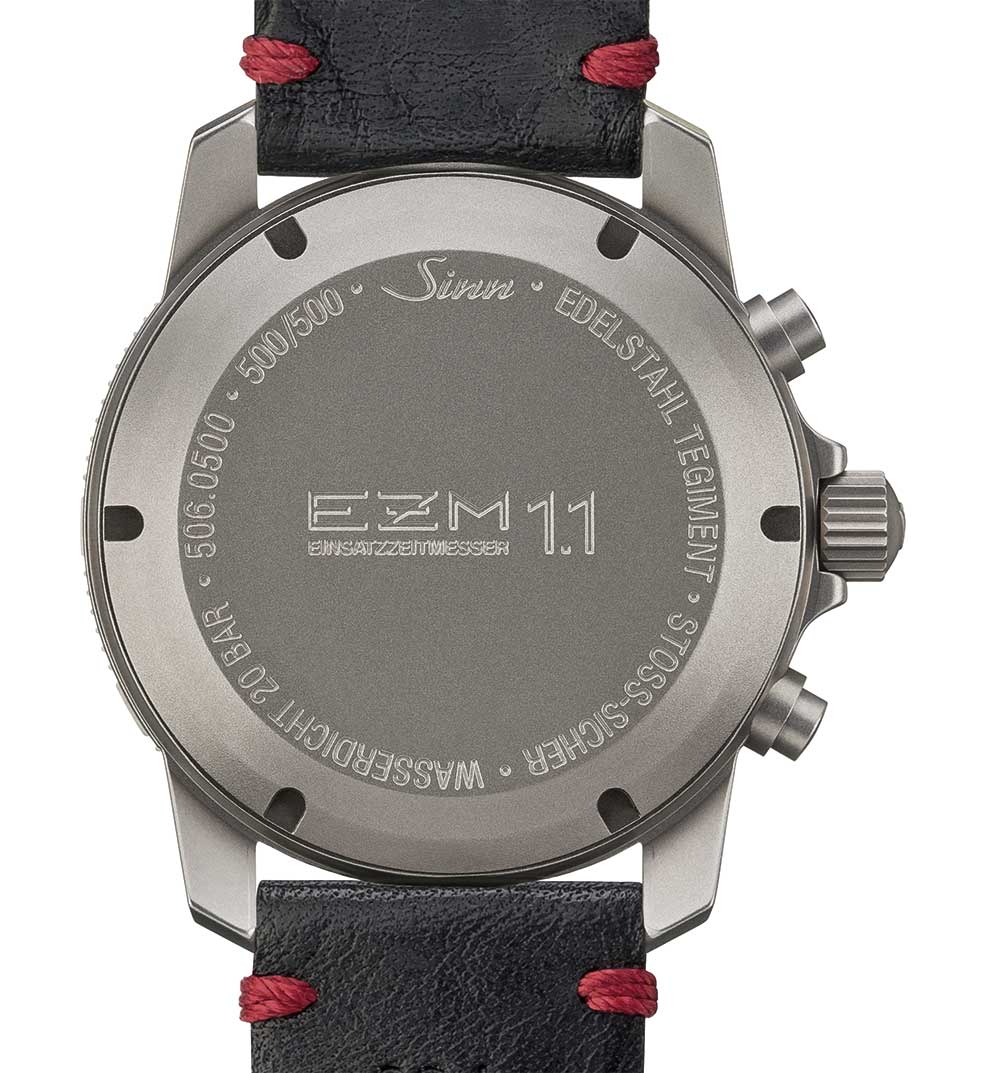 The bezel rotates bi-directionally and can be used for countdowns or other timing functions. It is one-minute ratcheted. The degree to which Sinn care about functional legibility can be gauged from their use of red for everything that is not important: brand name, date, Ar logo. 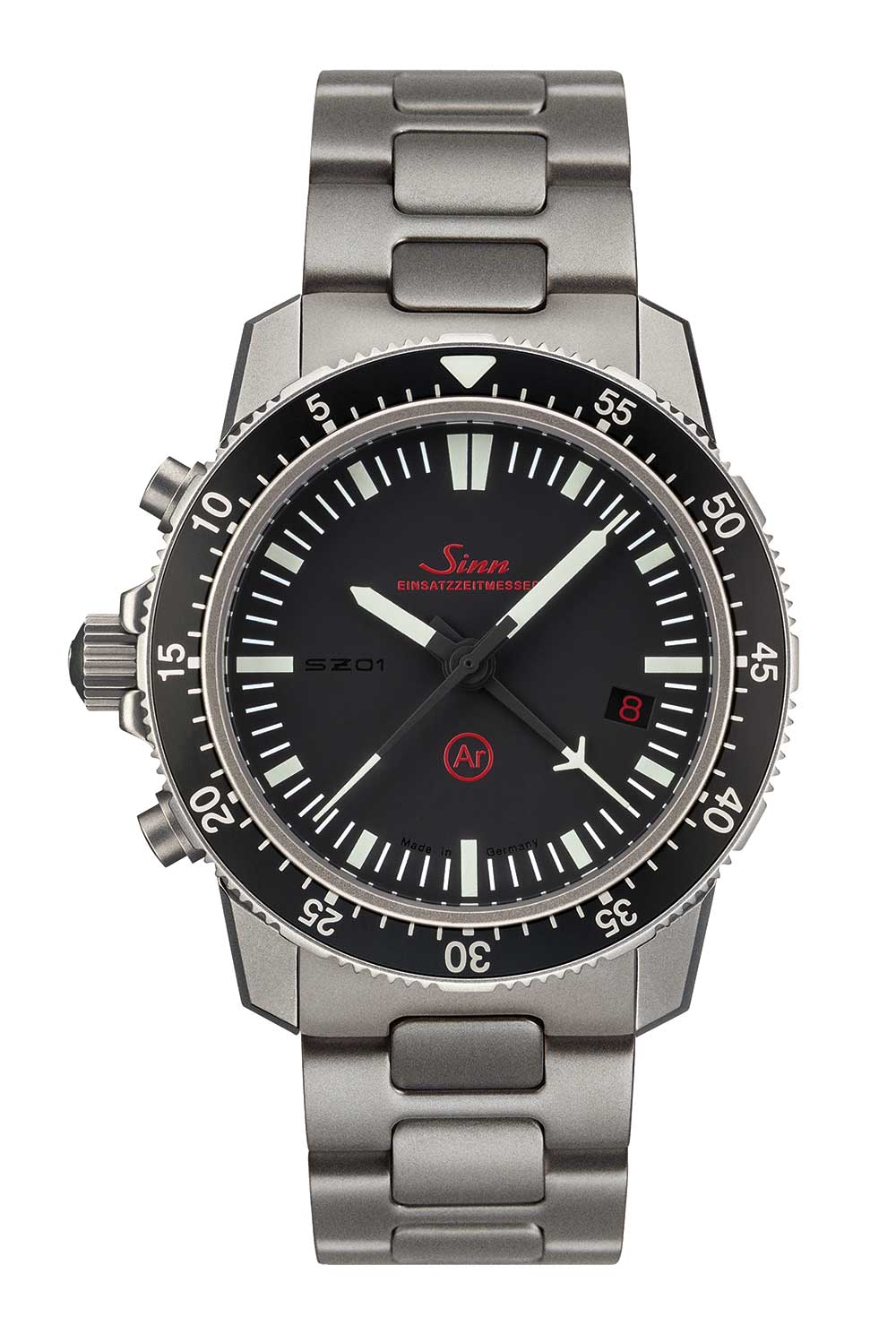 The case of the EZM 1.1 is made of stainless steel, bead-blasted to reduce reflections. It is 43 mm in diameter and 16.4 mm thick, weight 106 grams without strap. As you can see from the profile photo, it’s not a slim dress watch, neither was it intended to be. The watch is supplied with two straps, one in silicone, more functional, and a vintage-style leather strap with red stitching. The silicone strap is long enough to wear the watch over a shirt or jacket sleeve, and it can be adjusted to the desired length by cutting the strap and moving the spring bars. The butterfly clasp has alternative spring bar positions allowing up to 10 mm length adjustment, using the special tool provided in the box. The steel case is specially hardened by Sinn’s Tegiment process, making it extra scratch-resistant. The pushers and crown are mounted using Sinn’s D3-System, in which the respective shafts are mounted directly into the apertures on the case, in other words without the tube insert used in most watches. The D3-System increases protection against moisture and dust.

Another feature of the EZM 1.1 is the Ar-Dehumidifying Technology, designed to absorb any water vapour in the case to prevent condensation and fogging. The watch has a drying capsule, visible from outside the watch on the top right-hand lug. The colour of the capsule shows the degree to which it is saturated, from pale blue up to an intense sky blue, at which it is 100% saturated and ready for replacement. The system reduces the intervals between maintenance operations.

Functional at a range of conditions

The watch is tested for operation from –45°C to +80°C. The case has a pressure resistance of 20 bar, corresponding to 200 metres, and the watch is tested as per the standard DIN 8310. It is also resistant to low pressure. Sinn have designed the luminous markings with care: different to most chronographs, the chronograph seconds and minutes hands are both luminous so that you can see elapsed time in low light conditions. On the bezel, just the reference triangle is luminous, making it more practical for immediately seeing how a countdown is progressing. 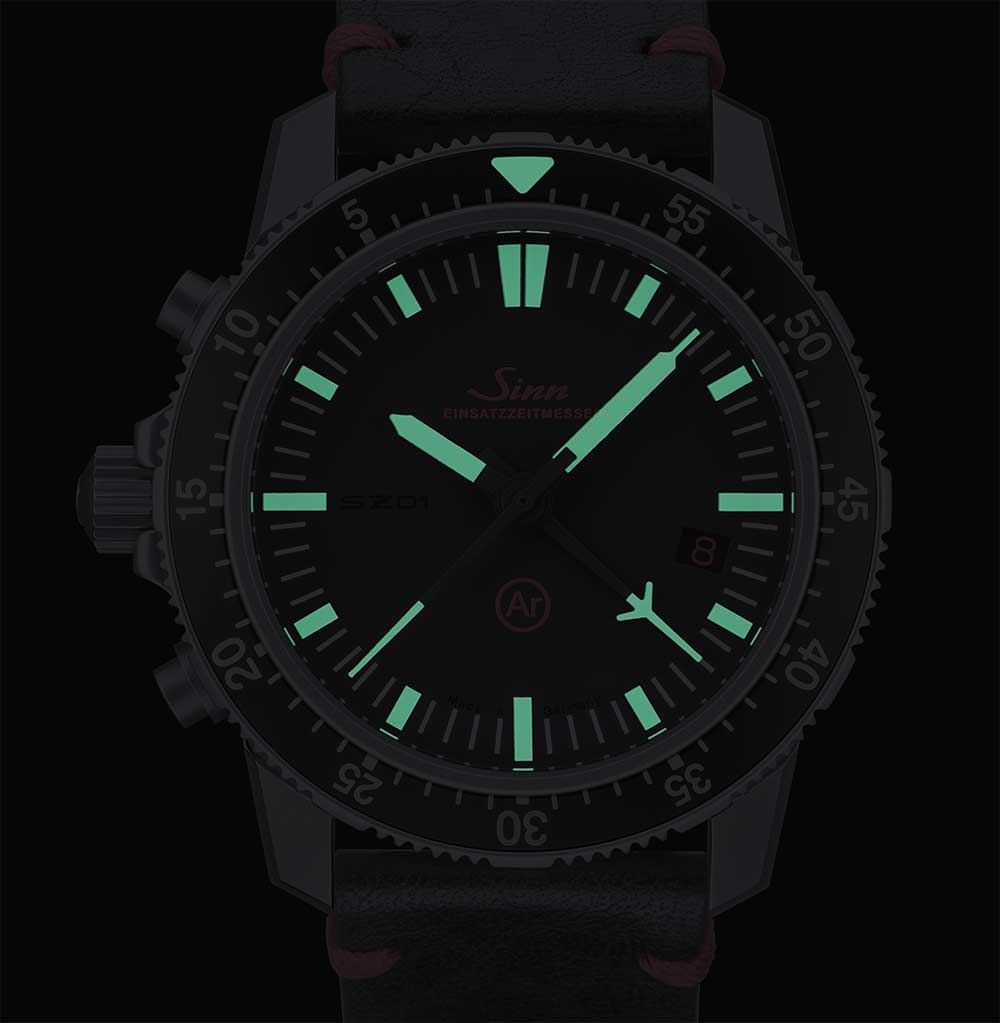 The SZ01 movement is based on the ETA Valjoux 7750, but its inspiration is another movement that Sinn used for several watches: the Lemania 5100. This movement was designed in the late 1970s as a cheap, functional, tough chronograph movement, with central chronograph seconds and minutes. The Swatch Group absorbed Lemania in 1999, and a few years later, the Lemania 5100 was discontinued. So Sinn have to customize the Valjoux 7750 to provide the principal characteristic of the Lemania 5100. The movement runs at 28,800 vibrations per hour, 4 Hertz, power reserve approximately 42 hours. It has a screw-down crown. Unscrewing the crown to the first position enables you to manually wind the watch if necessary. The second position is for rapid date change (don’t use between 9pm and 3am), the third position is for adjusting time, with the stop second function, even though in this watch, with no running seconds, it can’t be used in practice. 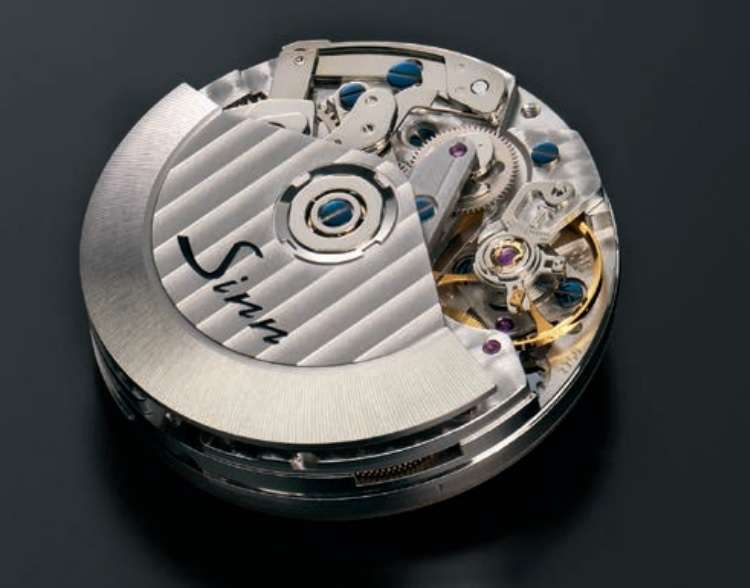 The Sinn EZM 1.1 mission timer chronograph is reference 506.010. It costs €4,850 inclusive of VAT. It is supplied in a box with leather and silicone straps, a strap replacement tool, spare spring bars, and a leaflet. It can be purchased online at the Sinn website, delivery time 5-7 days in Germany, 1-2 weeks in other countries. 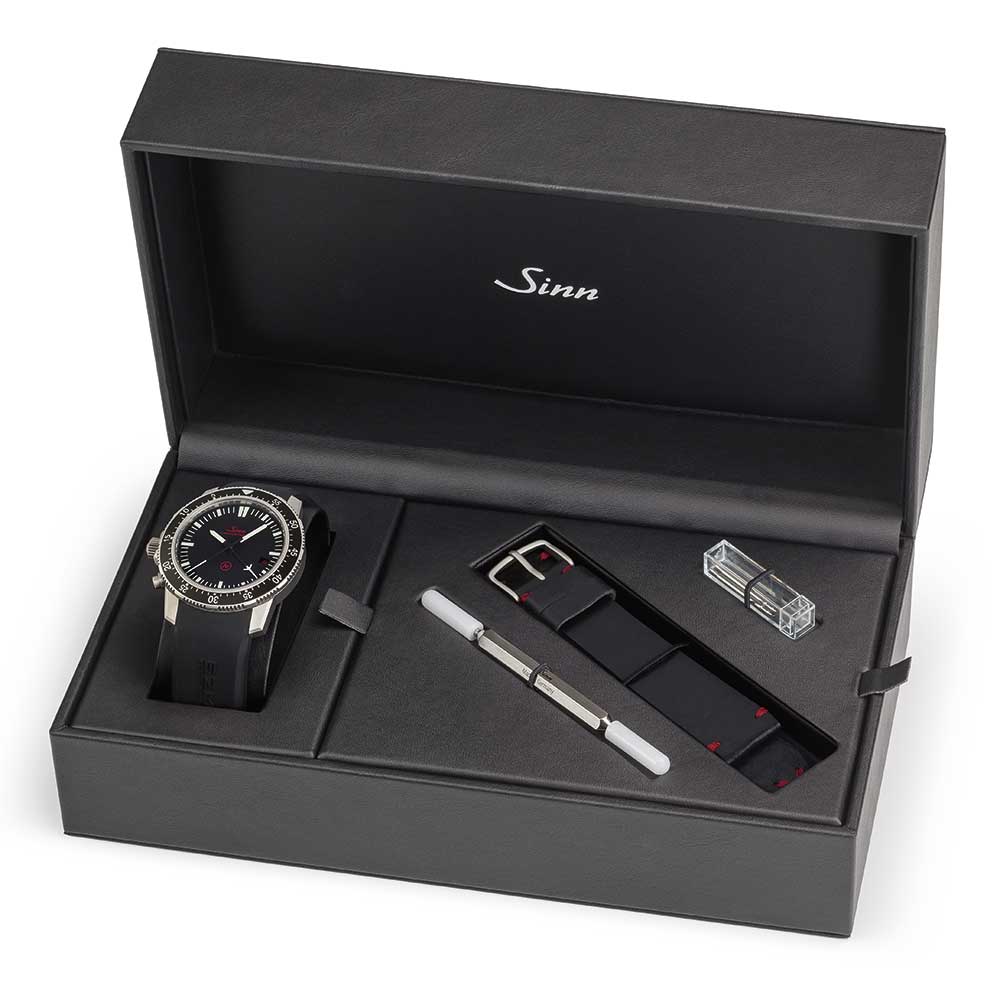 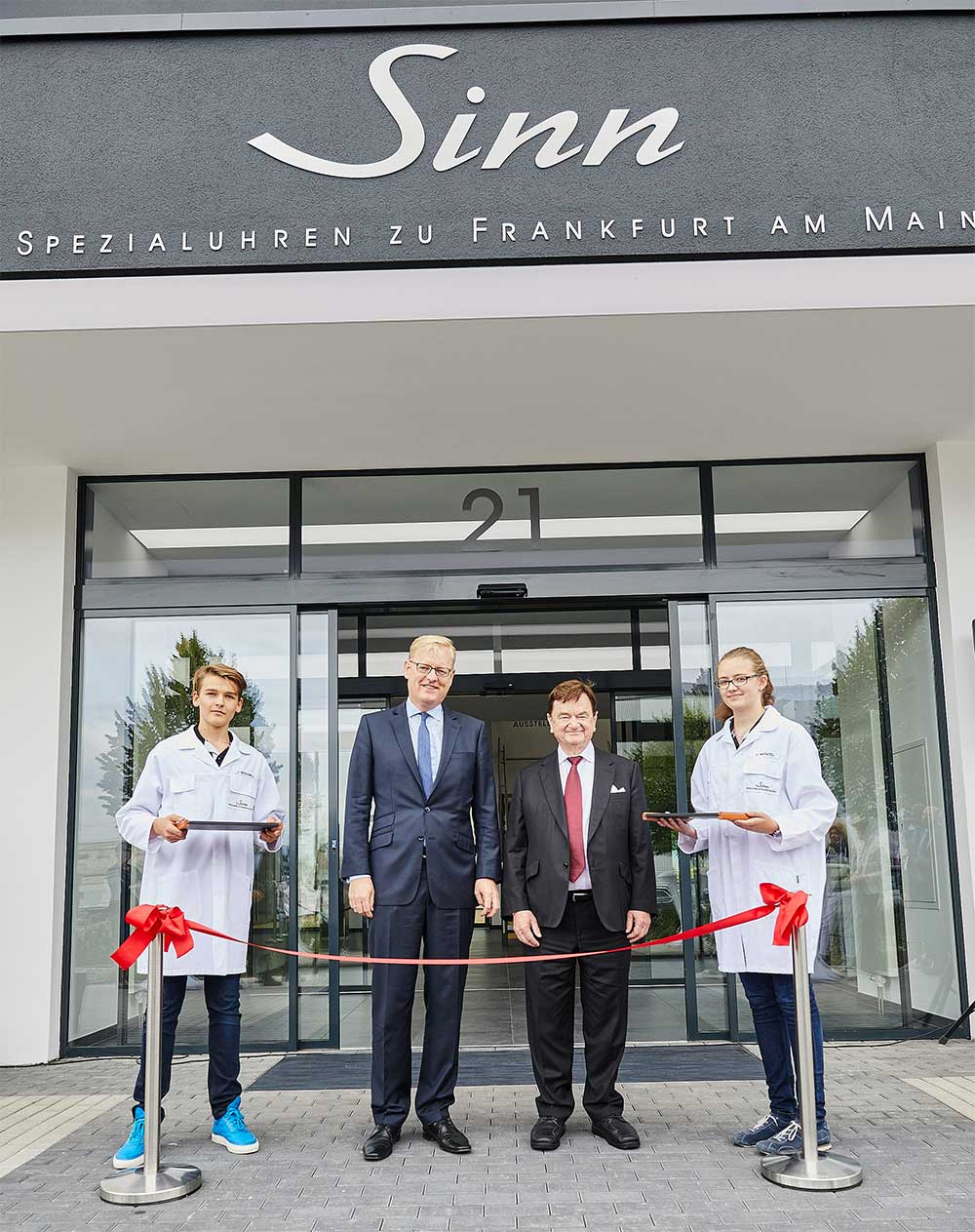