For ten years now, Hermès have been combining their French DNA with Swiss watchmaking, and their watches include complications that provide an alternative, ironic depiction of time. The Hermès vision is not about performance and the absolute control of time, but rather a more playful view of this fourth dimension. In 2011, Arceau Le temps suspendu enabled you to forget about the passage of time, by pressing a pusher at 9 o’clock, putting the hour and minute hands into an impossible V-shaped configuration either side of the numeral 12. In 2014, it was Dressage L’heure masquée, in which the hour hand hides under the minutes hand, and can only be seen in its conventional position by pressing a pusher in the crown. The watches reflect Hermès’ visual codes of the moment and so they are all very different in terms of graphic design. 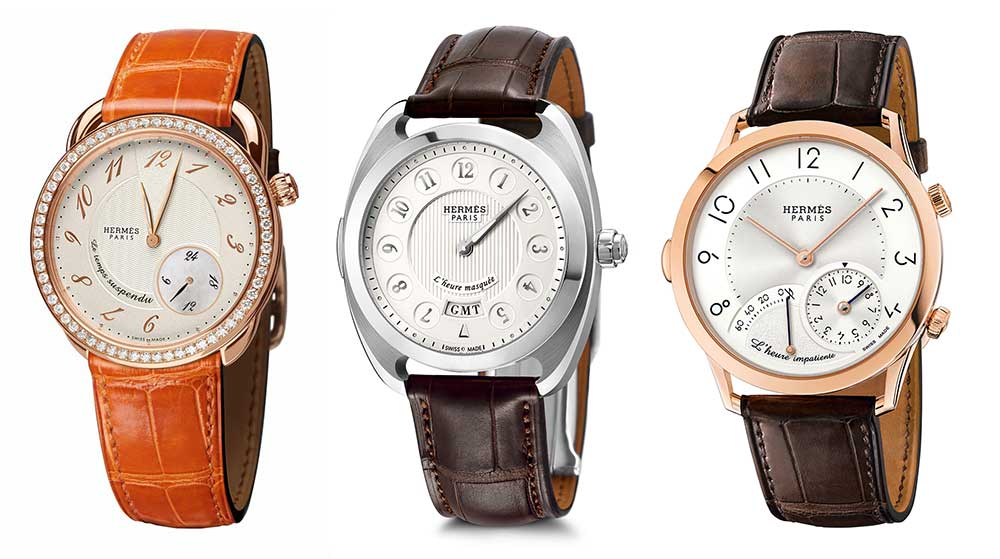 This year, Slim d’Hermès L’heure impatiente looks at the human dimension of time, and how it seems to pass rapidly or slowly according to what we are doing. We are all familiar with time racing by all too quickly when we are doing something enjoyable, and the way that it seems to slow down when we are impatiently waiting for a certain event. L’heure impatiente depicts an hour-long thrill of expectation, and in his presentation of L’heure impatiente, Philippe Delhotel, Artistic Director at La Montre Hermès, quoted French statesman Georges Clemenceau: “Le meilleur moment de l’amour, c’est quand on monte l’escalier” (The best moment of love is when you are going up the stairs). I don’t agree, but I get the point. 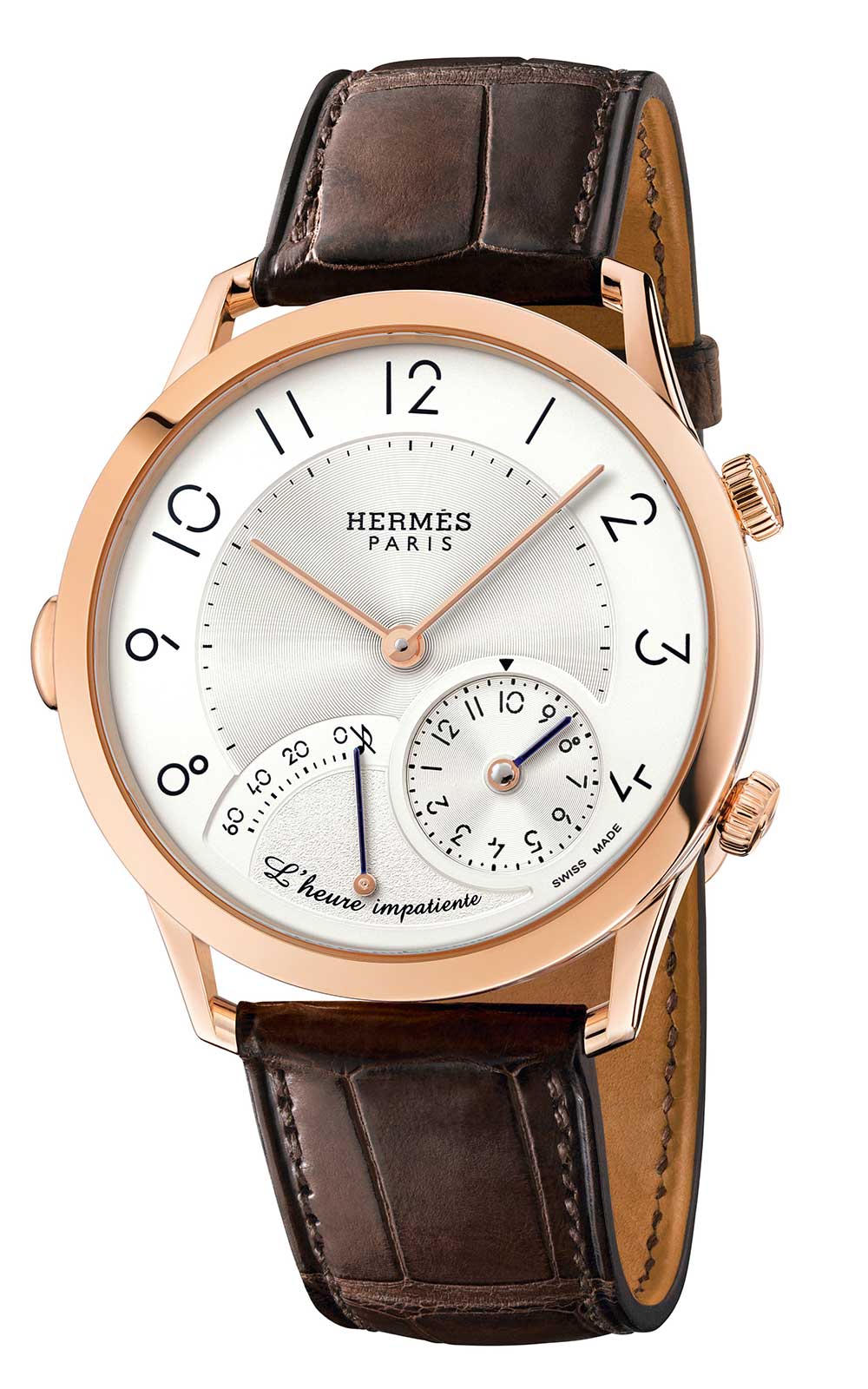 The watch is simple to use. With the crown at 4 o’clock, you set the event that you are looking forward to, which can be up to 12 hours away, by means of the subdial at bottom right. Rotating the crown moves the blued hand, and you can set it to any time, not necessarily on the hour. You press the pusher at 9 o’clock to prime the watch. This links the blued hand to the subdial, which is in fact a rotating disc, and the two rotate together towards the triangular index. Exactly one hour before the event, the hand at bottom left starts the countdown from 60 to zero, while the subdial at bottom right continues its slow rotation. When the hand on the left has reached zero, and the disc with the blued hand has reached the triangular indicator, the watch sounds a single chime, not loud, not an alarm, but a pleasant note lasting about 1.5 seconds. The timepiece is like a mechanical hour-glass, showing the passage of an hour in two different ways, on the one-hour retrograde scale, and the 12.-hour disc. 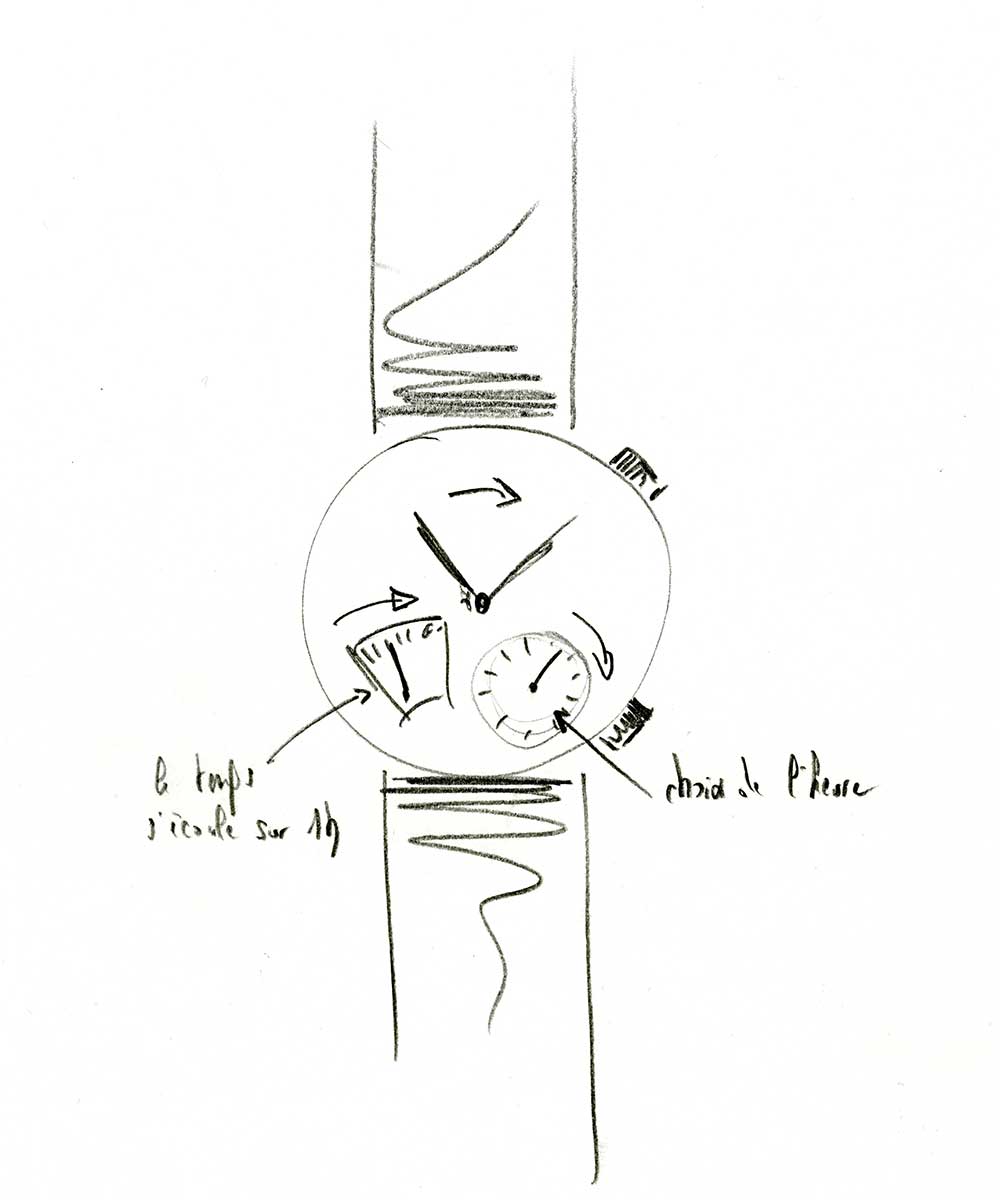 The concept was born in Basel in 2012, and the initial sketch made at that time was very similar to the final product. It was translated into a mechanical movement by Jean-Marc Wiederrecht, who designed a 2.2-millimetre module fitted above the existing Hermès H1912 movement. The watch had to be slim – because it is part of the Slim collection – and so the watchglass and sapphire caseback are thinner than usual. The dial is 1 mm thick, and it is not in contact with the case, to enhance its resonance when the gong is struck, improving sound volume and quality. It is easily audible but very much a personal sound: the user can hear it, but not people on the other side of the room. 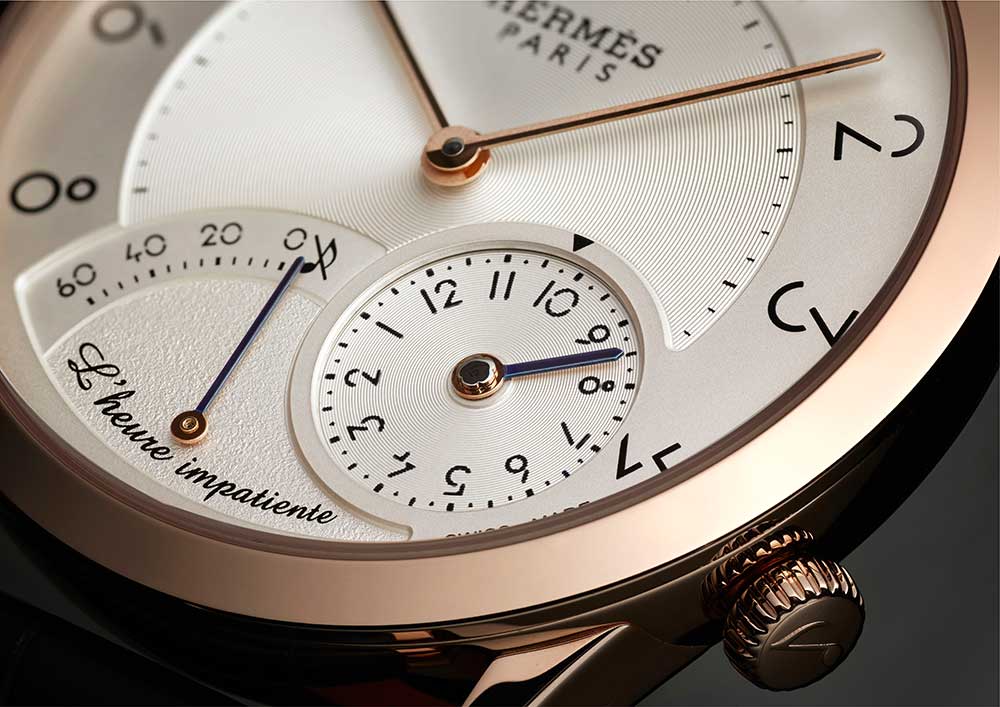 The “Impatient Hour” module is wider than the H1912 movement, and it includes a couple of whimsical touches, perfectly attuned to the Hermès approach to watchmaking. In the photo below you can see the helical spring that gradually accumulates energy over the course of one hour. There are two fundamental components in Jean-Marc Wiederrecht’s design, a complex lever that rotates around a central pivot, and a pointed cam on a rotor that triggers the release of the spring’s energy, which powers the hammer that strikes the gong. As the components are laser-cut, Jean-Marc thought, let’s make something more attractive, and so the lever is in the shape of the winged horse Pegasus (part of Hermès imagery), and the rotor with the pointed cam is like a shark. Nothing of all this can be seen through the caseback. The gong is also unusually-shaped, with a rectangular section whose proportions change at the two extremities. 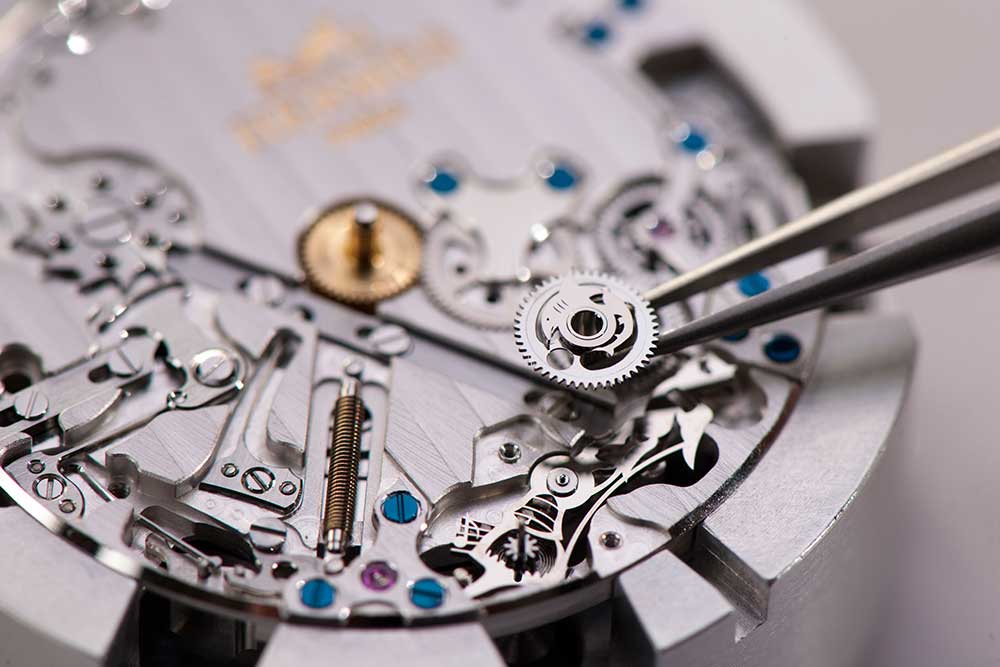 The base movement, made by Vaucher, runs at 28,800 vibrations per hour, 4 Hertz, and is self-winding, with a power reserve of 42 hours. The oscillating weight and bridges are decorated with the Hermès signature H-pattern. The watch is 40.5 mm in diameter, with a rose gold case, water resistance 3 bar. The dial design has all the features of the Slim collection, with the original typeface designed by Philippe Apeloig. The watch has a hand-stitched blue alligator strap, made in-house by Hermès. 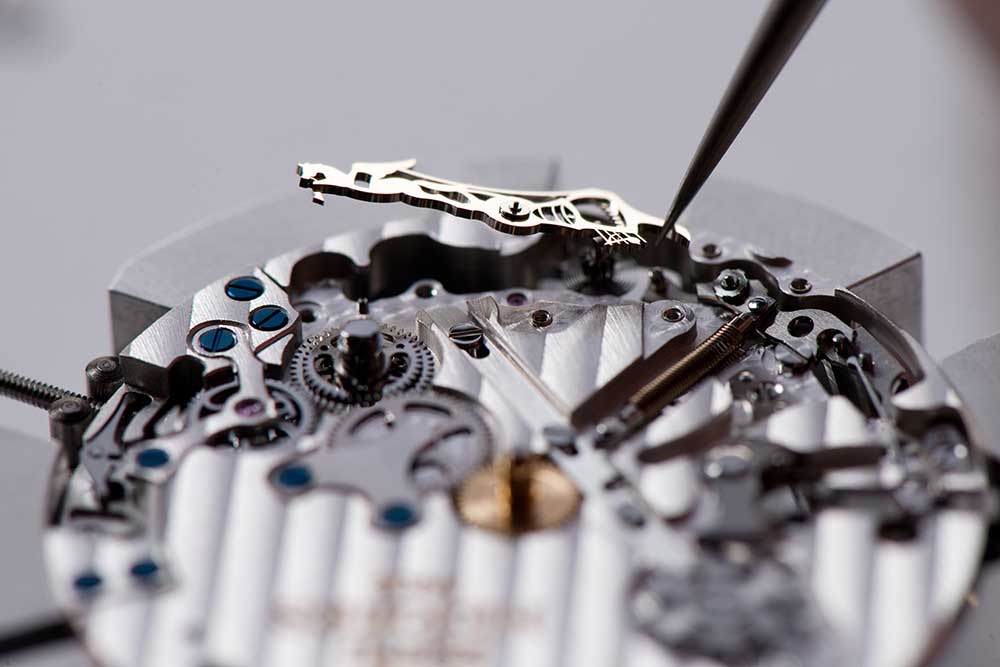 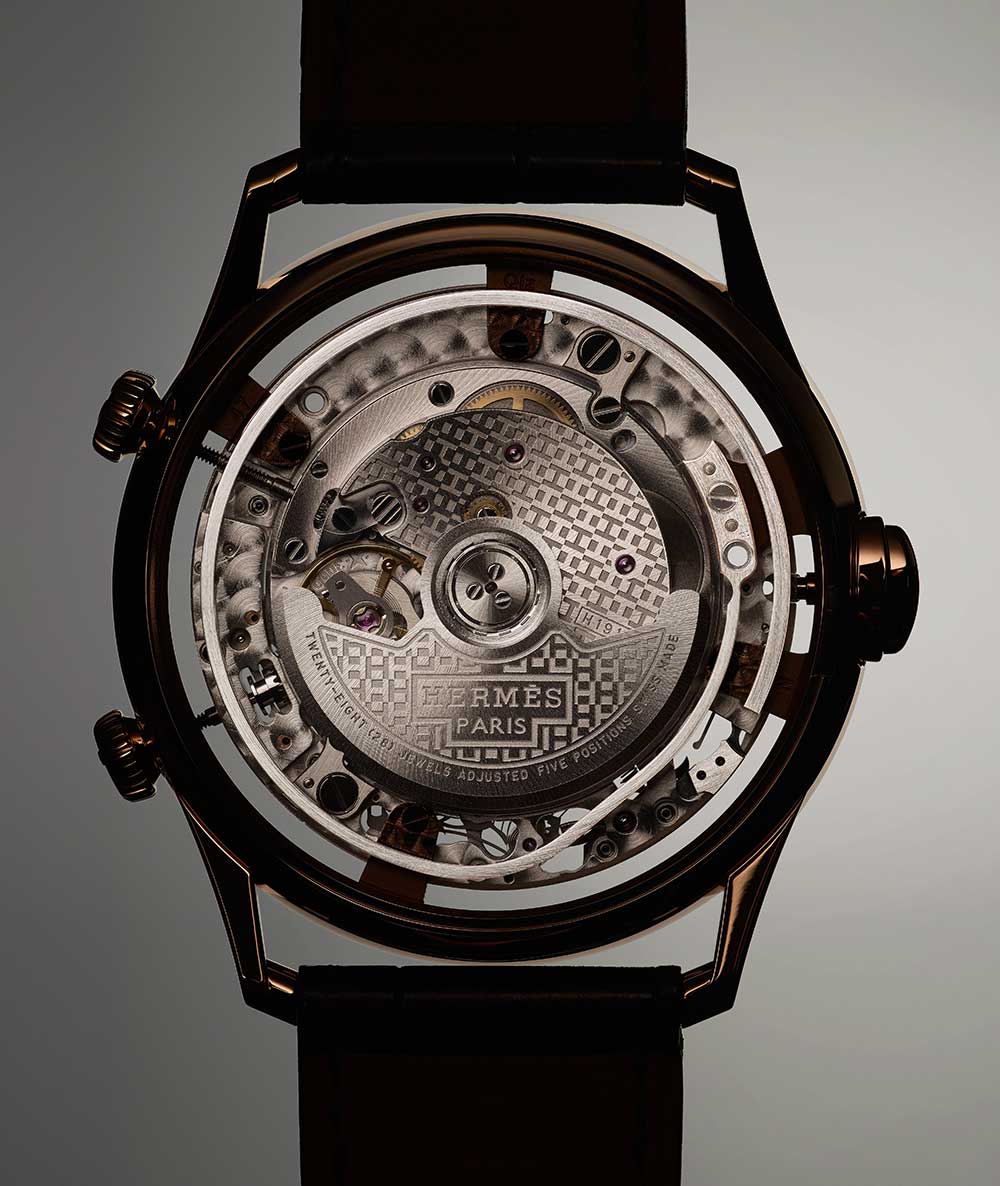