The distinctive feature of the Blancpain Tribute to Fifty Fathoms MIL-SPEC diving watch is the water-tightness indicator that appears on the dial. It may seem like an act of courage on the part of Blancpain – after all, surely the point of a diving watch is that you can safely take it underwater knowing that not a drop of water is going to get in – but in fact it is a tribute to Jean-Jacques Fiechter, CEO of Blancpain from 1950 to 1980 and himself a keen amateur diver. 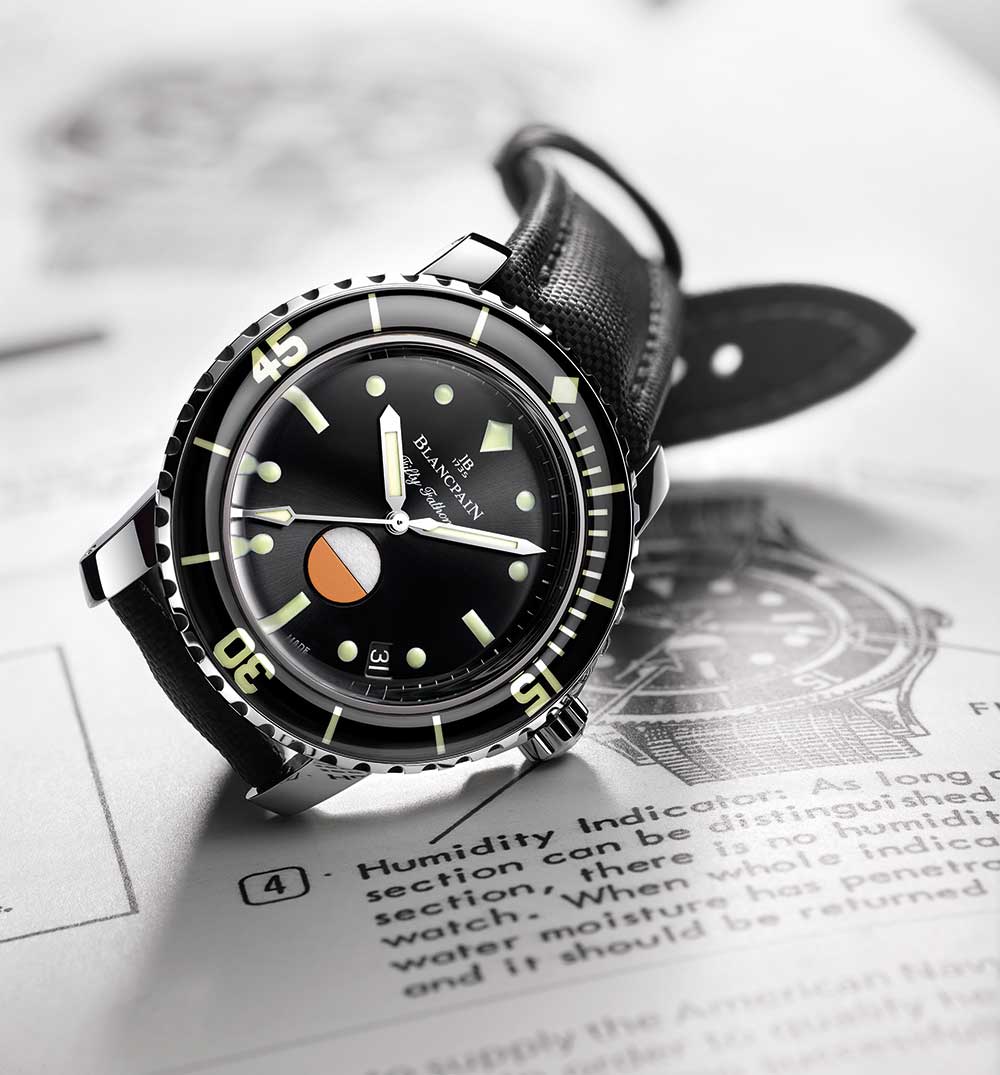 In the early 1950s, Fiechter and his team at Blancpain had already identified the key needs for a diver’s watch. First, water resistance, solved by means of a double-sealed crown that prevented water penetration even in the case that the crown were accidentally pulled out during a dive, and a more secure O-ring for the caseback. Second, the unidirectional bezel that enables the diver to see how long he or she has been underwater. These were features that Blancpain patented and that became part of the diving watches, named Fifty Fathoms, that they supplied to the French combat swimmers corps. A few years later, Fiechter introduced another feature, the water-tightness indicator, a disc at 6 o’clock which changed from white to red if water leaked into the watch. In those years, such watches were real tool watches, actually used by divers, and so you can understand Fiechter’s obsession with safety. The new device became part of the Fifty Fathoms MIL-SPEC 1 introduced in 1958 to military specifications, and used by American military divers. 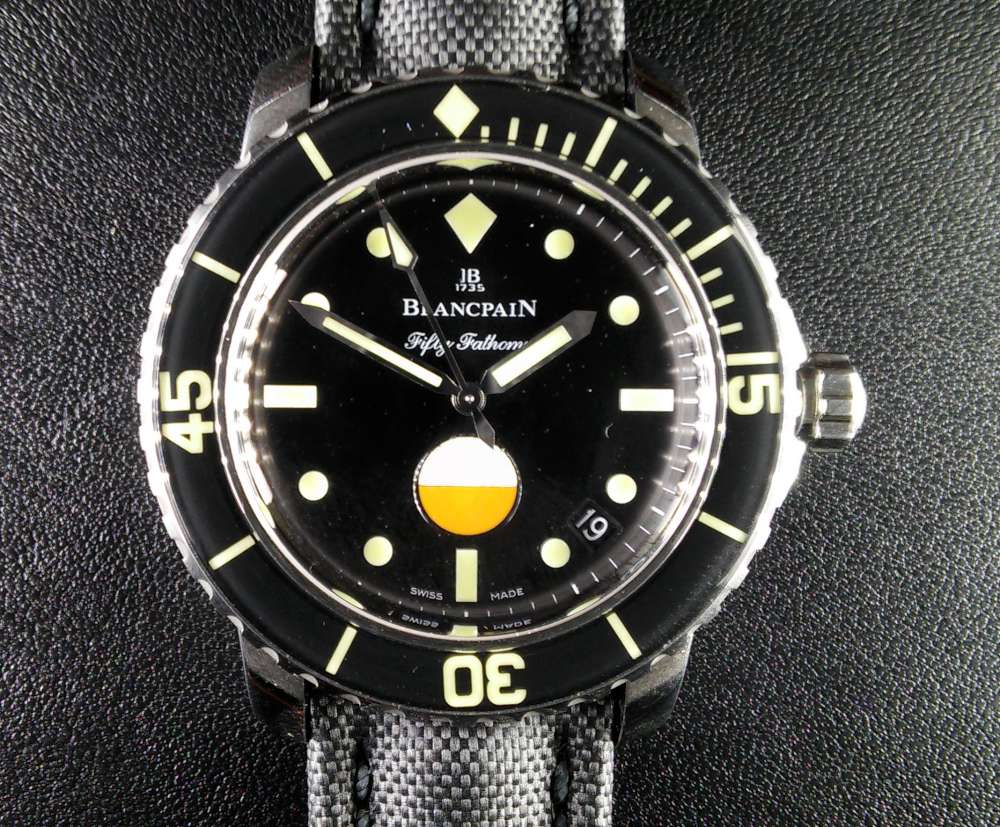 The Tribute to Fifty Fathoms MIL-SPEC has all the features of a diver’s watch. The black dial has hour indices coated in SuperLuminova, and the distinctive water-tightness indicator. The unidirectional rotating bezel is coated in scratch-resistant sapphire, a Blancpain feature first introduced in 2003. The luminescent bezel markings are thus protected. Its rounded profile and deep, large-scale fluting gives the watch a distinctive appearance. There are just two things on the dial that are not totally “diver’s,” the date window at 4.30, and the hour and minute hands, which are rather similar, even though the strip of SuperLuminova is slightly wider on the hour hand. Usually the hour hand of a diver’s watch is made markedly different to ensure that there is no chance of getting it mixed up with the minute hand, which is the really important hand for dive time calculation. The water-tightness indicator is a visually dominant feature, you either like it or you don’t. In the latter case the regular Fifty Fathoms offers the perfect alternative. If water gets into the watch, the white part of the indicator turns orange, matching the other side. The dial has a slight depression for the indicator, which itself is like a pastille, so presumably some sort of chemical that changes colour in the presence of humidity. 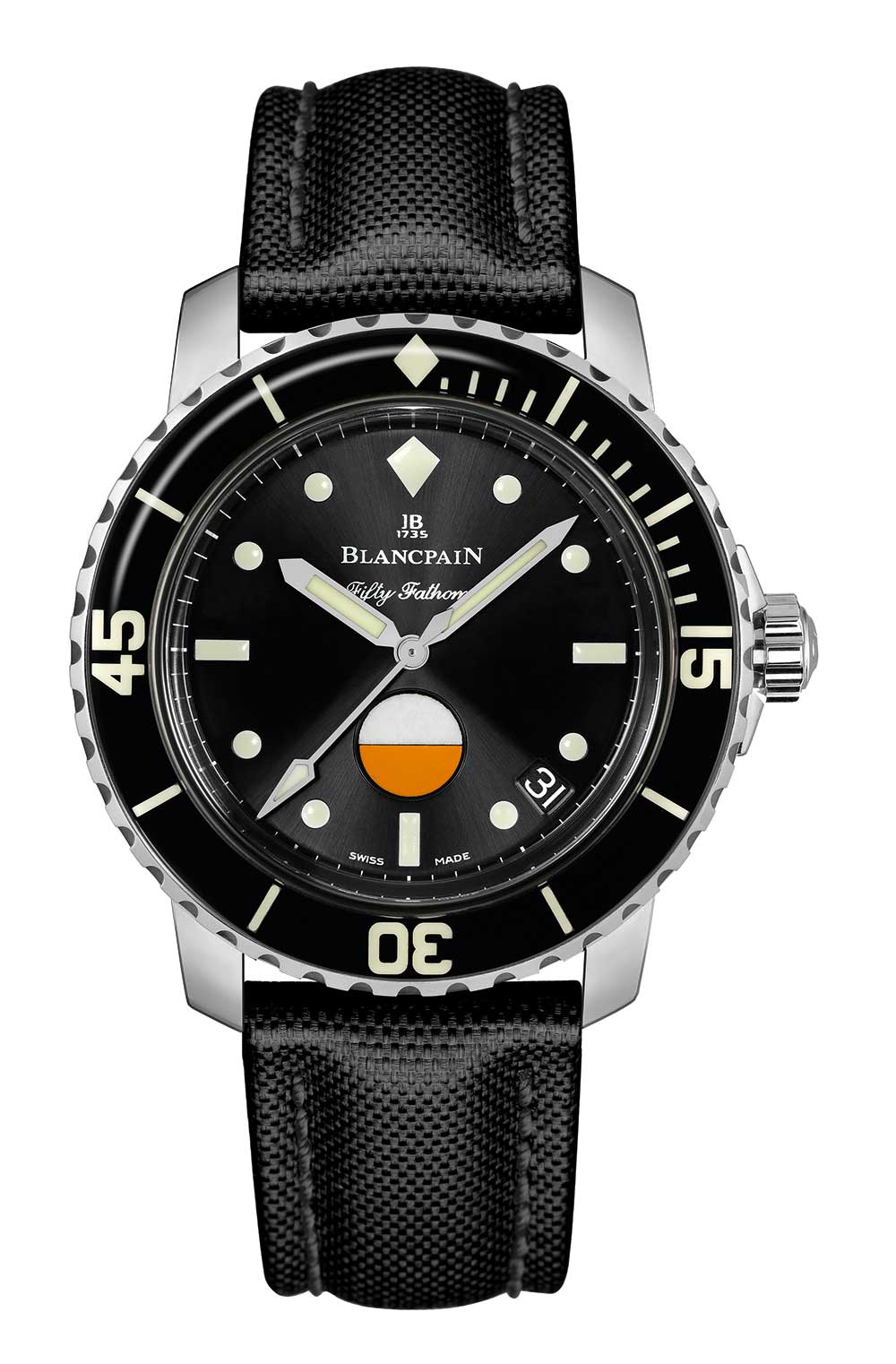 The case is 40.3 mm in diameter and 13.23 mm thick, very wearable as is required of a luxury diver’s watch. It is water-resistant to 30 bars, 300 metres. The strap options include a NATO strap, a sail cloth strap, or a steel bracelet.

The sapphire caseback reveals the Blancpain in-house self-winding calibre 1151, which has two mainspring barrels that provide a four-day power reserve, 96 hours. The oscillating weight is in gold with a NAC platinum alloy coating. The balance spring is in silicon, which is anti-magnetic, and less subject to shock due to its lower density. 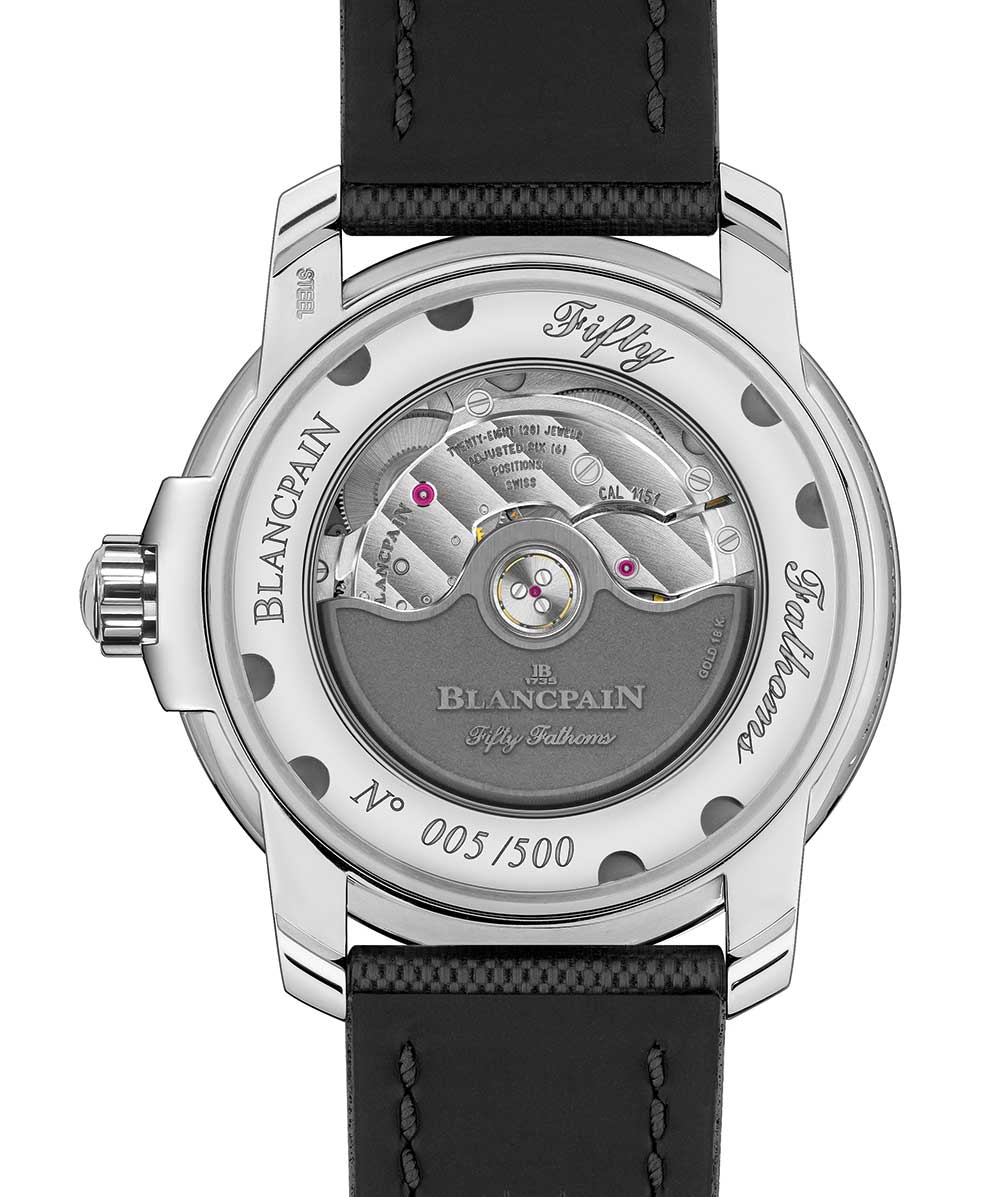