IWC Schaffhausen is celebrating its 150th anniversary with this interesting watch, IWC Tribute to Pallweber, based on pieces in their historic collection. In addition to three wristwatch variants, it is also available as a pocket watch. They are all limited editions. Both the new Tribute to Pallweber and the original pocket watches that were made from 1884 to 1890 have a digital display for hours and minutes, giving them a minimalist look. The two windows are labelled Hours and Minutes, as a tribute to the Boston watchmaker Florentine Ariosto Jones who founded the International Watch Co. in Schaffhausen in 1868. 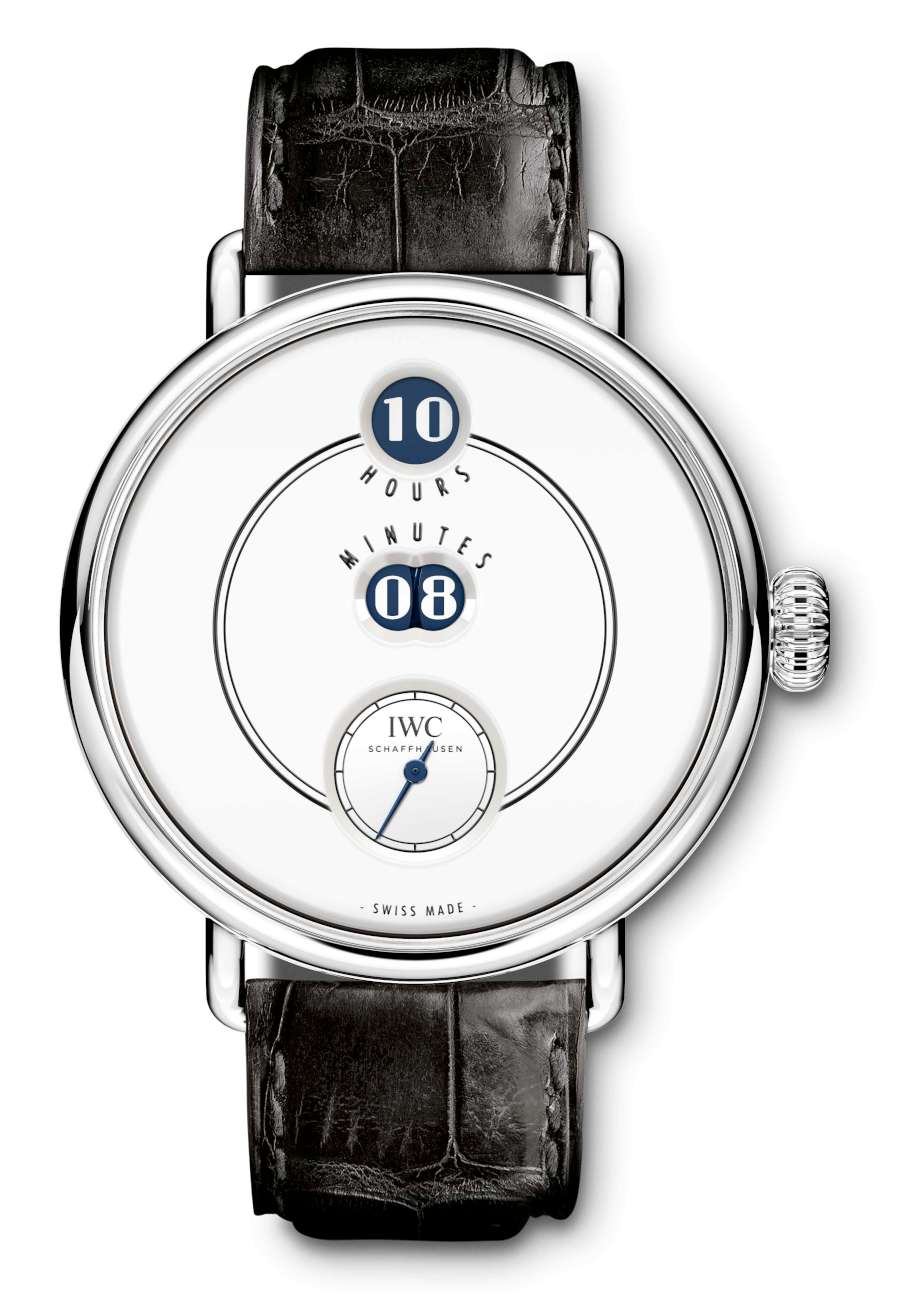 The historic watches were based on a design by Austrian watchmaker Josef Pallweber, who patented it in 1883 and licensed it to IWC. A few other brands used his invention as well, but it wasn’t a massive commercial success back then and Pallweber’s invention substantially disappeared from the watchmaking scene. Today, digital watches include the A. Lange & Söhne Zeitwerk, and François-Paul Journe’s Vagabondage trilogy. Trademark rights to the name Josef Pallweber were purchased in 2010 and the name has reappeared in the form of a new brand founded by Marc Baltensweiler, based in Meilen, Switzerland, making mechanical watches with jumping hour displays. 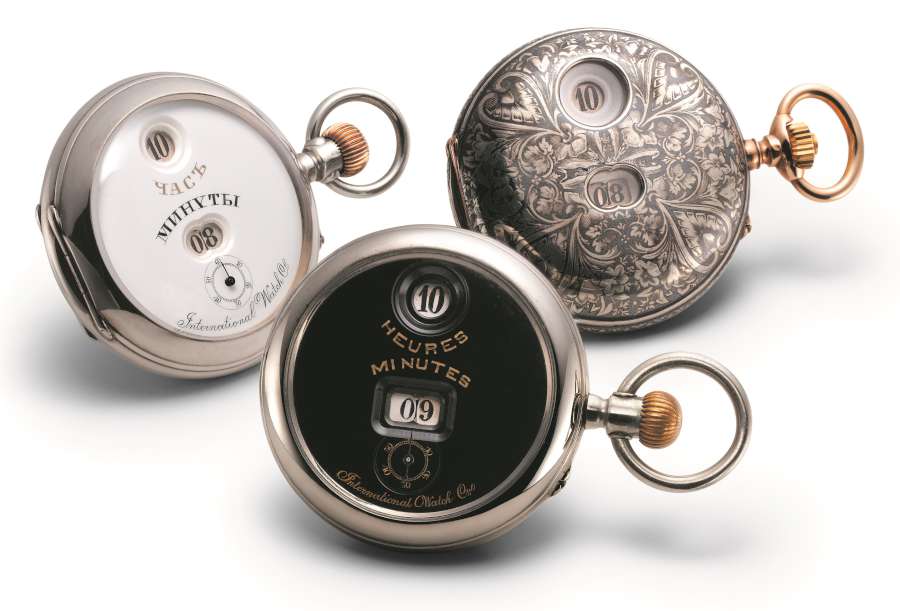 The Tribute to Pallweber watches are powered by the in-house 94200 calibre, which has two wheel trains, one for timekeeping, and one providing the power to move the single-minute disc. Differently to a conventional watch with hands, the energy requirements of this type of display change from one moment to the next, with peaks every minute, ten minutes and hour, particularly at the latter instant when the three discs move together instantaneously. Separating the two flows of power ensures that these variations in absorption don’t affect time-keeping. It also increases the power reserve, which reaches 60 hours. The time can be adjusted forwards or backwards using the crown. 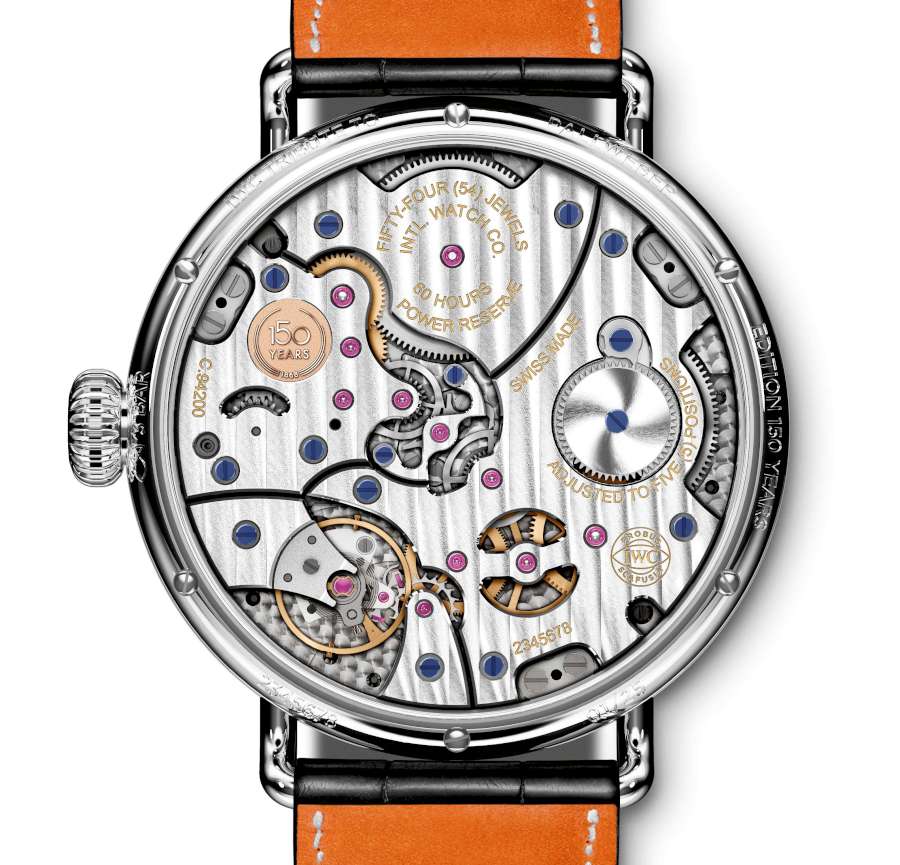 The IWC Tribute to Pallweber is large at 45 mm, fairly slim at 12 mm, with enamel dial in blue or white according to the version. The dial is striking for its minimalism, and the fonts used for the numbers and lettering make this a unique piece. The watches have alligator straps made by Italian leatherwear brand Santoni, with their signature orange linings. Water resistance is 3 bar. 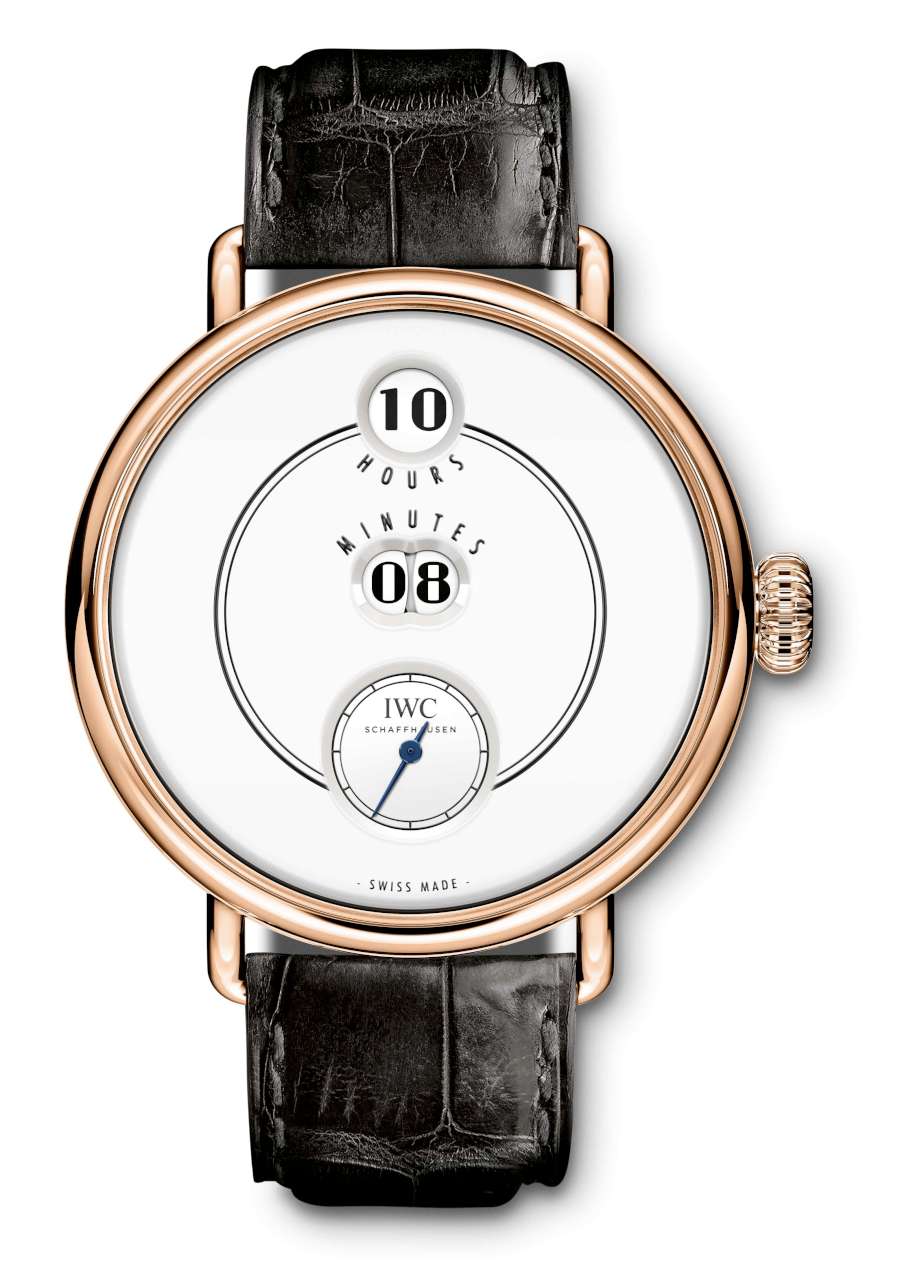 The hand-wound calibre 94200 movement is visible through the sapphire caseback, and it is decorated with a Jubilee medallion in 18-carat gold. The movement runs at 28,800 vibrations per hour, 4 Hertz, and it has 54 jewels. 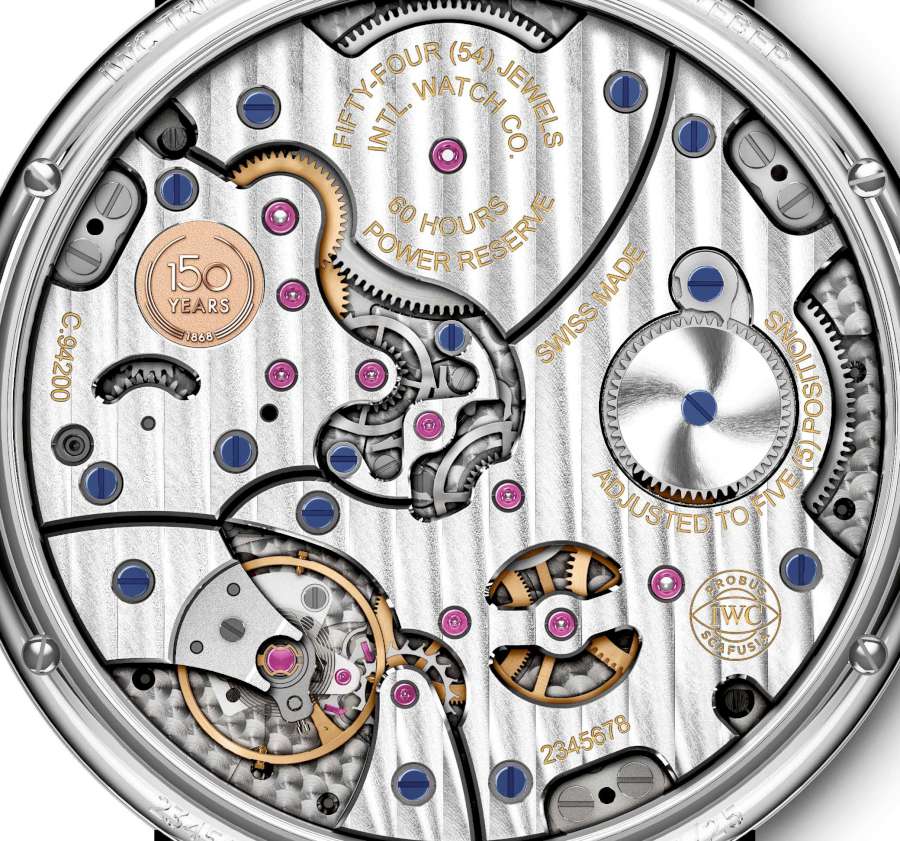 IWC Tribute to Pallweber Edition 150 Years, detail of the movement 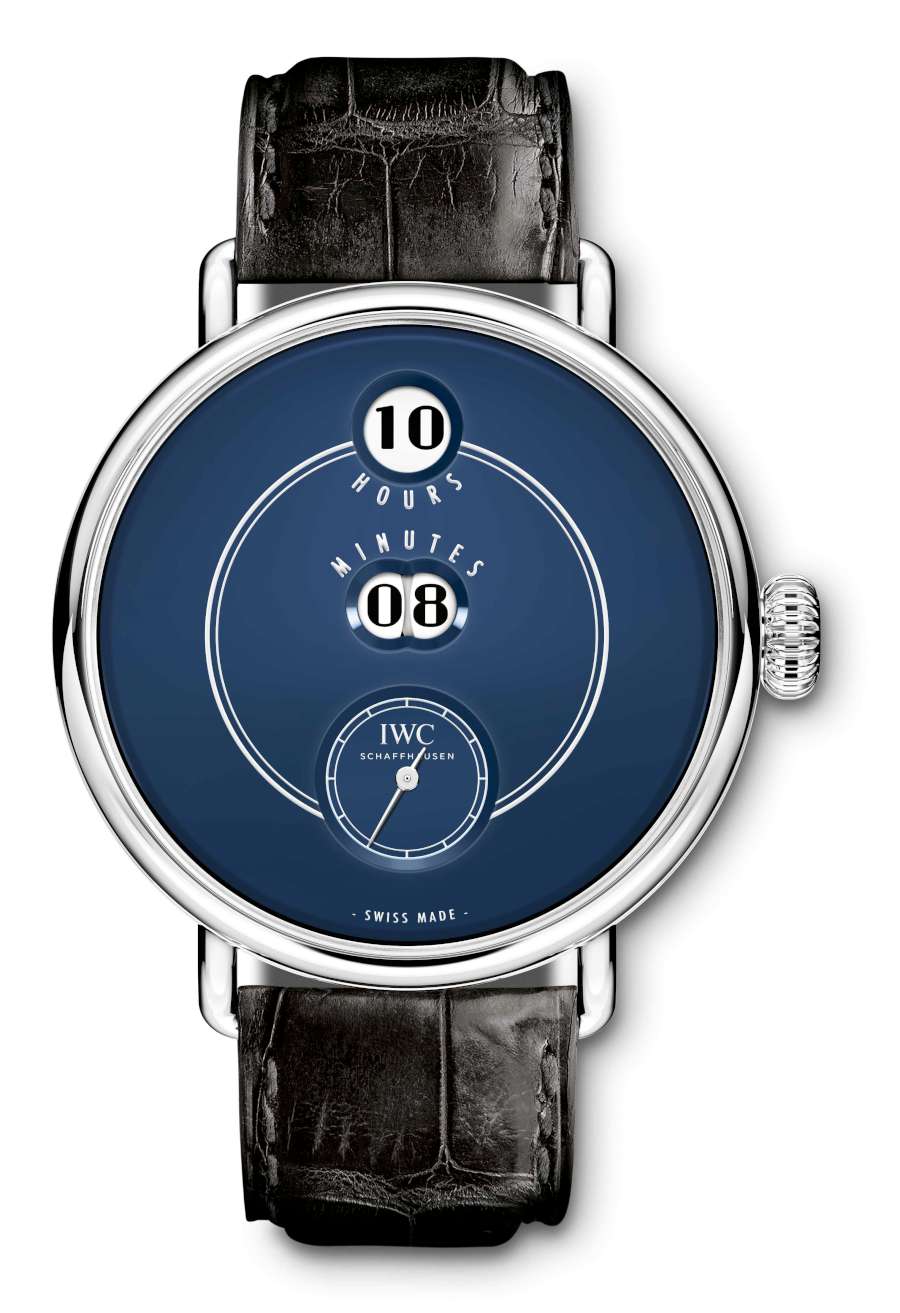 The anniversary collection also includes reference IW505101, a pocket watch with a red gold case with a spring-loaded cover with elaborate guilloché and two windows so that you can read the time when it is closed. There is another cover for the caseback. The watch uses the same 94200 movement as the wristwatch versions. It is 52 mm in diameter and 14.2 mm thick, with a water resistance of 1 bar.
The IWC Tribute to Pallweber pocket watch, reference IW505101, is a limited edition of 50 pieces, price €67,400. More information from the IWC website. 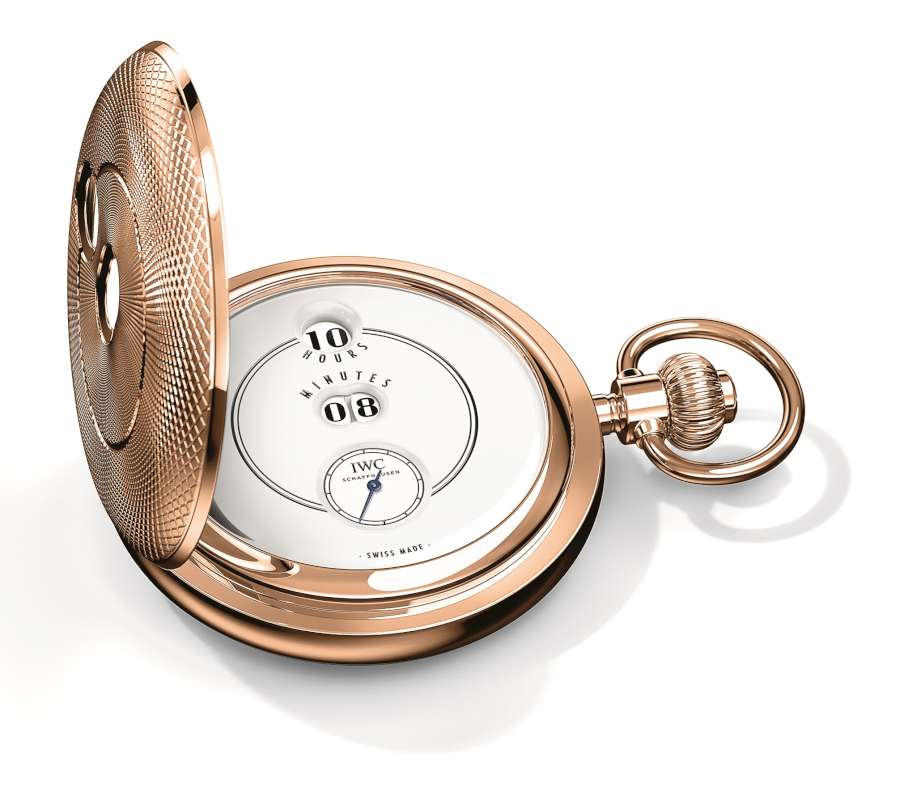 The pocket watch version of the Pallweber, reference IW505101

The IWC Tribute to Pallweber watches are attractive pieces that resuscitate an old idea, giving it an entirely new movement that presumably incorporates a lot of design effort. But I can’t help noting that for this very important anniversary, 150 years, IWC decided to look back into their archives and create a new version of an old watch. This doesn’t meant that they’re not capable of creating new designs, but just reflects the macro-trend towards archive-based watches. It’s probably true that today just as back in 1884, real innovation in watchmaking often comes from independent watchmakers such as François-Paul Journe, Christophe Claret, Vincent Calabrese and many others.