The 1858 collection by Montblanc is developing very nicely, with its pilot’s inspired automatics and chronographs, and its creative use of colours and materials. The most striking piece shown by Montblanc at SIHH was this gigantic 1858 Pocket Watch Limited Edition 100, a 60mm watch, 20.8 mm thick. The two still photos provided by Montblanc don’t do justice to the size and beauty of the piece at the show, and so I have posted a short video in which I’ve left the original audio because in addition to its size, it also has a notable audio presence. You can hear it ticking even in the noisy booth (at least with headphones). 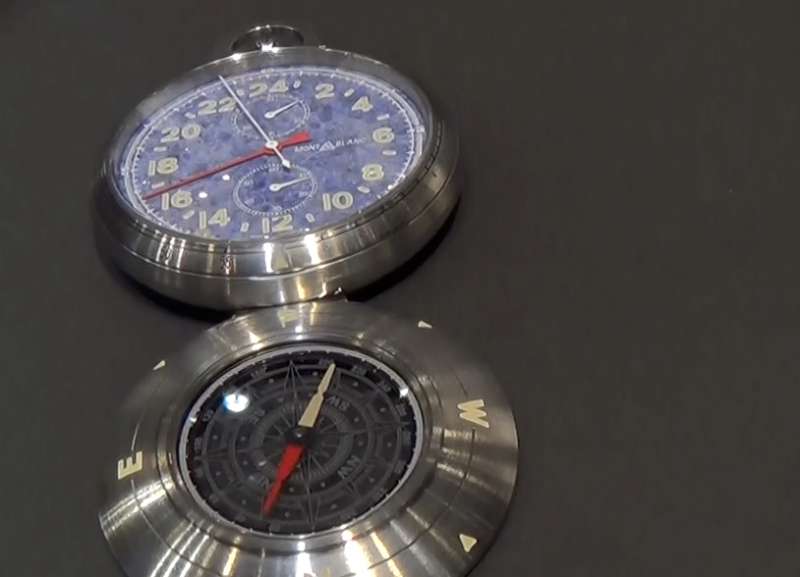 Transformability is becoming one of the biggest trends in watches, and this piece is no exception. Like its predecessor, the Montblanc Rally Timer presented last year, with which it shares a lot of design and engineering characteristics, it can be transformed from pocket watch into a desk clock by folding out the caseback and two legs, and into a wristwatch by folding everything back into place and slipping it into a massive leather case with a double strap. The inspiration behind this year’s 1858 collection is mountain exploration, and this watch expresses it well, with a compass built into the hinged caseback, and the gargantuan strap that enables you to put it on over your coat sleeve.

Unfortunately it’s a theatrical piece more than a practical explorer’s watch. The design team, given all the space in the world on that big watchface, for some reason created interruptions on the fifth-second scale at the edge of the dial, broken by numerals in four positions. And the watch has a standard 3-bar water resistance. It’s not going anywhere. 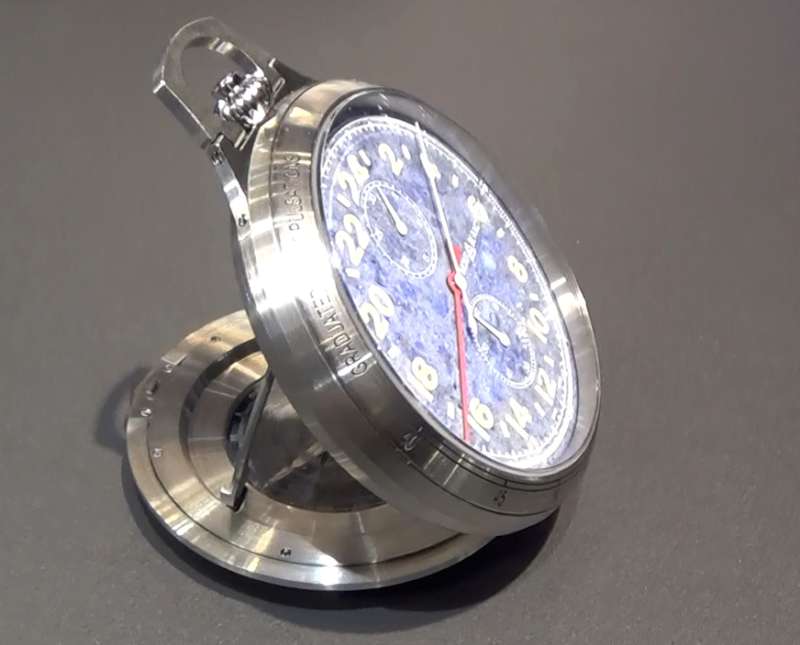 The only other thing I didn’t like about the watch was the colour of the leather used for the strap, a sort of mid-brown. If it had been a raunchier colour, more orangey, or a nice dark brown, I would have been happier. But all in all, the 1858 Pocket Watch is a courageous piece. The dial is different to most. You read the time using the single red hand, which is an hour hand on a 24-hour scale. The two subdials, excavated from the blue mineral rock used for the dial, are for 30 chronograph minutes at the top, and continuous seconds at the bottom. The movement runs at a traditional speed of 18,000 vibrations per hour, 2.5 Hertz, and so you get a great sense of the progression of time racing around the dial from that big chronograph hand. There is a pulsometer scale engraved onto the bezel. The case is in titanium to reduce weight, but it is brought to a nice steely gloss. The Arabic numerals on the dial are coated with SuperLuminova, and likewise the cardinal points on the compass. 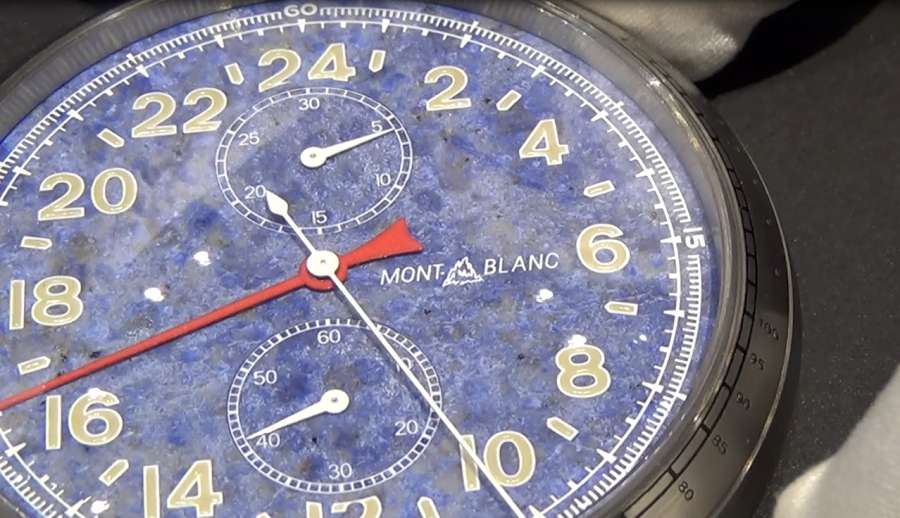 The MB M16.24 movement is spectacular, hand-wound, providing 50 hours power reserve. I’m sure it must be fun to wind and set from the crown. It has all the fascination of calibres made by Minerva, the company founded in Villeret in 1858 that Montblanc acquired in 2007 and whose heritage they are commendably preserving and highlighting. The Y-shaped chronograph bridge and the lever terminating in an arrow are Minerva hallmarks. It is a column-wheel monopusher movement with horizontal clutch, beautifully finished with differentiated brass and steel-colour wheels. Each watch is assembled by a single watchmaker, who does the process twice, first assembling the movement only to check the settings and chronograph functions, and then taking everything apart, having the parts cleaned to perfection, and building it again, this time casing it up and adding dial and hands. The purchaser knows who built the piece that he has bought. 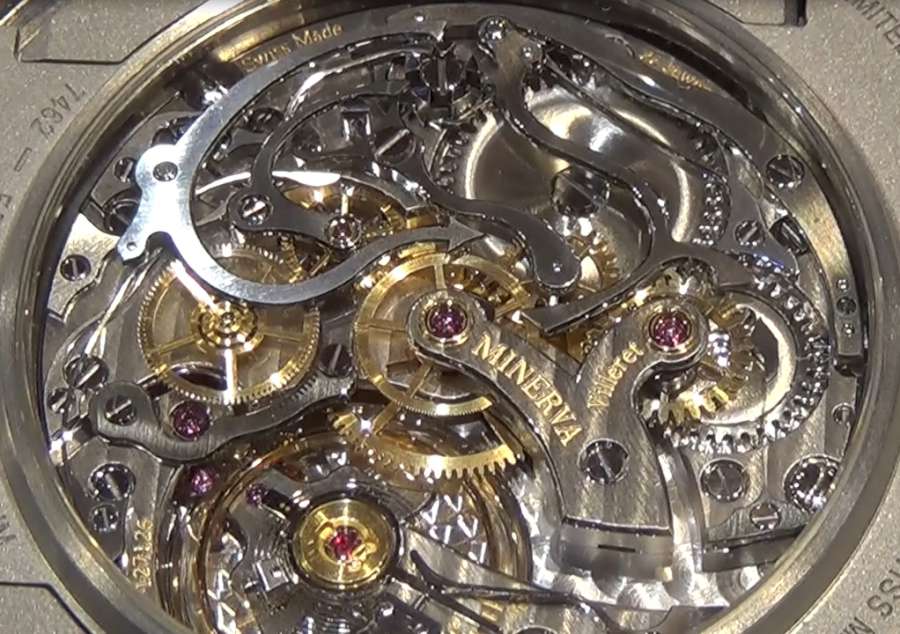 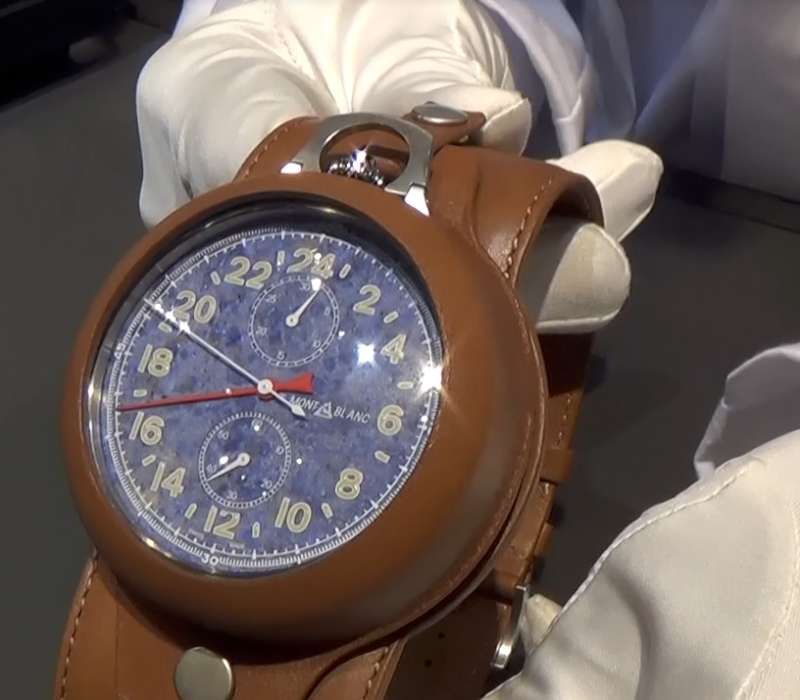