To give it its complete name, L’Astronomo Luminor 1950 Tourbillon Moon Phases Equation of Time GMT by Panerai is a new version of L’Astronomo presented in 2010. That watch combined a tourbillon, calendar, equation of time, and sunrise and sunset times. The new version adds moon phases and a GMT hand. The most innovative feature is the date display, with the numbers laser-etched onto a borosilicate glass disc. They are virtually invisible all the way around, except in the date window, which has a polarized crystal pane above the disc that causes the numbers to appear. Panerai have filed for a patent for this system, designed so that the date disc doesn’t obscure the view of the skeletonized movement, and it is an example of their commitment to research on new materials for their highest-end watches. They have a department titled “Laboratorio di Idee” at their plant in Neuchâtel, Switzerland. In the photo below, you can see ghostly multi-coloured hints of the numbers in the bottom right and top left parts of the disc, while the number appears as if by magic in the date window. 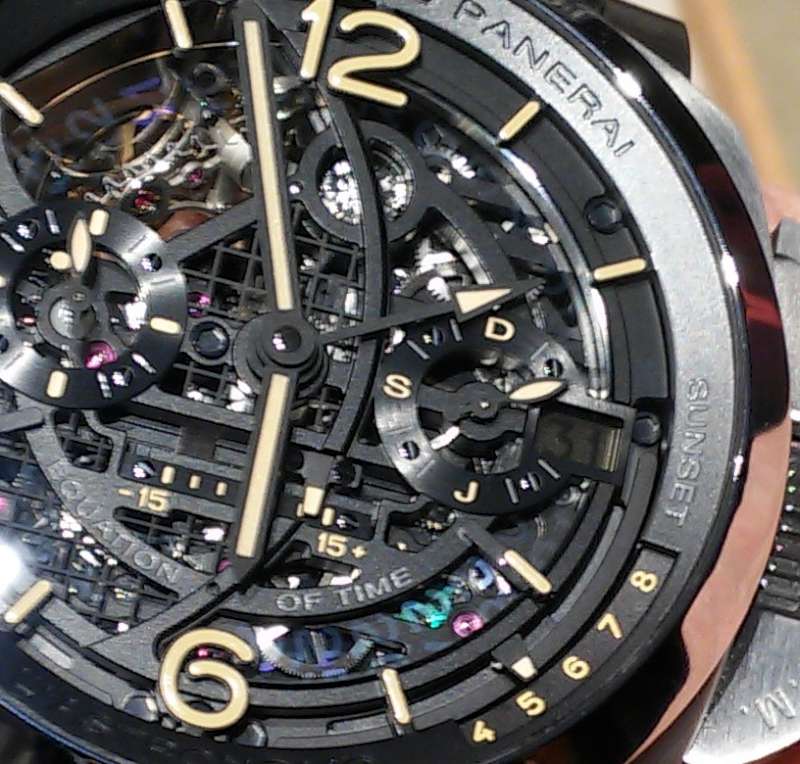 It’s surprising that this is the first watch by Panerai to have a moon phase display. The watch is packed with functions and so the moon phase is shown on the caseback side, in a display that combines a day-night indicator with the moon phase disc. The top disc with sun, stars and moon rotates once every 24 hours and is read using the index triangle on the fixed ring framing the display. The circular window reveals the disc with the moon, rendered in textured white to suggest the moon’s appearance, and it rotates at a different speed, according to the lunar cycle. It is accurate to about one day every 100 years. 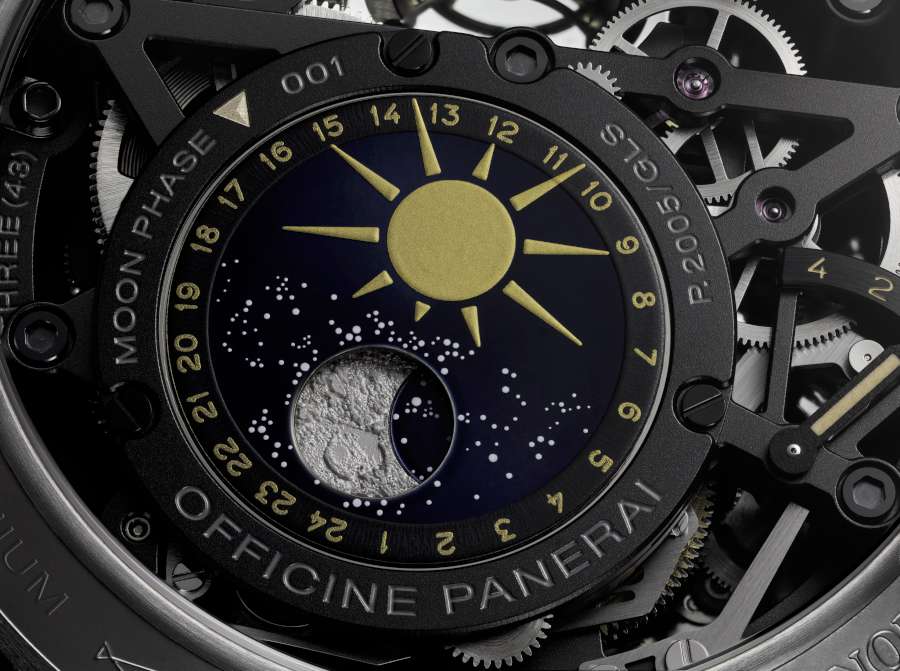 Also on the caseback is the four-day power reserve indicator. You can see part of one barrel above the moon phase display. The watch is hand-wound and it has two mainspring barrels. Also visible on the reverse side is the engraved lettering on the case, in the photo below “Firenze 43°46’ north/11°15’ east,” with the coordinates of Florence, the city where the brand was founded. Each watch is personalized to the owner’s chosen location, so that moon phase, sunrise and sunset indications are tailored to that geographical location. As every timepiece is made to order, the owner can also choose between a brushed titanium, red gold or white gold case, the colour of the SuperLuminova (beige or green), the colour of the hands (black, gold-hue, blue) and the colour of the alligator strap. At this sort of price level – almost €200,000 – it’s natural to try to ensure that the watch will be a one-off piece. 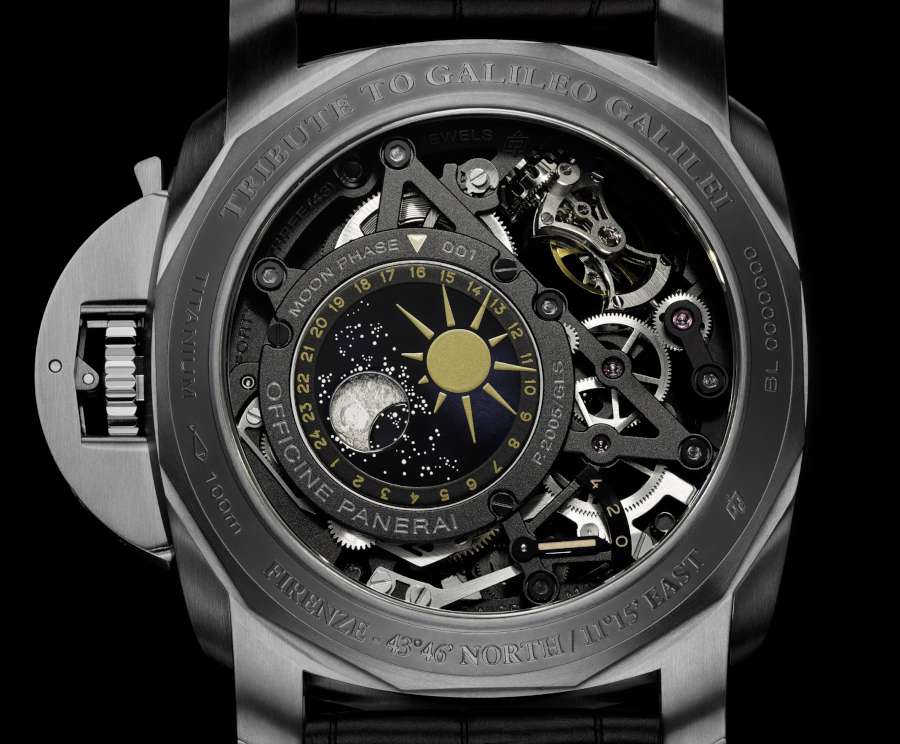 Panerai have developed their own patented tourbillon balance, in which the cage is rotated vertically, within the thickness of the watch so to speak, making one rotation every 30 seconds. Panerai have included a “rotation indicator” on the small-seconds subdial at 9 o’clock, in the form of a dot of lume. Panerai don’t provide information on case thickness but as the movement alone is 11mm thick, the case must be around 15 mm at least. It’s 50 mm in diameter. 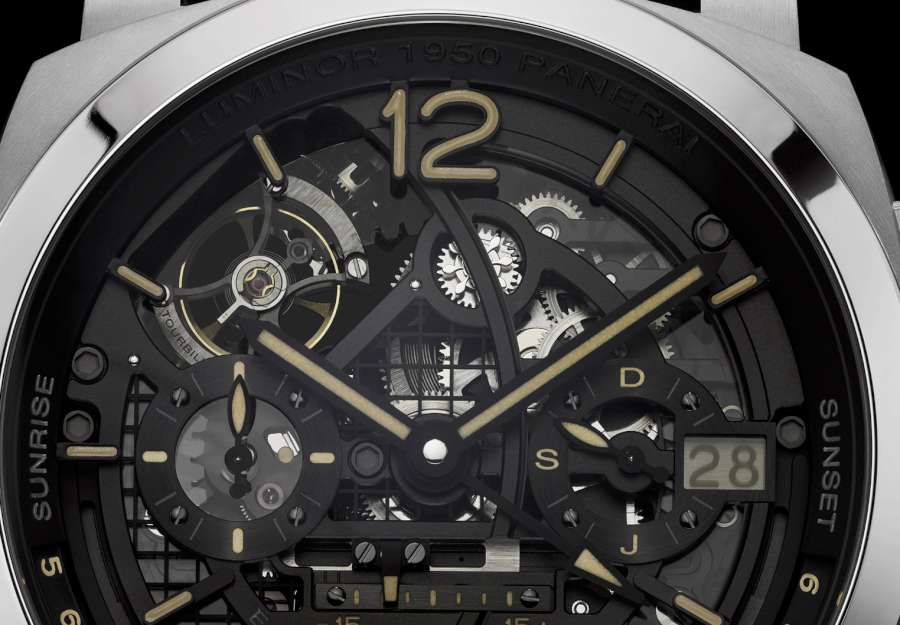 Also visible on the front of the watch is the month subdial at 3 o’clock, right alongside the date window, the equation of time linear display below the centre pivot, and the sunrise and sunset sliders at about 7 o’clock and 4 o’clock respectively. A hand with an arrow tip shows home time, so when you’re at home, the two hour indications will be identical. When you travel to a new time zone, you can adjust the hour and minute hands so that they show local time, while the GMT hand will show home time. The movement is designed so that moon phase, sunrise and sunset indications always refer to the home location and home time as shown by the GMT hand. 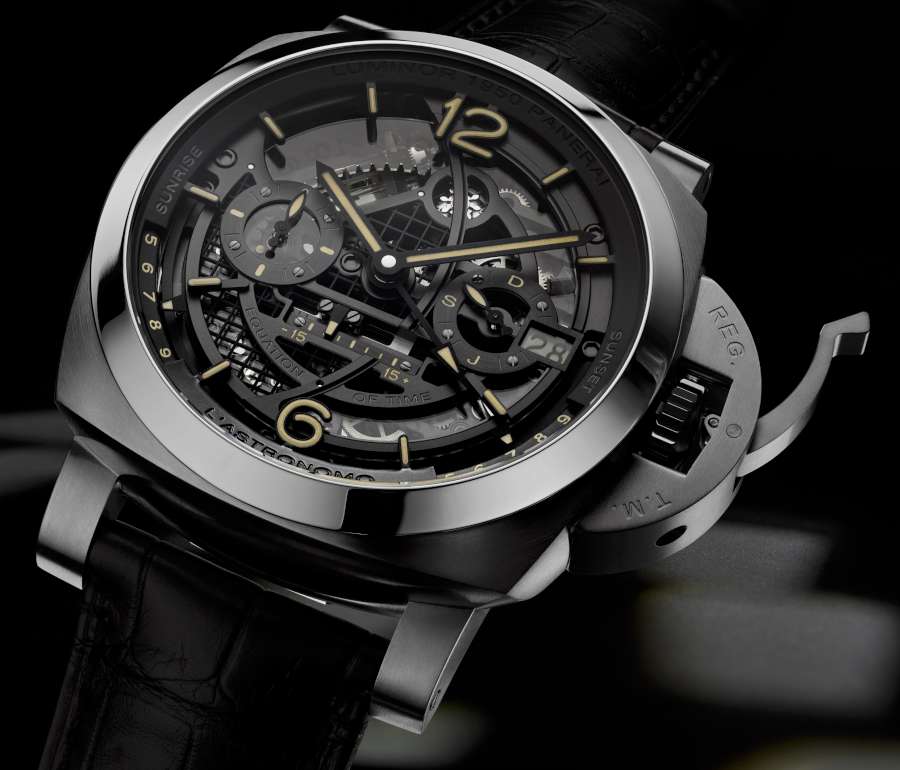 Differently to the 2010 L’Astronomo, the new 2018 version has a skeletonized dial that gives it a very technical look, including the mesh-type construction that you can see in certain sections. The hour numerals are coated with SuperLuminova and are suspended above the rest of the structure. The movement is named P.2005/GLS, in which the acronym stands for “Galileo Luna Scheletrato.” The Luminor 1950 case provides a link to Panerai’s traditions, with crown protector and 100-metre water resistance. 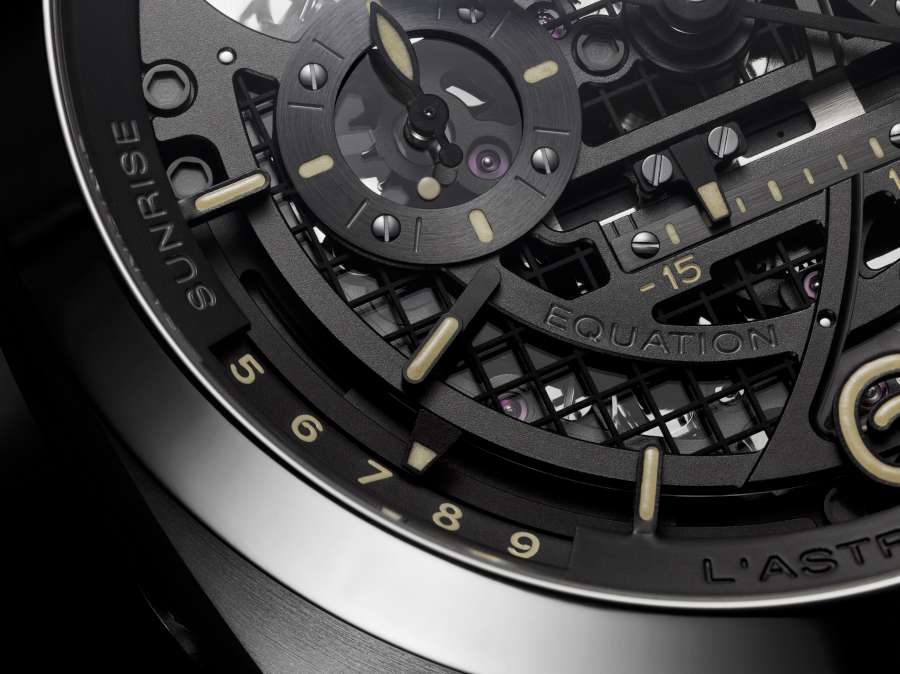 The L’Astronomo Luminor 1950 Tourbillon Moon Phases Equation of Time GMT by Panerai is reference PAM00920, and it costs €199,000. More information on the Panerai website. 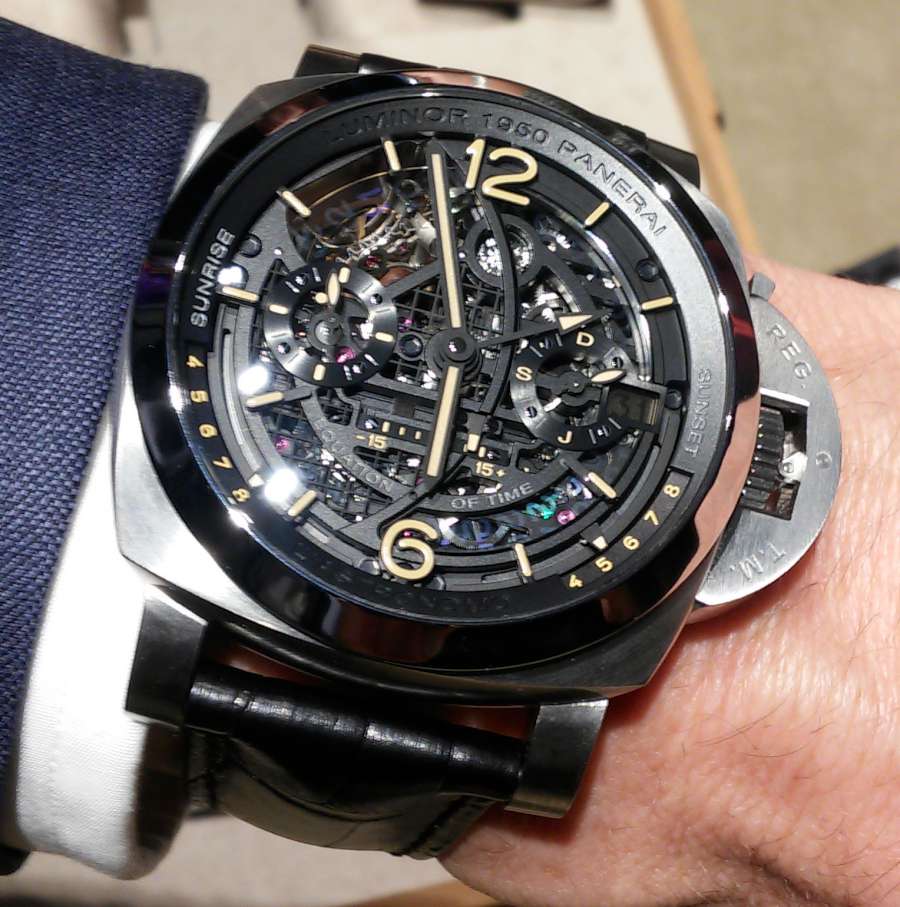