Audemars Piguet have done something absolutely incredible with the Royal Oak Offshore Tourbillon Chronograph. You look at it, and at first sight, you don’t really understand what’s going on. You seem to be looking into a well, a deep opening, with the movement apparently suspended from the openworked wedge-like brackets that dominate the front of the watch, and you think wow, that’s dramatic, but it must be a really thick watch to get that sense of depth. And then you read the specifications, and you see that it’s just 11.6 millimetres thick. It’s an elaborate optical illusion, designed to create a sense of wonder and innovation. 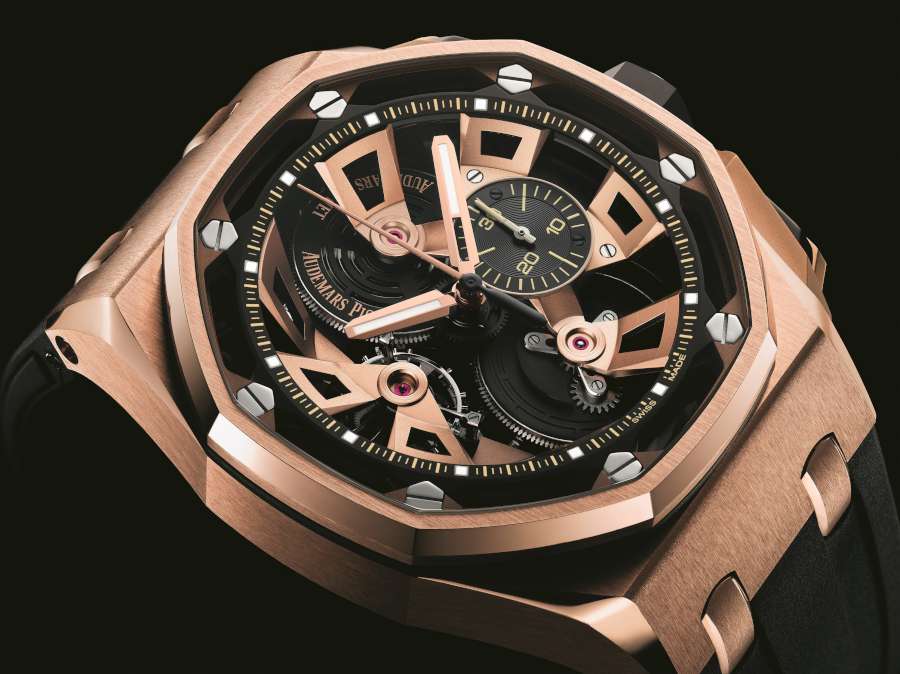 Bezel screws under the watch glass

A whole load of stuff is new and different. The eight screws on the bezel, which are a fundamental part of the original Royal Oak designed by Gérald Genta and also of the Royal Oak Offshore, are still present, but they are actually underneath the sapphire crystal. This provides a bit more space on the top of the watch, and creates a narrow opening between the bezel and the black DVD chapter ring with the minutes scale. 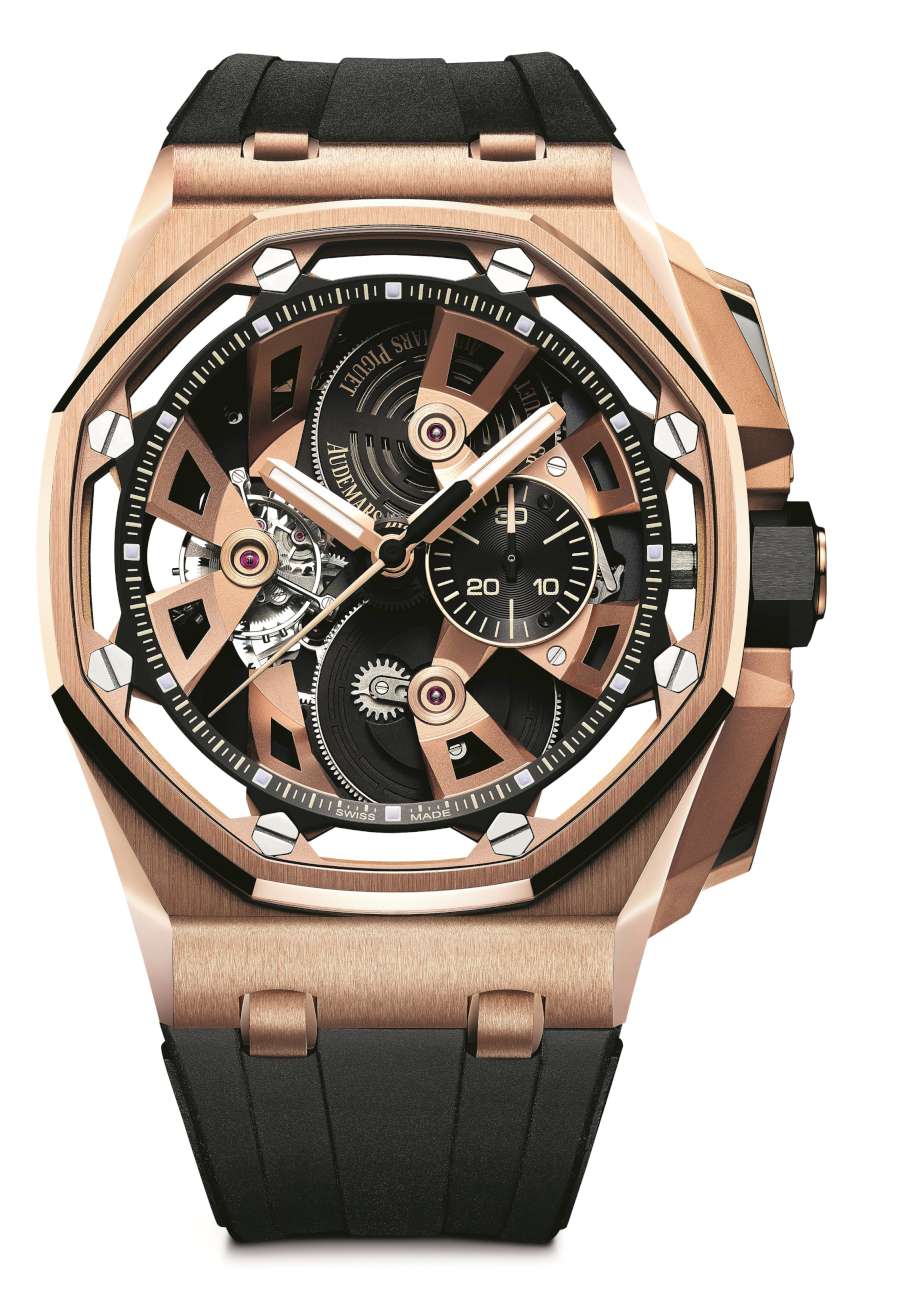 The architecture of the front of the dial is based on the cantilevered brackets that hold the various parts of the movement. They are a bit like the Charles II bridges that Christophe Claret uses in some of his watches, but here they have an angular openwork design and a trapezoidal shape that reinforces the sense of depth. At 9 o’clock, two brackets hold the tourbillon balance. At 1 o’clock and 5 o’clock, there is a bracket for each of the mainspring barrels that provide a power reserve of 173 hours, 7 days. and for a tourbillon watch that’s an achievement in itself. 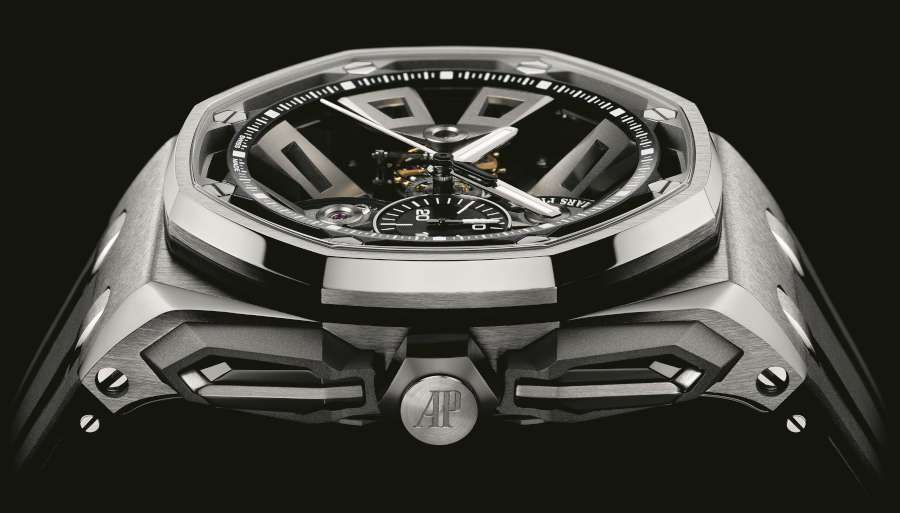 Detailing that adds to the contemporary style

At 3 o’clock, another two brackets hold the 30-minute counter. At the centre of the watch, there are the hour and minute hands, and the chronograph seconds hand. The case is surprisingly small, just 39.78 mm in diameter. Everything is designed for a sense of modernity, such as the black ceramic used for the pushers and crown, the black ring between bezel and case, and the black rubber strap with a pin buckle. The watch is made in two versions, in pink gold or stainless steel. Both are 50-piece limited editions.

The movement of the Royal Oak Offshore Tourbillon Chronograph is the calibre 2947, visible through the sapphire caseback. Various levers operating the chronograph can be seen, along with the column wheel at 6 o’clock, and the wheels of the horizontal clutch at mid-right. There are two trapezoidal bridges, but here they are flat, in total contrast with the depth achieved on the front of the watch.The sapphire caseback is held by a ring with 8 screws that reinforces the watch’s identity as part of the Royal Oak family. 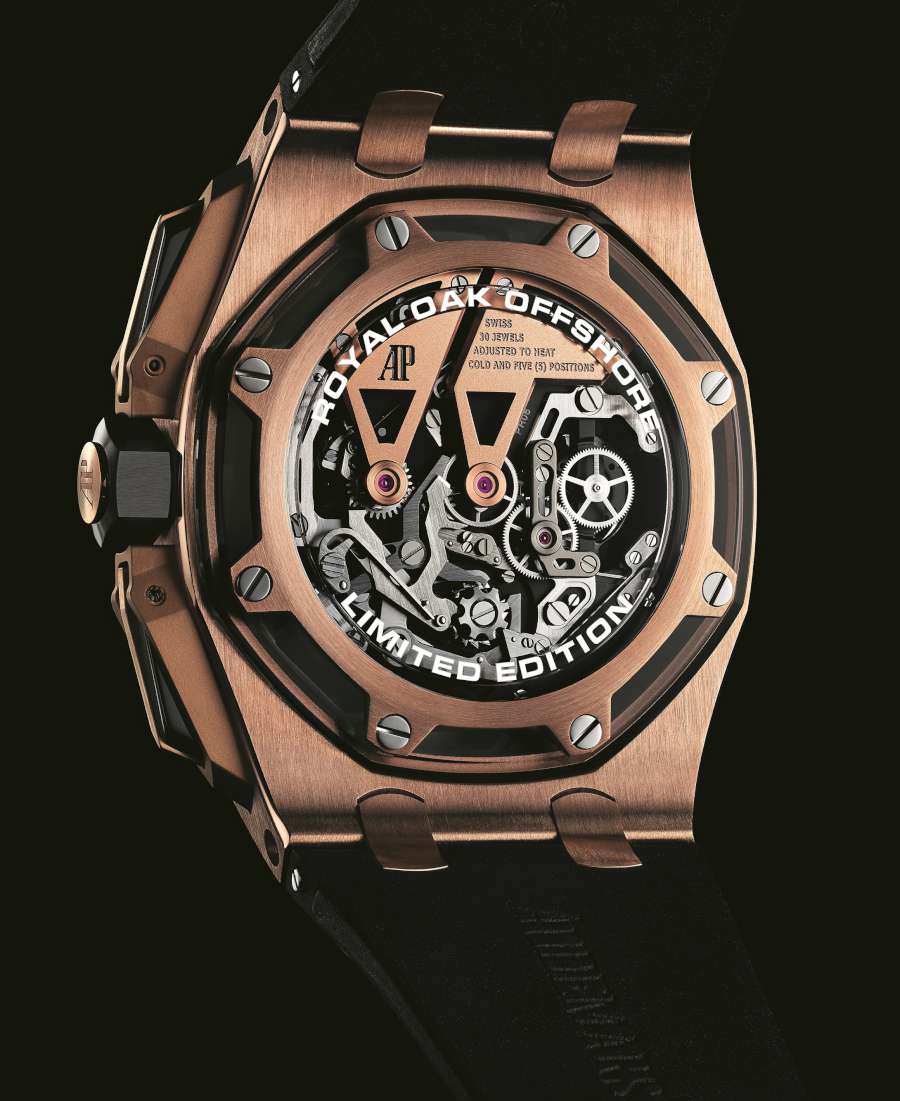 If you compare this watch to the other so-called concept watches by classic brands such as Vacheron Constantin and Patek Philippe, you get an idea of just how daring Audemars Piguet are in their watch design. it’s not just a watch, it’s a piece of architecture, and it really should have a name to it. it would be lovely to know who exactly created this beautiful illusion. but while this watch has a high degree of transparency, the same is not true of the Swiss watchmaking industry. 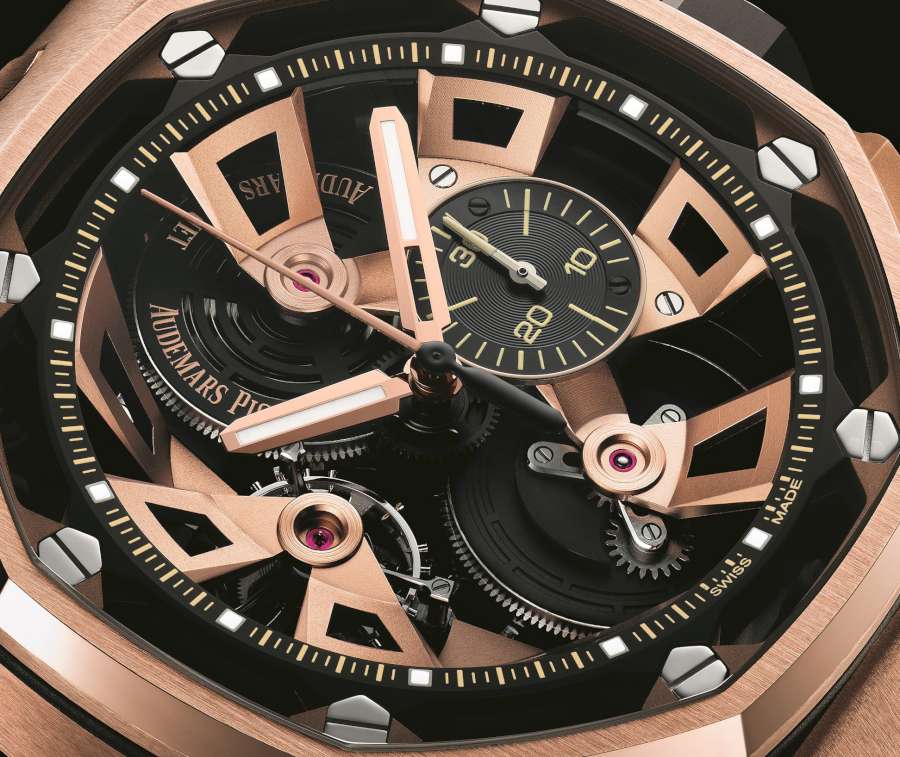 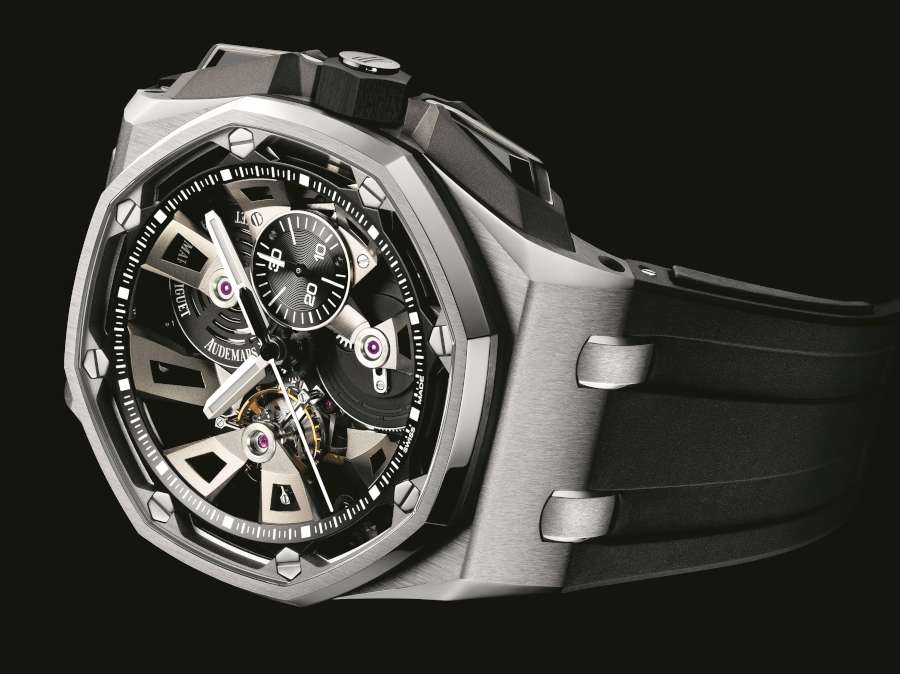