This is definitely the year of world timer watches. Most world timer watches have a fairly standardised appearance, with the city ring at the outside of the dial, and a 24-hour ring just inside. A few brands have taken a different approach, such as Montblanc with its recent 1858 Geosphere. The Globetrotter by Arnold & Son is also unlike most other watches in this area. It has a hemispherical depiction of the globe at the centre of the dial, as if we were looking at our planet from above the North Pole. It therefore provides an intuitive depiction of the way that we can move through time in two ways: either by standing still and letting time pass hour by hour, or by travelling around the world and watching the time change around us as we move through successive time zones. 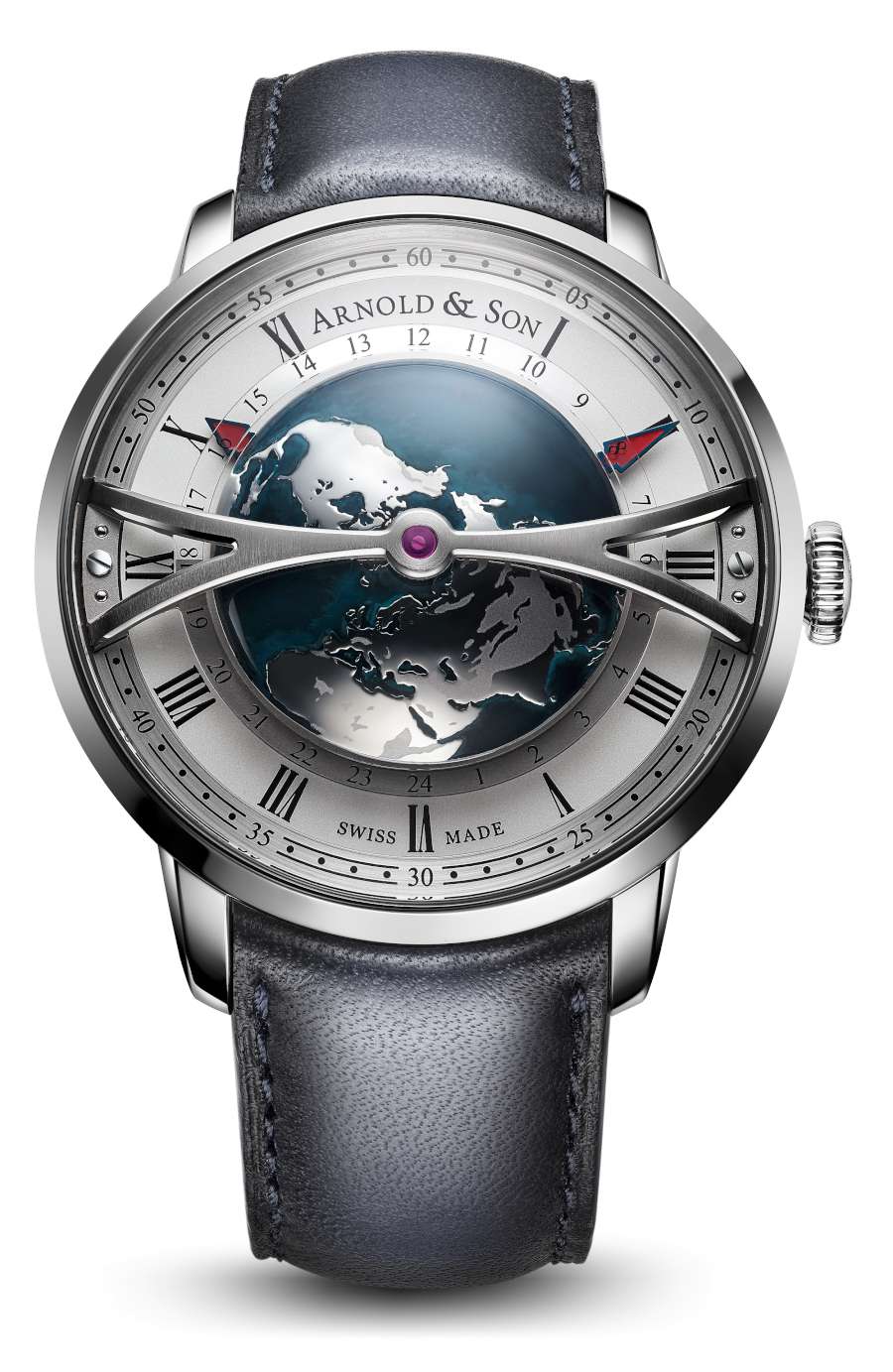 The world hemisphere is suspended from an arching bridge that represents the dominant motif of the dial. You can’t help feeling that the display would have been more effective without this bridge but presumably the designers at Arnold & Son had functional issues to deal with. In analogous watches by Bovet the hemispheres are mounted on a circular track so that no central pivot is necessary. 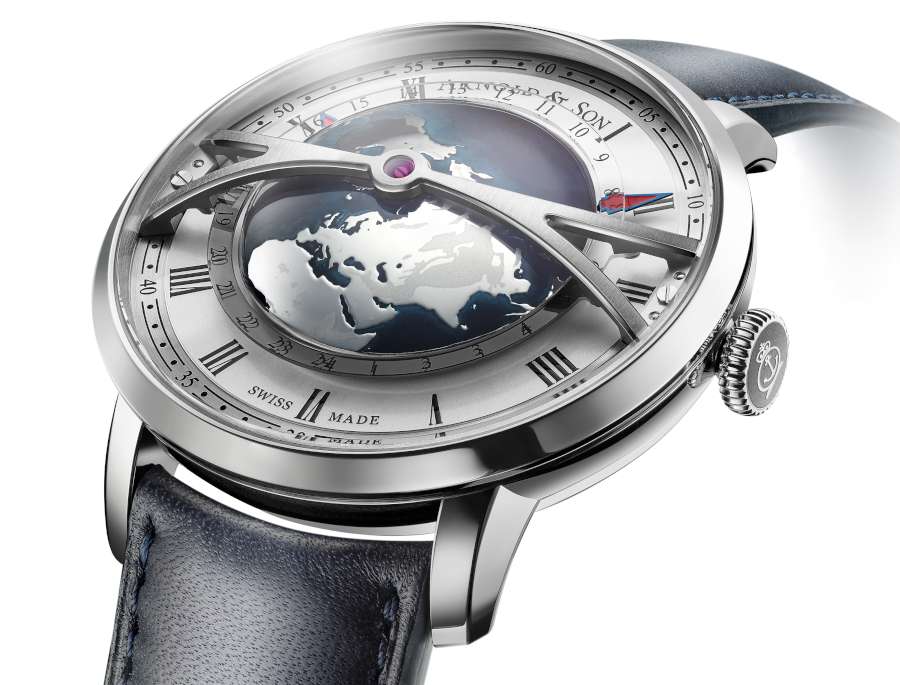 Like our planet, the central hemisphere rotates once every 24 hours. Just outside this, there is a 24 hour disc in sapphire crystal, with differentiated finish to provide a day-night indicator. You can set the 24-hour disc using the crown. Local time is shown by hour and minute hands in blued steel filled with red lacquer. There is no continuous and second display, and no date window. The hours are shown in Roman numerals, which is a reference to the marine chronometers made by the brand’s adopted founding figure John Arnold. You can adjust local time hour by hour from the crown, a useful function for travellers when moving from one timezone to another.

The northern hemisphere is shown in a lot of detail, with suggestions of the different depths of the oceans, and the mountains on the continents. It is made in brass which is etched, plated and coated, and then finished with blue lacquer for the oceans. The resulting watch is sophisticated in its restricted colour scheme based on the cooler hues. The synthetic ruby bearing at the centre of the arching bridge provides a note of warmer colour. 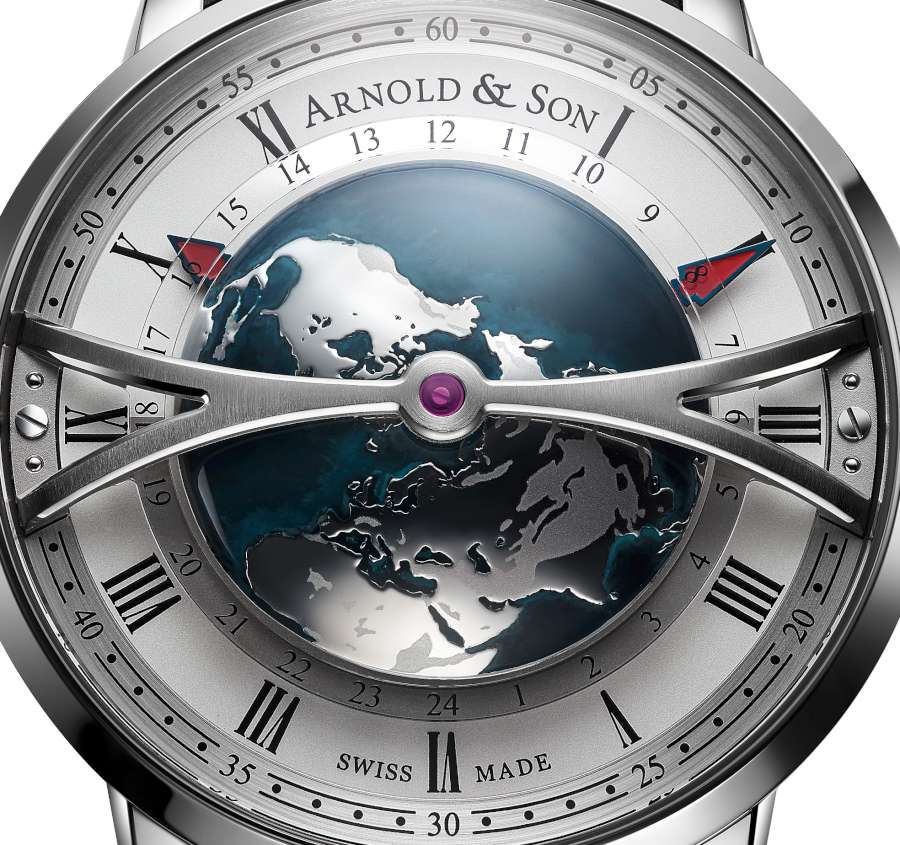 The Arnold & Son Globetrotter is a large watch, 45 mm in diameter and 17.2 mm thick. The case is in stainless steel, with a hand-aged blue calf leather strap. Water resistance is the standard 3 atmospheres, 30 metres, resistant to rain and occasional splashes only.

The movement is calibre A&S6022, made in-house, with 29 jewels. The balance runs at 28,800 vibrations per hour, 4 Hz. It is wound automatically by an oscillating weight, and when fully wound it has a power reserve of 45 hours. The movement can be seen through the sapphire caseback, and it has an NAC treatment that produces a cool grey appearance, enhanced by the fine finish which includes circular graining, radial Côtes de Genève, and hand-mirror-polished screw heads. 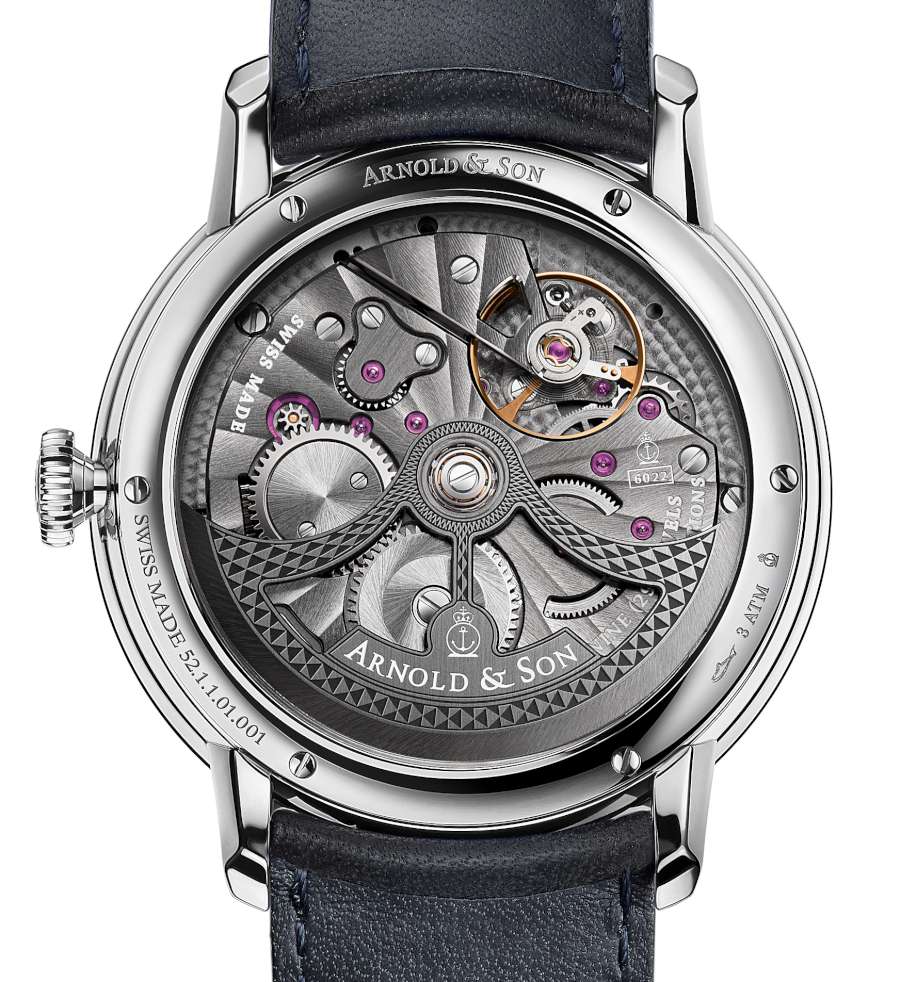 The Arnold & Son Globetrotter world timer watch is reference 1WTAS.S01A.D137S. It costs 14,900 Swiss francs excluding VAT, or $16,995. It’s expensive, but less so than most of the luxury watches by this brand. More information from the Arnold & Son website.