The U50 Diver Tourbillon by Angelus is a large and colourful watch that combines the fascination of a skeletonized dial and movement with the theatricality of a tourbillon and the practicality of a diver’s watch. Generally a diving watch is a tool watch and so very often doesn’t have a display caseback. The Angelus U50 on the other hand has a titanium case with a water resistance of 300 metres, two screw-down crowns, one for winding the movement and setting the time, and one for adjusting the internal rotating bezel, and a sapphire caseback. The movement is spectacular, specially developed on an architecture based on a series of beams, analogous to the system used by Roger Dubuis. 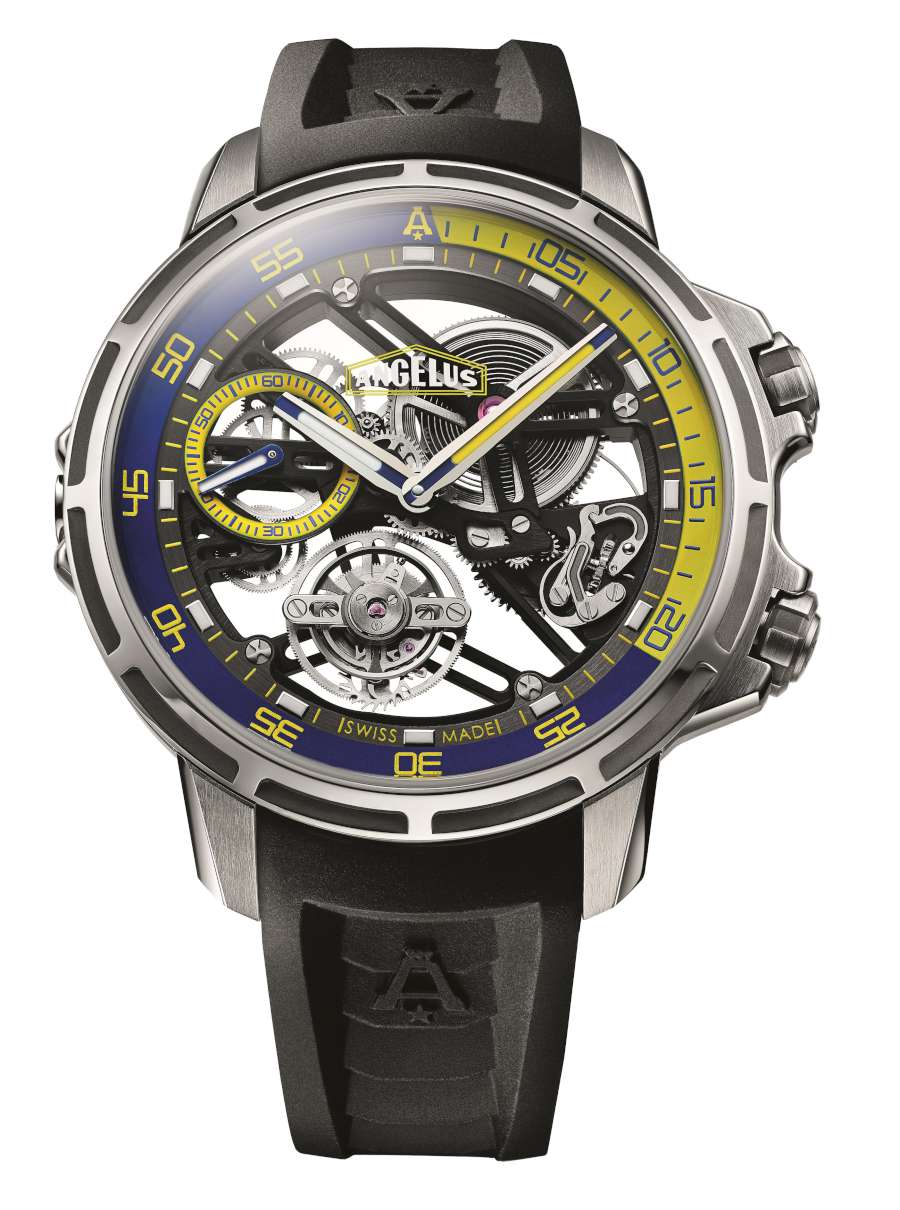 The U50 Diver Tourbillon is immediately distinctive for its blue and yellow colour scheme, framed by a narrow bezel. The hands are also blue, with white SuperLuminova on the seconds and hour hands, yellow on the minute hand. The case is large, 45 mm in diameter and 12.47 mm thick, with an interesting design. The bezel is brought to life by a series of rectangular slots that are perhaps a reference to the rotating bezel of most dive watches, though in this watch, this component has been replaced by an internal rotating bezel controlled by the second crown. Another prominent feature of the case is the helium escape valve at 9 o’clock, a feature of professional diver’s watches. The strap is in black rubber with printed decoration based on the Angelus logo both inside and out, and it has a titanium pin-buckle. 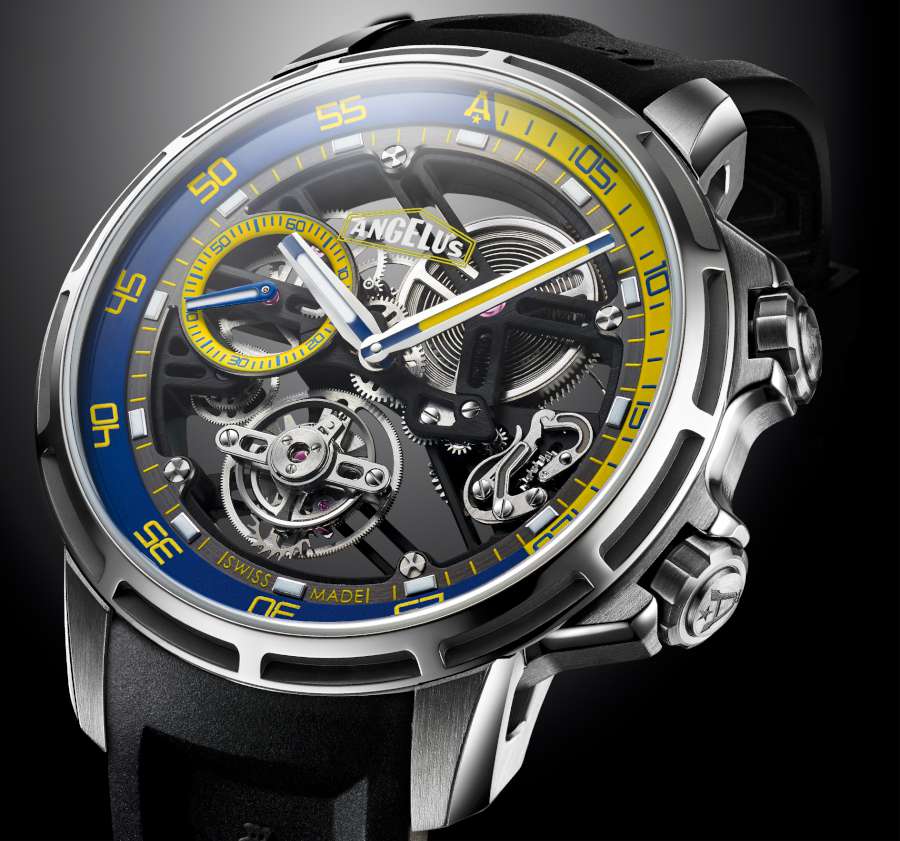 The watch is powered by the hand-wound A-300 calibre, designed and built in-house. It is structured on a series of dual beam-type bridges that create a distinctive architecture, not quite as iconic as Roger Dubuis’ watches but striking all the same. The wheels also have a bespoke design, with six spokes, and they are held between the two layers of beams. The focus is on the one-minute tourbillon at 6 o’clock, but everything is in clear view, from the mainspring to the winding gear train. Finish is based on black ADLC coatings. The tourbillon balance runs at 4 Hertz, 28,800 vibrations per hour, and the mainspring provides a power reserve of about 55 hours. 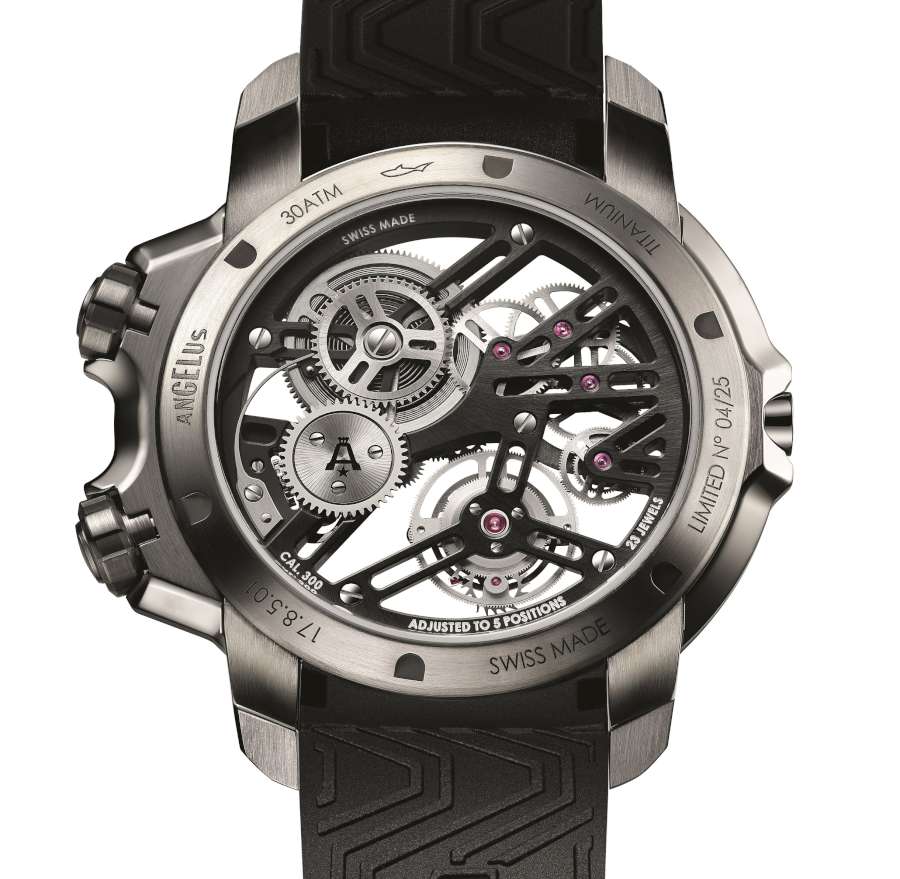 The Angelus U50 Diver Tourbillon is reference 0TDAT.B01A.K008T, and it costs €26,518, 29,700 Swiss francs plus tax, $32,995. It is an expensive watch but considering the tourbillon movement, you could say that it is aggressively priced. Undoubtedly an interesting and unusual product. More information from the Angelus website.