A touch of genius from Hermès. Many of the 35 brands presented new moon phase displays in this 50th anniversary year of the first moon landing, and one of the most original watches of this type was Arceau l’Heure de la Lune by Hermès. In this piece, probably based on an original concept by La Montre Hermès Creative Director Philippe Delhotal, two mother-of-pearl moons remain fixed on the dial, while the two subdials, one for time, the other for date, rotate slowly, completing a circuit in 59 days and thus displaying two moon phases, one for each of the earth’s hemispheres. The mechanical movement powering this watch is complex and sophisticated, and it is designed in such a way as to maintain the two subdials horizontal throughout their rotation around the dial. 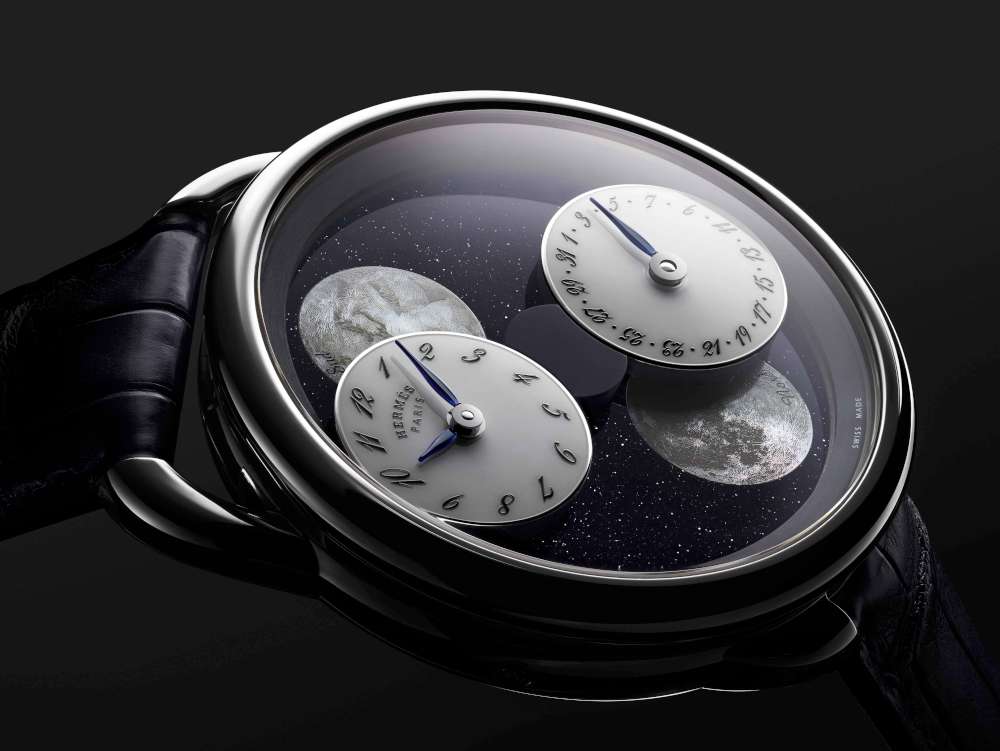 Detailing is splendid, with a dial in meteorite or aventurine, and the top lunar disc incorporating a depiction of Pegasus perfectly integrated into the natural mother-of-pearl texture. This particular feature was created by “dreamer-designer” Dimitri Rybaltchenko, and according to the people at Hermès, it “hints at a passage between two worlds, where magic and reality merge.” This is typical of the company’s approach to time, searching for more poetic expressions, as previously seen in watches like L’heure impatiente, Le temps suspendu and L’heure masqué.

Specially-designed module for the display

All the mechanics is behind the dial, visible through the sapphire caseback. In addition to the Hermès H1837 base movement with 193 components developed by Vaucher – 25%-owned by Hermès – there is an additional module developed by Jean-François Mojon of Chronode, transferring the 59-day cycle to the two subdials along with the separate time and date functions. This module has 117 parts, and it is 4.2 mm thick. The overall design of the watch’s movement took two years to complete.

The watch is available in two 100-piece limited editions, with meteorite or aventurine dials. The white gold Arceau case is a classic model, designed by Henri d’Origny in 1978, 43 mm in diameter. Both versions cost 26,000 Swiss francs, and they are available from spring 2019. Read more on the Hermès website. 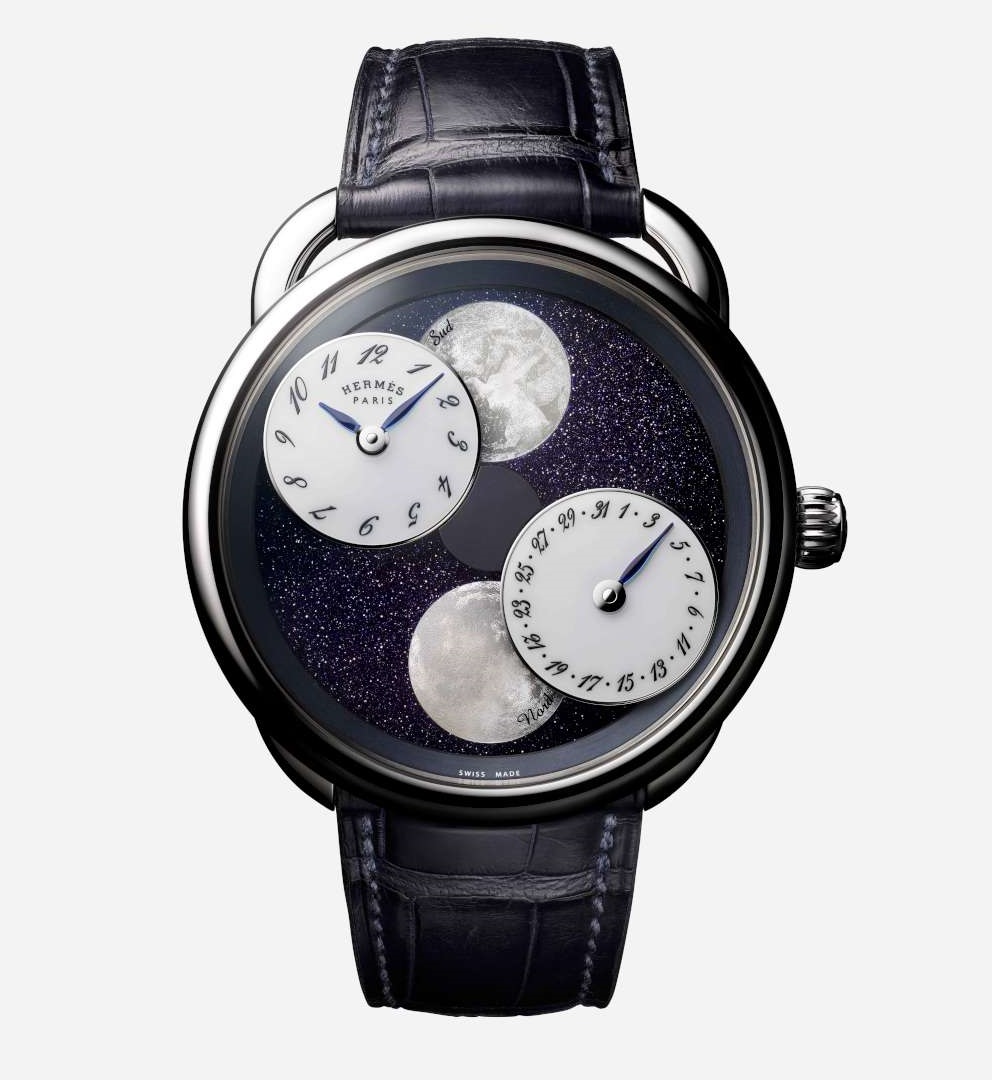 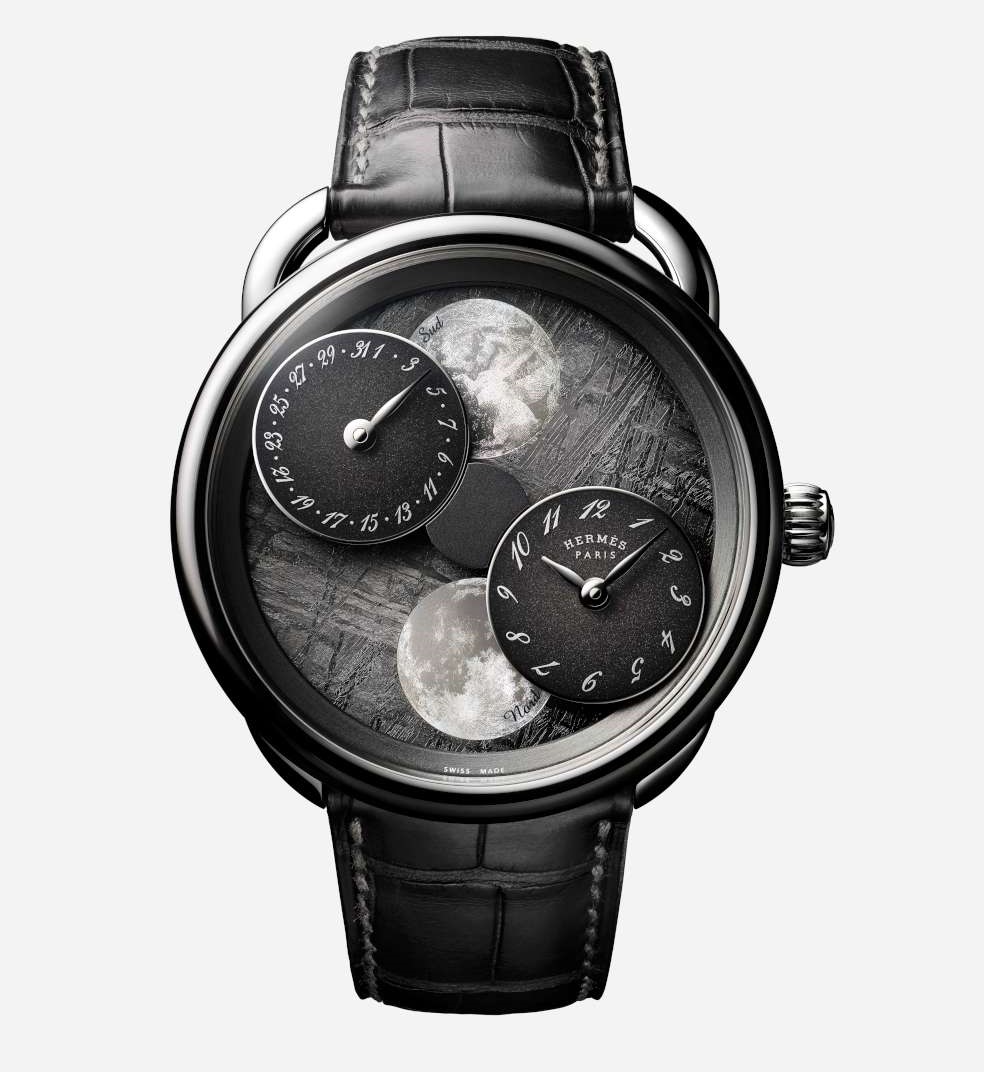