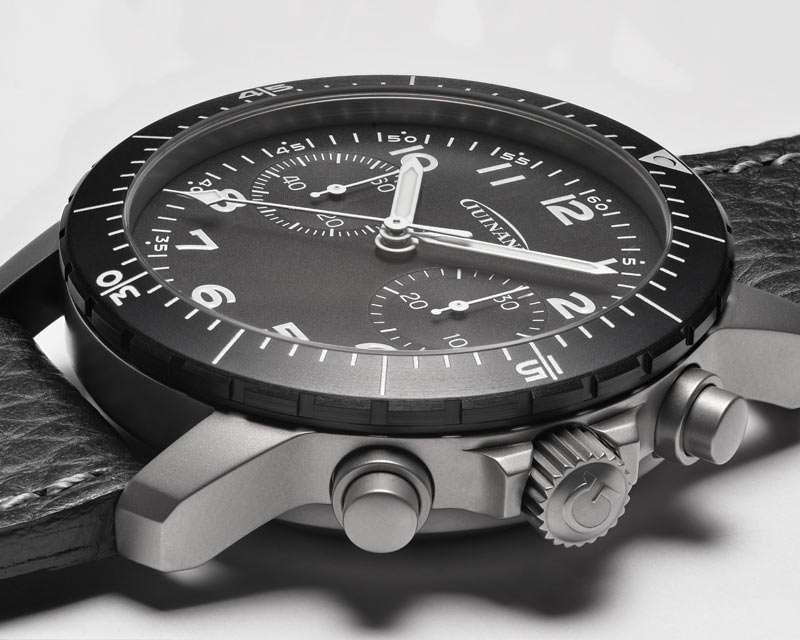 Unmistakably tough. Unmistakably pilot’s. The Starfighter Pilot Chronograph watch by Guinand has a lot of attractive features and a ton of aviation DNA, with links to Helmut Sinn and the long tradition of German watchmaking. Its name Starfighter is a connection to the watches by Heuer and other brands that were supplied to German and other NATO pilots of those eponymous planes during the Cold War years. All photos here are courtesy of Guinand.

Missile with a man in it

The F-104 Starfighter was a legendary aircraft, as exciting as it was dangerous. The Federal German Republic’s air force lost 262 out of its total of 916 Starfighters through accidents, and 116 pilots, a dramatic toll that led to the plane’s nickname Witwenmacher. But it was a remarkable aircraft, the first fighter capable of sustained Mach 2 flight, and a power-drag ratio giving it impressive climb performance. Its small wings limited its turning capacity and gave it a landing speed of over 300 km/h, along with another descriptive nickname, “Missile with a man in it.” 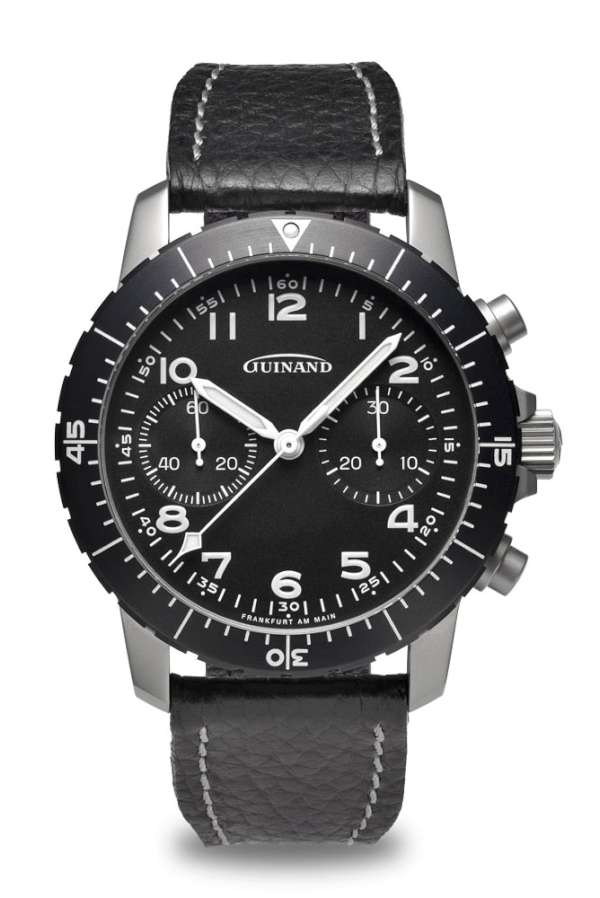 The reformed German air force Bundesluftwaffe developed a commission for a chronograph watch for its pilots, and the first watch supplied was the Hanhart 417, from 1955. This was followed from 1957 by the Junghans J88/0110 chronographs with the famous J88 column-wheel chronograph movement This was replaced by the Heuer Bundeswehr chronographs from 1967. So the Bundeswehr can be considered as another iconic pilot’s watch pattern, analogous to the B-Uhr Type A and Type B watches, and the Mark XI watches made by Jaeger-LeCoultre and IWC. Presumably the pattern reflects an overall NATO usage, because a commission from the French air force led to the Breguet Type XX in the 1950s. Breitling supplied a similar-looking watch to Italian pilots and paratroopers, the 817, in 1974-75. Needless to say, many of these models – particularly the Breitling 817 – have become rare and coveted collector’s items. 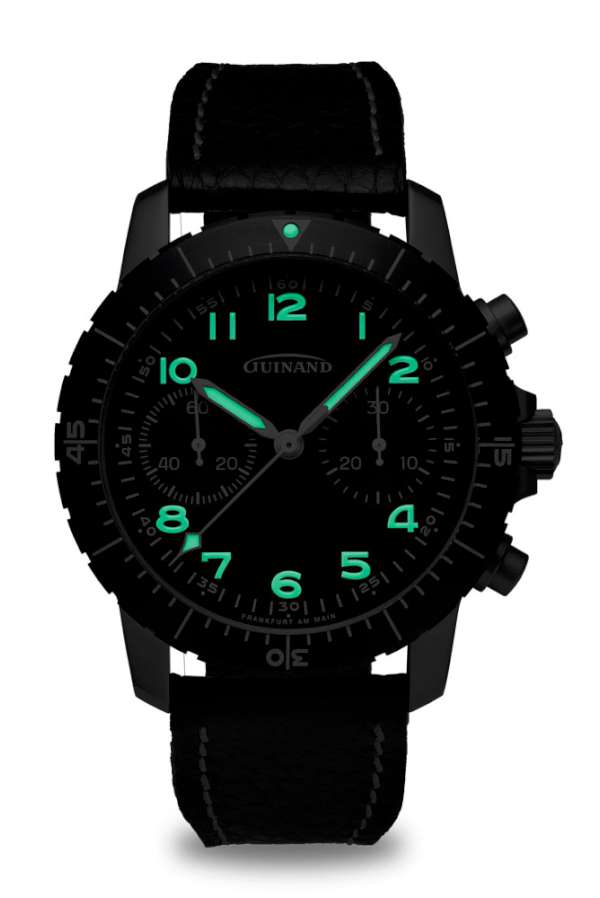 The Heuer SG 1550 or Heuer Bundeswehr was a 42mm flyback chronograph powered by the manually-wound Valjoux 230 movement, with a bi-directional rotating bezel and a slightly recessed 30-minute chronograph minute counter in the 3 o’clock position. It was made during the 1960s and ‘70s in many variants, all very similar, with Valjoux 22, 220 or 230 calibres. It began life as a pilot’s chronograph made by Leonidas in the early 1960s. Heuer purchased Leonidas in 1964 and so also acquired the rights to that chronograph model. In the 1980s and ‘90s, Sinn had a contract for the maintenance of military-issue watches, and sometimes they replaced worn dials with versions branded Sinn. 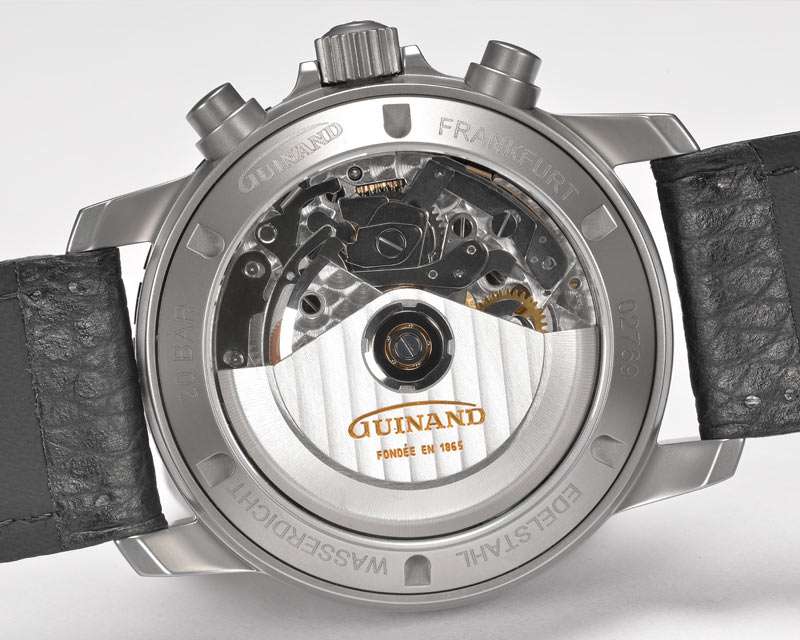 In the 1990s, Sinn were selling renovated versions of military surplus Heuer Bundeswehr chronographs, and more recently, this company created a new reinterpretation of the Bundeswehr, the Sinn 156 Mil with a Lemania 5100 automatic movement. Bell & Ross followed suit with the M1. Both these watches are rather different, with three subdials, and day-date indicator at 3 o’clock. 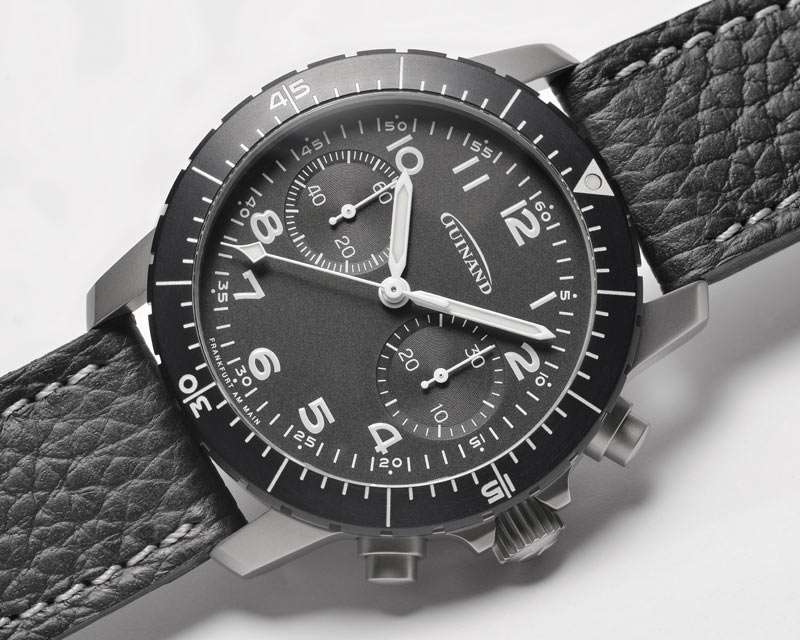 The Guinand Starfighter Pilot Chronograph is close in looks to the Bundeswehr, without being a direct copy. The dial is very similar, right down to the design of the numerals with their bright SuperLuminova paint. The case is fairly large at 42.6 mm and 15.6 mm thick, in bead-blasted or satin-finish stainless steel, with a pressure resistance of 20 bar, corresponding to 200 metres water resistance. The bidirectional rotating bezel adds extra functionality, for timing countdowns, or keeping track of long elapsed times by using the hour hand and the reference triangle. The display caseback reveals the Valjoux 7753 movement by ETA, a development of the 7750, self-winding, with the stop seconds function, power reserve about 40 hours .The watch has a black calfskin strap with textured surface and contrasting stitching. Other strap options are available on the Guinand website.

The Guinand Starfighter Pilot Chronograph costs €1,879 including VAT, available from the Guinand website, free shipping within Germany, VAT not charged when delivered to countries outside the EU.

A brief history of Guinand

Guinand is a company with a long history, founded in 1865 by Julien-Alcide and Charles Leon Guinand as Guinand Frères in Les Brenets, Switzerland. In 1881 they introduced their first chronograph pocket watch, and started making wristwatch chronographs from 1910. In later decades they supplied military forces with various types of watch, and continued to make chronographs for other Swiss and German brands. Guinand’s customers included the brand Sinn that had been founded in Frankfurt by Helmut Sinn in 1961. In 1994, Helmut Sinn, at the age of 78, decided to retire and sold his brand to Lothar Schmidt. But he still had a lot of energy and so he purchased a majority share of Guinand and founded the company Jubilar Uhren in Frankfurt, launching two brands, Jubilar for pocket watches, and Chronosport for pilot’s watches and chronographs. By 2000, Guinand – still located in Switzerland – had become Guinand Uhren Helmut Sinn, and its products included Guinand-branded watches. In 2006, the 90-year-old Helmut Sinn retired again, handing over control to his associate Horst Hassler who continued operations up until his own retirement in 2014.

Ernst-August Matthias Klüh, born in Frankfurt, had been a collector of Sinn watches in the 1980s, worked briefly for that company, but pursued a different career as an electrical engineer up until 2014, when he heard about the closure of Guinand. He purchased the brand name and what was left of its property, but basically had to start from scratch, finding a new location in Frankfurt, purchasing new machines and taking on new employees. He was able to acquire many spare parts, customer records, and some watches. During renovation of the building that became the new factory, Helmut Sinn paid him a visit – still driving at age 99 – as a tacit expression of his approval.