The 5520P-001 Alarm Travel Time by Patek Philippe is unusual in its looks. It combines the classic pilot’s watch layout, with chunky numerals and hands providing good visibility by means of facets of luminescent paint, with the grand complications of a second time zone and a chiming alarm. The four large crowns – or rather, three pushers and one crown – give the timepiece a unique appearance, that could be described as “more is more” as opposed to the more usual “less is more” typical of contemporary design. The watch is 42.2 mm in diameter, 11.6 mm thick, and has an interchangeable solid or display caseback. This operation cannot be performed by the end-user, but only by authorized Patek Philippe watchmakers. 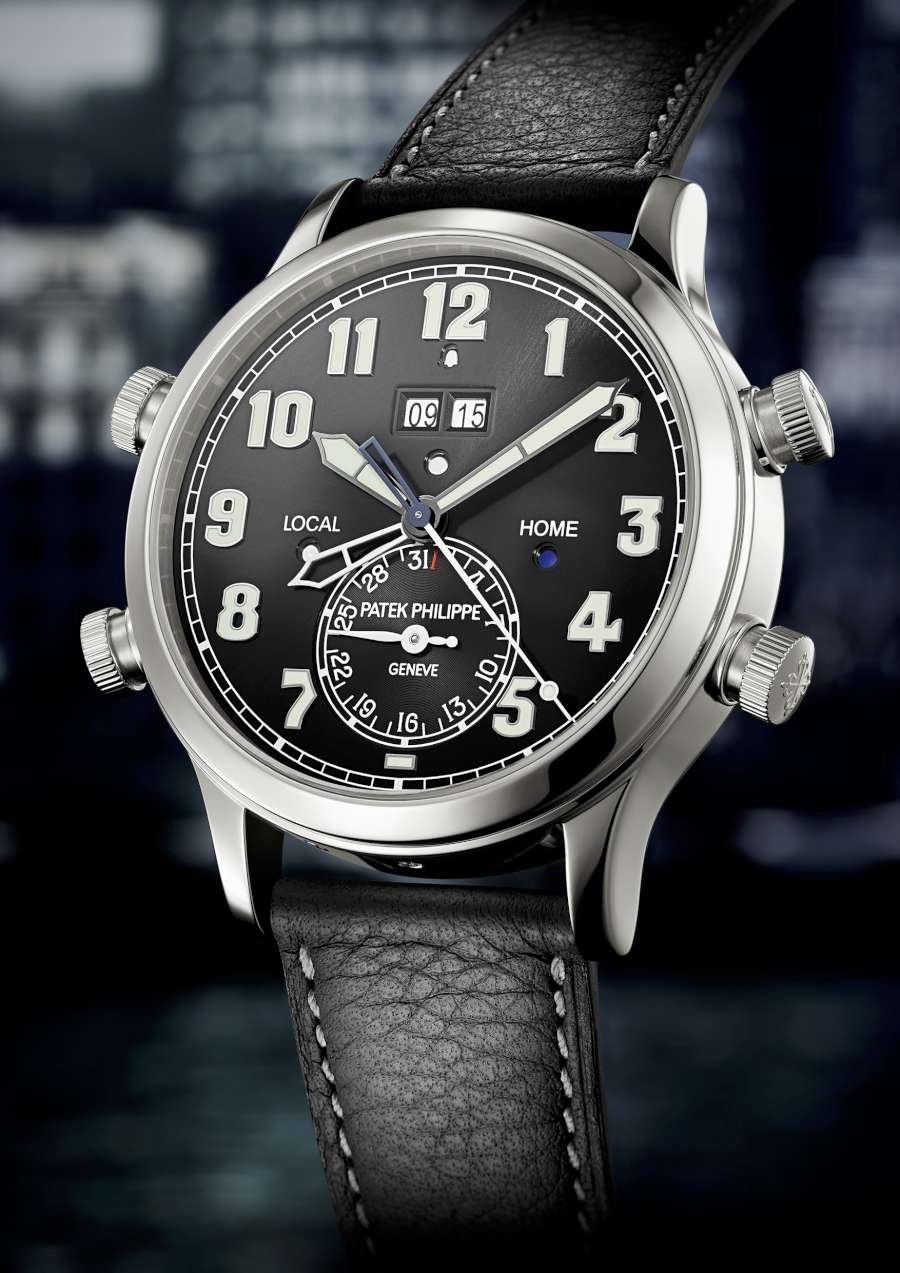 The dial is clearly laid out, and operation is made easy for the user. The luminescent hands show local time, and the skeletonized hour hand shows home time. The two pushers on the left, unlocked by a quarter-rotation, are used to advance the local time hour hand forward or backwards in one-hour intervals – the pushers have + or – signs in relief. The date, coordinated with the local time hands, is shown on the analogue subdial at six o’clock, and it is adjusted using a recessed pusher between the lugs. The alarm time, coordinated with local time, is shown in the two square windows near the top of the dial, and it can be adjusted to 15-minute intervals, forwards or backwards, by rotating the crown at 4 o’clock in the second of its three positions. This crown, in its first position, is also used to wind the watch if necessary (anticlockwise) and the alarm chiming mechanism (clockwise). Time is adjusted by the same crown in the third position. 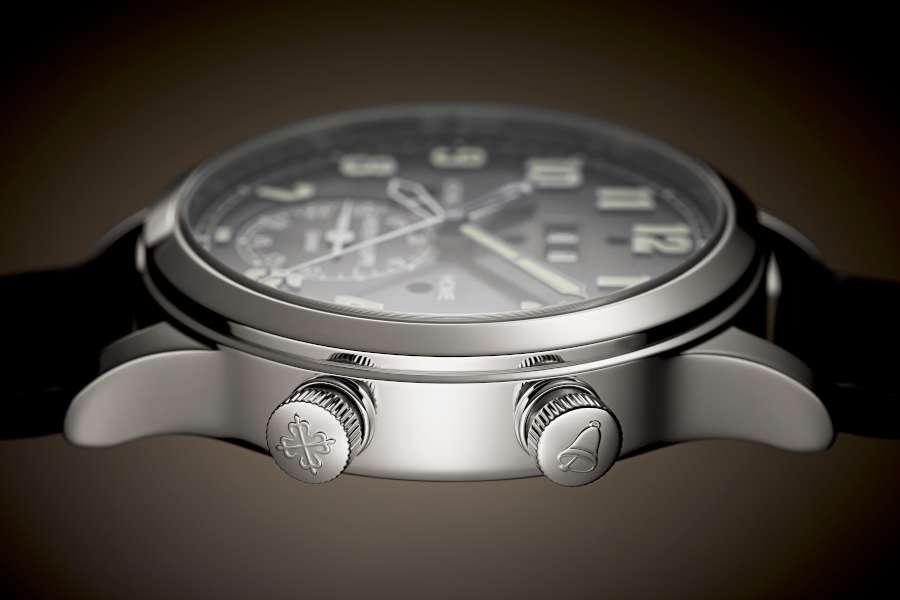 The movement includes four patent-pending inventions involving the alarm setting mechanism. The bell-shaped window above the alarm time windows show whether the alarm is activated or not, and the three small circular windows are day/night indicators for local time, home time and alarm time. 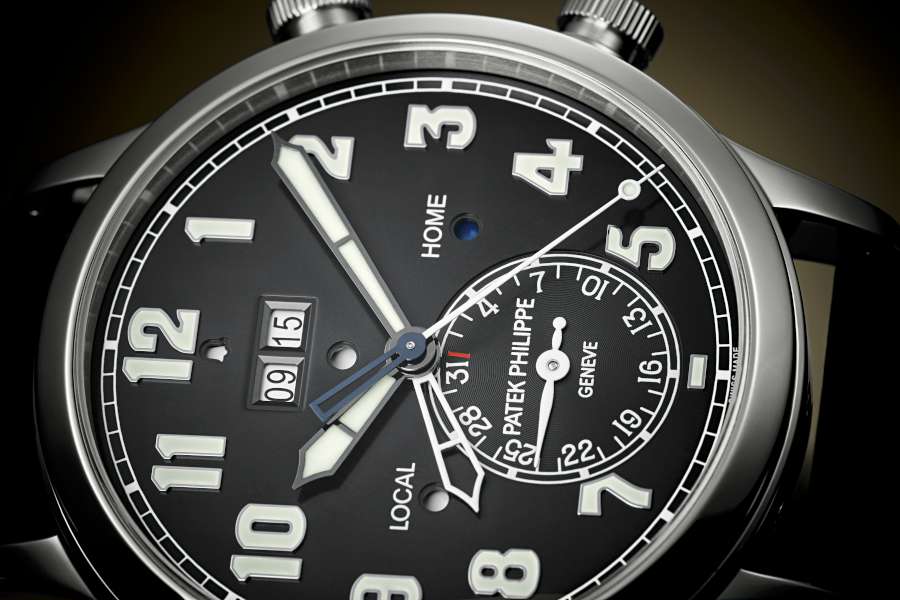 The feature that projects this watch into grand complication class is the type of alarm, which uses the same sort of hammer and gong arrangement as used for minute repeaters. The gong is attached to the caseband and the Patek Philippe design team have worked hard to ensure a reasonable level of audibility notwithstanding the platinum used for the case – a metal whose weight generally makes it less capable of transmitting sound. The hammer operates at 2.5 Hertz and continues striking for about 35 seconds, though it can be stopped by pressing the pusher at 2 o’clock. For the first time for Patek Philippe repeater watches, this piece has a 30-metre water resistance. All other Patek repeaters are rated as not water resistant because of the apertures necessary to allow sound to emerge. 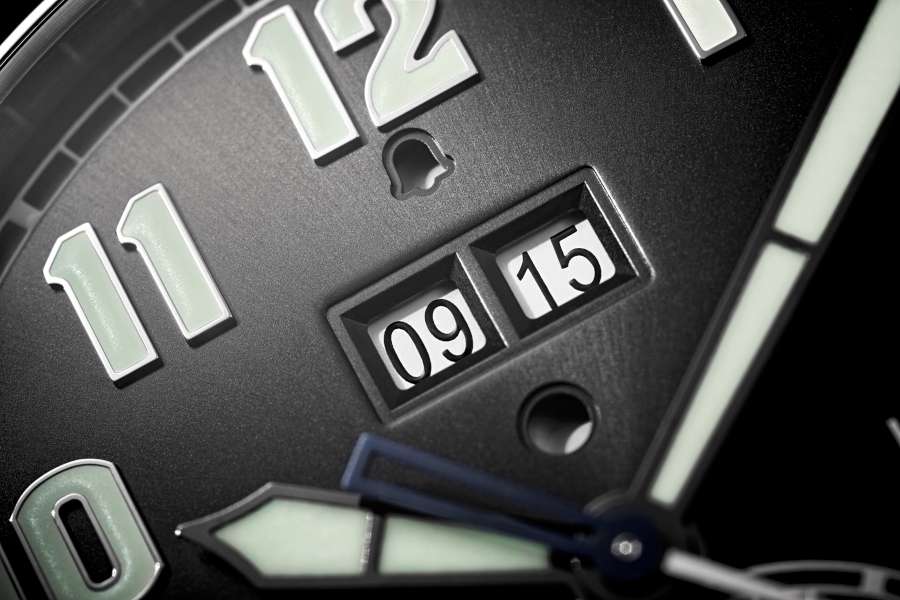 The movement, Calibre AL 30-660 S C FUS, comprises 574 parts, making the 5520P-001 one of the brand’s most complicated watches. It runs at 4 Hertz, it is self-winding, and provides a power reserve of 52 hours. It is certified by the Patek Philippe Seal, which was adopted by the brand in 2009, replacing its affiliation with the Geneva Seal Bureau. The Patek Philippe Seal requires an accuracy of within -3/+2 seconds per day, so more stringent than both COSC and the Geneva Seal. It takes the form of a double P motif engraved onto a movement plate. 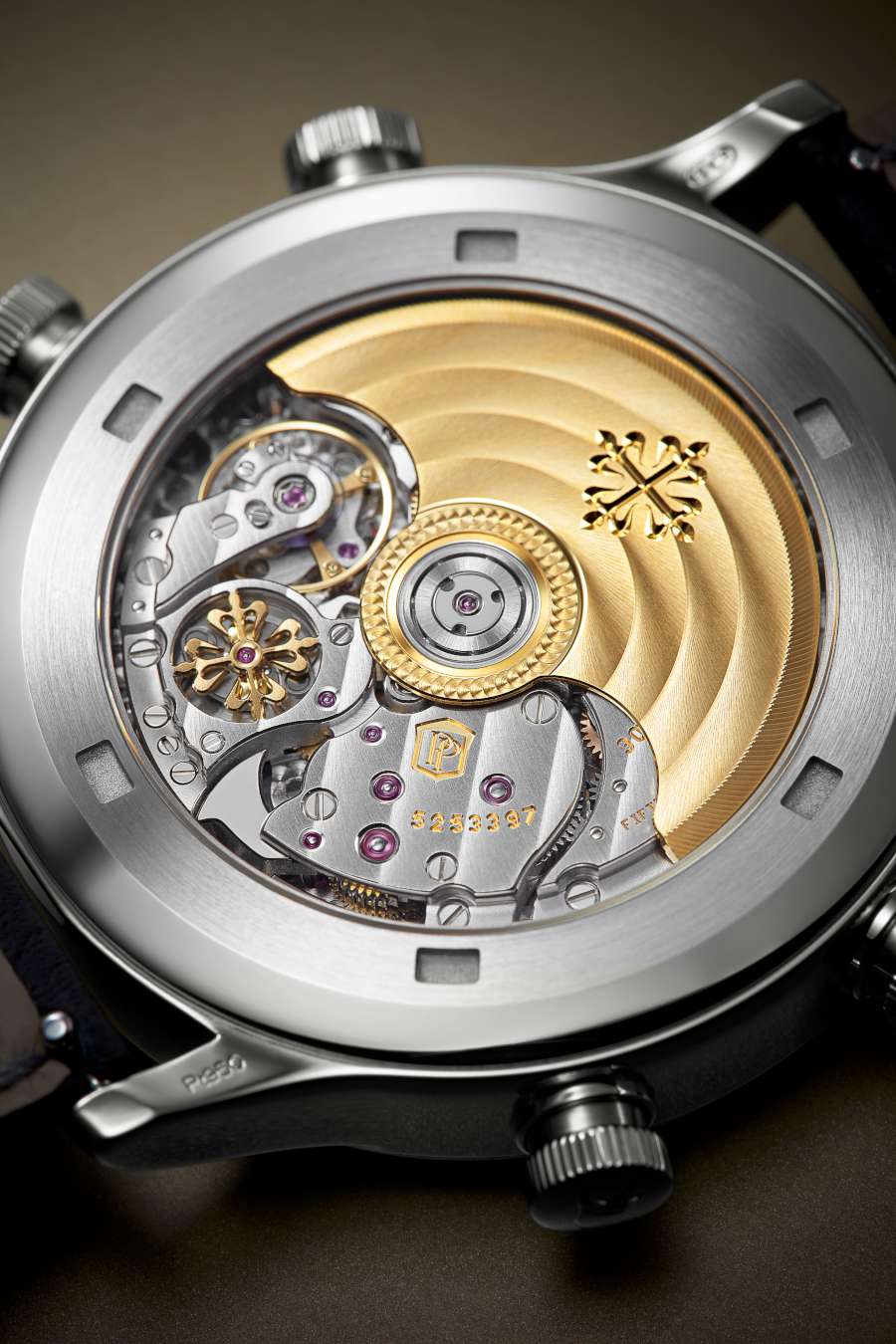 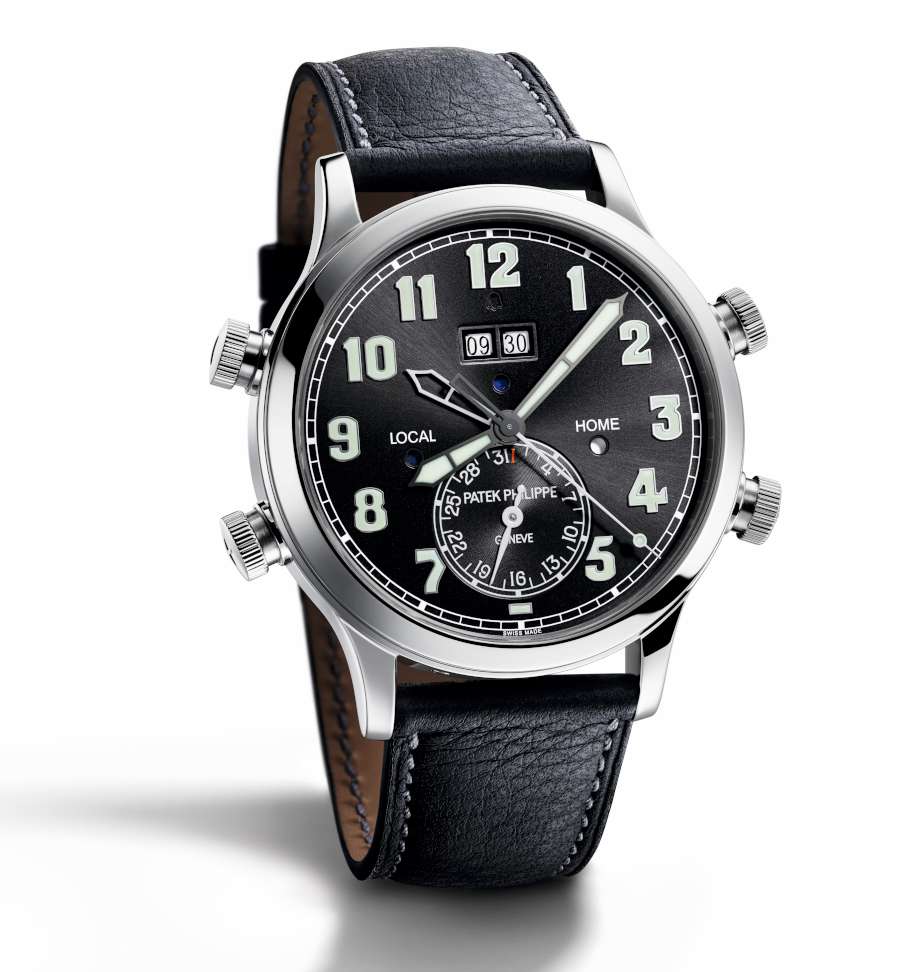