What do you need to launch a new watch brand? A great watch concept, but above all, a good story. Watches by Riskers, which were present at the Baselworld pop-up at Geneva Watch Days in August 2021, tell a lot of great stories. Each design is linked to a hero and bravery, and to a selected charity. They are fairly large at 43 mm, circular with pebble-shaped section, and they have distinctive dials. Brand CEO Pierre Guerrier, who launched his own business in 2018, when he was 40, after working for two decades at Piaget, tells the story. 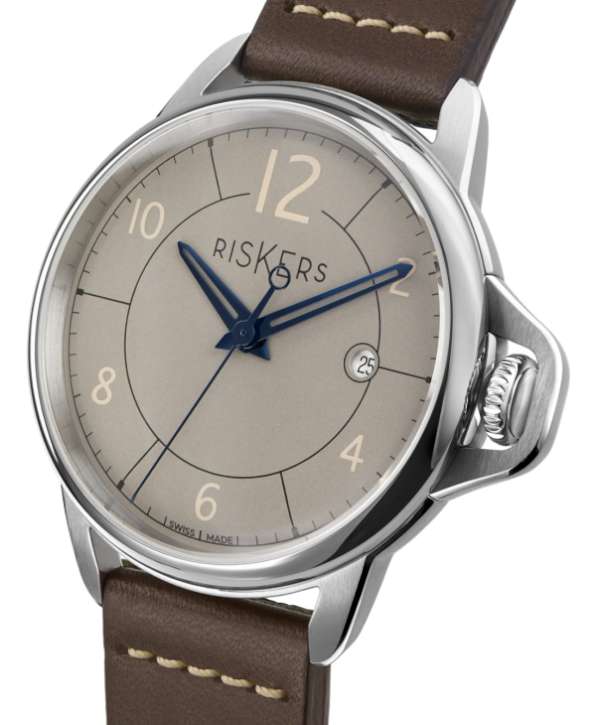 “In the First World War, officers’ timepieces were initially pocket watches, but conditions in the trenches required something more practical. So simple loop lugs were welded to the case, which was rotated through 90 degrees so that the crown ended up at 3 o’clock. A large “12” was painted at the top of the dial to avoid any confusion caused by this rotation. Watches by Riskers retain some of these elements, such as the superb simplicity of the pocket watch’s shape, a large 12, and a loop over the crown, which is not specifically a crown protector, but principally an aesthetic motif.” The watch took shape through the work of Malo Le Bot, a designer at Vacheron Constantin, and the work group also included former Richemont group executives. 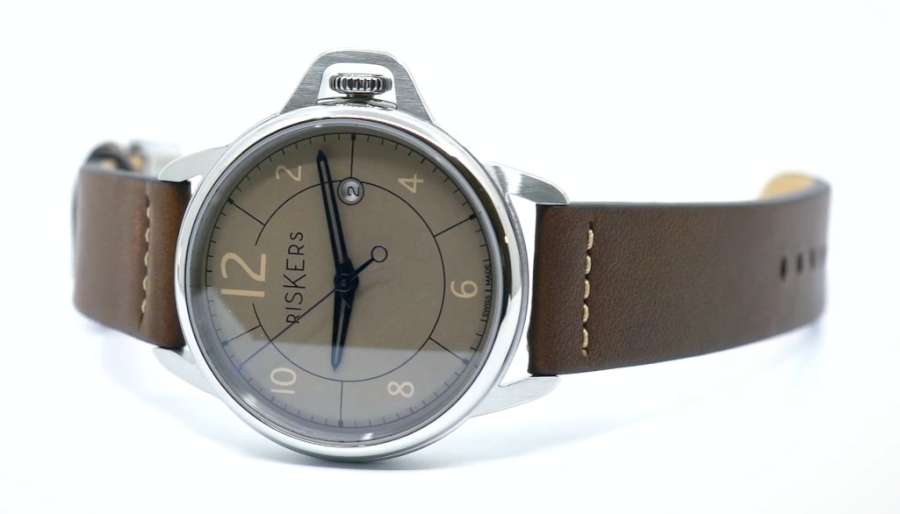 The story behind the watches is summed up by the brand name. Each watch is dedicated to an ambassador who in some way has taken extraordinary risks. “I wanted to launch a watch that brings something new to watchmaking, a piece with a strong identity, that could tell a powerful story”, says Pierre Guerrier. In fact the first watch, “Prolog 1”, celebrates Albert Roche, a WW1 hero who was considered too weak for the army, but who joined up all the same, was injured nine times, captured 1,180 prisoners single-handed, stopped an enemy assault and saved the life of his captain. At the end of the war, when he was just 23, he was still just a private.

Each watch is also linked to a good cause, so that part of the proceeds from the sale of the watch goes to a selected charity.

“I wanted to give people the chance to buy an appealing mechanical watch for under €2,000, and also offer cheaper quartz options. The quartz movements that we use are made in China, but the mechanical watches use Swiss-made movements by STP, who also assemble the calibre and case. Finish is good, and slightly higher on the automatic models”. The automatic watches cost €1,430 inclusive of tax, while the quartz versions cost €590.

Examples of Riskers’ attention to finish can be seen on the caseband, in satin brushed steel to provide a contrast with the bright surfaces, and the domed dial, which requires the use of correspondingly curving hands.

After the first WW1-themed watch, a French army brigade, the Troupes de Montaigne, contacted Riskers with the intention of working on a collaboration celebrating their corps. The result is an attractive piece with a lot of symbolism, such as the sandblasted dial that is a reference to the roughness of rock, the glacier-blue star at 6 o’clock which represents the North Star, the tundra green hands recalling the colour of the division’s batledress, and a canvas strap linked one of their areas of operation, Afghanistan, by its colour named “hot mountains”.

Riskers currently sells their watches online, and they are also present in two multibrand boutiques in Paris, along with a space at the 5-star hotel Alpen Lodge at La Rosière in the French Alps, near the Italian border. Read more and purchase on the Riskers website.