Geneva Watch Days 2021 was the second edition of the event, held in Geneva from 30 August to 3 September 2021. About 20 brands exhibited in a number of hotels, manufactures and boutiques. Baselworld also organized a contemporaneous pop-up with another ten brands. Here we present ten watches at Geneva Watch Days 2021 that caught our attention. They are listed in ascending price order.

Russian brand Raketa’s Leopard 24 celebrates an Akula-class submarine and incorporates metal from the sub in the case. It features Raketa’s no-frills approach to watchmaking, with an in-house movement driving the 24-hour display with unusually-shaped hands, a large knurled crown and a decorated red rotor. €1,550. Read more in this post, or visit the Raketa website. 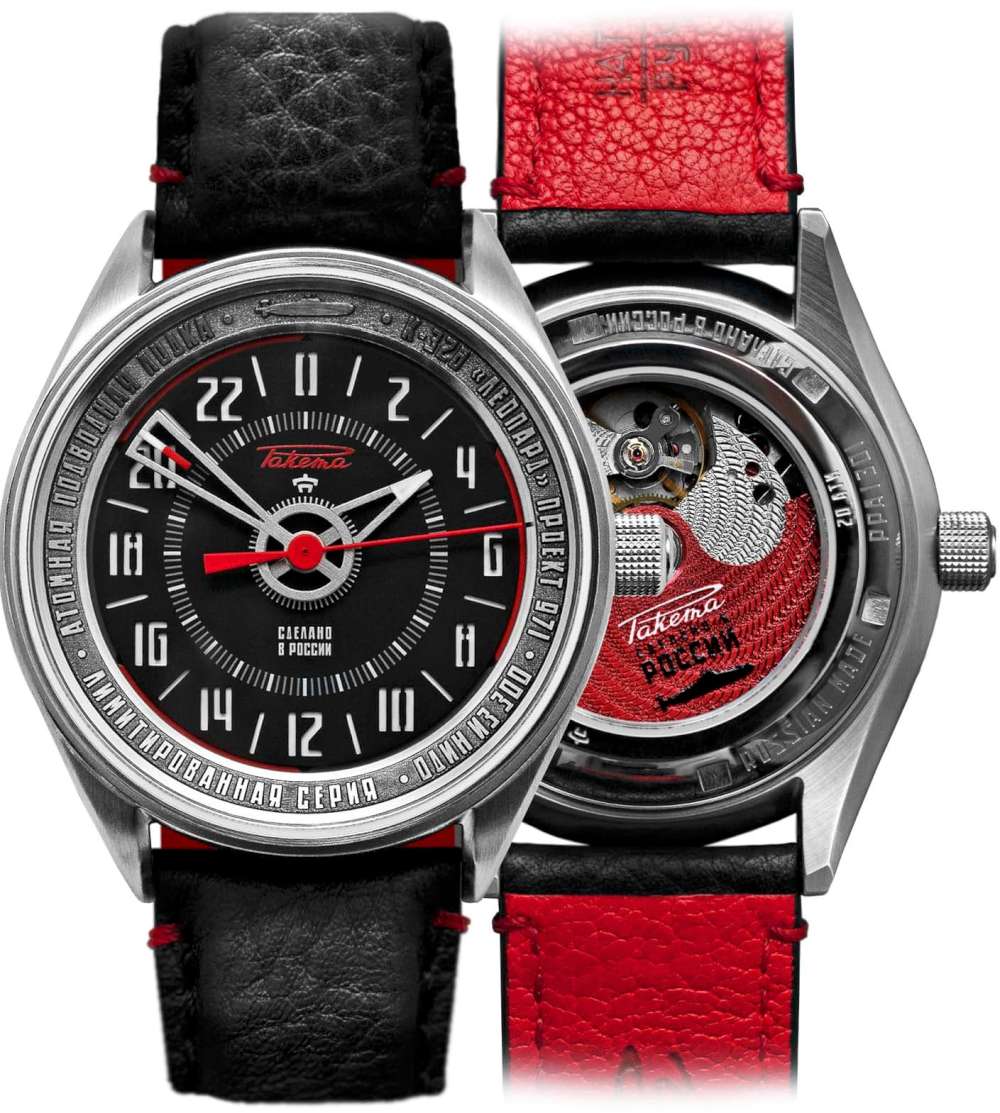 The Oris Acquis Date Upcycle, available in 41.5 or 36.5 mm versions, has a dial made from recycled PET plastic, so that they have random colours in a sort of marbled pattern. They are very attractive, and they are environmentally-friendly in that they draw attention to the problem of plastic in the world’s oceans. The watch itself is fundamentally the Oris Aquis Date with a Sellita SW 200-1 movement. €2,000. 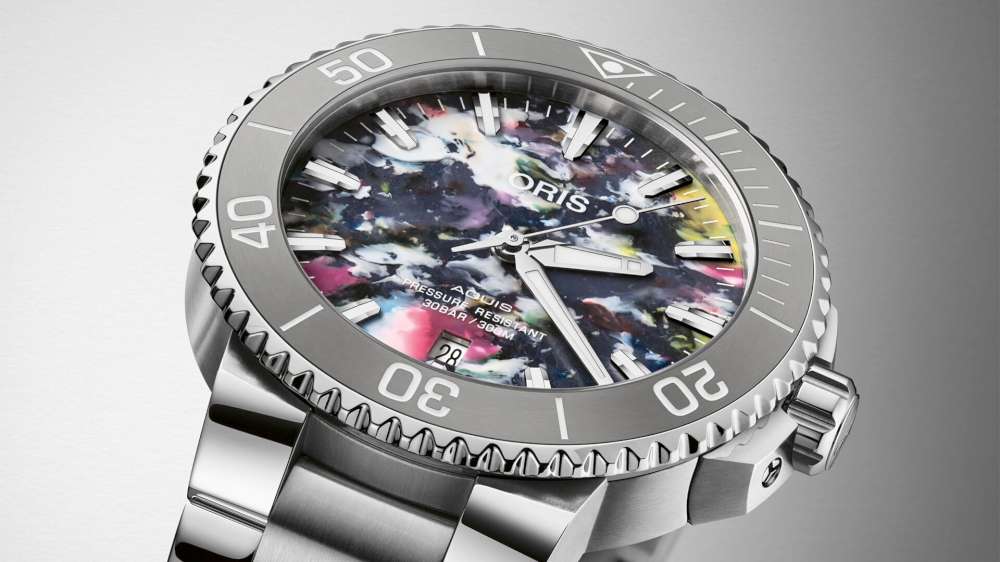 La Semaine by Louis Erard is a good example of how inspired design can transform a basic watch into something very special. It has a standard ETA 2836-2 cailbre with day and date, in a unisex 40 mm case, but Alain Silberstein’s iconic dial design sets it apart. In particular, the day display has been replaced by a series of seven smiley icons that the user can set as desired, which in most cases will see “happy” used for Saturday and Sunday, and “sad” on Monday. This piece has been selected for the 2021 GPHG awards. It is a limited edition of 178 pieces (the number apparently means “strong together” in Chinese numerology), price 3,500 Swiss francs. More information on the Louis Erard website. 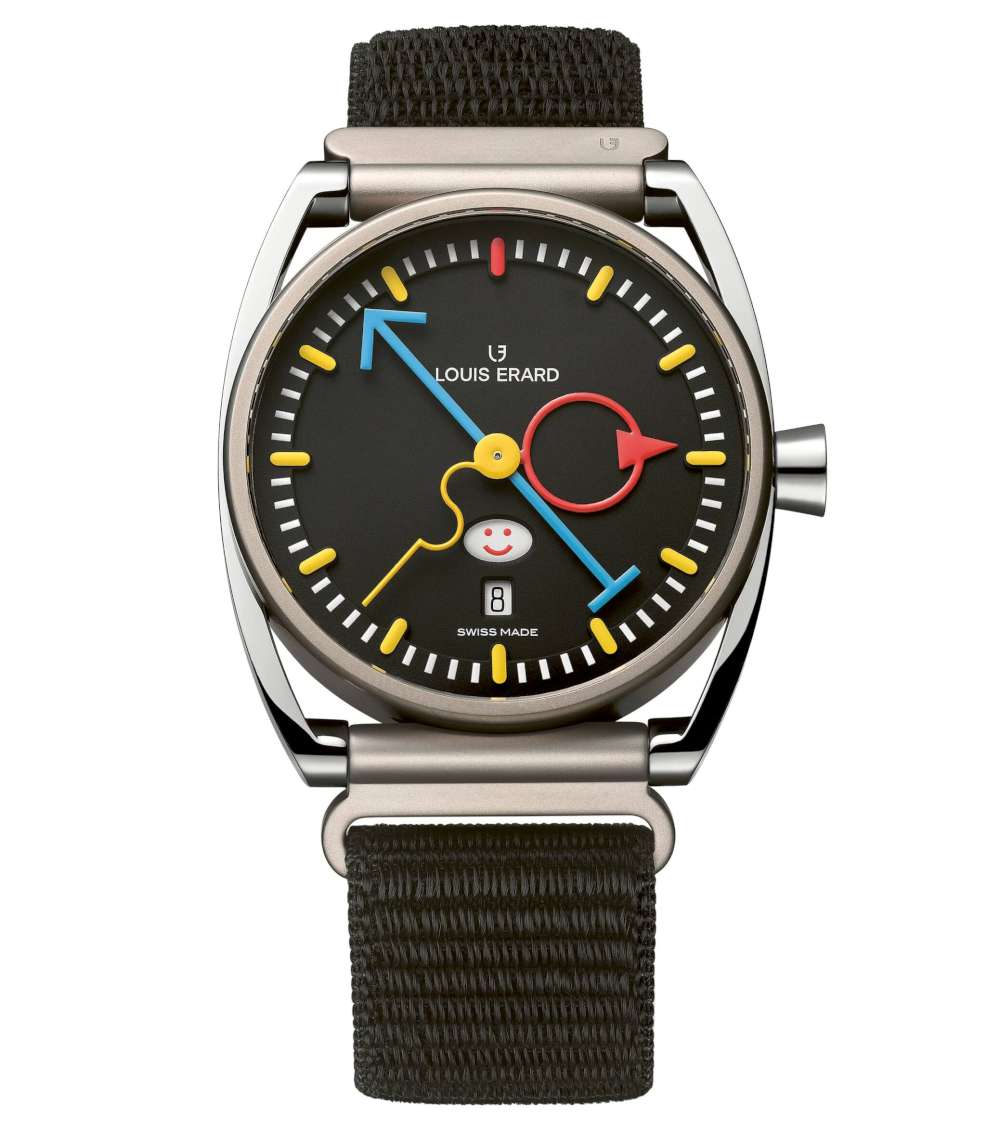 Several high-frequency mechanical watches have been proposed in recent years, but only rarely do they make it into production. TAG Heuer made a series of watches capable of timing events to an accuracy of 100th, 1,000th and 2,000th of a second, and F.P. Journe and Montblanc have also made high-frequency watches. The Zenith Defy is another example. But with Slimline Monolithic Manufacture, Frederique Constant have placed a one-piece silicon oscillator in a watch costing €4,495, a price point never attained by any other brand. The heart of the watch is a silicon component developed by Flexous in Delft, Holland. In a single piece, it replaces the balance, balance staff, balance spring, lever, and all the ancillary spring attachments and jewels, and it doesn’t need lubrication. It runs at a frequency of 40 Hertz, so 10 times faster than most watches. The oscillator runs so rapidly that you can’t discern the cycles; the seconds hand advances 80 times per second, which gives it a smooth gliding motion. Putting this technology into a relatively accessibly-priced watch is an incredible achievement. Frederique Constant have chosen to place this high-tech engine into a watch of very classical appearance, with Breguet hands, central guilloché and Roman numerals. The date disc at 12 o’clock presents “311” at the top, a recurrent problem with most calendar watches having a 31-tooth wheel, as so amusingly pointed out by Steven McDonnell. The steel version is a limited edition of 810 pieces, price €4,495. There is also a gold version in an 81-piece edition, price around €15,000. Read more on the Frederique Constant website. 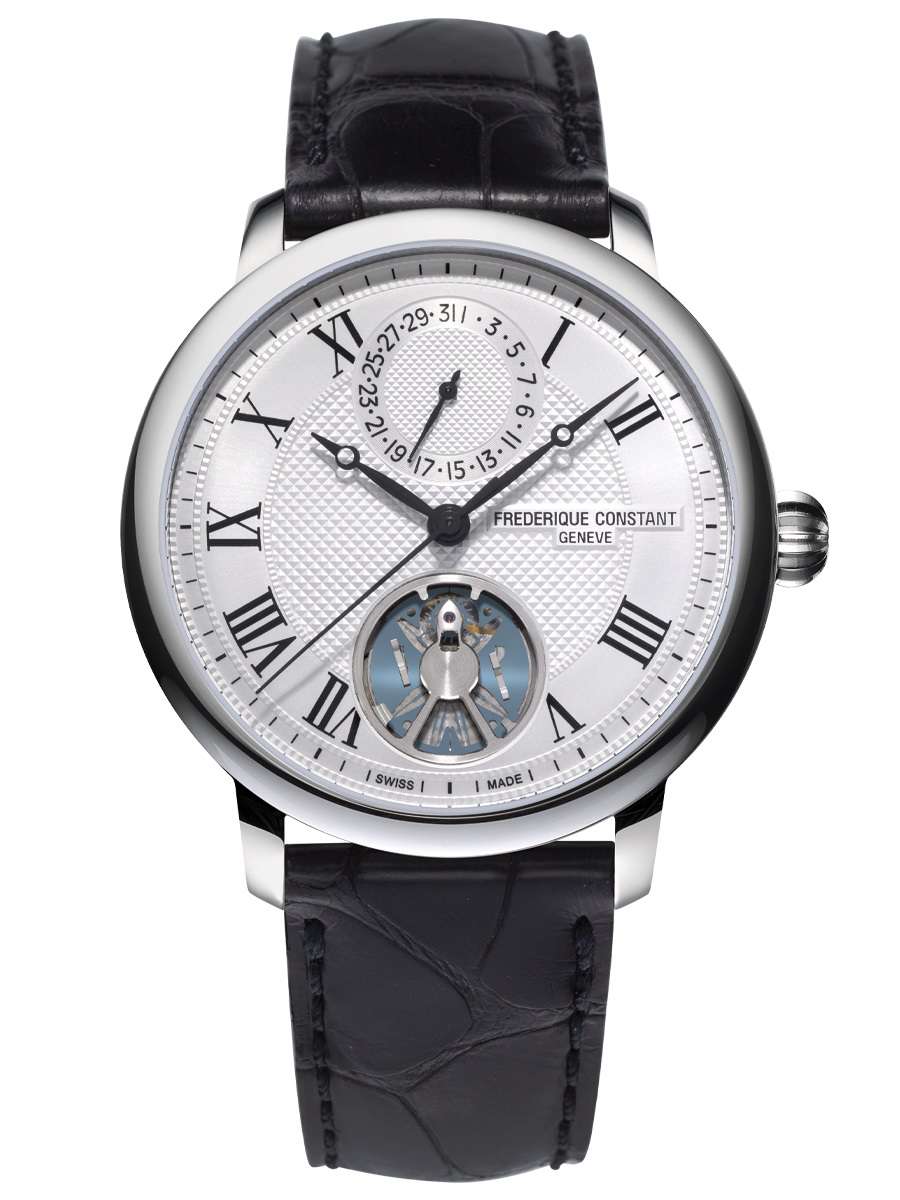 This sporty, lightweight tourbillon watch is made in two versions, carbon and titanium. The design inspiration is based on Italian styling and the proportions created using the Golden Mean, the number 1.618 that appears in the name of the watch. In addition, the designers have striven for simplicity in order to reveal as much of the movement as possible. From 44,500 Swiss francs plus tax. Read this article about the Bianchet Tourbillon, or for further information, see the Bianchet website. 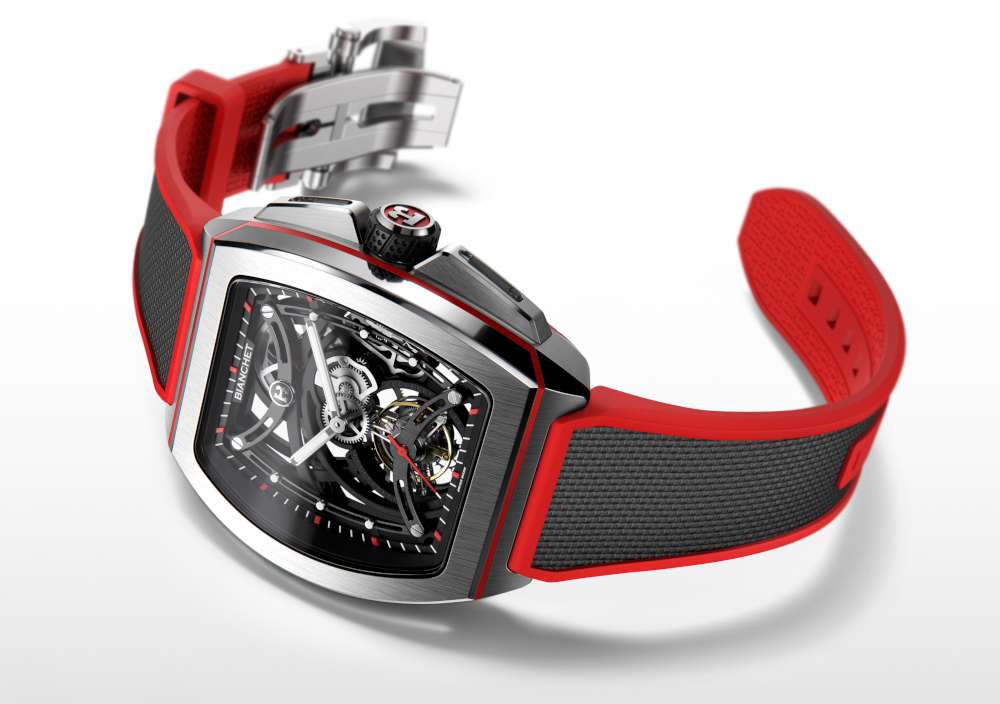 Czapek’s Antarctique Rattrapante chronograph has a classical-looking split-second chronograph mechanism visible dialside, in a very modern case with integrated bracelet featuring the C-shaped links. The chronograph controls are also sleek, with one pusher integrated into the crown guard at 2 o’clock that cycles through start, stop and reset, and another at 10 o’clock that operates the split-second function. It’s an unusual combination of looks, fascinating for its mechanical complexity, a self-winding movement by François Mojon of Chronode. Lots of space is given to the mechanism by keeping the running seconds and chronograph minute counters small, at the base of the dial. So you can see the two column wheels, horizontal clutch, rattrapante clamp and patented satellite minute train. Power reserve is 60 hours, water resistance 120 metres. The Czapek Antarctique Rattrapante Silver Grey is a limited edition of 77 pieces, 46,000 Swiss francs plus tax. More info from the Czapek website. 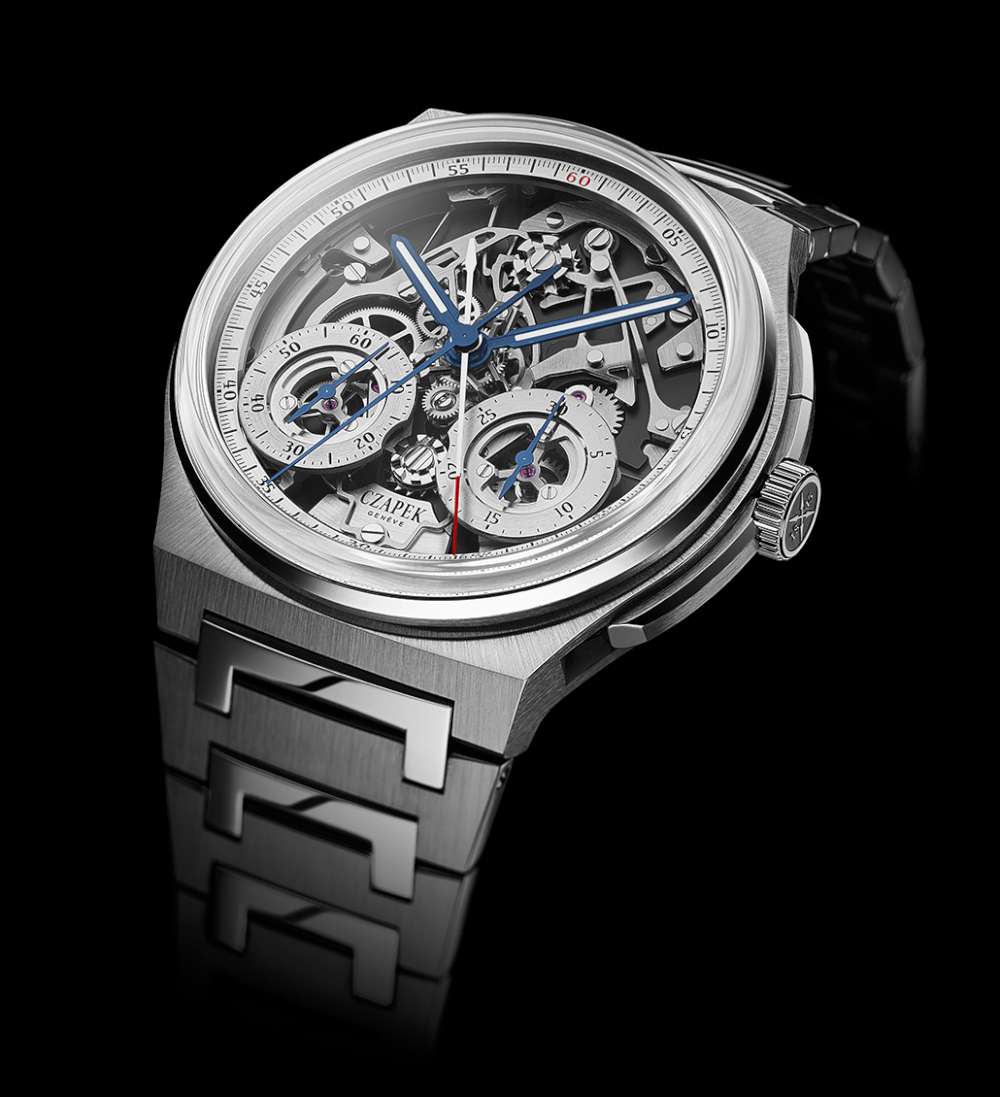 H. Moser’s perpetual calendar has already become a classic: it won the GPHG prize in 2006, and it is still exceptional in terms of its minimalism and user-friendliness. In fact, the date changes instantaneously at midnight, and it can be adjusted forwards or back at any time of day. The months are shown by the short central hand, the date is shown by the extra-large digits at 4 o’clock created by two superimposed discs, and the leap year cycle is shown on the movement side. This year this movement has been incorporated into a Streamliner case, sleek and modern, providing a contrast with the rich detailing of the movement visible through the display caseback. The watch’s practicality is enhanced by the luminous hands and indices, and the 12 atm, 120 metres, water resistance. This unlimited watch costs 49,900 Swiss francs. 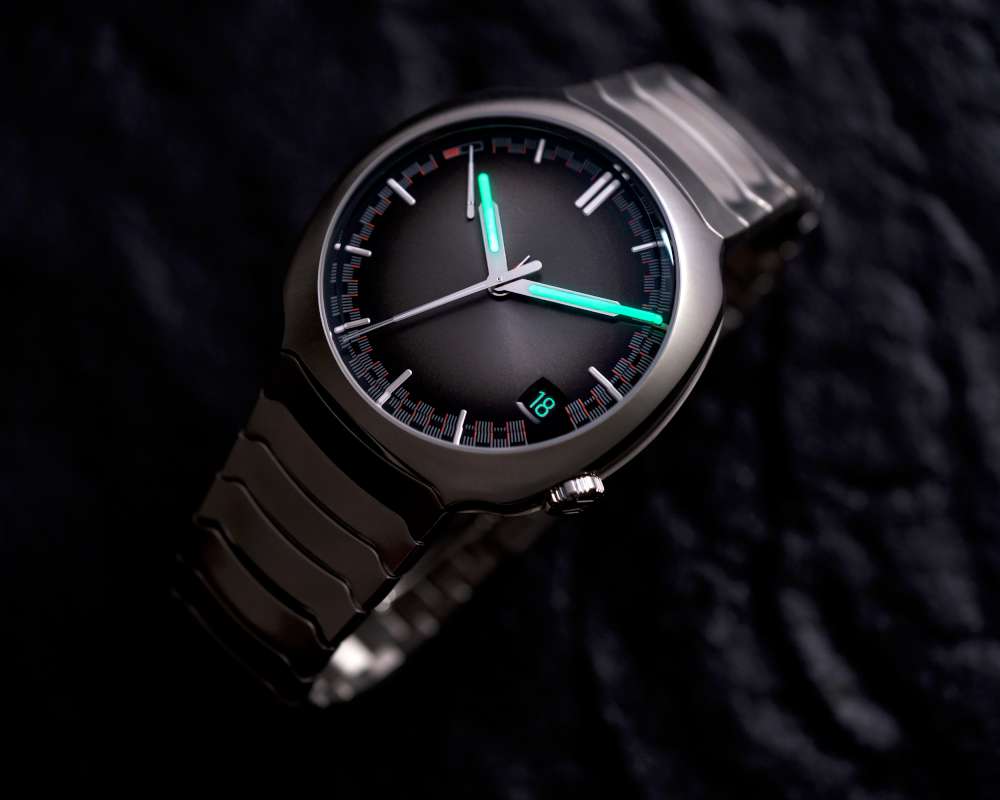 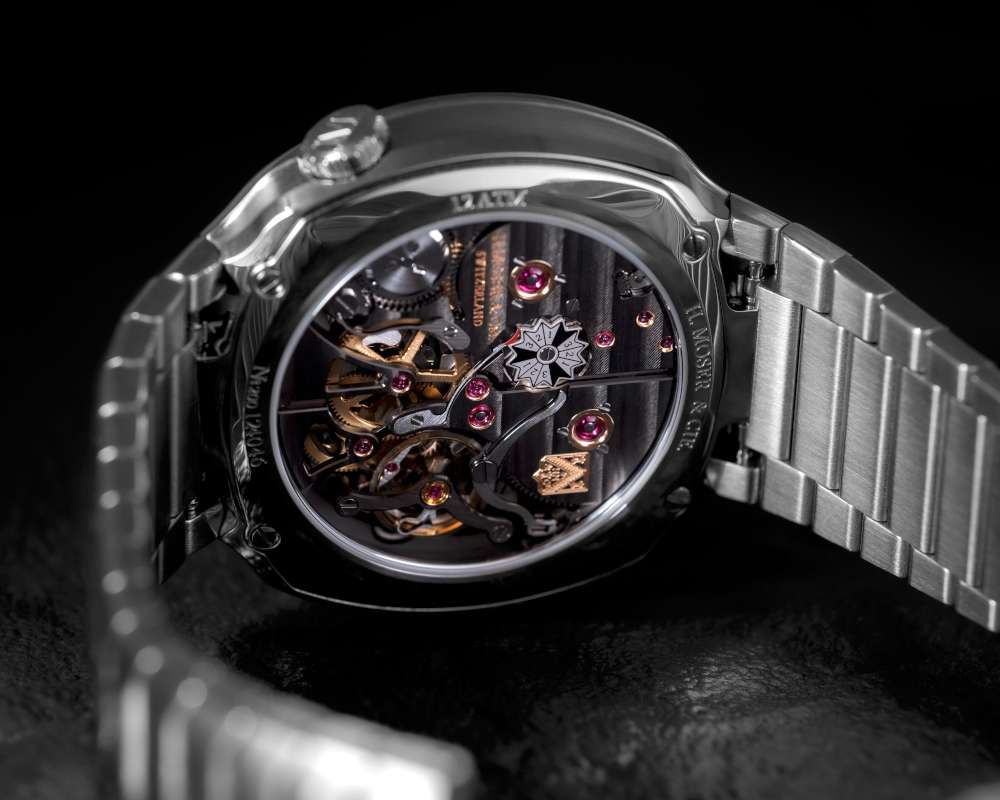 Urwerk has made its distinctive wandering hours display very wearable in this piece, 41 mm in width and 14 mm thick, with a case in the gold-silver alloy named Electrum hallmarked by its distinctive pale-gold colour with a hint of green. The watch is powered by a self-winding movement with the Planetary Turbine automatic system. About 60,000 Swiss francs plus tax. Read more in this post about the Urwerk UR-100 Electrum, or see the Urwerk website. 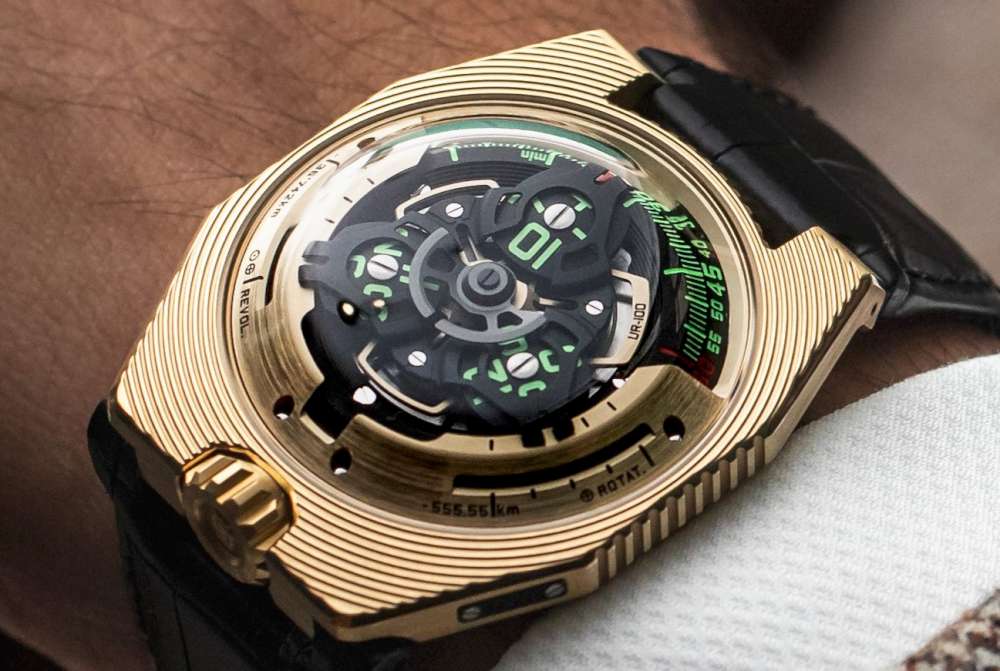 Girard-Perregaux’s celebrations for its 230th anniversary include the Tourbillon with Three Flying Bridges, a spectacular watch that combines minimalist understatement with extreme virtuosity. It is a watch deconstructed to the extreme, the dial reduced to hour markers on the inside of the bezel, and a movement suspended on the brand’s iconic bridges. The latter support the gear train, barrel and tourbillon, and also act as the mainplate. Like the case, the bridges are in pink gold, but they have a black PVD coating, in line with the concept of “discreet luxury” and “shaping the new for those in the know”. The one-minute tourbillon is in titanium, and with its 79 components it weighs just 0.25 grams, minimizing energy consumption and giving the self-winding movement a power reserve of 60 hours. It comes as a surprise to discover that this is a self-winding watch: the micro-rotor is below the barrel and has the watch’s model name engraved on its vertical sides. Price 138,000 Swiss francs. 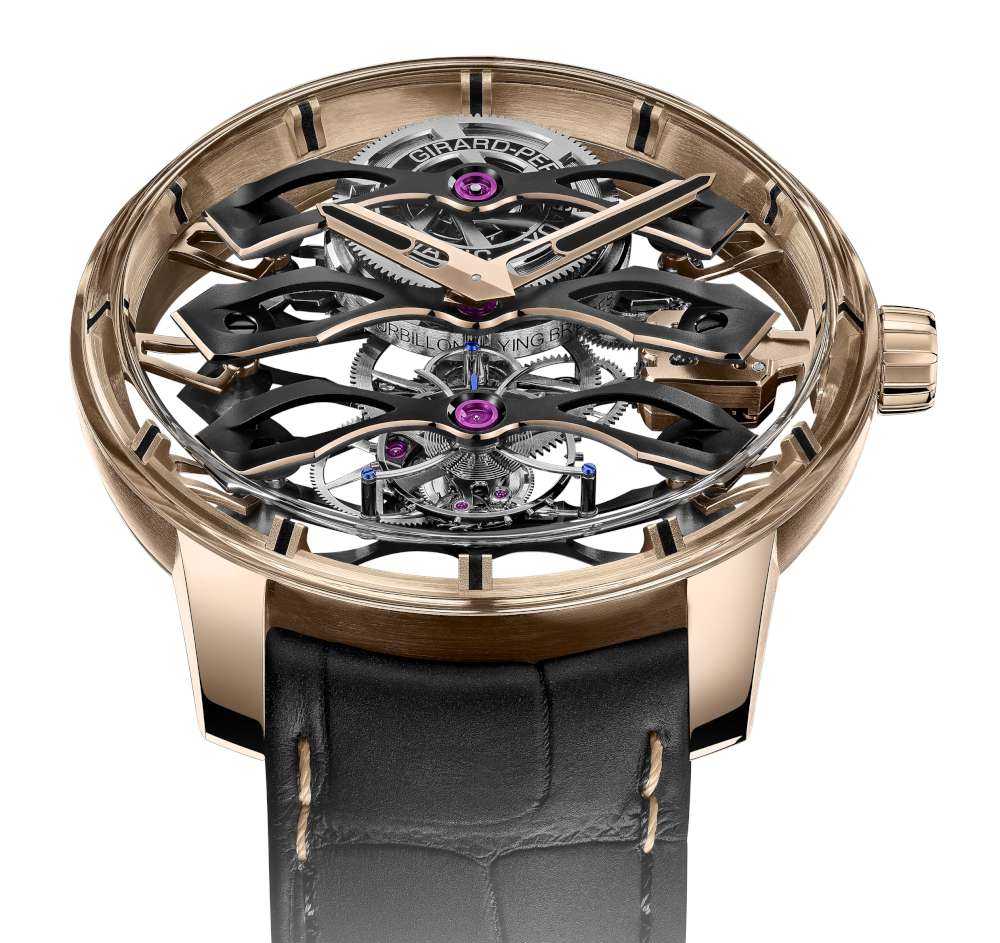 The LM Perpetual is a superb perpetual calendar, with the ground-breaking movement by Stephen McDonnell that has made it one of MB&F‘s best sellers. The latest version is this lovely version in palladium with the highlight colour verdeaux, a sort of greenish-blue grey. Stephen himself describes the movement in an article on timetransformed.com. 178,000 Swiss francs, a 25-piece limited edition. Read more on the MB&F website. 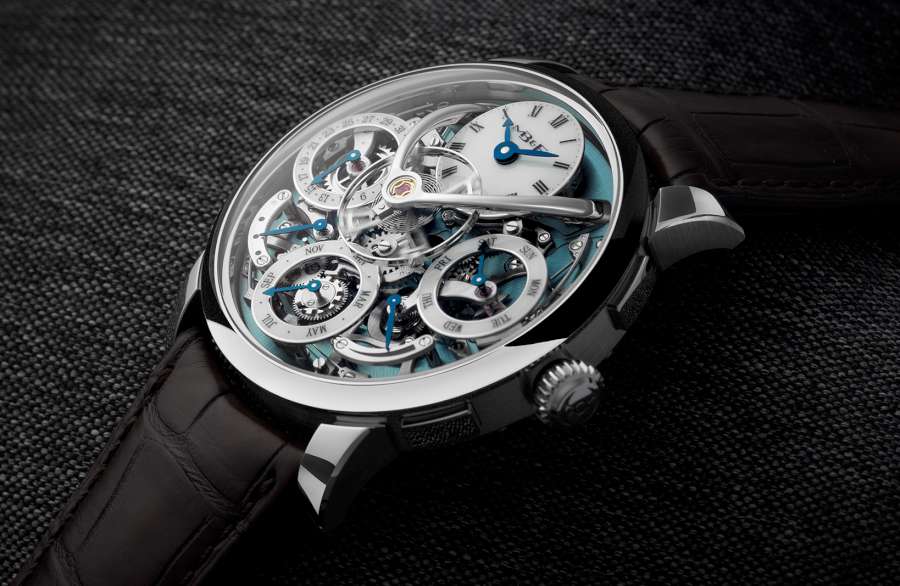 De Bethune combines a contemporary display with a classic watch in this piece whose case can be swung around with a touch of the finger. The contemporary side displays the ultra-light 30-second tourbillon and the characteristic De Bethune delta bridge; the classical side has a sculpted dial with convex levels and a central section decorated with guilloché. This watch, entered into the 2021 GPHG competition in the Tourbillon category, is a 10-piece limited edition, price 215,000 Swiss francs.

The Chronomètre FB RS by Ferdinand Berthoud has all the precision that hallmarks the brand’s watches, with a tourbillon in addition to the constant force mechanism. Seconds are shown by the centre-sweep hand, minutes on the subdial at 12 o’clock, and hours on the disc at 2 o’clock. The watch incorporates response to feedback from collectors, who said that they would like to be able to choose the case shape, and seem more of the movement. Read more about the spectacular Ferdinand Berthoud Chronomètre FB RS in this article. Or visit the Ferdinand Berthoud website. 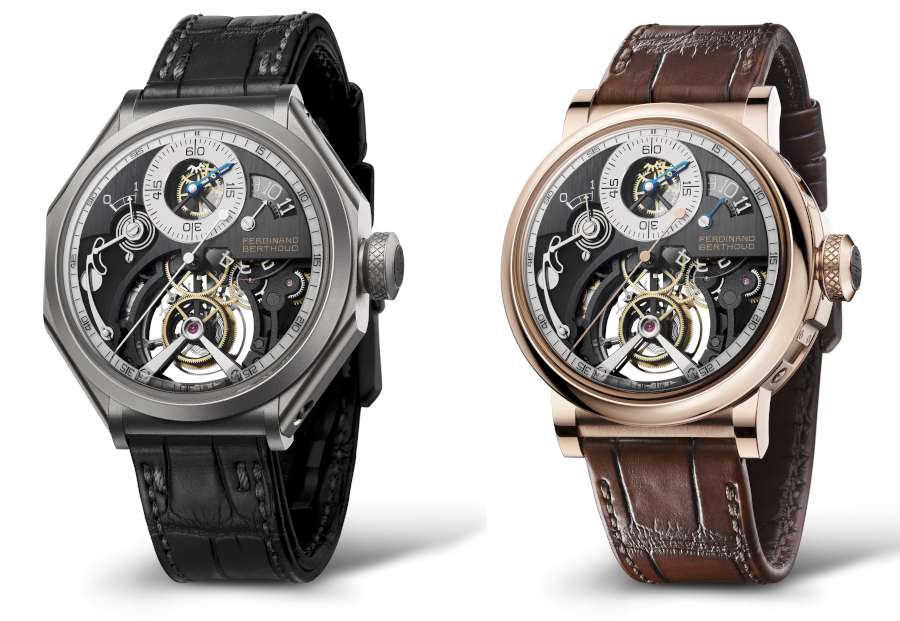