Chronograph minutes, up to 20 minutes 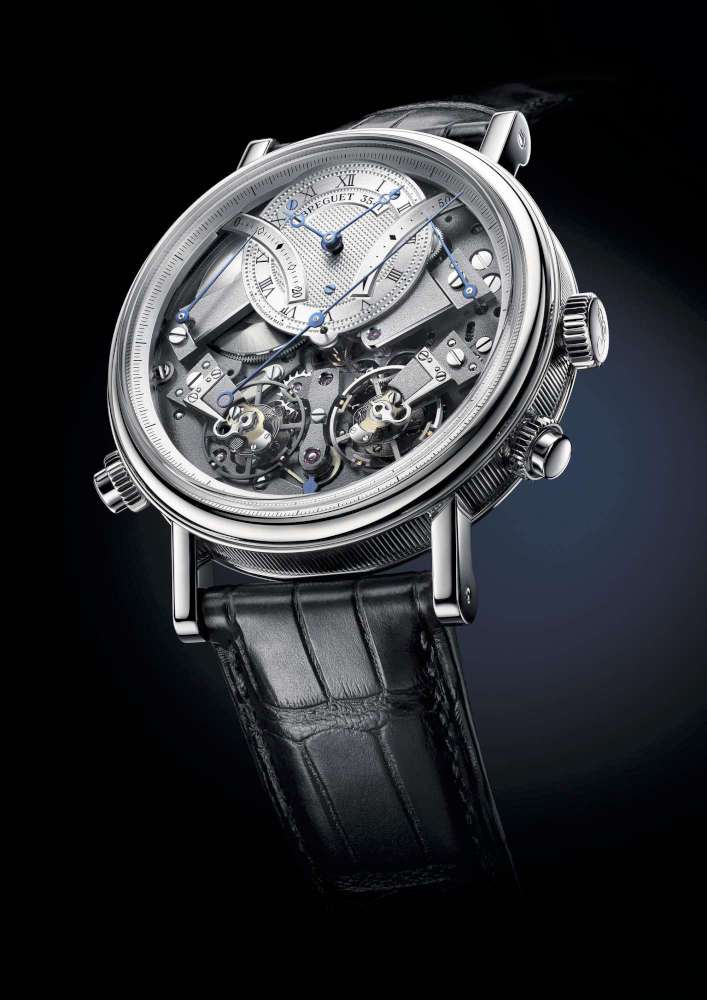 The 7077 chronograph does a lot of things differently with respect to a normal chronograph. The first thing that you notice is that there are two balance wheels at the base of the movement. Then you see that there are no subdials, and the pushers are differently positioned, with one at 4 o’clock, one at 8 o’clock. 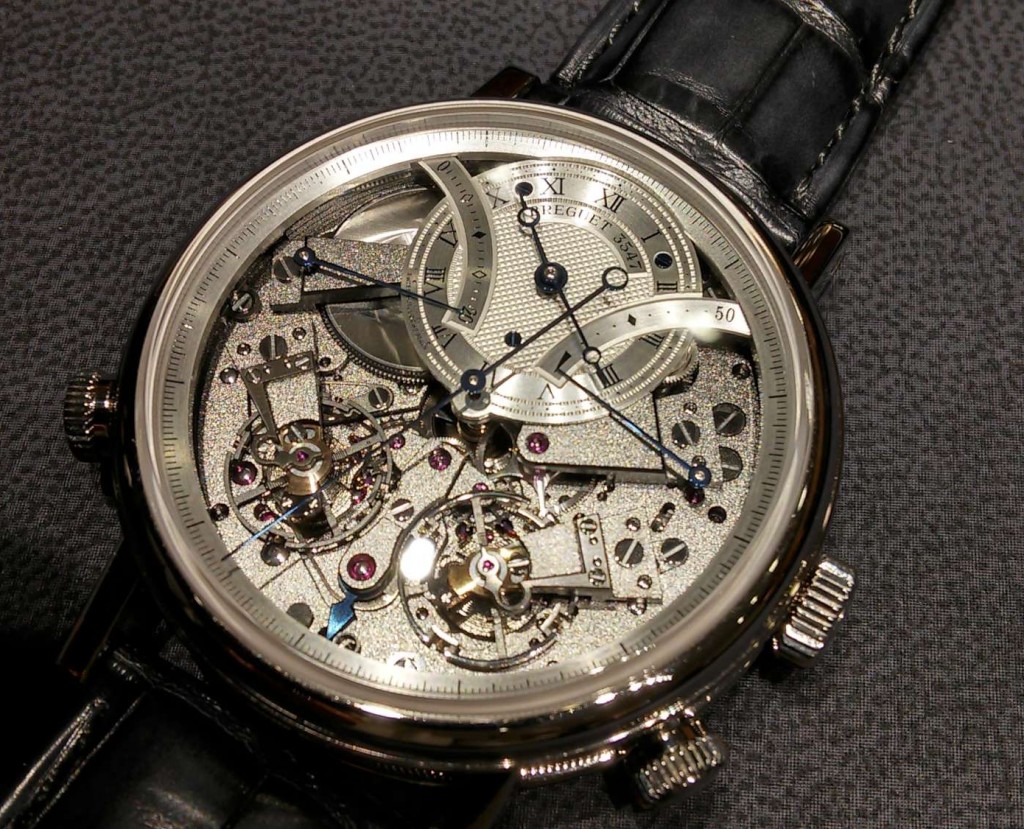 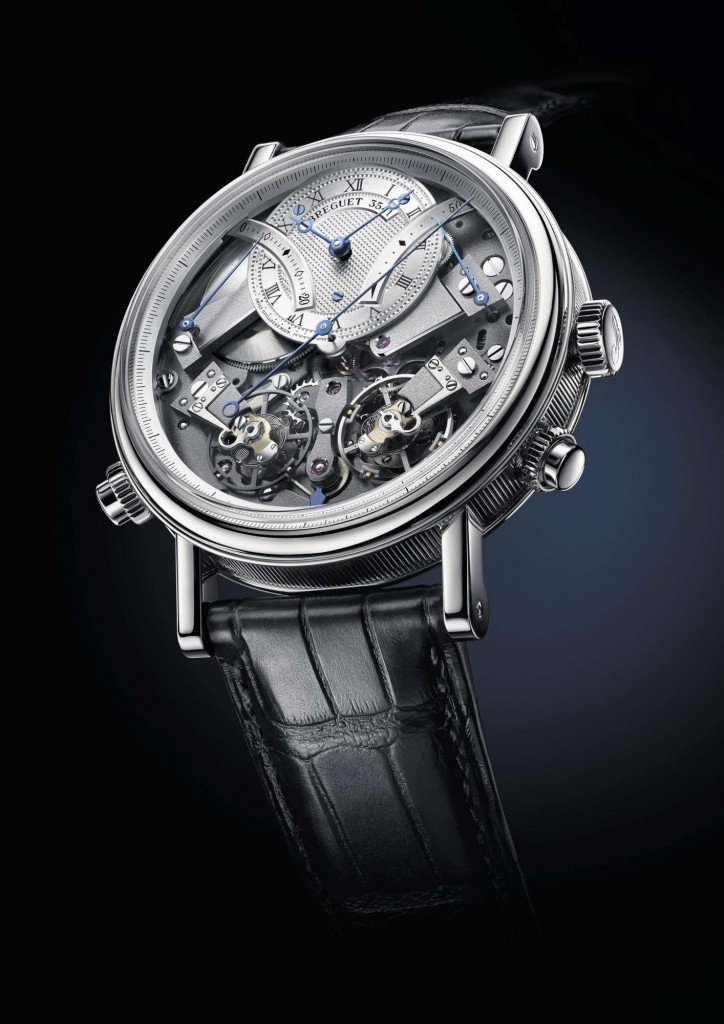 Normally, this sort of arrangement would call for two barrels, one providing the energy for the time-function movement and one for the chronograph, but this would require double winding and take up more space. In actual fact, there is just one barrel for the main gear train, and the energy for the chronograph is provided when the user presses the stop-reset button. This charges a flexed-blade spring, and that simple action of pressing the pusher to reset the chronograph provides the system with enough energy to measure 20 elapsed minutes. So this is the maximum time that can be measured, with a central hand for chronograph seconds and a hand at top left to indicate the elapsed minutes.

There is a lot of research embodied in this piece, and a patent has been filed for the chronograph blade spring and gear train. Because one of the features of the Tradition collection is that all parts of the movement are visible above the baseplate (the collection was launched in 2005 and created a precedent for this “naked” aesthetic approach that was later copied by many brands), in this watch, for which the designers wanted to maintain a symmetry between the two balance wheels, they had to make the chronograph wheel lighter than the other so that it could run faster, at 5 Hertz. So the chronograph balance-wheel is in titanium, finished with a DLC coating so that it is visually similar to the going-train balance wheel. 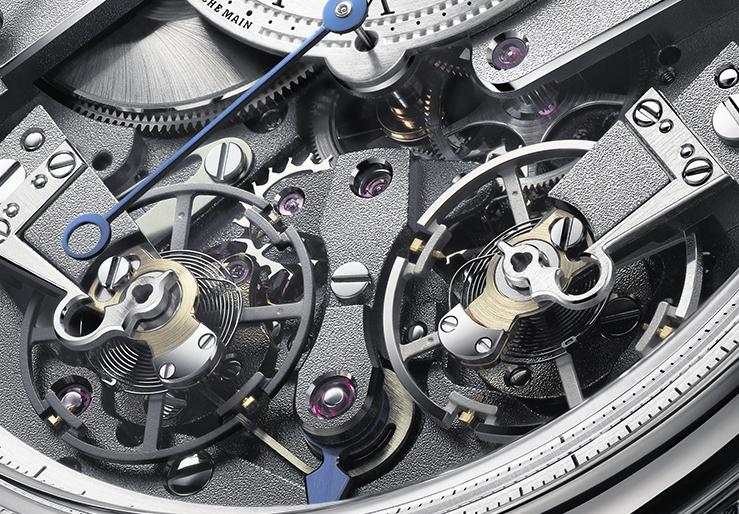 The two gear trains are separate, and so there is no need for the usual column-wheel chronograph activation system. On the back of the watch, a T-shaped chronograph control component can be seen, a reference to an 1825 watch, the reference 4009 made by Abraham-Louis Breguet and shown in the photo below, courtesy of www.breguet.com 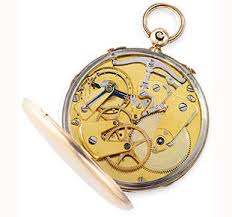 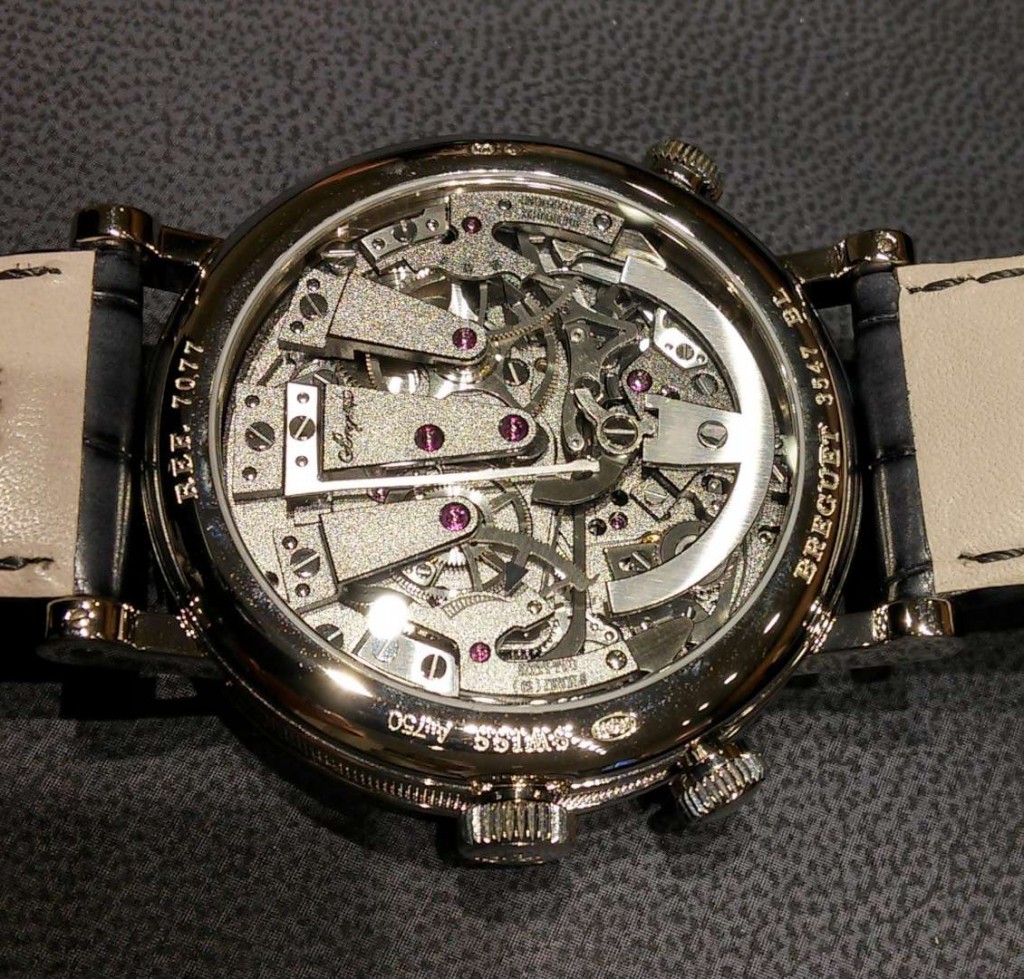 The dial for hours and minutes is at the top of the watch, flanked by the chronograph minute counter on the left, and power reserve indicator on the right. The two balance wheels are at 4 and 8 o’clock, and there is a chronograph running indicator at 6 o’clock The pusher used to start the chronograph is at 4 o’clock, and the stop-reset button is at 8 o’clock. It is the reset action that charges the chronograph blade spring, and so this position is ergonomically logical because you can you your most powerful finger, the thumb, to press it. The watch has all the Breguet hallmarks such as blued Breguet hands, fluted caseband and individually-numbered dial. The case is 44 mm in diameter, in white or pink gold; the movement is the Calibre 580DR. Price €73,200 for the white gold version, €72,000 for the pink gold version.

This is a beautiful piece, one of the highlights of Baselworld, comparable more to a work of art than an everyday watch. The chronograph seconds scale has no numerical indications, and the chronograph minutes scale is also rudimentary. I don’t really understand the utility of a chronograph running indicator given that the chronograph balance wheel is only running when the chronograph is operating. But the piece is a symphony of watchmaking and will no doubt become a collector’s piece.