Sapphire disc with continents cut out from the blue oceans, to reveal the coloured day/night disc below

Time zones rotate together with the continents disc

Pusher to change time zone: with each push, the city ring rotates to the next time zone, the hour hand moves one hour, and the continents, day/night and 24-hour indications also move 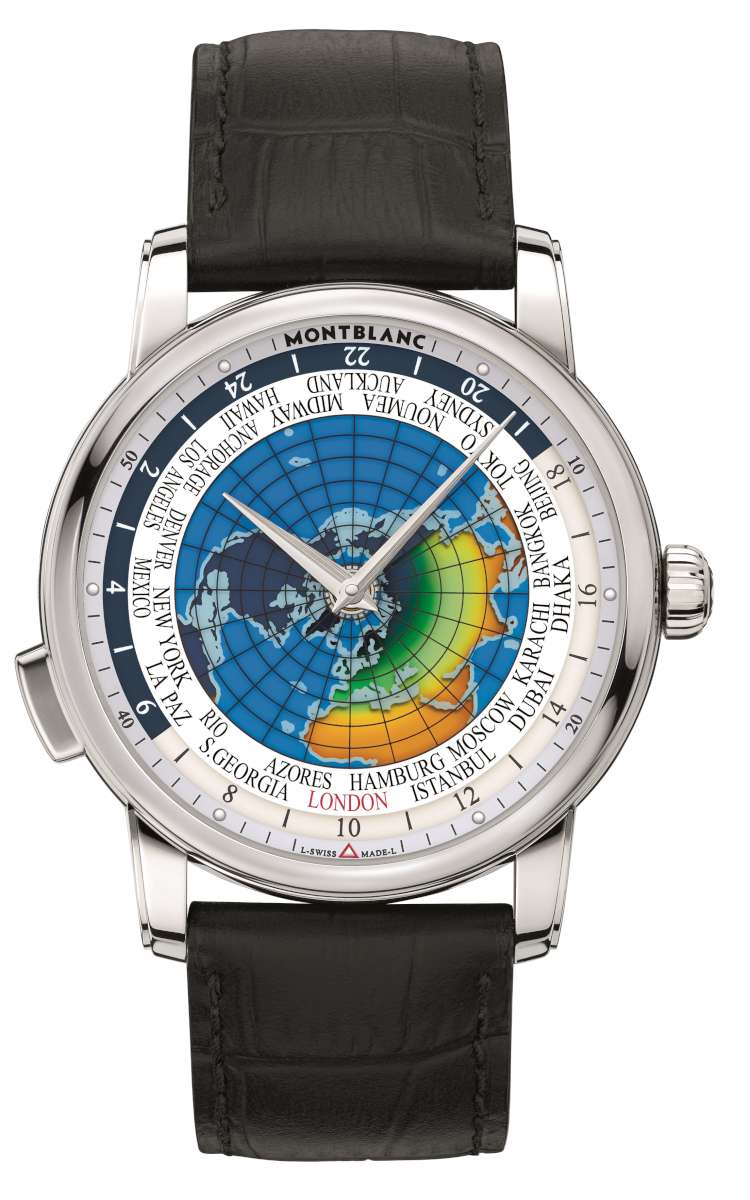 With respect to the previous version of this watch, Montblanc Heritage Spirit Orbis Terrarum, this piece is much more attractive, with its colourful globe, and more expensive, €5,890 as compared to €4,990. The case has also been increased in size from 41 to 43 mm, and the caseband has a stepped profile. 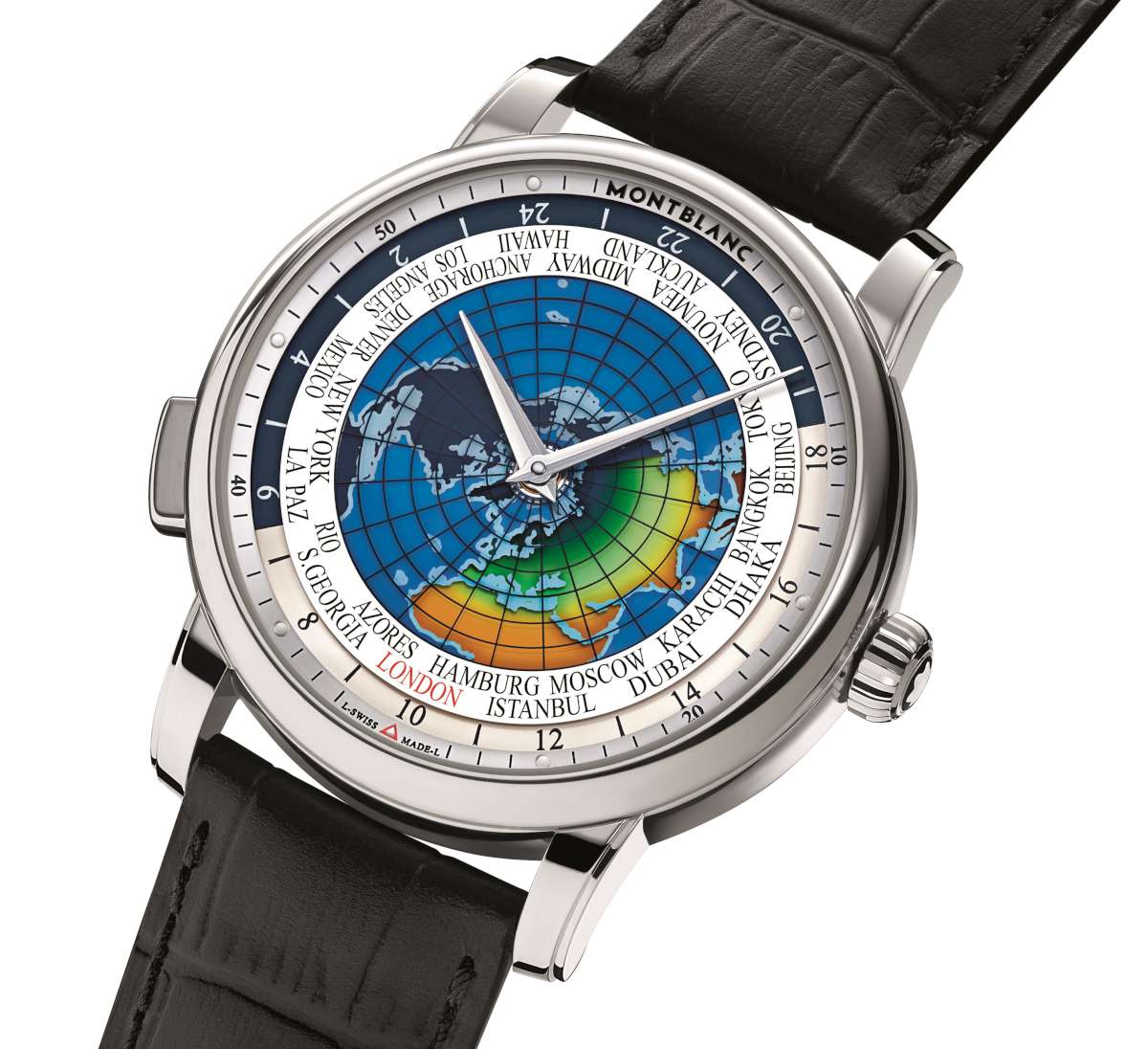 The world-time function is based on two sapphire discs that show the globe seen from the north pole, with the oceans shown in blue. Cut-outs for the continents reveal the day/night disc below, dark blue for the night, and yellow/green gradient for the day. The top continents disc is linked to the names of the cities indicating different time zone; the day/night disc is linked to the 24-hour ring. Reading the watch is simple: local time is shown by the hour and minute hands, and the time in any other place in the world can simply be read off from the 24-hour ring in correspondence with the respective cities. 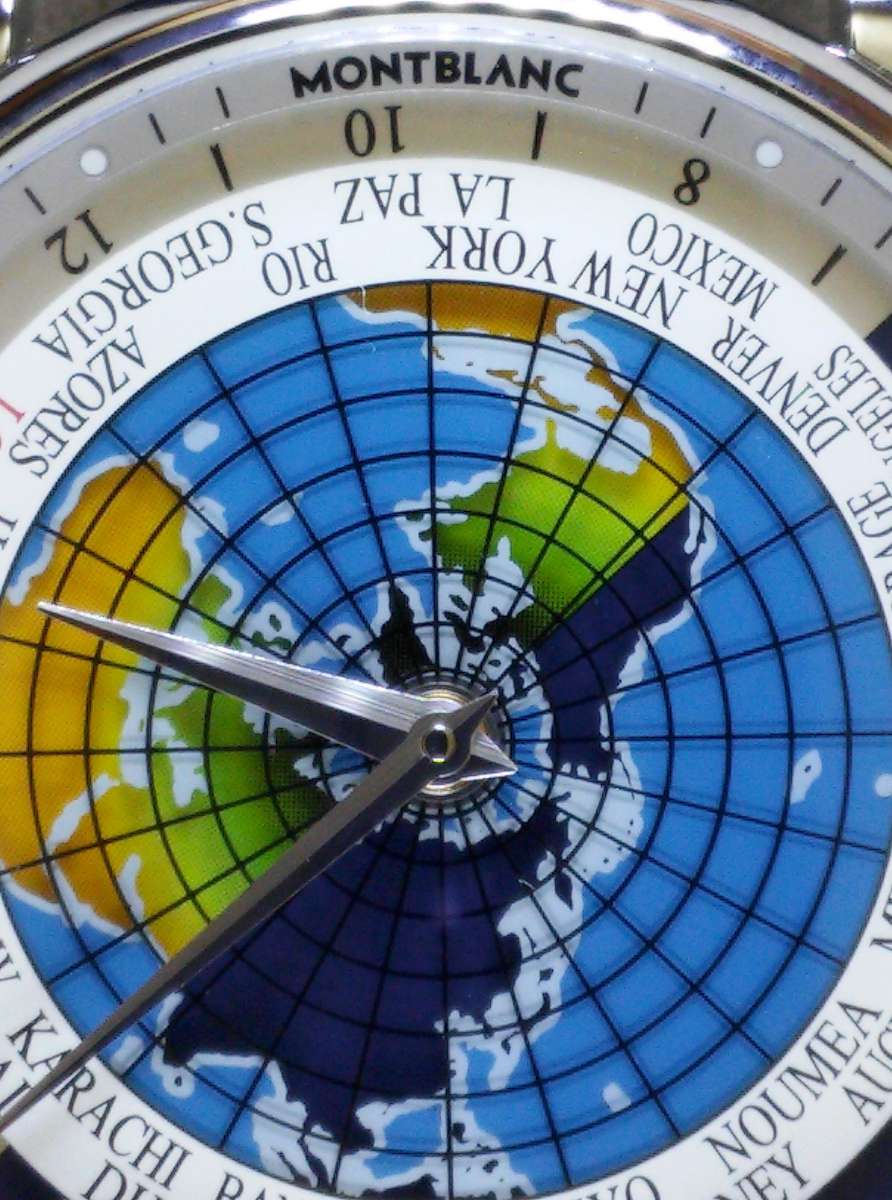 Setting up the watch is easy too. First, you set the local time city (Beijing in the photo above) by using the pusher at 8 o’clock to move the cities disc so that the local time zone is above the small triangle at 6 o’clock. Then you set local time using the crown: as you move the hands forwards or back, the day/night disc and the 24-hour ring move correspondingly. The watch is now set up for use. When you are travelling and change time zone, you use the pusher at 8 o’clock to align the new time zone against the triangle at 6 o’clock, and by doing so, the hour hand also moves in one-hour jumps, along with the continents, day/night, cities and 24-hour discs.

The watch is attractive with the contrast between the earth’s different climate zones, the oceans and the black grid lines providing a colourful motif. It has a 43 mm case in stainless steel, 11.87 mm thick, water-resistant to 50 metres. I’m not sure about the SuperLuminova in this watch: there are small white dots on the external minutes chapter ring which could be luminescent, and the dial is marked L-Swiss Made-L in which the L’s refer to the SuperLuminova, but the hands are simply in steel.

As you can see (apologies for the identification stickers in the photo below), the movement seen through the caseback has nothing visually exceptional. It is in fact a Sellita SW200-1, used to provide the basic time functions. To this, Montblanc have added the extra module that provides the time zone functions. The world-time module is designed and built in-house, and it is closely integrated into the base movement (not simply placed on top), which enables the total thickness of the movement to be kept down, so that the complete watch is slim and wearable at just under 12 mm. The movement is self-winding, with a power reserve of 42 hours. 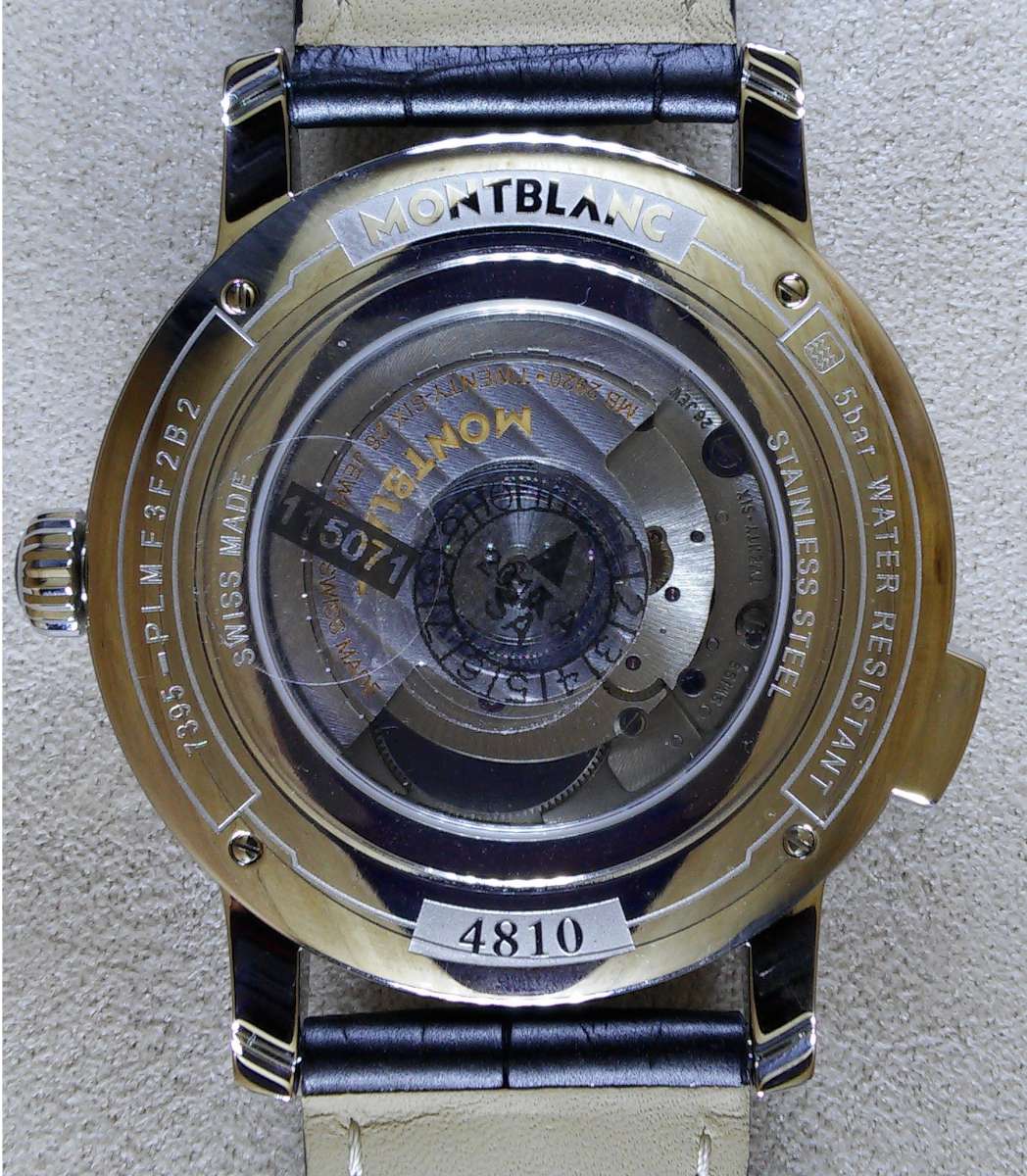 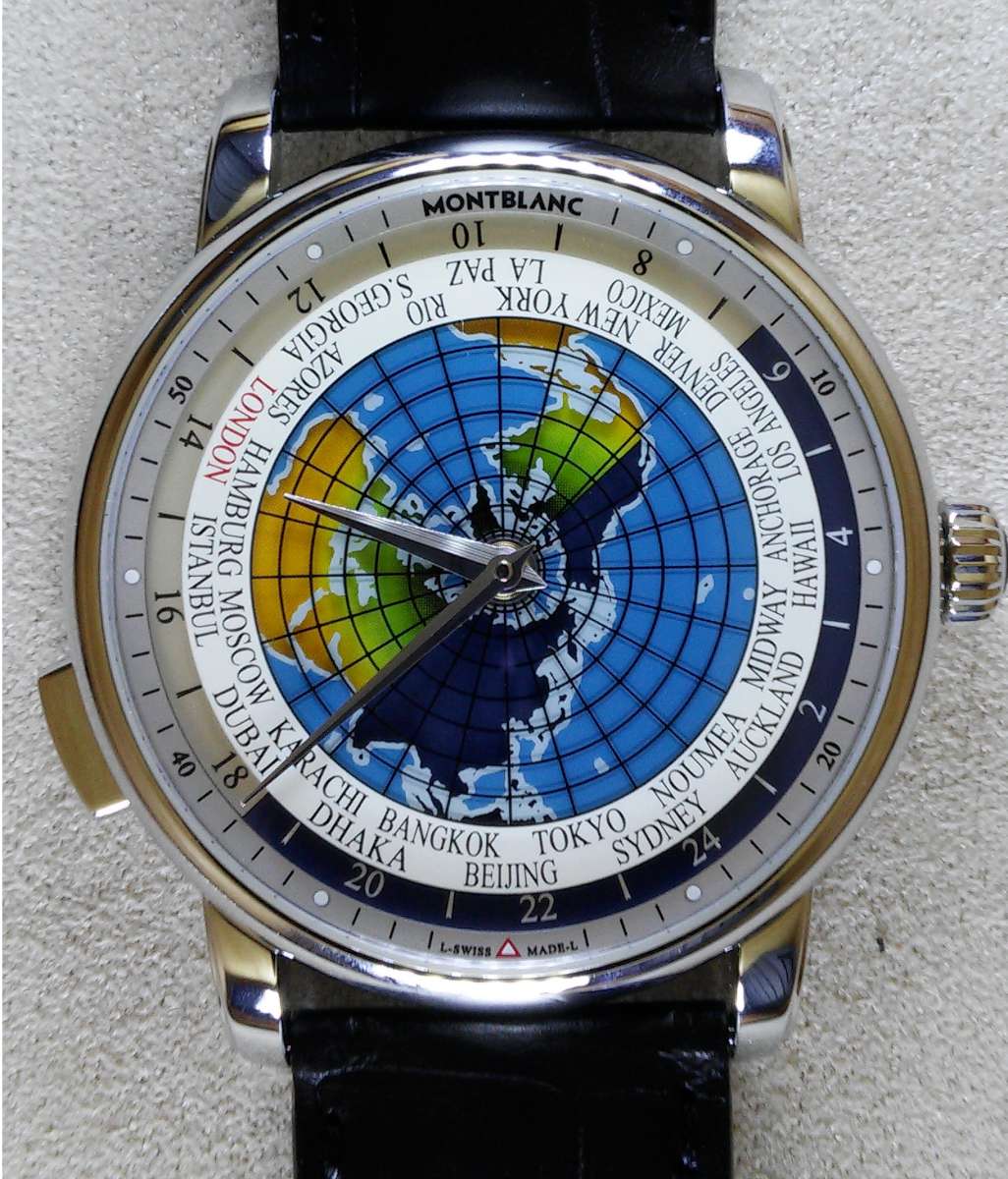