The 103-Ti IFR is a chronograph by Sinn that meets the specifications of German pilot’s watch standard DIN 8330, a new standard for pilot’s watches that came into operation in March 2016. DIN 8330 is based on the previous TESTAF technical standard developed by Sinn, and its formulation was devised by a team comprising Sinn, Stowa, Glashütte Original, Aachen University of Applied Sciences, Lufthansa Cargo, Airbus Helicopters, insurance company DNV GL, and others. DIN 8330 requires clear legibility both day and night, compatibility with night vision equipment, the ability to operate the watch while wearing pilot gloves, accuracy at ranges between -15°C and 55°C, resilience to repeated low and high air pressure excursions, resistance to water and other aerospace fluids such as fuel, lubricants and de-icing fluid, resistance to vibration, impact and centrifugal force, resistance to magnetic fields, and strap strength. 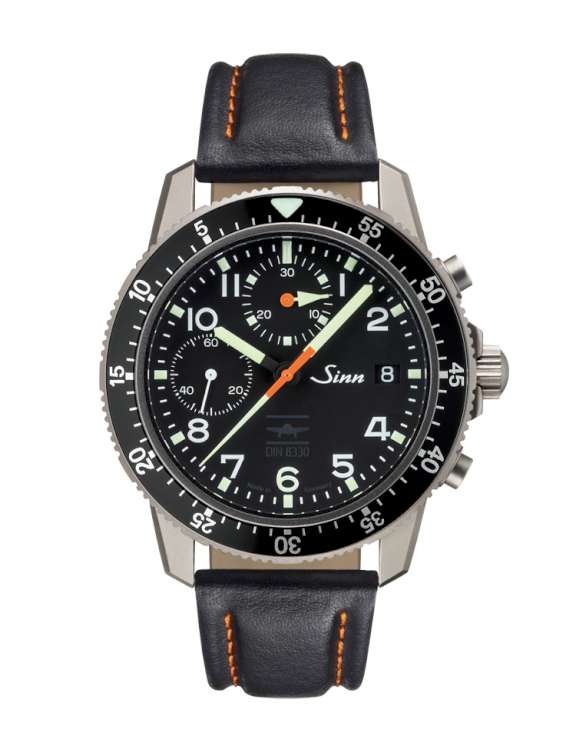 Sinn were the prime movers in developing the new standard, which helps define a pilot’s watch and gives it a technical benchmark comparable to ISO 6425 for diver’s watches. The most significant characteristics of a DIN 8330 watch include exposing the watch to a magnetic field of 4,800 A/m and ensuring that precision remains within +/-30 seconds/day. 4,800 corresponds to 60 gauss, which doesn’t sound like very much, considering Omega’s achievements with its movements resistant to 15,000 gauss as part of its new METAS certification. Water resistance entails testing the watch immersed in water to a depth of 10 cm for 1 hour, at water temperature excursions from 20 to 40°C: its rating is for a pressure resistance of 20 bar, 200 metres, which means that it’s OK for surface swimming, not for scuba diving. The crown is screw-down; there is no reference to use of the chronograph buttons underwater so I think that this should be avoided.

I haven’t been able to consult DIN 8330. One of the things that is not clear to me is whether each watch is tested, or whether a sampling procedure is used, testing a number of samples from overall production. I’ll make enquiries.

The 103-Ti IFR watch has a very wearable size at 41 mm, quite thick at 17 mm, with strap options available, leather, silicone, steel bracelet. The case is in bead-blasted titanium, with screw-fastened caseback. The rotating bezel has a one-minute ratchet, so it can be used for various methods of timing. As the watch provides just chronograph seconds and thirty chronograph minutes readings, the bezel can be used with the hour hand to provide longer readings. On the left-hand side of the case you can see the capsule for Sinn’s Ar-dehumidifying unit, with a sapphire crystal window that provides a view of the copper sulphate used to absorb any water vapour that enters the watch. If the copper sulphate turns dark blue, it is saturated and should be replaced by another capsule. The Ar-Dehumidifying programme also includes special seals to minimize moisture infiltration, and a special gas filling inside the watch.

The dial layout is attractive and very clear, with thirty chronograph minutes at 12 o’clock, continuous seconds at 8 o’clock, the Sinn logo and date window at 3 o’clock, and the TESTAF and DIN marks at 6 o’clock. The dial arrangement is one of the many possible for the Valjoux 7750 movement, from which Sinn have decided to not include the chronograph hours subdial. The chronograph seconds scale is marked in seconds only, without the quarter-second subdivisions provided on many chronographs. 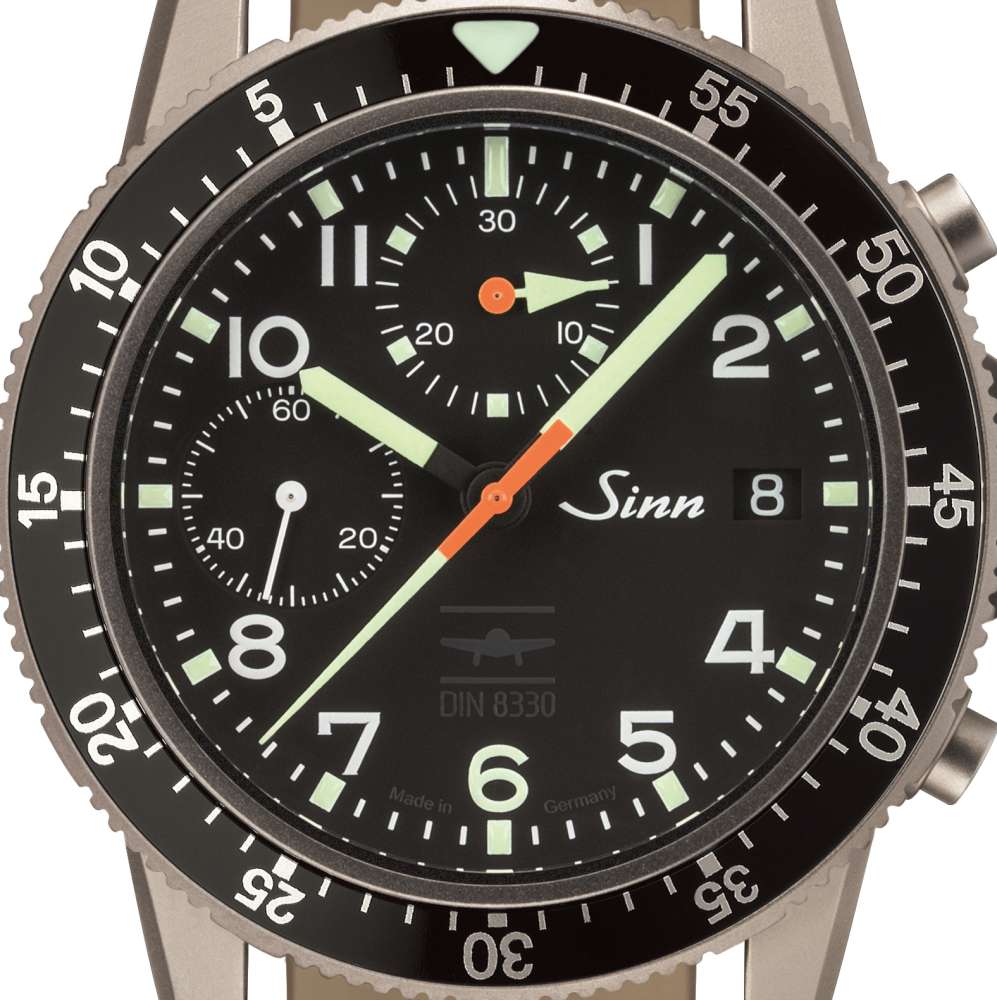 It looks effective in the dark too, with 6 as the only numeral coated with SuperLuminova, along with the hour indices, the five-minute indices on the minute counter, the hour and minute hands, and the two chronograph hands. The triangle on the rotating bezel is also luminescent. 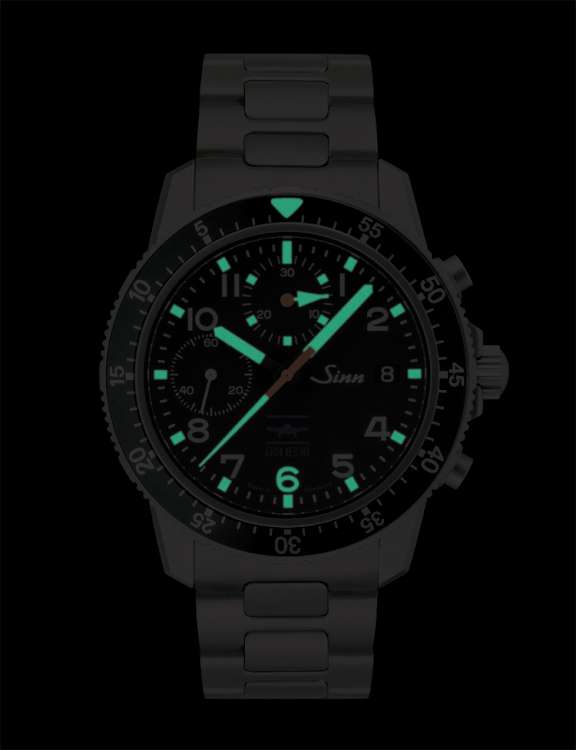 The Valjoux 7750 movement made by ETA runs at 28,800 vibrations per hour, 4 Hertz, and has a power reserve of about 44 hours. It is self-winding, powered by the oscillating weight which is personalized with the Sinn logo. Adjustments are made from the crown, with three positions: after unscrewing the crown, position 1 is used for winding should this be necessary, position 2 for quick-set date, and position 3 for time-setting, with stop-second function. 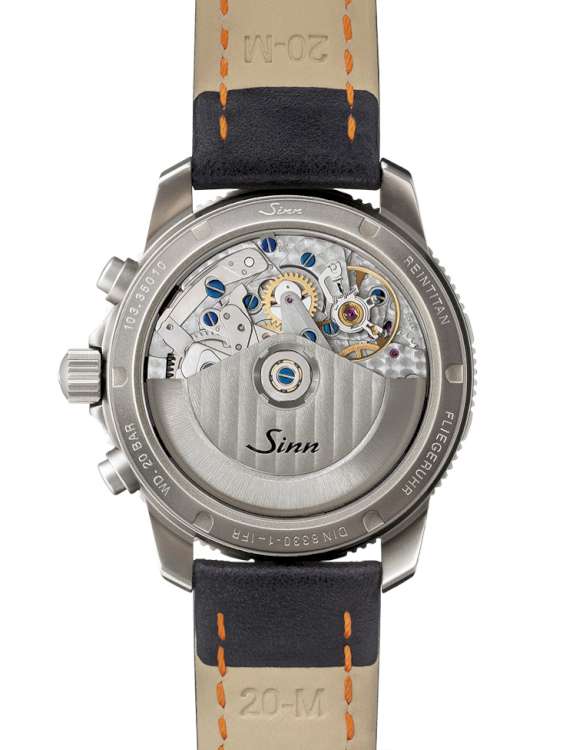 In conclusion, the Sinn 103-Ti IFR is an attractive pilot’s chronograph, with toughness certified by the new DIN 8330 protocol, an exceptionally clear dial, and user comfort enhanced by the relatively light weight (67 grams) offered by the titanium case material.