Vincent Calabrese, born in Naples, has been a watchmaker for most of his life. His career includes many inventions, collaborations with brands such as Corum and Blancpain, the foundation of his Academy, and a new watchmaking project with several interesting and accessible timepieces. In this short interview, VIncent talks about the origins of the Golden Bridge, the importance of customers’ initials, his sometimes problematic relations with major brands, and his approach to life, with his anti-militaristic, pro-diversity approach, that has always determined the direction of his work. He doesn’t mince words, and he provides a revealing insight on the difference between the tourbillon and the carrousel. I conducted the interview in Italian, Vincent’s native language (he also speaks French). 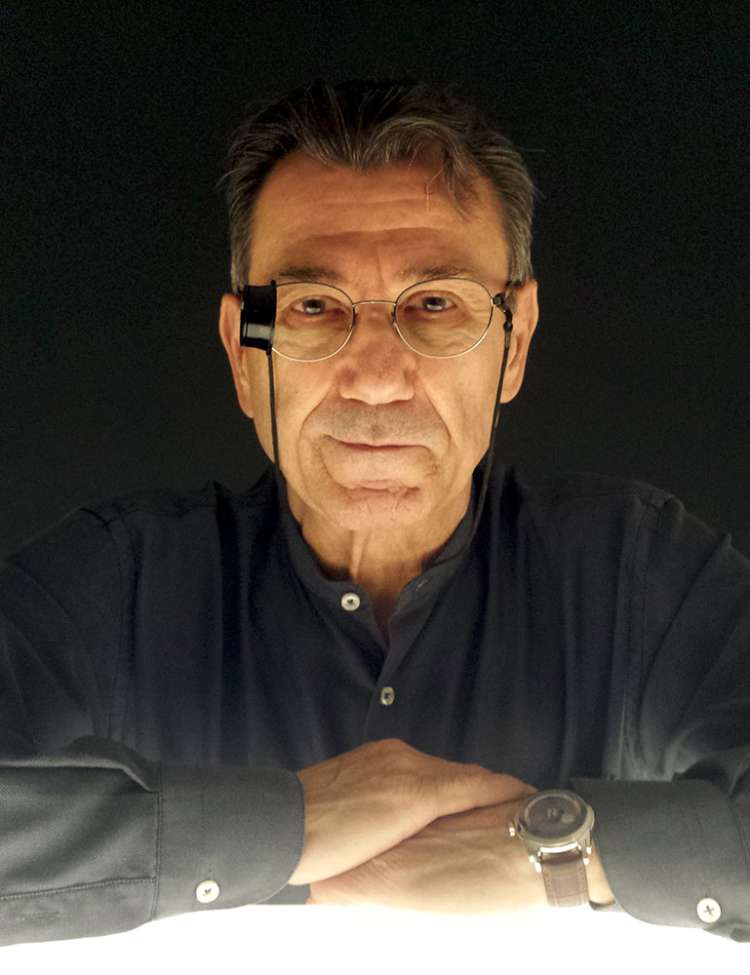 Ambrose Lancaster: First question. Do you still have an Italian passport?

Vincent Calabrese: I only have an Italian passport!

A.L.: How long have you been away from Naples?

V.C.: I left Naples when I was almost 18. It was two months before my 18th birthday, and then I would have had to enrol for military service. That’s why I left Italy.

A.L.: How did you have the idea for the Golden Bridge movement?

V.C.: At that time I was working in a luxury skiing resort, with a lot of important and very rich clients. They all wanted personalized watches and there was no company in the world capable of meeting the demand. Whether Patek Philippe, Audemars Piguet or other brands, the personalization was simply engraving the customer’s name onto the caseback, or making a special dial. I had the idea of making something genuinely personalized, not just working on something that already existed, just modifying something specially for the client in terms of decorative aspects. My idea was that something of the customer could give rise to the very structure of the watch, in its creation by the watchmaker. So the idea was to build the movement according to the customer’s initials. I had the idea and I thought, let’s start from a line, which could be straight or curved. That’s where I started, from the simplest shape, a straight line. That’s how I created the Golden Bridge, which I later sold to Corum, and it’s that movement that gave rise to everything I did later, with straight and curved lines. 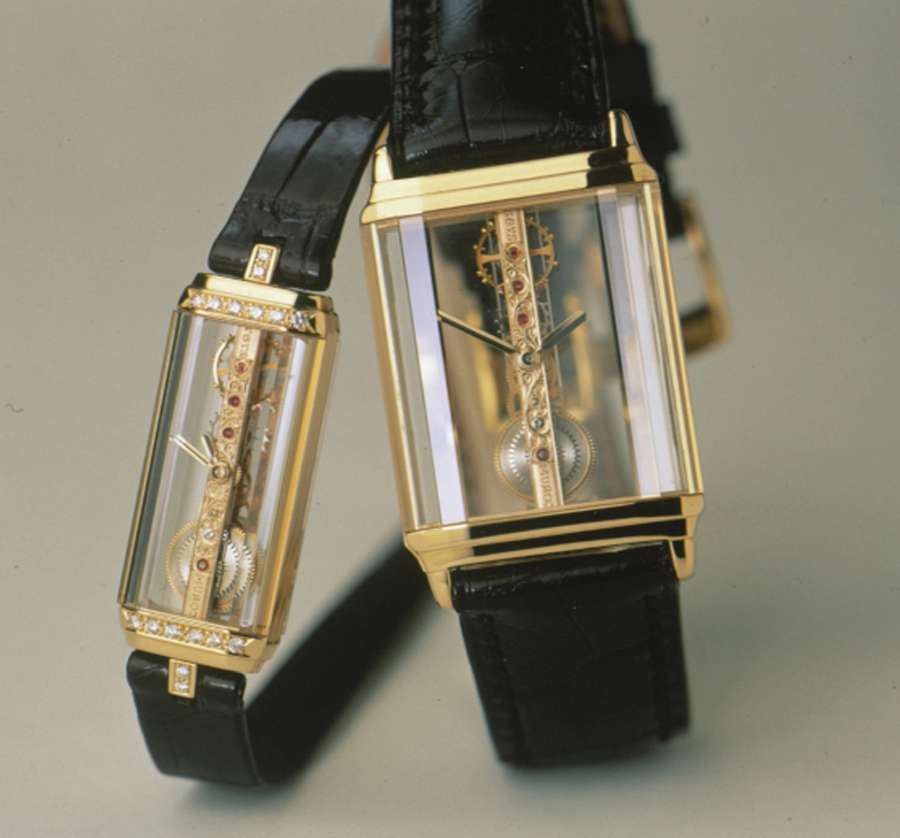 A.L.: Considering everything that you have invented, with your work on the carrousel, the tourbillon, watches for Blancpain and Corum, the Golden Bridge, are you satisfied with the rewards that you have obtained, both in terms of moral and financial recognition?

V.C.: In a normal situation the answer would be no, because many people in my position wouldn’t be satisfied. But in actual fact, the things that I have done weren’t done for them, I did them for myself. Returning to your first question, after 56 years spent in Switzerland with an Italian passport, I can say that just the fact of having an Italian passport made things very difficult for me in Switzerland, because a person like myself, an Italian with an Italian passport, succeeded in making all sorts of things that they never succeeded in doing. My Italian nationality created more enmities and bitterness than rewards. But in the end, my project received some recognition, principally amongst people who love watches and professional watchmakers themselves, while companies and a lot of media are embarrassed by my creativity.

A.L.: In 1985 you were a co-founder of the Academy, AHCI, Académie Horlogère des Createurs Indépendants,. Why did you set up this institution, and how would you describe its function?

V.C.: The major problem was that after I created the Golden Bridge and sold it to Corum, in the contract it said that my name had to be mentioned in the company’s communications regarding the movement. After about a year and a half, after the initial success of that watch, they phoned me and told me that there was a problem, because my Italian name was too long and too difficult to pronounce, and so they asked me whether I would accept my name no longer appearing in their communications. This unwillingness to give the appropriate recognition to the craftsman who had invented the movement made me rather angry, and I thought that perhaps I wasn’t the only person to be in that situation, and that there were certainly other watchmakers like myself in other parts of the world who were suffering in the same way that I was, for the lack of the recognition that we deserved. That was what inspired me to found the Academy – AHCI, Académie Horlogère des Createurs Indépendants. There were people of international repute who needed someone who spoke the languages that I couldn’t speak. So I turned to with fellow watchmaker Svend Anderson who spoke German and English, and I spoke French and Italian, and we created the Academy in 1985. The objective was to put watchmakers into the spotlight. This is still the case today. 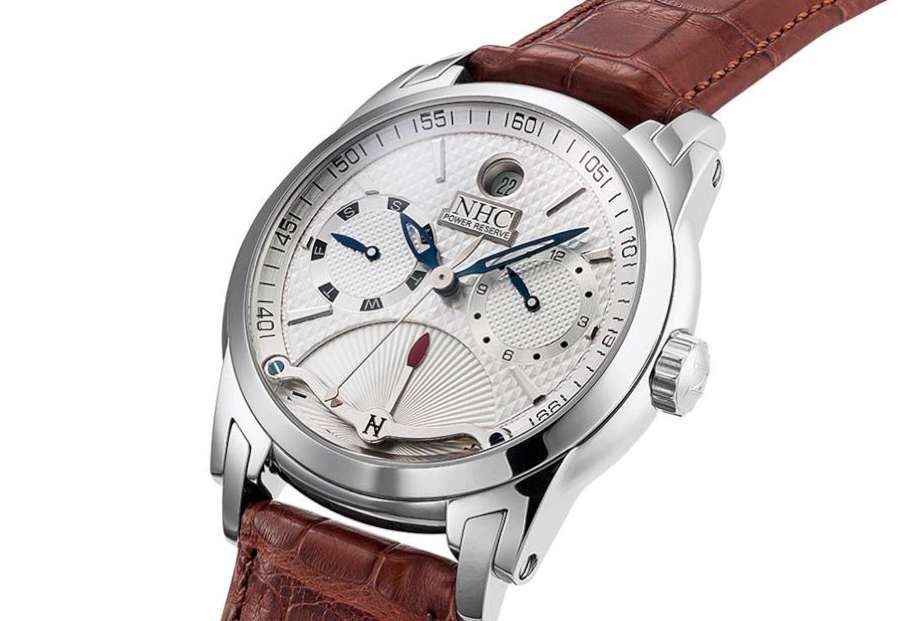 A.L.: Let’s change the subject and move on to something more technical. What is the main difference between the carrousel and the tourbillon?

V.C.: The carrousel was invented by the watchmaker Bonniksen, a Dane who was working in England, but he came up against Switzerland’s fascism, in other words the French Swiss who at all costs wanted Breguet and his tourbillon to be considered as superior to Bonniksen’s carrousel, and so for almost two centuries the carrousel was almost entirely forgotten. When I made my first tourbillon, I didn’t make it with a large central balance, but I made it eccentric. Other watchmaking ateliers said that it wasn’t a tourbillon but actually a carrousel. I was criticized for many years, and as I had sold the invention to Blancpain, they criticized Blancpain in the same way. So when I was working with Blancpain thirty years later, we decided to take our revenge and to show the world exactly what the carrousel was. We created a carrousel that rotates once per minute with a central balance, and I was able to show, with calculations and videos, that the carrousel is far better than the tourbillon because mechanically they are completely different. The tourbillon’s characteristic rotation is obtained by means of a fixed wheel and a simple planetary rotation, while there is nothing fixed in the carrousel: it has a differential, and so its actual movement is very difficult to calculate. I was able to show that the carrousel is far more advanced from the mechanical point of view. We demonstrated an enormous defect of the tourbillon, which has a fixed wheel and a cage that revolves around it: in the vertical position, when the cage is at the bottom of its circuit it tends to fall away from the gear teeth, and when it is at the top it tends to fall into them, so to speak. The result is a diversity in energy transmission during the tourbillon’s rotation. As the carrousel doesn’t have a fixed gear, this phenomenon does not occur. 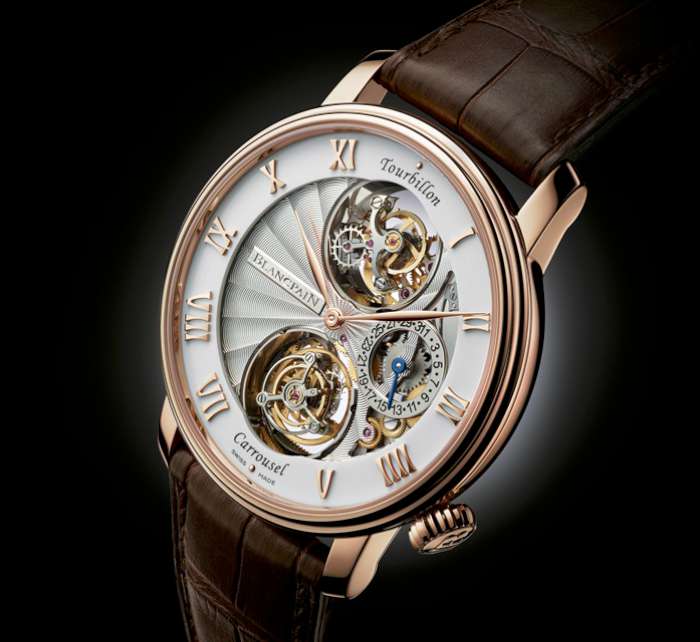 The Tourbillon Carrousel by Blancpain, which combines both complications in a single movement. Photo courtesy of Blancpain

A.L.: Today you have rebooted your watchmaking production, with a new website and intense activity on social media. Have you been working on this project, NHC Nouvelle Horlogerie Calabrese, for many years?

V.C.: No, not long. Nine years ago I sold my company to Blancpain, with the agreement that they would produce my creations and my patents, but in actual fact they have done nothing at all. At that time I faced the situation of having to accept that my work would die with me. Alternatively I could try to do something that would enable my work to continue after me. In order to make my return I am trying to put my creations into production, creating an infrastructure so that it’s no longer just me working on my own. I hope to gradually find some partners so that my work can be continued.

A.L.: In your watch Personnelle Ypsilon, the Y to which the name refers has some symbolic significance for you, but are there also practical reasons for the shape?

V.C.: The letter Y can be interpreted according to its Greek definition, but at the start, Y was just a customer’s initial. When I make one of my spatial watches, for me the construction is more important than the symbols. In that particular case, I had a movement that I had already built, and I wanted to make a different case. I also wanted to add to it with engravings. This watch is unusual in that it is in white gold, a metal that I have used for only a few watches because I generally used yellow gold. And its case is special, there are only four cases of this type. It was engraved superbly by a colleague, a true star of engraving. So in this watch there are two contributions, my own, and the engraver. Usually in my spatial watches, there is just a single contribution, myself as the watchmaker-artisan who worked on the piece. 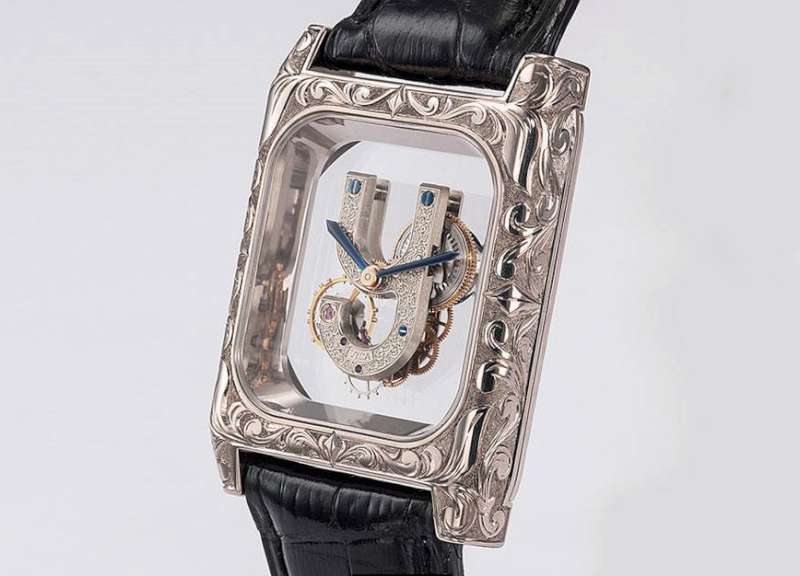 A.L.: Avvent’Ora is an unusual piece because it is available either with a quartz or an automatic movement…

V.C.: For me it is important to remember the value of quartz. It is often forgotten that a quartz movement is far more accurate than an automatic watch. And I wanted to show my watchmaking colleagues that quartz has the same power, in functional terms, as a mechanical movement, and so that it can be used with the same mechanism. Not many watchmakers have managed to do this, and in fact as far as I know, I am the only one to have succeeded. Then there is also a philosophical aspect, with the central hands for hours and minutes as in a normal watch, and in addition the trapezoidal window that jumps every hour to indicate a symbol from a different culture. I wanted to demonstrate my own life approach of openness to others, to the whole world community, the fact that we are all living on the earth in the same conditions. 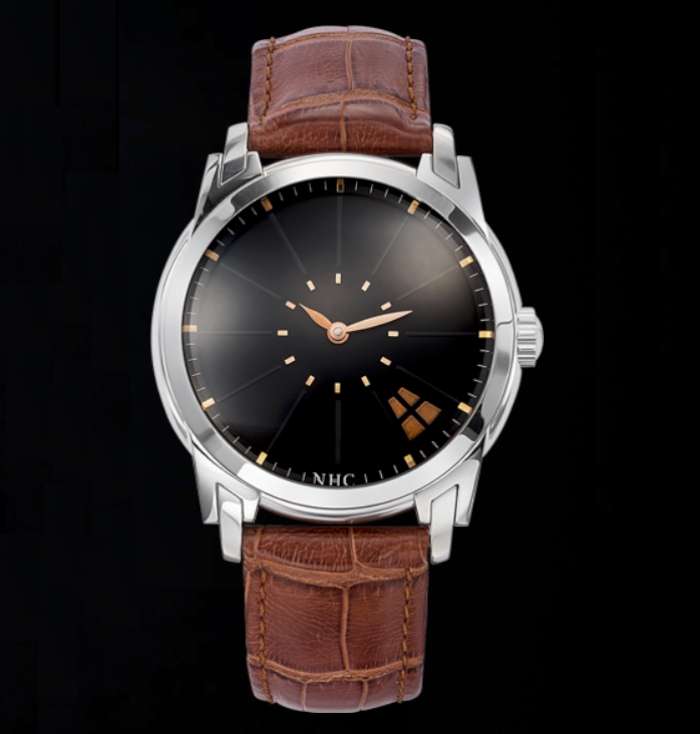 A.L.: There are some other watches in which you have modified an ETA movement, such as the 2892, personalizing the movement in order to add the power reserve indicator.

V.C.: That’s right, in practical terms I have worked on two levels, the spatial watches in which I built the movement – and in this sort of artisanal watchmaking the price is at a higher level – and on something more accessible for people with more moderate financial resources. I wanted to demonstrate something different with respect to spatial watches, for which it is obvious that they are unlike other timepieces, there is no-one else making watches like these. In fact I wanted to create an unusual watch while still using the conditions adopted by many others, in other words a dial that hides the watchmaker’s movement, even accepting the case which is like a coffin for the watch. So starting from there, from something ordinary, my objective was to do something extraordinary. I always used the same movement, the ETA 2892, on which I have developed dozens of different mechanisms. The basic concept was to show that in any case, I could still do something different. For me it is a technical demonstration of my philosophical approach. 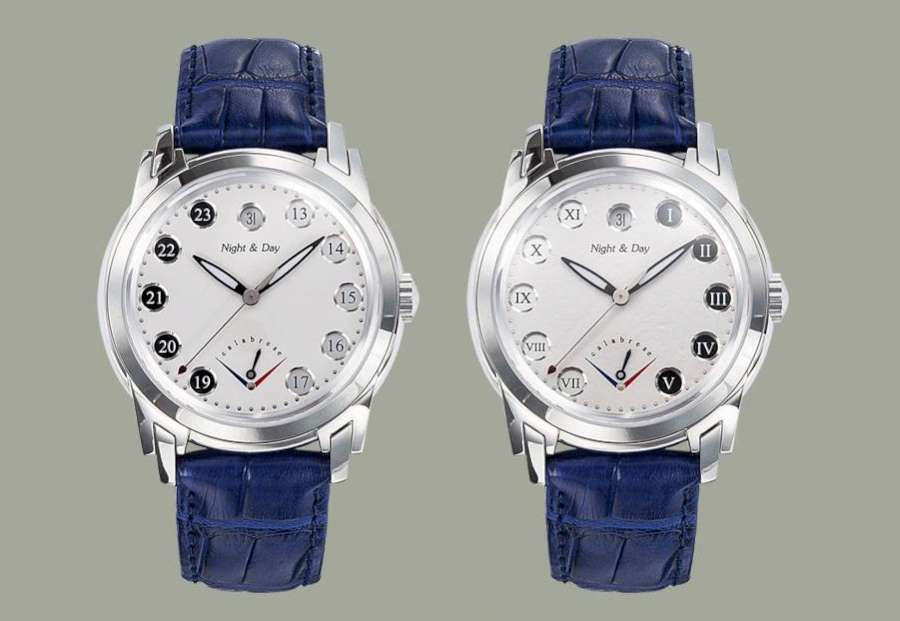 A.L.: Which is the most accessible watch in the range that you are now making?

V.C.: The most accessible pieces are the quartz watches that start from 2,500-2,800 Swiss francs. I think that this is a more than fair price, because they are nonetheless to an extent artisanal watches, unusual timepieces offered at virtually normal prices. 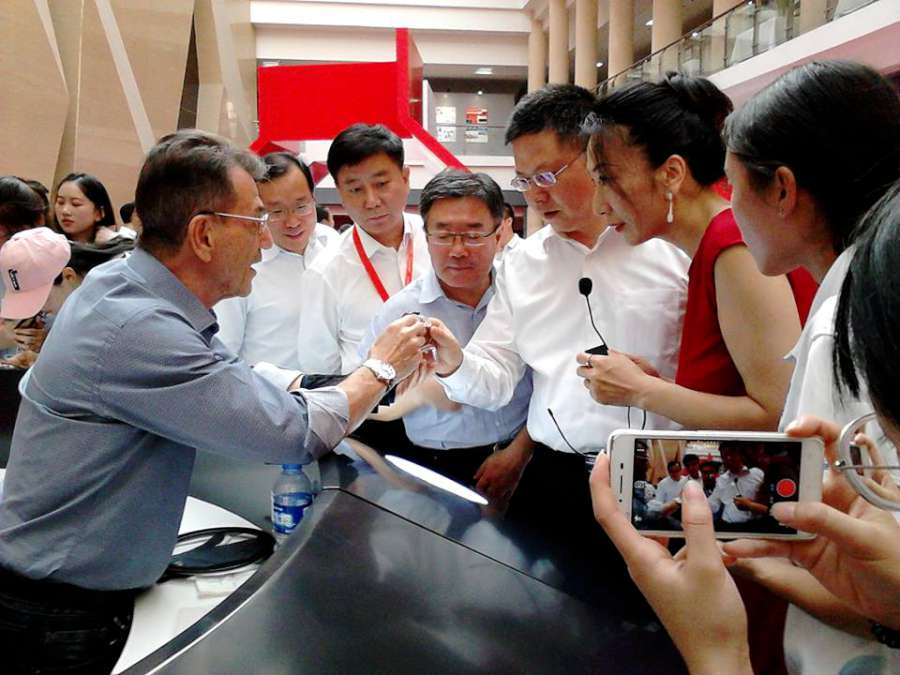 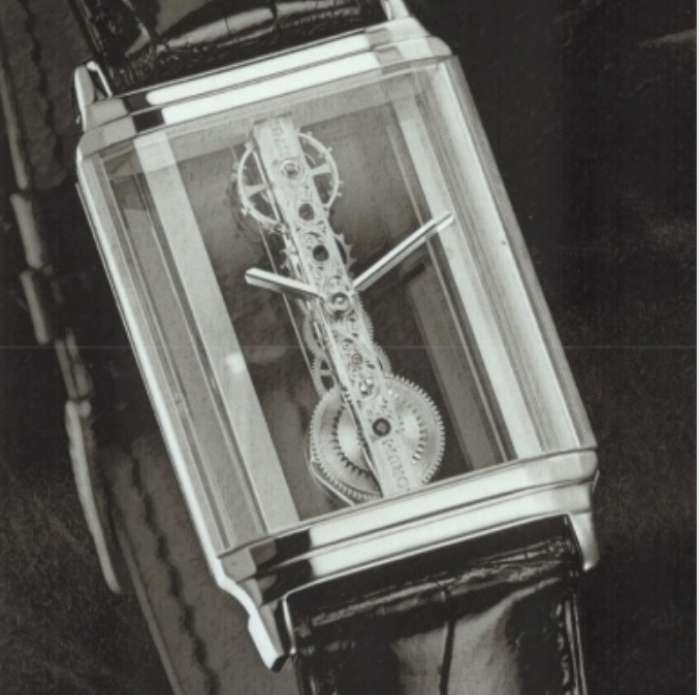 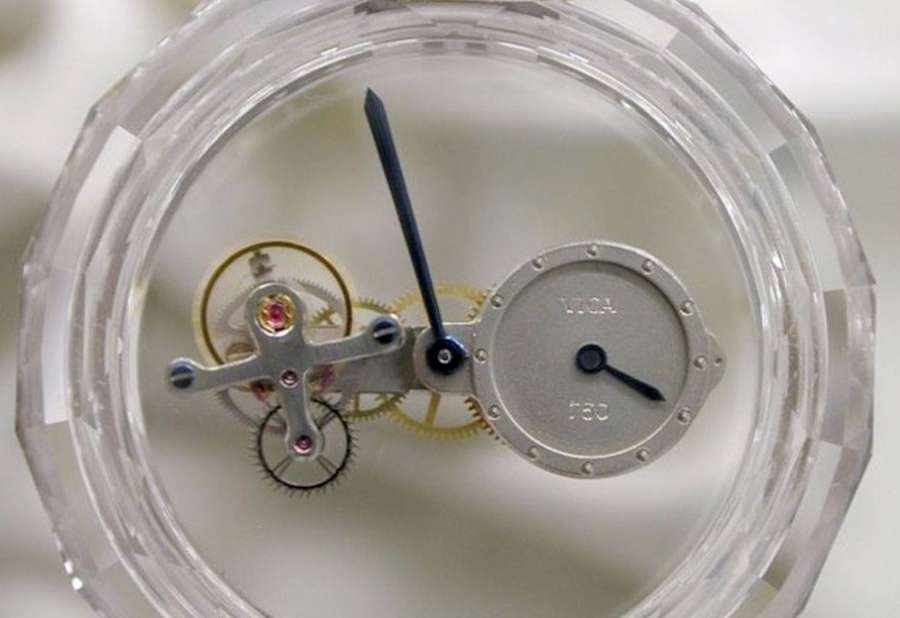 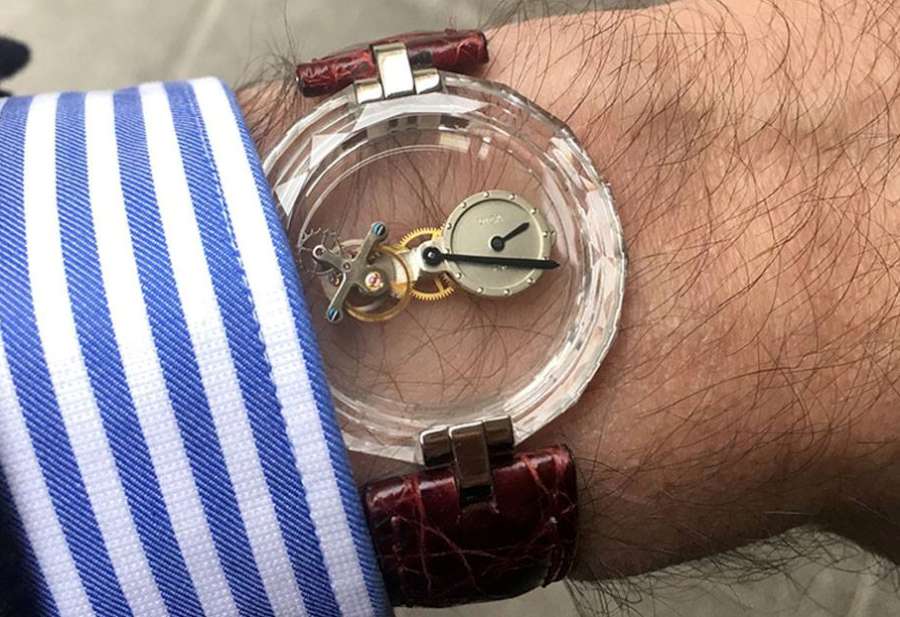 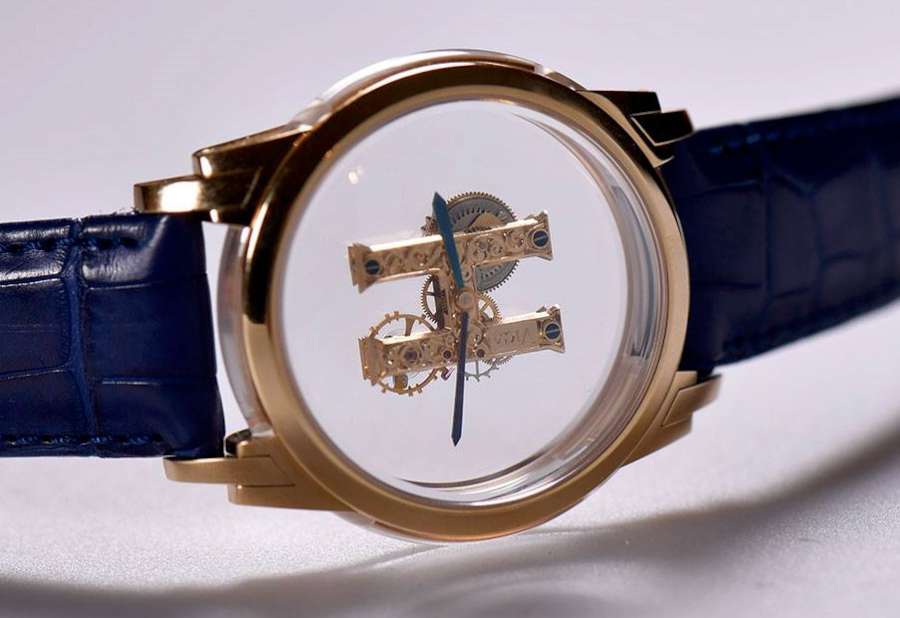 A Spatial watch by Vincent Calabrese, based on the initial H 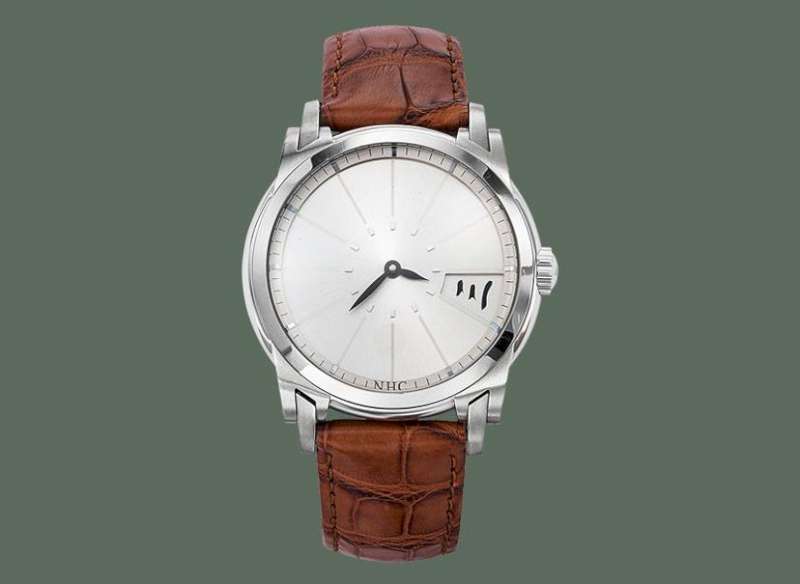 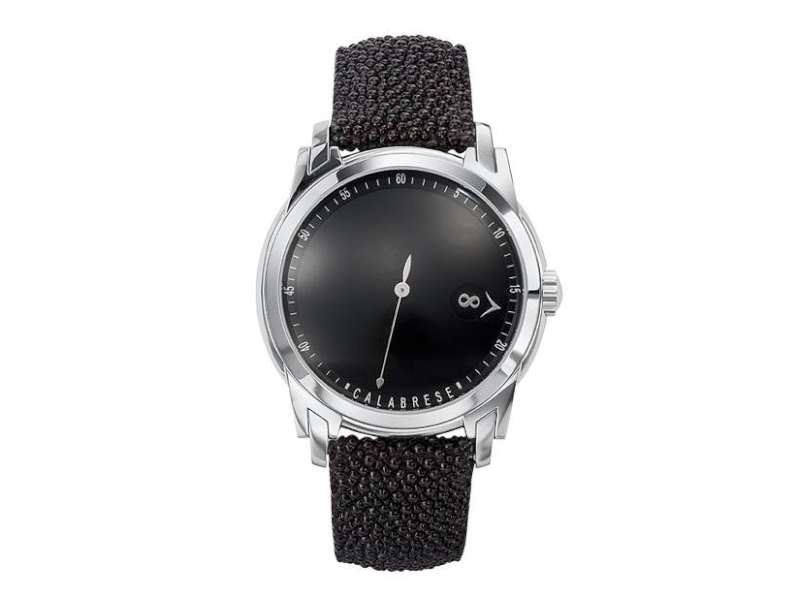