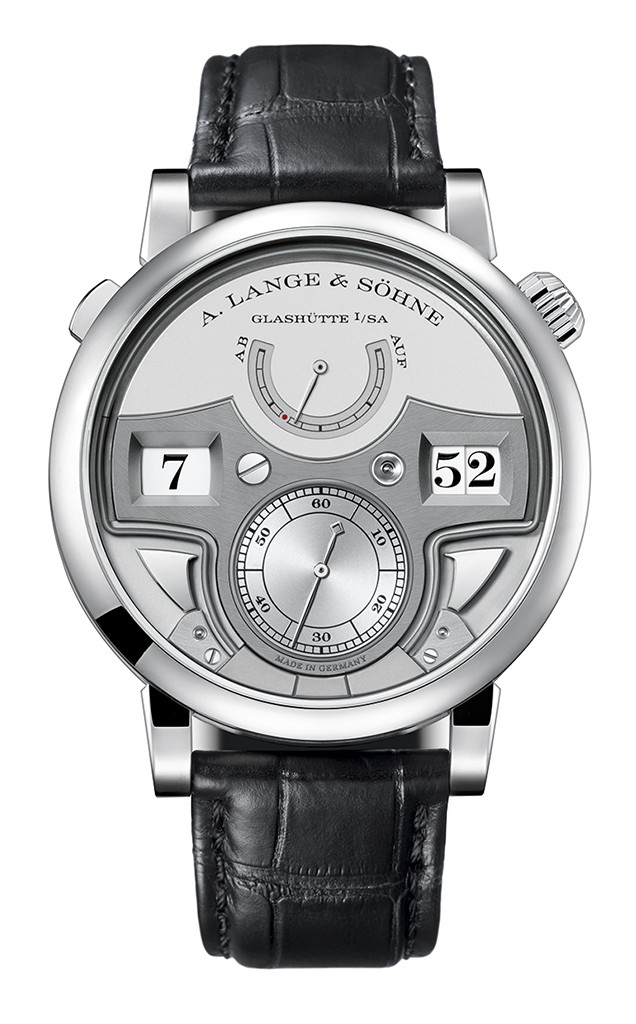 A. Lange & Söhne always have a giant model of the most important piece in their collection at the entrance to their stand at SIHH, and this time it was the Zeitwerk Minute Repeater. A beautiful piece in every way, with just one small but significant defect (and I don’t mean the price). But we’ll get to that observation at the end!

The Zeitwerk Minute Repeater (reference 147.025F) is the most important piece, in this anniversary year for the brand (200th anniversary of the birth of founder F.A. Lange). The other watches presented are all new editions of existing pieces, with fairly minor changes in appearance but in some cases totally new movements, as in the Lange 1. I have described the three Saxonia pieces here; then there are the lovely Datograph Up/Down and the Datograph Perpetual. The manually-wound Saxonia retails at €13,900, the Datograph Perpetual at €119,000, while the Zeitwerk Minute Repeater is in a different league at €440,000.

The price reflects the five years’ development of the watch. Its appearance is similar to the Zeitwerk Striking Time, but with the addition of two gongs and two hammers visible on the front. The most exceptional factor of the new piece is that it is doesn’t sound the hours, quarters and minutes (as is the case for most minute repeaters), but rather hours, tens of minutes and minutes. So if the time is 3.41, it chimes three times on the lower gong, four times on both gongs, and once on the higher gong. It’s more instinctive than the other system in which you have to mentally add the number of minutes to either 15 or 30 or 45. It is also perfect for the digital time display and corresponds to the brand’s ambition for the watch, to chime what you see on the dial. 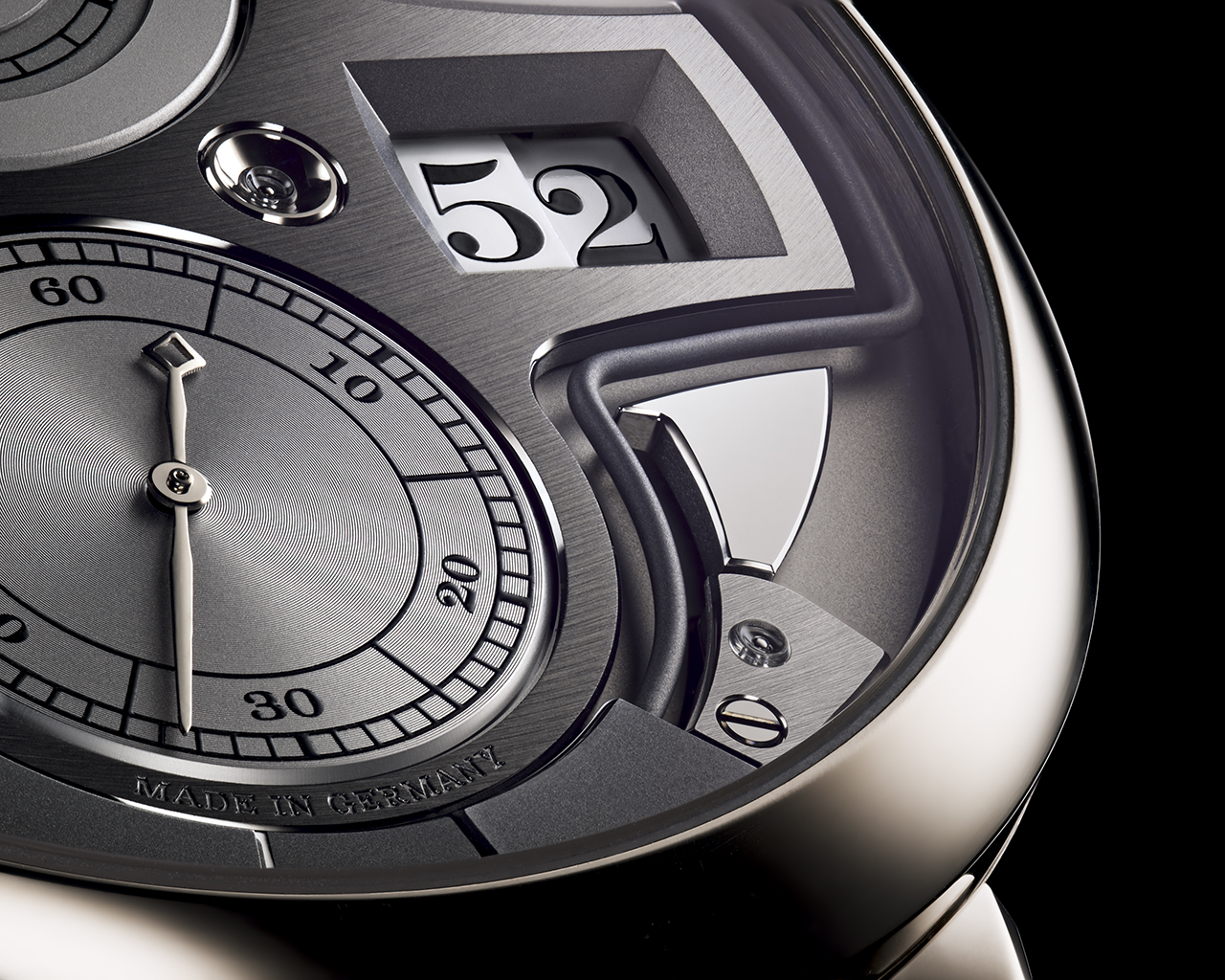 The latter concept produced an interesting refinement. What happens if the watch starts chiming when the second hand is say at about 57 seconds? If the minute digit changed when the second hand reached 0, the watch would end up chiming one less minute than the time displayed. And so A. Lange & Söhne have built in an intelligent system so that in this situation, the minute digit only changes after the watch has finished chiming.

Another interesting feature is the method used to activate the chiming, not the usual slider, but just a pusher at 10 o’clock. This is definitely user-friendly. The slider is often used because it doesn’t just activate the chimes, but also provides the energy to drive them. In the A. Lange & Söhne piece, the energy comes from the barrel, a single barrel that also drives the movement itself. So every time you activate the striker, you use a significant amount of the power reserve. From maximum power reserve (36 hours) you can activate the chimes 12 times, after which the power reserve indicator at the top of the dial will have reached the red dot. This marks the point at which the watch automatically refuses to chime when you push the button. It gives you time to manually rewind using the crown (positioned at about 2 o’clock, symmetrically opposite the repeater pusher)..

There is a lot more technical stuff inside, such as a constant-force mechanism. In total there are 6 patents on the watch. They have packed all this, and the 771 components (about 300 more than a nomal minute repeater) into a platinum case, 44.2 mm in diameter, 14.1 mm thick, that is no larger than the previous Zeitwerk Striking Time. It is water-resistant to 300 metres. If you want one, you’ll have to be patient, because the first pieces will only be available in November 2015. It’s not a limited edition.

The problem? During the presentation, there were lots of people taking photos with their mobile phones, but the staff said: no videos. And it was easy to see (hear) why. Even standing just a couple of metres away, I just couldn’t hear it. It is a very personal repeater in that the chimes are for the wearer only. It’s not going to disturb anyone during a classical music concert. And so it is a great contrast to the Audemars Piguet Royal Oak Acoustic RD#1, which could be heard loud and clear at a distance of say 10 metres. 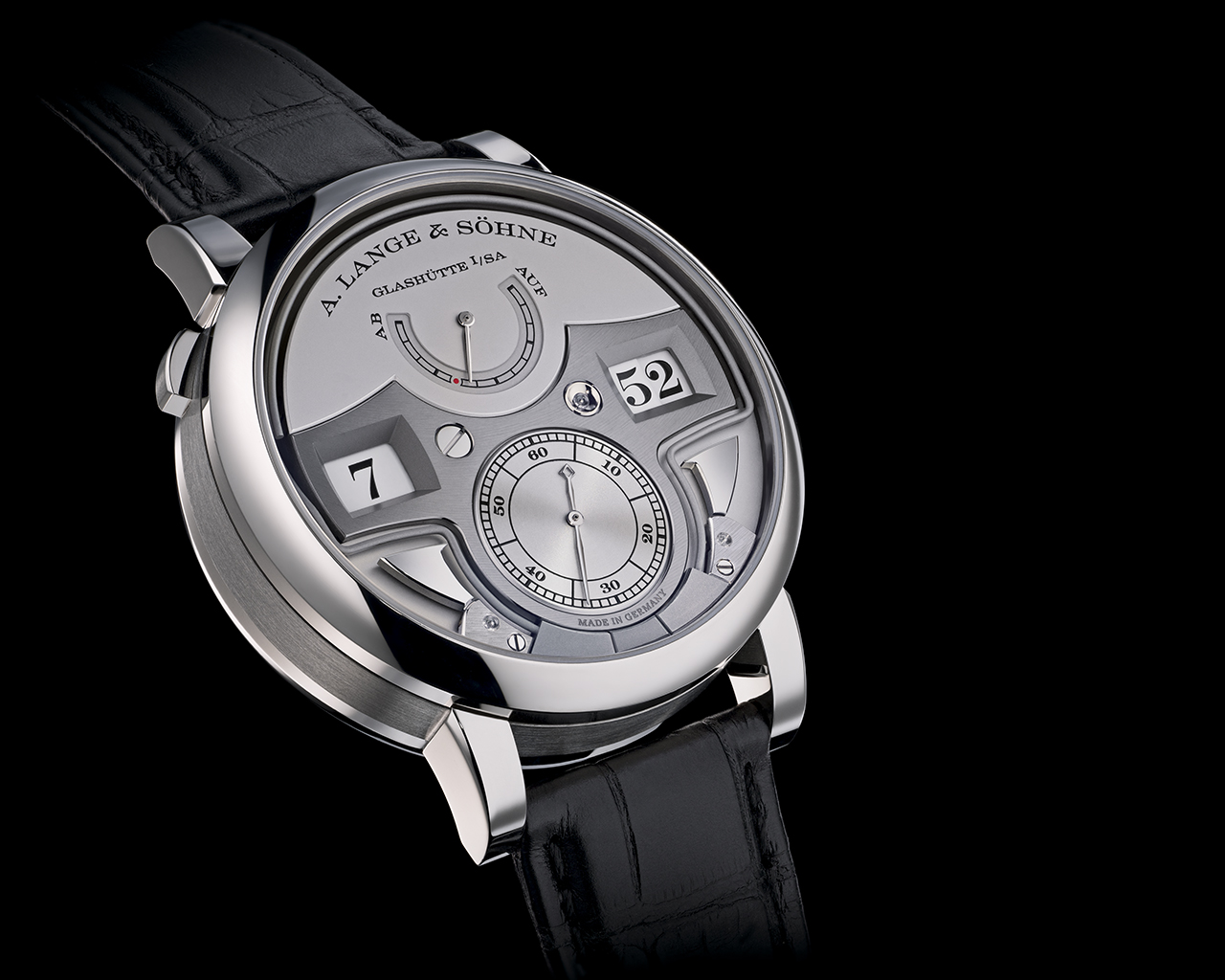 Below, detall of the power reserve indicator: 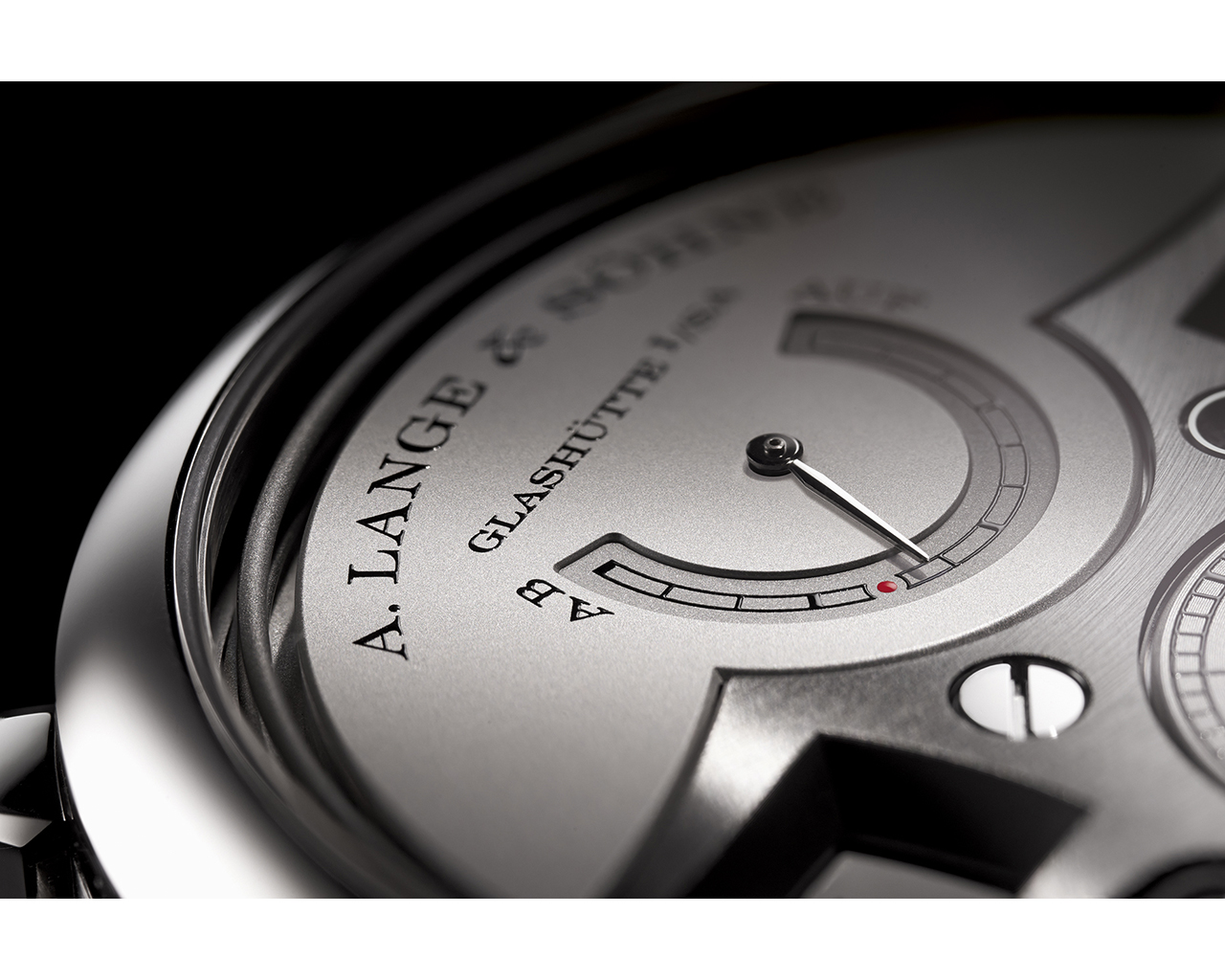 Below, the L043.5 manufacture calibre: 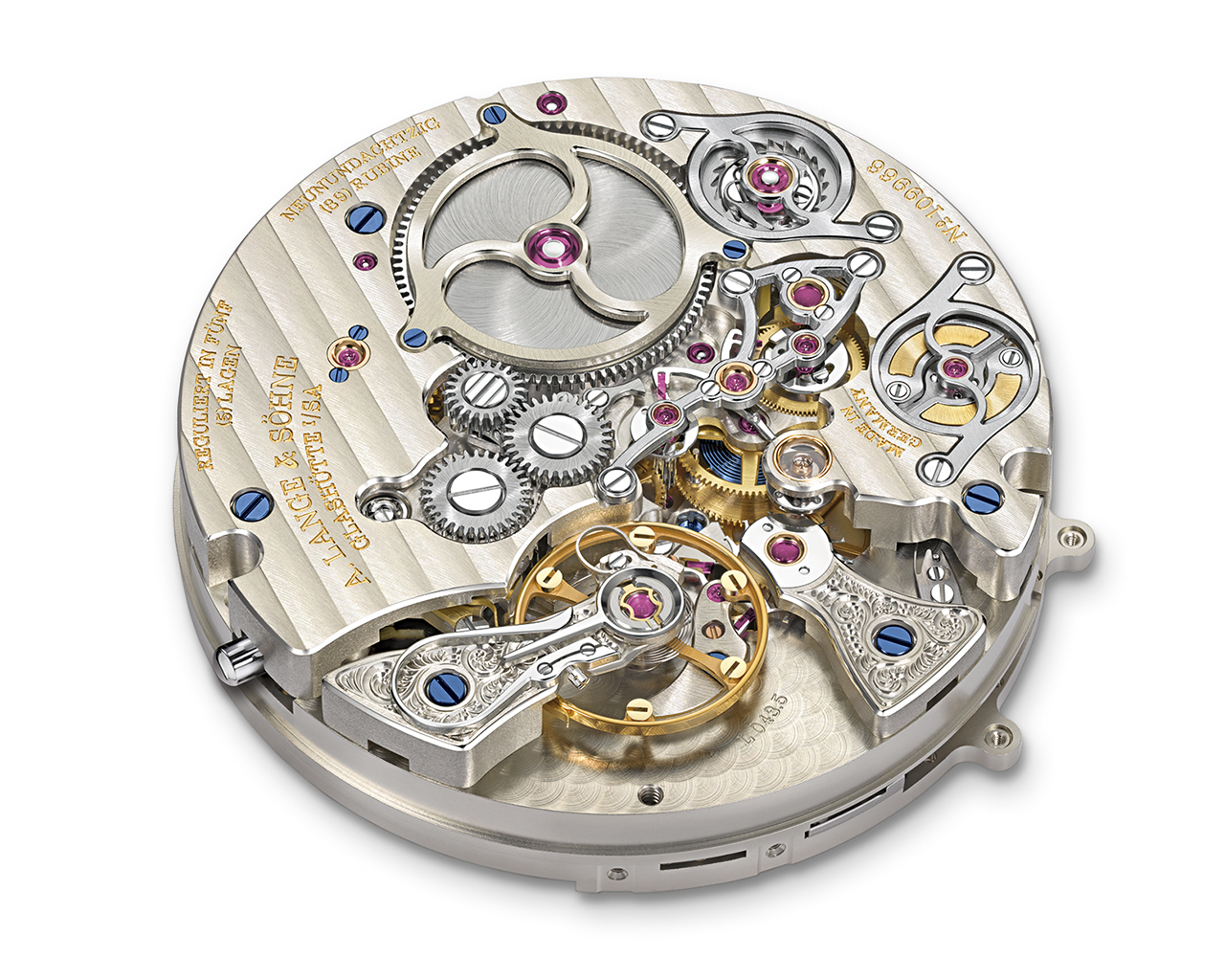