PF361 movement in rose gold, designed and made by Parmigiani Fleurier

Balance runs at 36,000 vibrations per hour, 5 Hertz, so that the chronograph can display times to an accuracy of a tenth of a second 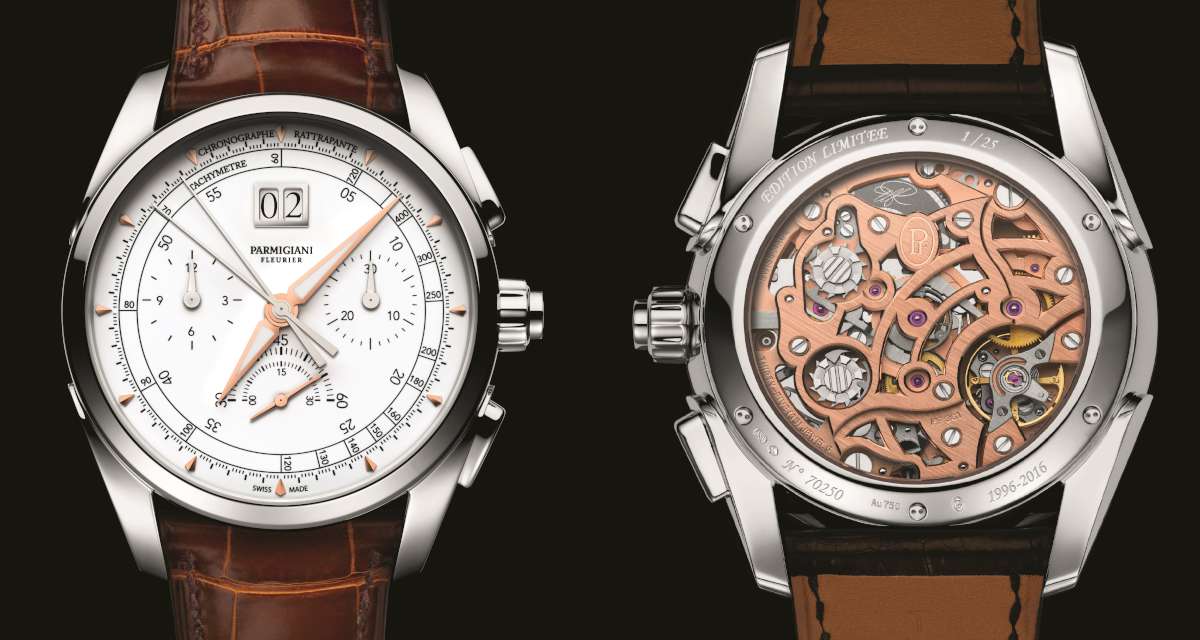 The Tonda Chronor Anniversaire by Parmigiani Fleurier celebrates the brand’s 20th anniversary, from its creation in 1996 by Michel Parmigiani with the Sandoz Family Foundation. It’s a very technical piece, with a clear and functional dial. Its utility is further enhanced by the big date. It is also exceptional in that the movement is entirely made in rose gold. Michel himself said, “Since the very start of our watchmaking adventure, the idea of creating an integrated chronograph has always been close to my heart… an integrated chronograph is necessarily the work of an experienced manufacture. The Tonda Chronor Anniversaire is a reflection of 20 years of work.” The watch undoubtedly incorporates some of the knowledge that Parmigiani developed during his intense activity as restorer of antique watches.

The Tonda Chronor Anniversaire’s dial is logically arranged, with time function hands all in one colour, chronograph hands in another (the colours are opposite in the two different dial colours). The hour and minute hands have a luminescent coating, while the continuous seconds hand below the central pivot has a double scale. The dial’s technical look is enhanced by the tachymeter scale and the numerals for seconds inside the outer chapter ring. 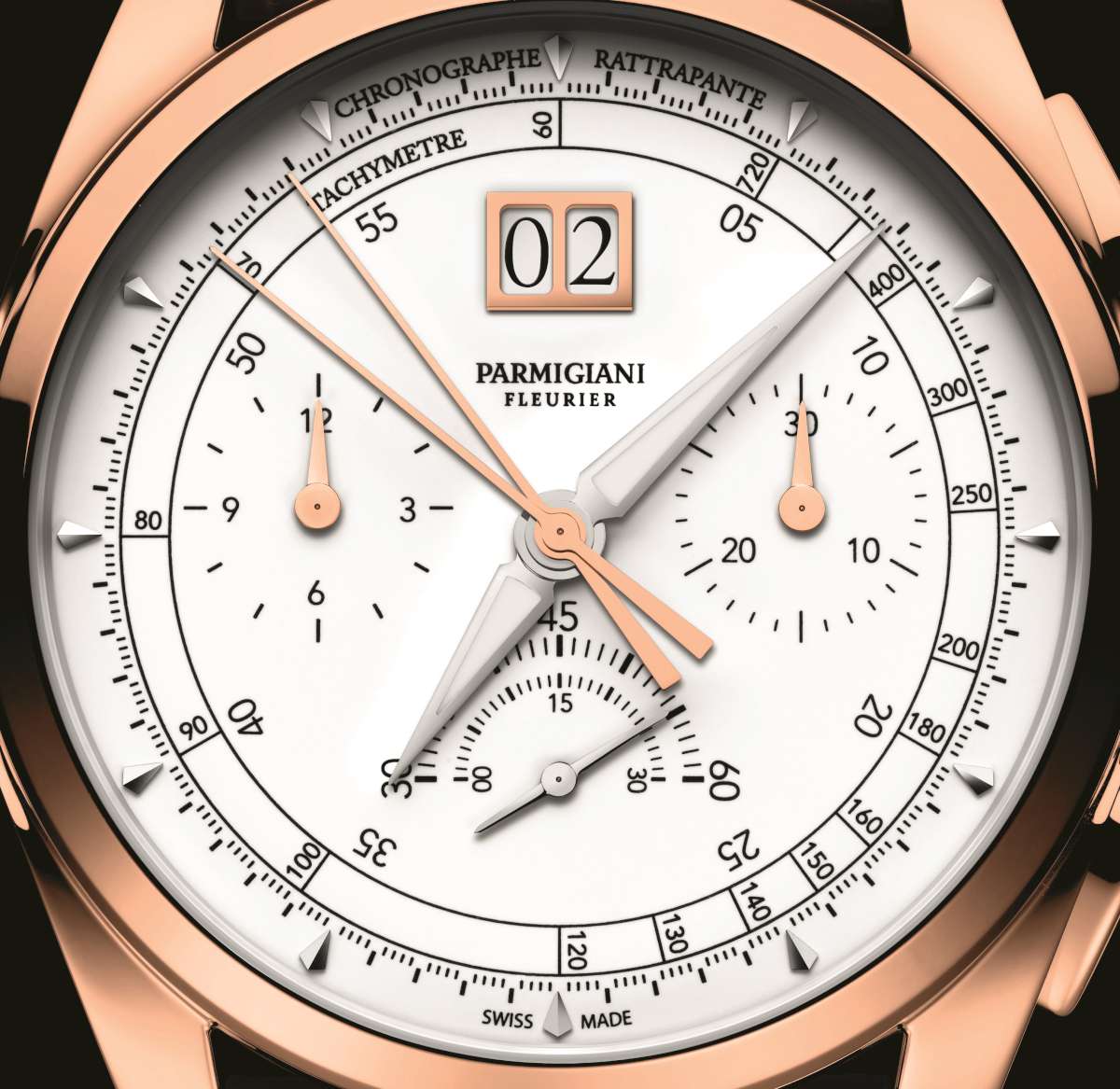 The Tonda Chronor Anniversaire is the first integrated chronograph by Parmigiani Fleurier, with the PF361 movement developed specially for the piece. The movement runs at 36,000 vibrations per hour, 5 Hertz, the most logical frequency for a chronograph because it enables tenths of seconds to be measured and displayed on a chapter ring marked in fifths of seconds. The chronograph is controlled by a column wheel, with vertical clutch, which improves accuracy with respect to the more usual horizontal clutch. The movement is 8.5 mm thick and has 317 components. The single handwound mainspring barrel provides a power reserve of 65 hours.

The big date function is also integrated into the movement, with the numerals shown in a double frame at the top of the dial. 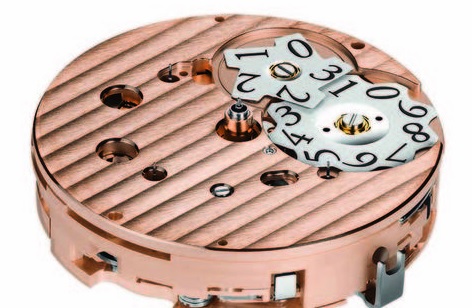 The view through the transparent display caseback is beautiful. The bridges are designed in the form of concentric circles radiating out from the balance, like circular waves rippling out fromwhere a stone is thrown into water. The two crown wheels are in prominent view, and Michel Parmigiani’s signature can be seen on the mainspring barrel at the top. Finish is excellent, with brushed surfaces contrasting with the bridges’ polished internal angles. The movement’s design includes some complex curves reminiscent of Michel Parmigiani’s hallmark lugs, generated by “golden mean” spirals that have always been an important part of his design approach. The same shape can be seen in the two chronograph pushers, and in the ardillon buckle. 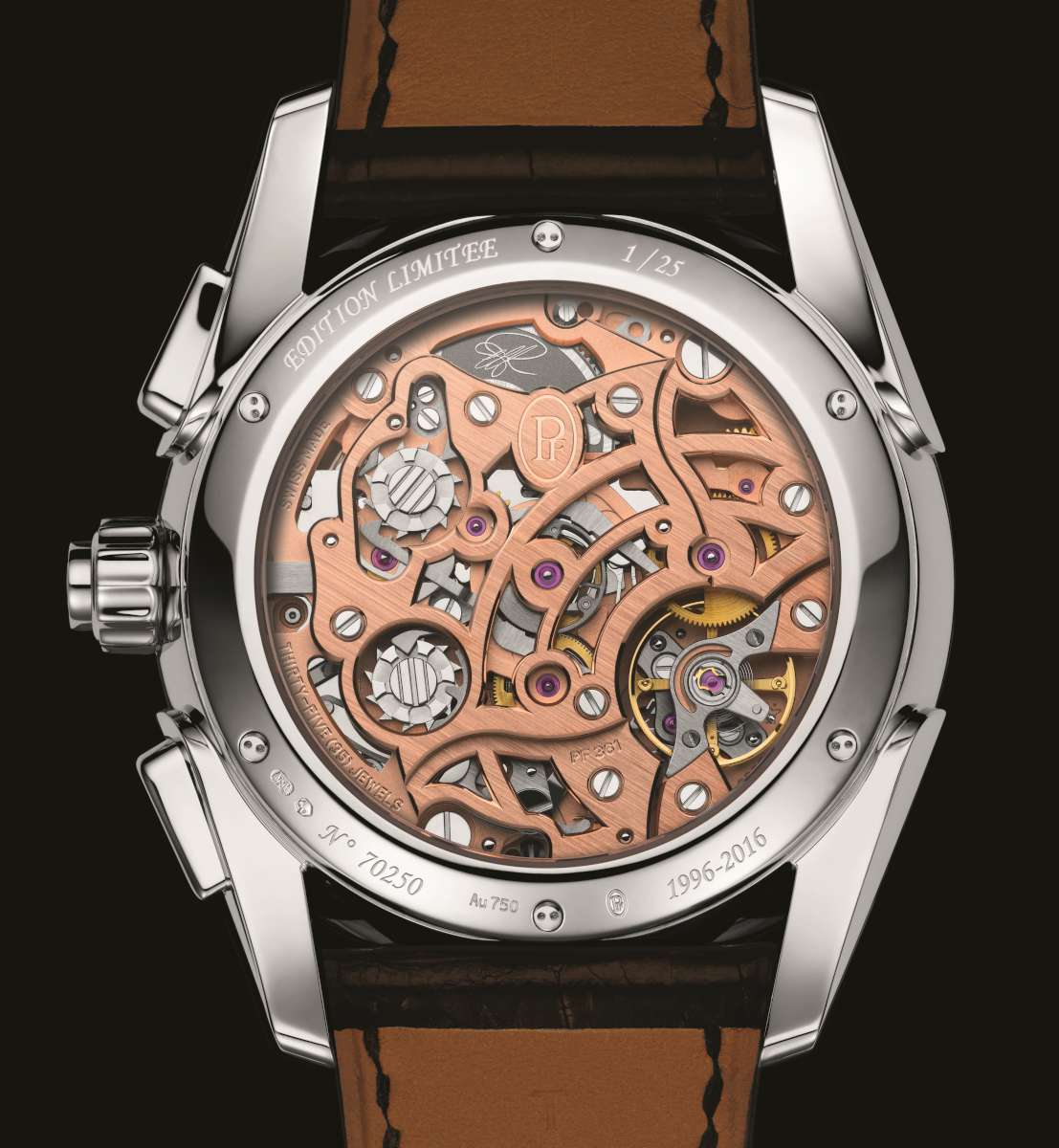 Two versions of the watch are made, with case in white or rose gold, and each version can have a white or deep blue dial. Both dials are in grand feu enamel, and the blue version is in a new colour for Parmigiani Fleurier, “Bleu Roi” or royal blue, that varies from blue to purple according to the light. The case is 42.1 mm in diameter and 14.6 mm chick, with water resistance 3 bar (30 metres). 25 pieces of each case type will be made, with individual number engraved on the caseback. The watch has an alligator strap with ardillon buckle. 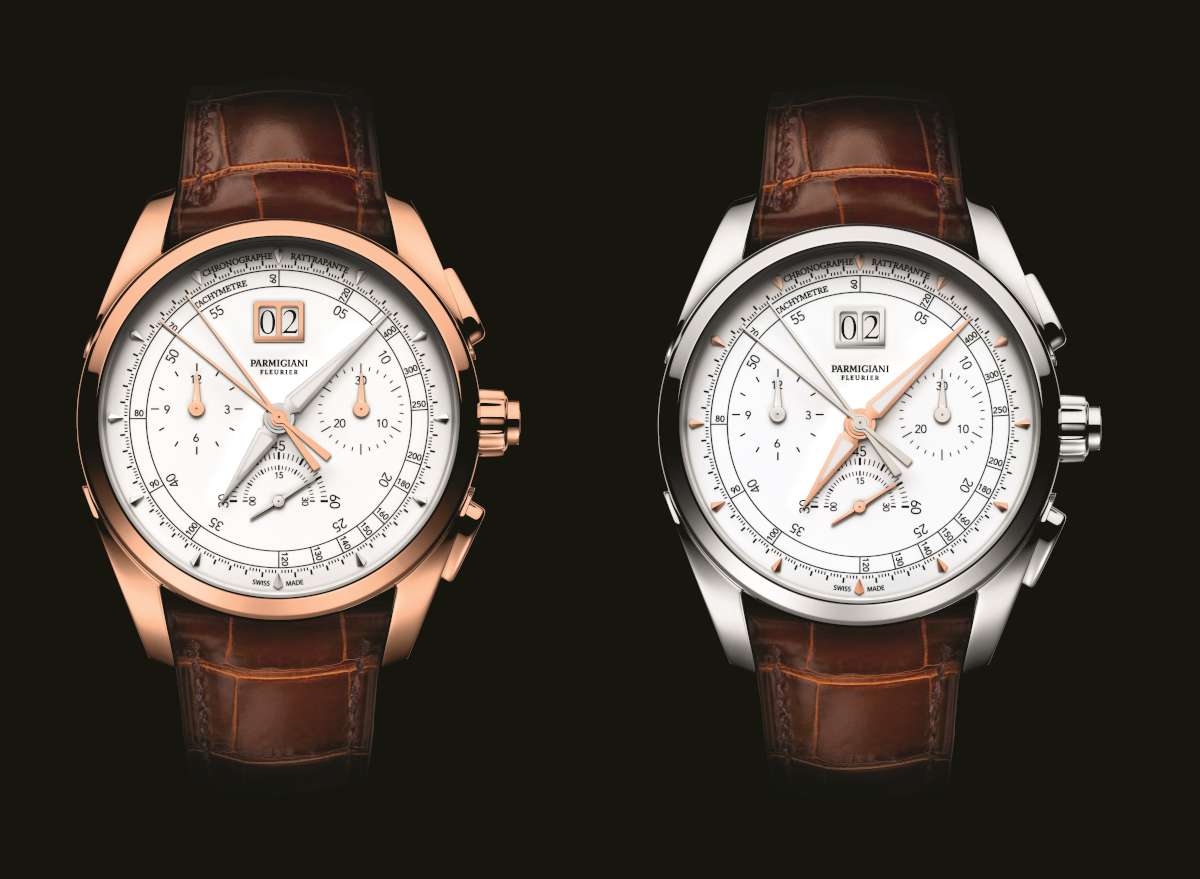 The Parmigiani Fleurier Tonda Chronor Anniversaire is a limited edition, 25 pieces in white gold, 25 in rose gold. The price for both is 135,000 Swiss francs. 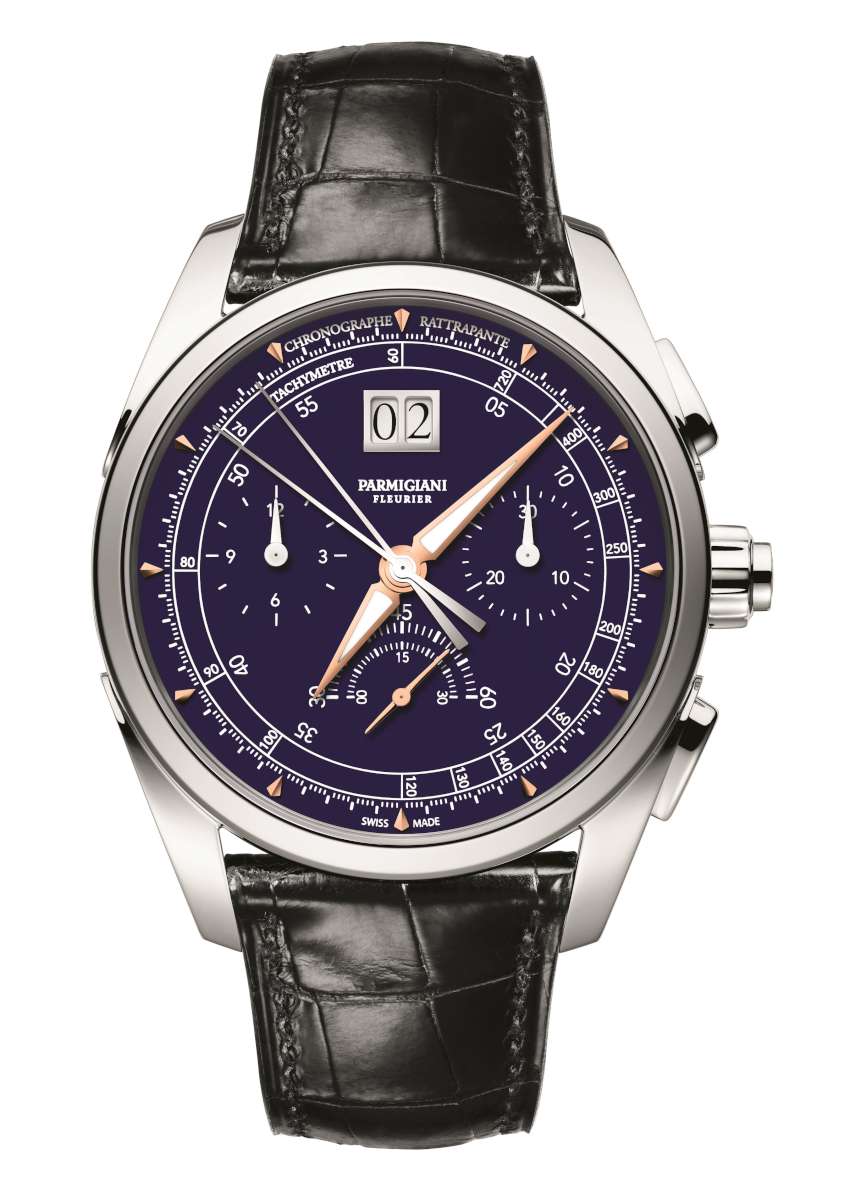