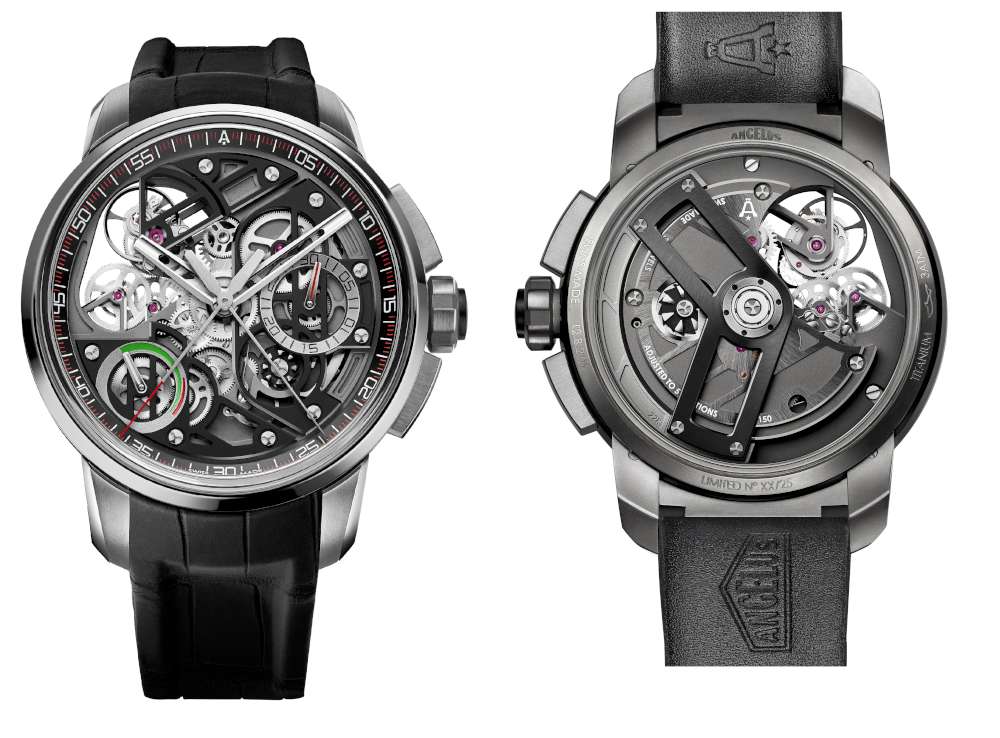 All of the watches by Angelus have a high content of originality, from the U10 launched in 2015 that marked the company’s return to business, to this year’s three models. It is above all with the U30 Tourbillon Rattrapante that Angelus and its new owners are saying “We are here.” The U30 is a show piece conceptually on a par with brands like Breguet, a piece that combines three complications, tourbillon, flyback chronogtraph, and split-seconds display, with two column wheels, automatic winding, and power reserve display.

There is no dial, just the skeletonized bridges, grey NAC-treated or black ADLC-treated to provide maximum contrast with the wheels. A total of 15 wheels can be seen from the dial side, within a bridge architecture based on straight lines and loosely resembling an A-shape placed on its side. At top left, the one-minute tourbillon runs at 28,800 vibrations per hour (4 Hertz). Underneath, the power reserve indicator is at 8 o’clock, with green and red enamel showing respectively optimum power and winding required. At four o’clock, the column wheel controlling the split seconds function is in view, just below the chronograph minutes counter at 3 o’clock. 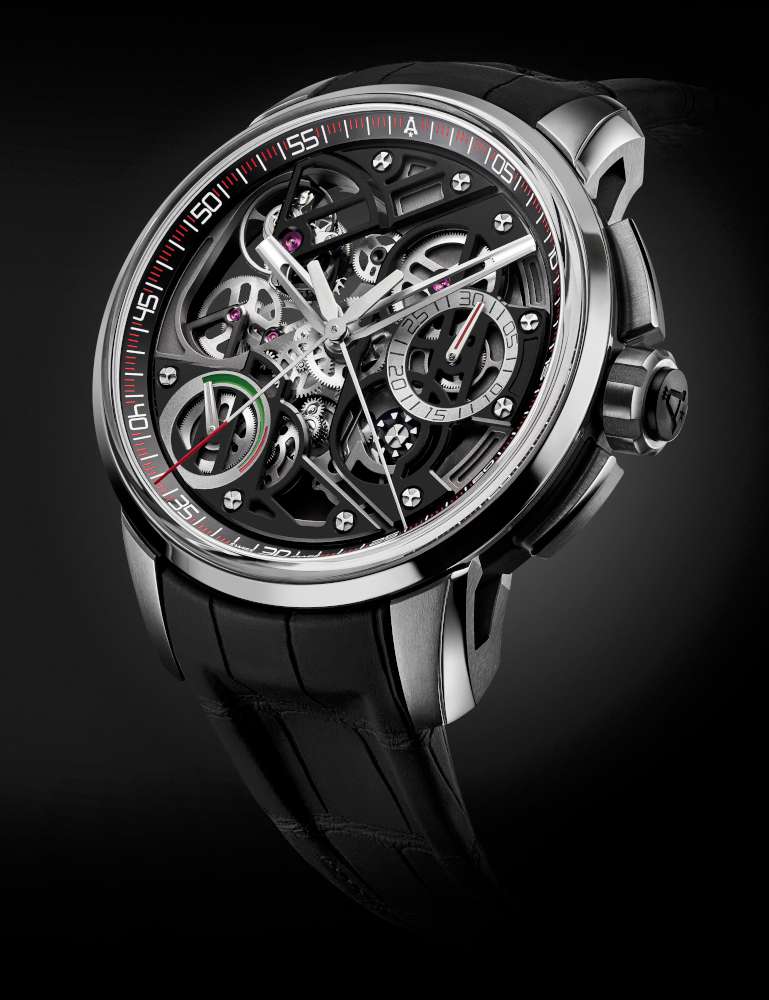 Second crown wheel on the caseback

The caseback provides another view of the tourbillon with its gears, and a second crown wheel that controls the chronograph functions. View of the movement through the caseback is maximized by the skeletonized oscillating weight, in black ADLC-treated metal with a peripheral segment in white gold. The detailing is exceptionally good throughout, with examples including the Angelus three-point screws, and the rotor design that echoes the layout of the six-spoke gears. 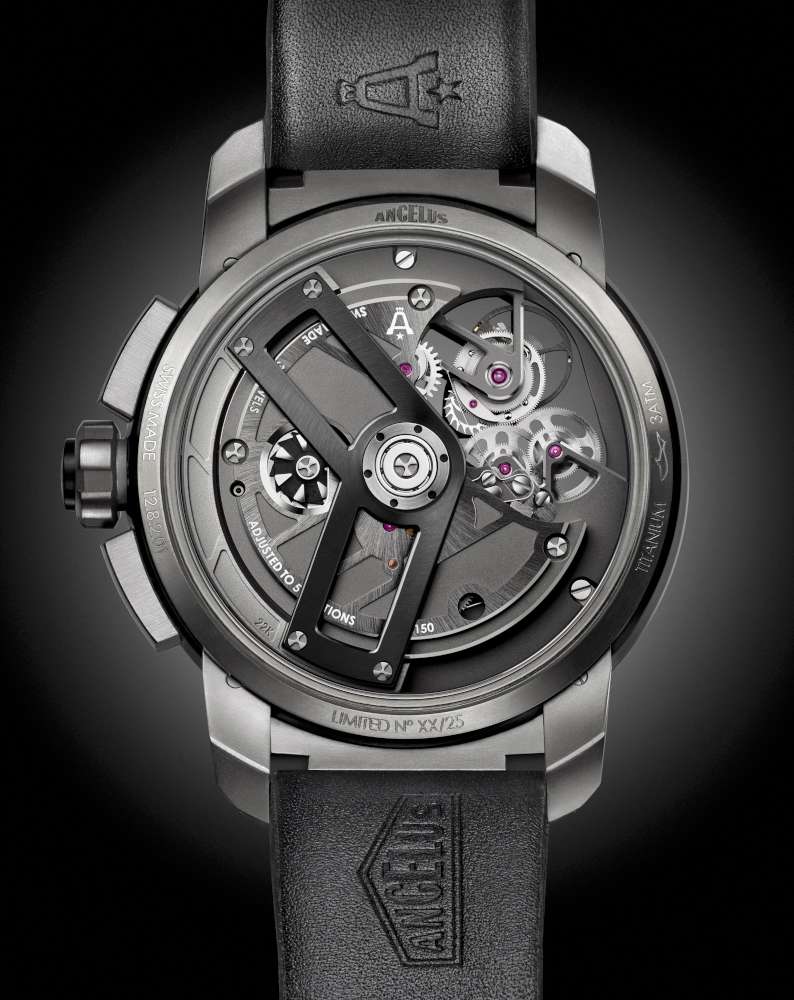 The flyback function enables the chronograph hands to be immediately reset and restarted with just one push of the reset pusher at 4 o’clock while the chronograph is running. This is more complex in a split-seconds chronograph. 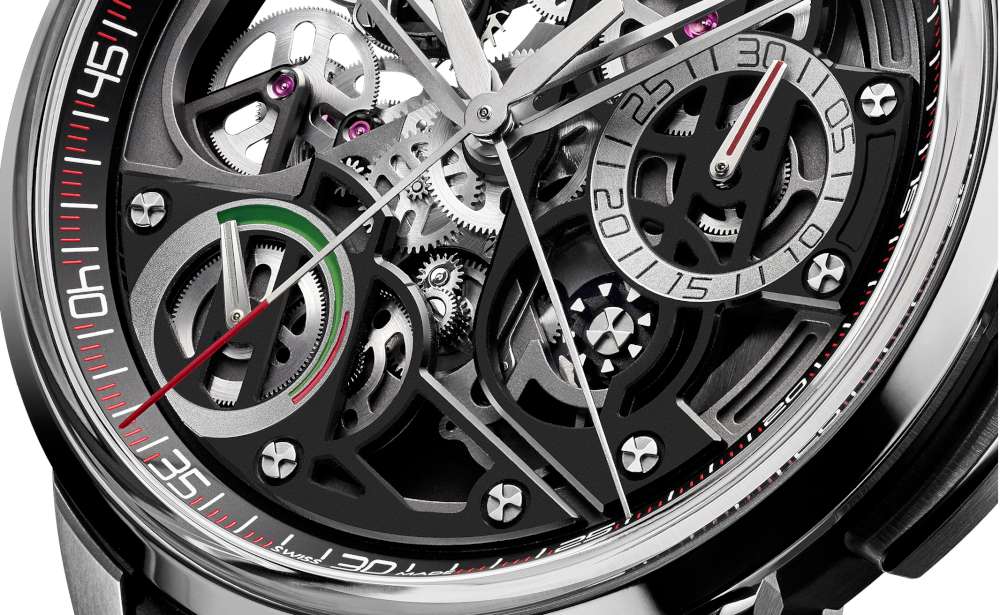 It’s a beautiful piece of engineering, and everything about the watch looks wholly modern. Its sporty nature is suggested by the touches of red on the seconds scale inside the bezel flange, on the chronograph seconds and minutes hands, and on the strap stitching. The skeletonized hands and lugs, and the pushers on either side of the crown, are perfectly in harmony with the design theme. The designers deliberately chose to concentrate on displaying as much of the movement as possible, and so the functional aspects of the watch’s display have been put in second place. So the seconds scale, marked in quarter-seconds divisions corresponding to the 4 Hertz movement speed, is incomplete, with the minute numerals obscuring the divisions at twelve positions along the scale. Likewise the chronograph minutes counter requires careful observation to judge exactly how many minutes have passed. But this watch, like the Breguet Tradition Chronographe Indépendant 7077, is a concept watch. A demonstration of brilliance. 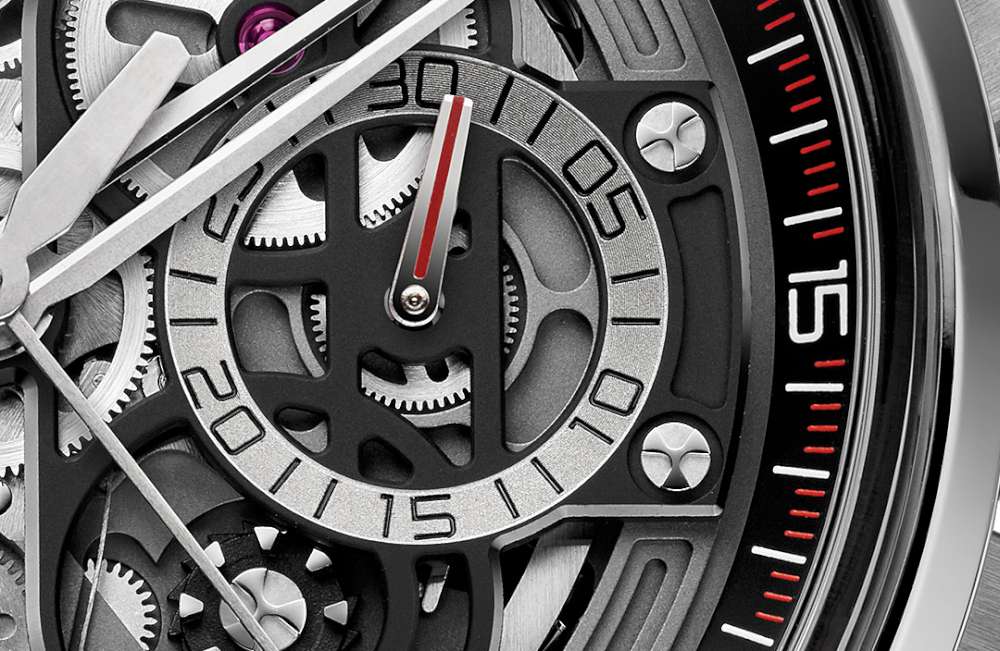 U30 case and specifications

The U30 is a large watch, with a 47 mm titanium case, 15 mm thick, 30 metres water resistance. The strap is in black stealth alligator with titanium insert, or in rubber. The titanium folding buckle has the Angelus logo in relief. The A-150 self-winding movement provides a power reserve of 45 hours.

The Angelus U30 Tourbillon Rattrapante is a limited edition of 25 pieces, reference 0CRAC.B01A.C003U. Each watch costs 55,000 Swiss francs.