Chopard are on a roll. The Ferdinand Berthoud FB1 Chronometer recently won the top prize at the 2016 “watch Oscars” GPHG (Grand Prix d’Horlogerie de Genève). Ferdinand Berthoud is a brand wholly owned by Chopard, created to celebrate the work of the like-named 18th-century watchmaker. At the 2016 Middle East Watch of the Year Prize, Chopard won the “Best High-End Jewelled Watch” category with the Chopard Imperiale. And now, as part of the celebrations marking the 20th anniversary of Chopard’s own watchmaking manufacture, the brand has presented its first ever minute repeater: the L.U.C. Full Strike. 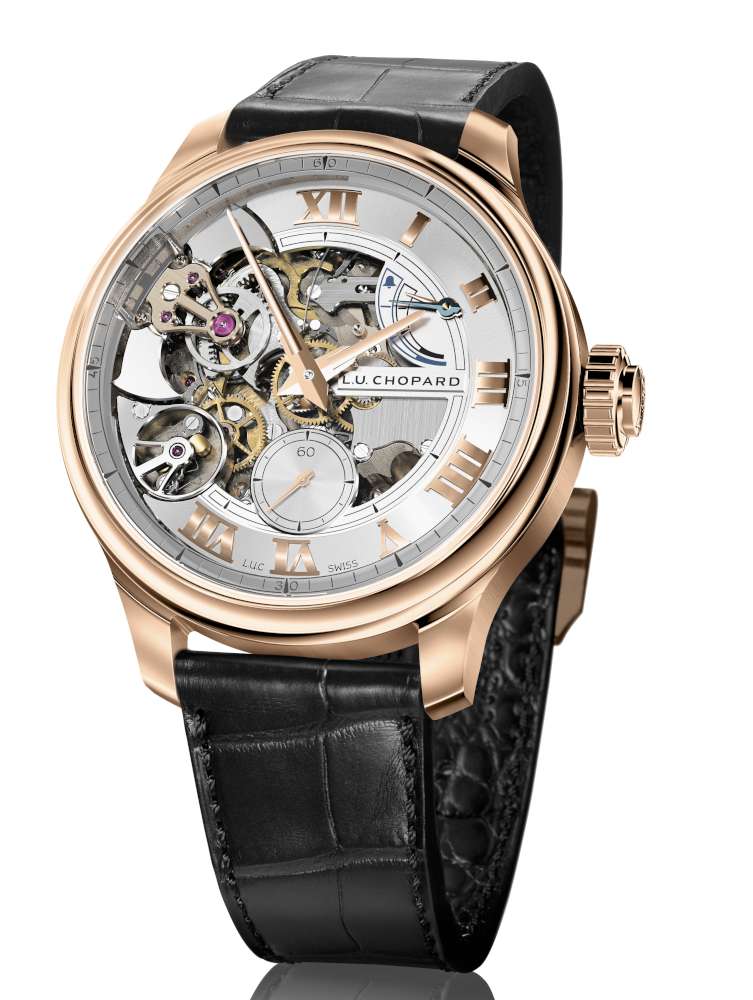 A minute repeater, a watch that can chime hours and minutes on demand, is a demanding test for a watchmaker. There is a single, massive problem that has to be solved, connected to the propagation of sound. Watches need to be water-resistant, which means closing all the points where water could seep in, using gaskets, screw-in caseback and so forth. But if the watch is producing sound, you have to enable the sound to emerge from inside the watch to the open air outside. Some brands, such as Patek Philippe, simply forego water resistance. Many other brands retain the standard 30 metre water resistance, but sacrifice volume of sound. You have to be right up close to the A. Lange & Söhne Zeitwerk Minute Repeater to hear it. A few brands have found ways to combine water resistance and a good volume of sound, notably the Audemars Piguet Royal Oak Concept RD#1, and the Girard-Perregaux Minute Repeater Tourbillon. Chopard have been working for more than six years on its first minute repeater, the L.U.C Full Strike. It incorporates a lot of research and development. And, differently to most brands, Chopard has provided a recording of the sound produced by the minute repeater along with the photos and technical information. The gongs are tuned to C and F.

How have Chopard solved the problem of getting the sound out of the case and into the outside world? A brilliant, though incredibly demanding solution: the gongs, which are usually metal and encircle the movement, are in sapphire, and are continuous with the watchglass. The watchglass and the two gongs are actually machined from one block of sapphire crystal. So the watchglass itself becomes the watch’s “loudspeaker.” The absence of any break between gongs and resonating surface optimizes sound transmission. Chopard say that this solution is a first in watchmaking, and have filed a patent for this innovation. It comes as a surprise to see sapphire crystal used for a long, thin component such as a gong that is struck repeated by a metal hammer. We are all familiar with the fragility of glass. Sapphire crystal on the other hand is different. Chopard have tested the gongs with 1.5 million impacts from steel hammers, and they have survived unscathed. Sapphire crystal is inherently tough, but that makes machining it a long and difficult process.

Chopard have deconstructed the dial to show as much as possible of what’s going on, in particular the chimes mechanism which is in full view. The Calibre 08.01-L movement was designed in-house and has three patents pending. On the left, you can see the hammers and the strike governor, which controls the speed of chiming, at 6 o’clock a small seconds subdial, and at 2 o’clock, a double power reserve indicator, one for the time-keeping movement, and one for the striking mechanism. The two movements are wound separately using the crown, winding the movement mainspring when rotating in one direction, and the chimes mainspring in the other. The crown is fairly large at 8.3 mm diameter, facilitating winding. The two mainspring barrels are slipping, so that overwinding is impossible. 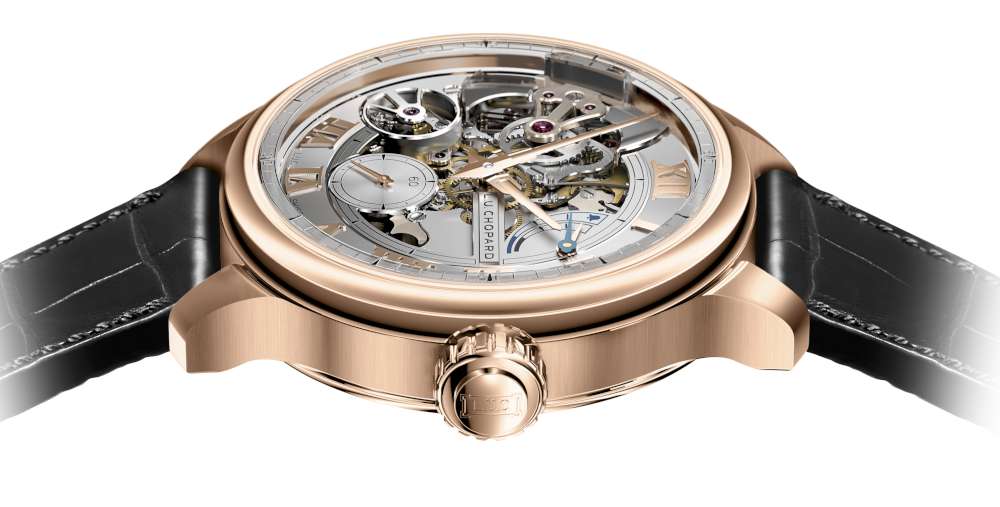 The chimes movement can strike 12.59 – the time that requires most chimes of all – 12 times. An important difference between the L.U.C Full Strike and most minute repeaters is that there is no slider to be depressed to activate the chimes. To get the watch to chime the time, you just have to press the pusher in the crown. This solution is more elegant, and infinitely more practical. The customary slider is on the left-hand side of the case, which is normally hidden under shirt and jacket cuffs. The pusher on the crown is ready for operation at all times. 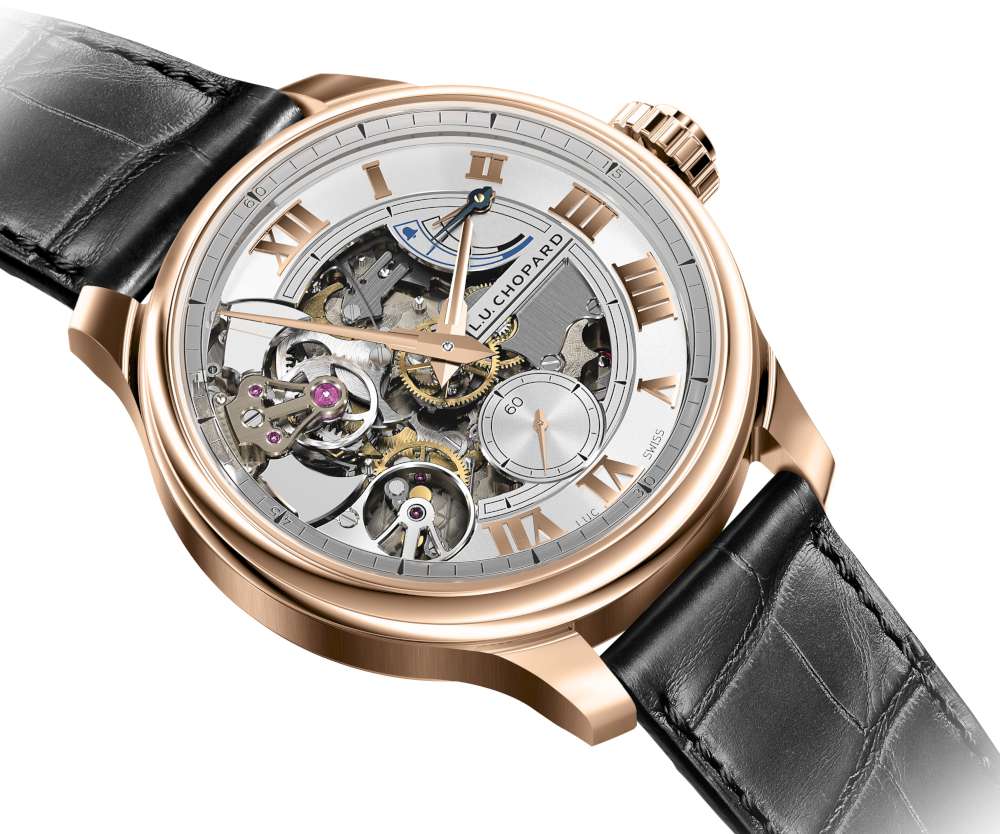 Chopard have developed a system that eliminates periods of silence between the different parts of the strike, in other words between the hours and quarters, and the quarters and the minutes. Most minute repeaters allocate a fixed time window for each sequence, which causes periods of silence in the case, for example, that there is just one hour chime, or no quarter chimes at all. In Chopard’s movement, the gear trains for each sequence are connected, so that when one has completed its task, it automatically triggers the next. In the image below, the chime system. 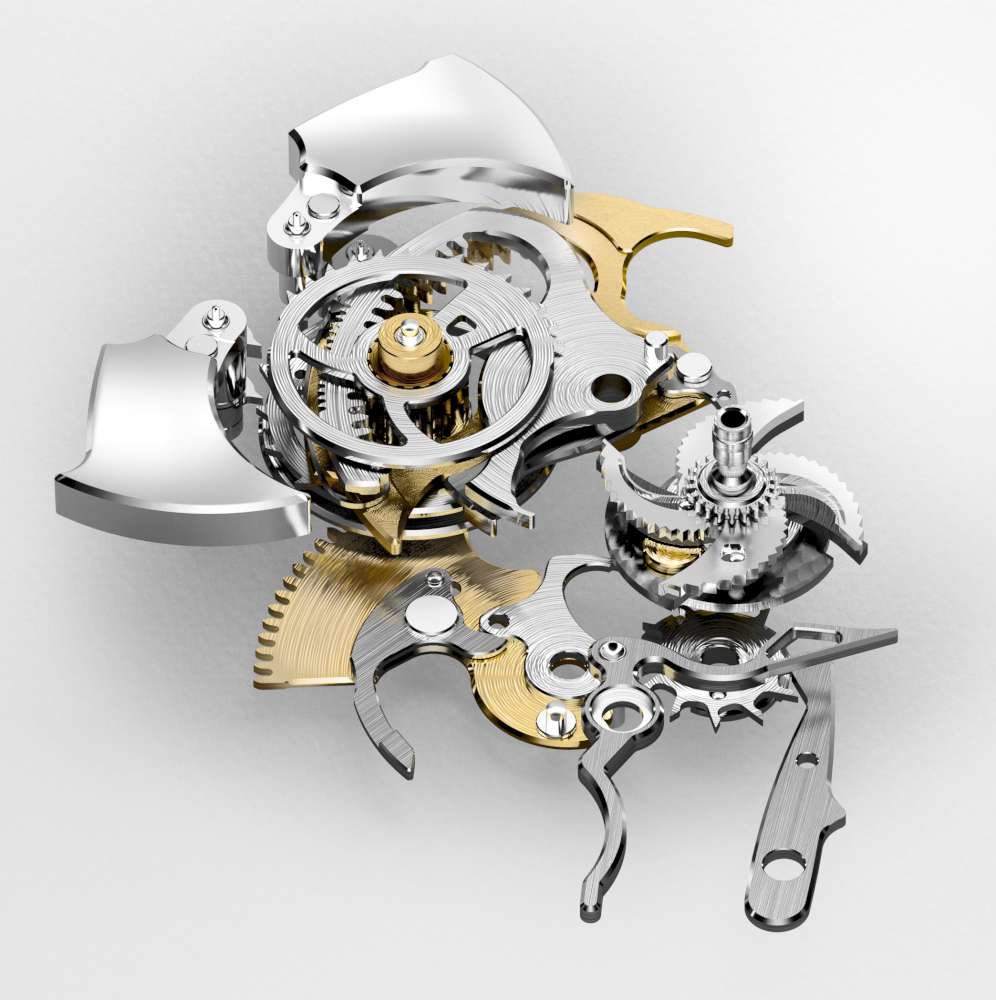 Another problem facing watch designers working on a minute repeater is the number of things that can go wrong. What happens if the watch starts chiming, but the chimes mainspring runs down before it’s completed the chimes? And what happens if the owner mistakenly tries to change the time while the watch is chiming? Chopard have put in place seven security features that prevent damage to the watch in case of inadvertent mishandling. And when the power reserve for the chimes drops below a minimum, the chiming mechanism is automatically deactivated. 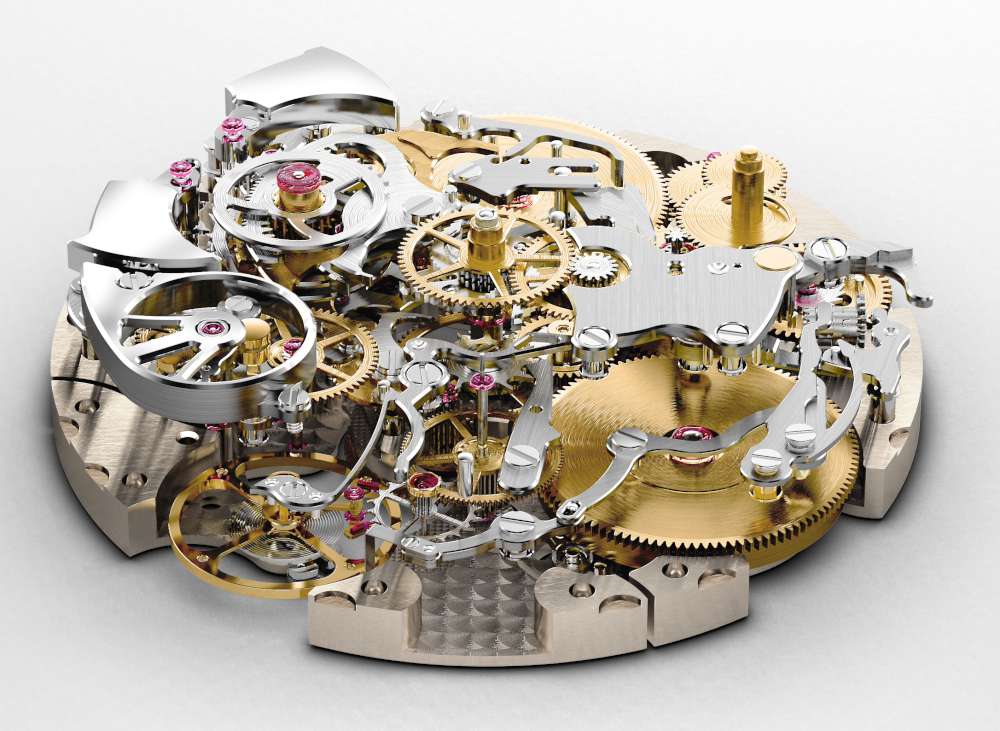 The watch is hand-wound and has a power reserve of 60 hours, It runs at 28,800 vibrations per hour, 4 Hertz, and has COSC chronometer certification. 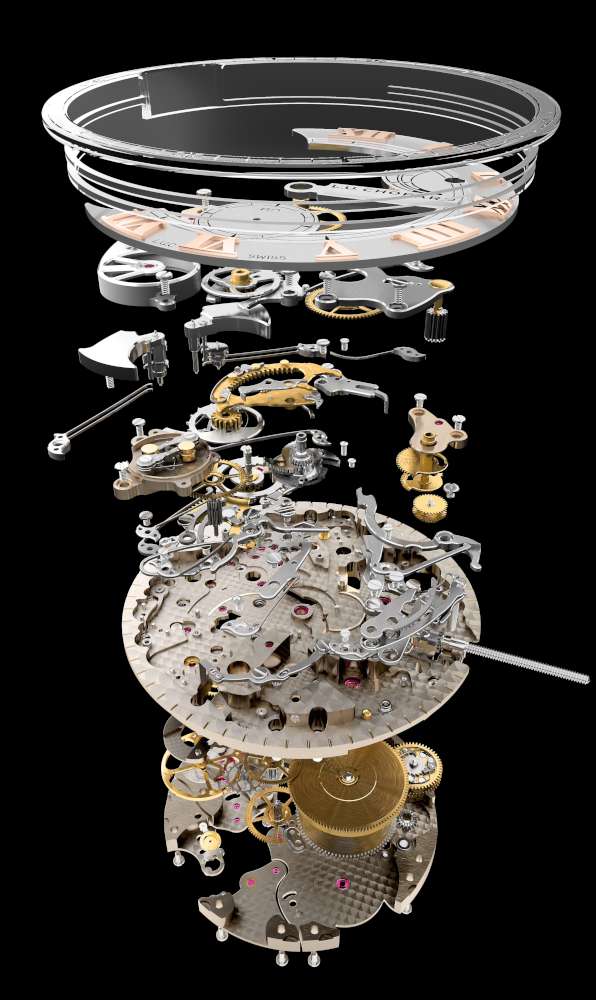 Chopard’s watches look good, and this is no exception, with a 42.5mm case in fairmined rose gold. It is relatively slim at 11.5 mm, considering that the movement comprises 533 components and 63 jewels. There is a contrast between the vertically-brushed caseband and the polished bezel and caseback. The watch has a double-sided, hand-sewn, plant-dyed, CITES-certified alligator leather strap, which ensures that the watch looks good whether you’re looking at the front or the back. The movement is superbly finished and bears the Geneva Seal, Poinçon de Genève. The mainplate and bridges, which dominate the caseback view, are in nickel silver with Côtes de Genève. 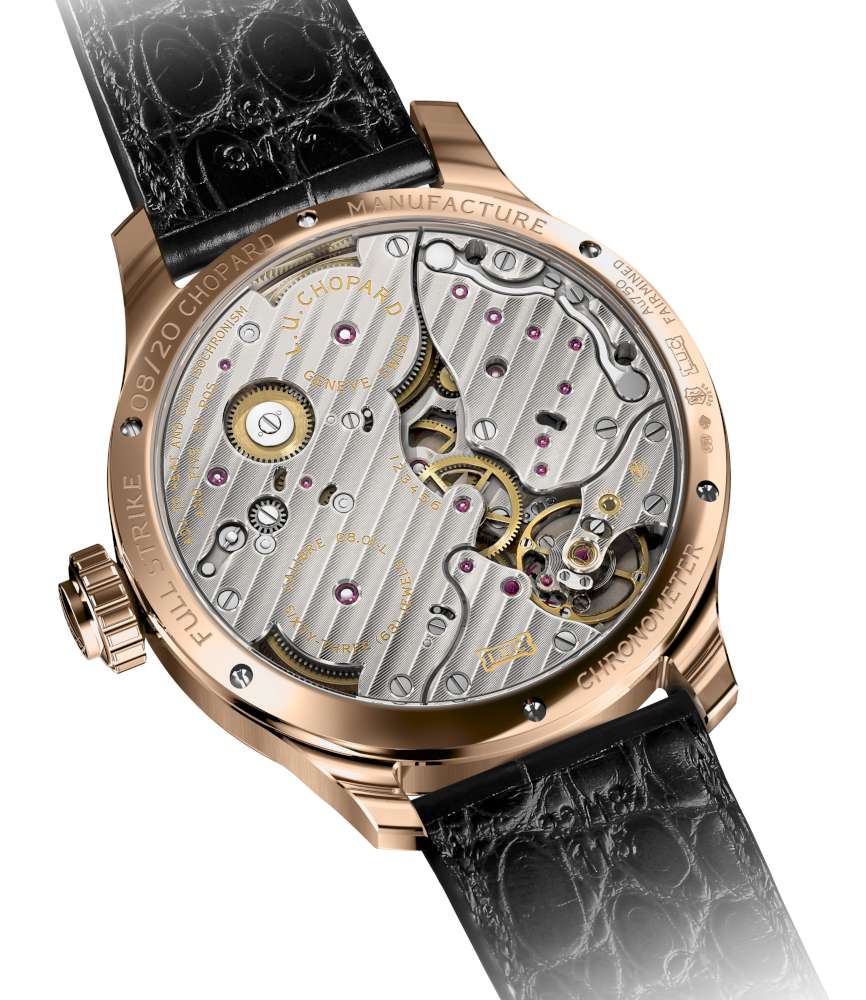