This interview by Henry Neuteboom was originally published on the luxos.com website in 2017.

Carole Forestier-Kasapi has worked on some of the brand’s revolutionary new watches such as the Panthère Joueuse, Astrotourbillon, and the Astrocalendaire. “I like challenges and we can always improve something,” says Carole, “I strongly believe that we can always push boundaries and be creative, even when it’s not a complicated watch.”

Over the last ten years or so, Cartier have consistently surprised the watchmaking world with a whole series of incredible pieces. Examples include the concept watches ID One (2009) and ID Two (2012), which presented the sort of technology that could represent the future of high-end watches. But Cartier’s watches comprise many production watches with the same level of research and innovation. Carole Forestier-Kasapi, Director of Movement Creation, is directly involved in these processes. We spoke to her in January 2017 at the Geneva watch fair SIHH. 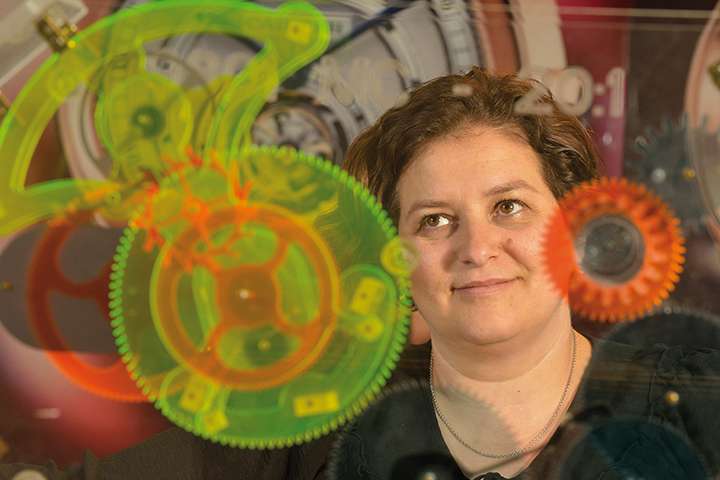 There are a fair number of female watchmakers, but very few who have risen right to the top of the profession. Has it been difficult?

Carole Forestier-Kasapi: Yes, it has! Because it’s a male domain, it’s a conservative industry, because I’m not Swiss but I’m French, because they need proof that you have the capacity before they are confident about you. It’s difficult. You always have to prove your capacities.

How did you reach this profession?

In fact I come from a watchmaking family: my brother, my mother, my father are all watchmakers. In fact I fell in love with watchmaking very early because my parents had a watchmaking shop in Paris and I spent a lot of time there. I am very curious about how things work, and I started to disassemble one movement, then a second one, and to read book after book to understand them better. Soon I became passionate about the subject.

When did you join Cartier?

19 years ago. Next year it will be a big anniversary… at least for me!

Would you say that over the last 20 years, one of the big developments in watchmaking has been that the movement has changed from being a purely functional part of the watch to something having its own aesthetic interest?

In fact the main change was regarding the fact that before, we were etablisseurs, we bought finished movements from a supplier, and these movement were simply placed into cases. Now we can say that we are a totally integrated manufacture, because we have our own internal movement development, our own internal manufacturing units, and our own workshops for assembly. So we have moved from a position of etablisseurs to a position of watchmakers. Thanks to this change, we are now able to be as creative in movements as we are in the aesthetics of cases. 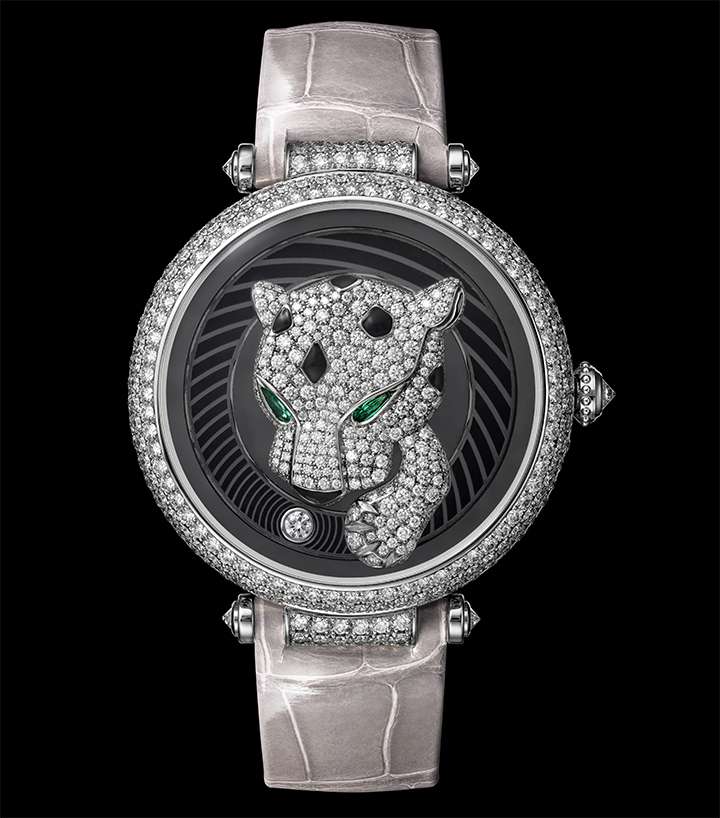 The 2017 collection includes a piece called the Panthère Joueuse, in which the dial features a panther cub whose paw indicates the minutes and the ball that it is chasing marks the hours. I imagine that that panther is much heavier than a normal watch hand so I guess that it must take quite a lot of energy to move it around the dial?

That’s right, it’s not a complication because you have only two indications, hours and minutes, but it’s complicated because you need to find new solutions in terms of power, and shock resistance. You need about 20% more energy compared to a regular watch with two normal hands, because it is a panther, a three-dimensional piece made of gold. It’s heavy.

Another watch, Rotonde de Cartier Day-Night Retrograde Moon Phases, seems to reveal a more astronomical approach to time. Are you inspired by the movement of the planets as the primary source of time?

In actual fact, if you are look at the history of Cartier, we made a lot of travel clocks with this sort of large day/night indicator. So the inspiration is our history, more than astronomy, even though of course, it is also linked to astronomy. We wanted to make a retrograde indicator for the moon phases, in order to propose a variation without the moon hand on top of the night and day disc. 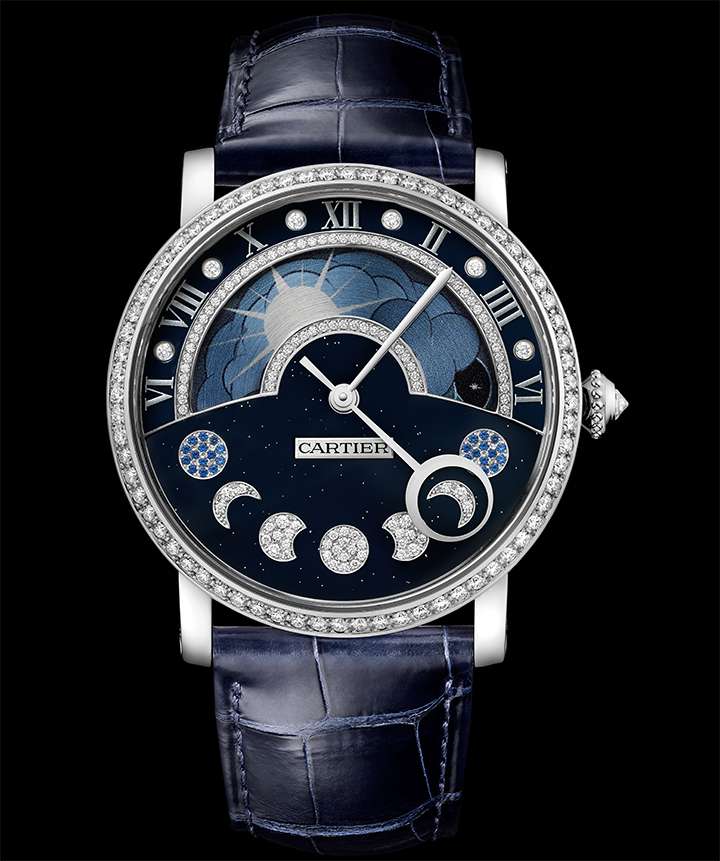 That watch is the latest in a series of progressive versions. Another beautiful piece that developed over time is the Rotonde de Cartier Astrotourbillon, which began with a solid dial, while the latest version presented in 2015 was skeletonized. How does this process take place? 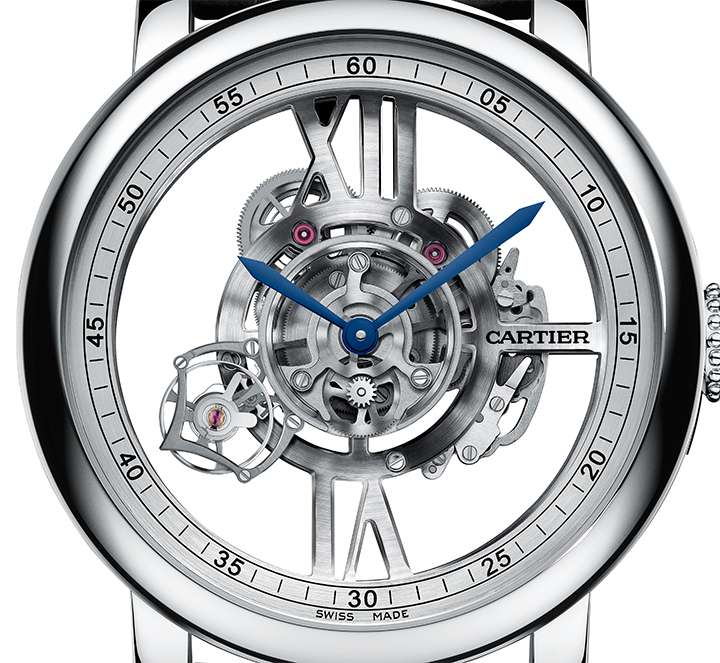 The Astrocalendaire, presented in 2013, is a perpetual calendar that looks like a theatre, based on an architecture of concentric rings. That watch is really striking because it is completely different from any other sort of perpetual calendar. How did you arrive at that sort of approach?

When they asked me to develop a perpetual calendar, I didn’t want to start with something already existing. We didn’t have a perpetual calendar in the collection, and I wanted to resolve the problems inherent in a perpetual calendar. There are two major problems in a perpetual calendar: first, it’s difficult to manage the power because you need extra power just before the jump of the date, and second, there is the risk of damage, when you set the date. If the mechanism is in the process of jumping from one date to another, and you try to set the date at that moment, you are likely to break the mechanism. For me this is not acceptable, and I wanted to find an alternative solution solving these problems. In a regular perpetual calendar, the complication comprises just levers, stars, jumpers and springs. In my solution there are no levers, no stars, no springs, no jumpers, it’s all done by gears. There is no risk of breakage. 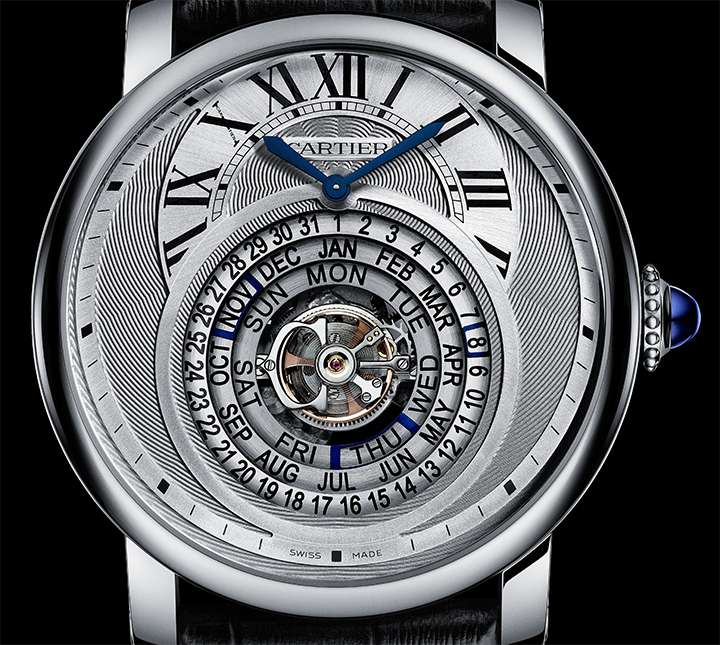 When you are working on a movement like that, do you start by sketching on paper, or is it mainly computer?

Would you say that your approach is quite minimalist, you want to simplify things?

I want to improve something. If I develop a perpetual calendar similar to those that already exist, without improving the system or introducing an alternative solution, it’s a shame. I have the possibility of doing better.

The watches that you work on, Cartier’s high-end pieces, often have a dark, tough aesthetic, such as the Astrocalendaire and the Astrotourbillon. Is the aesthetic, visual part linked to the development of the movement, and to your idea for the watch?

You have to remember that at Cartier we have designers for the aesthetics aspects, and they work together with engineers to find the solution. I’m not in charge of choosing the colour of the dials and so on. It’s really the design department that works on that.

Is there a function or a complication that you dream about, that one day you would like to create?

No, not really. Every time I receive a brief, it’s always a pleasure for me to accept the challenge. In our discussions with the marketing team regarding the brief, I have always a hundred questions about what they put inside the brief because I like challenges and we can always improve something. I strongly believe that we can always push boundaries and be creative, even when it’s not a complicated watch. The challenge is more important than new complications.

So the process starts like that, the marketing department sends you a brief and say, we need a new complication…

Yes and no, because, I always receive open briefs, so I can always propose what I want, and sometimes the brief itself is very open. When they wanted the Astrotourbillon, to mention a watch that you spoke about, the brief was: Carole, reinterpret the tourbillon! Voilà.