Roger Dubuis has launched a partnership deal with Pirelli, the tyre company that sponsors Milan football club F.C. Internazionale, with its black and blue livery (click here to read about the Excalibur Spider Pirelli). The Roger Dubuis Excalibur Spider Carbon seems to have been designed to keep the other Milanese team – A.C. Milan – happy, with its black and red colour scheme. 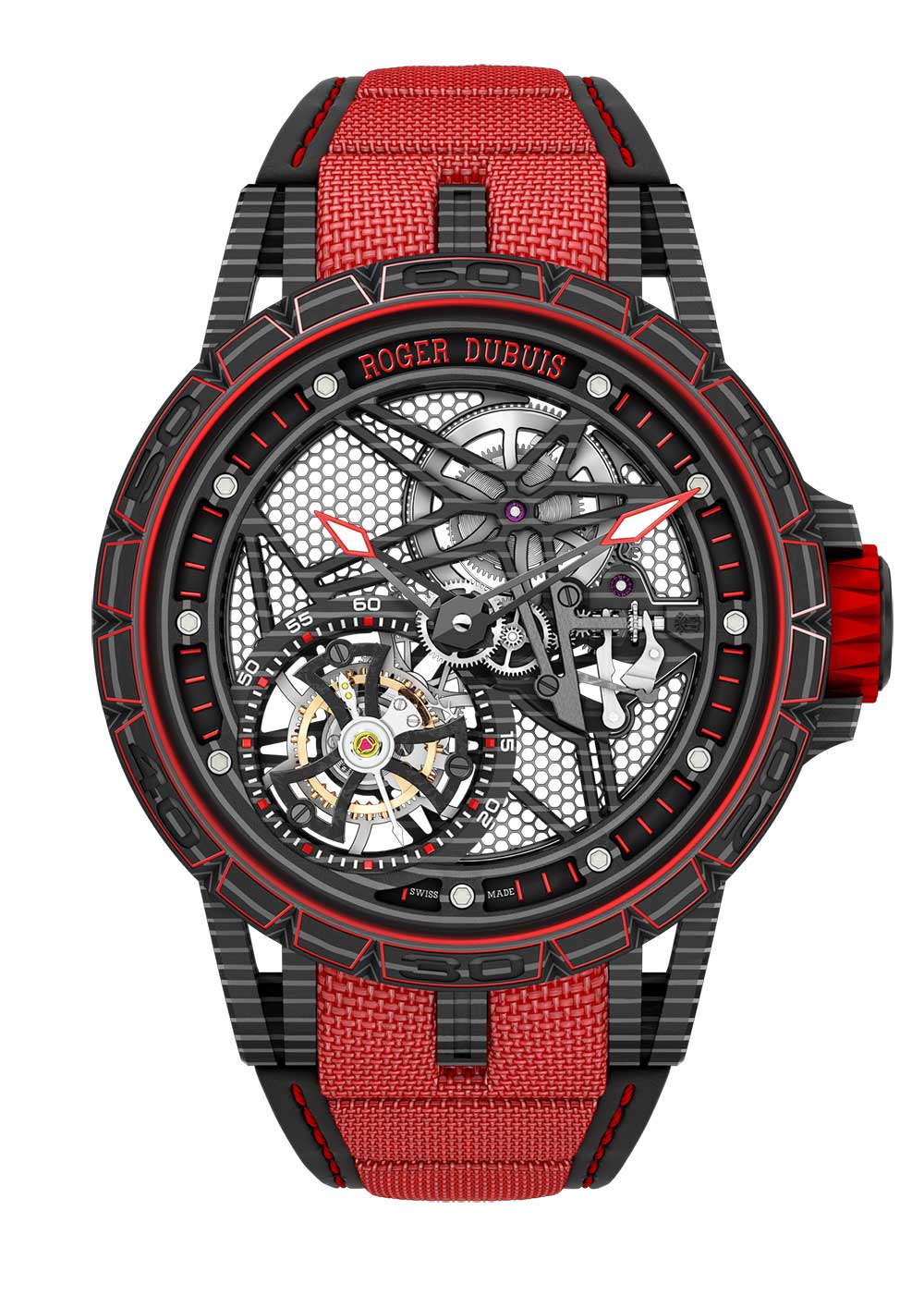 This model was first released in 2016, featuring SMC, sheet moulding carbon, used for the case. In this new version of the Excalibur Spider Carbon, plates and bridges are also in laminated carbon. and carbon has also been used for the tourbillon cage for the first time. The objective of making a tourbillon cage in carbon was initially purely a design consideration, in other words to make the watch look cool. But, when they came to testing the piece for the first time, the Roger Dubuis engineers were surprised to find that the watch continued running for 70 hours, a notable increase with respect to the expected 40 hours. This extra benefit is due to the very light weight of the carbon tourbillon cage. The complete watch is in fact lightweight and very comfortable. Another design feature is the supercar-type grilles. These underwent a structural evolution over time: the engineers made them first in titanium, then in carbon composite, and lastly a graphite composite, so that a large proportion of the watch is now in carbon in one form or another. 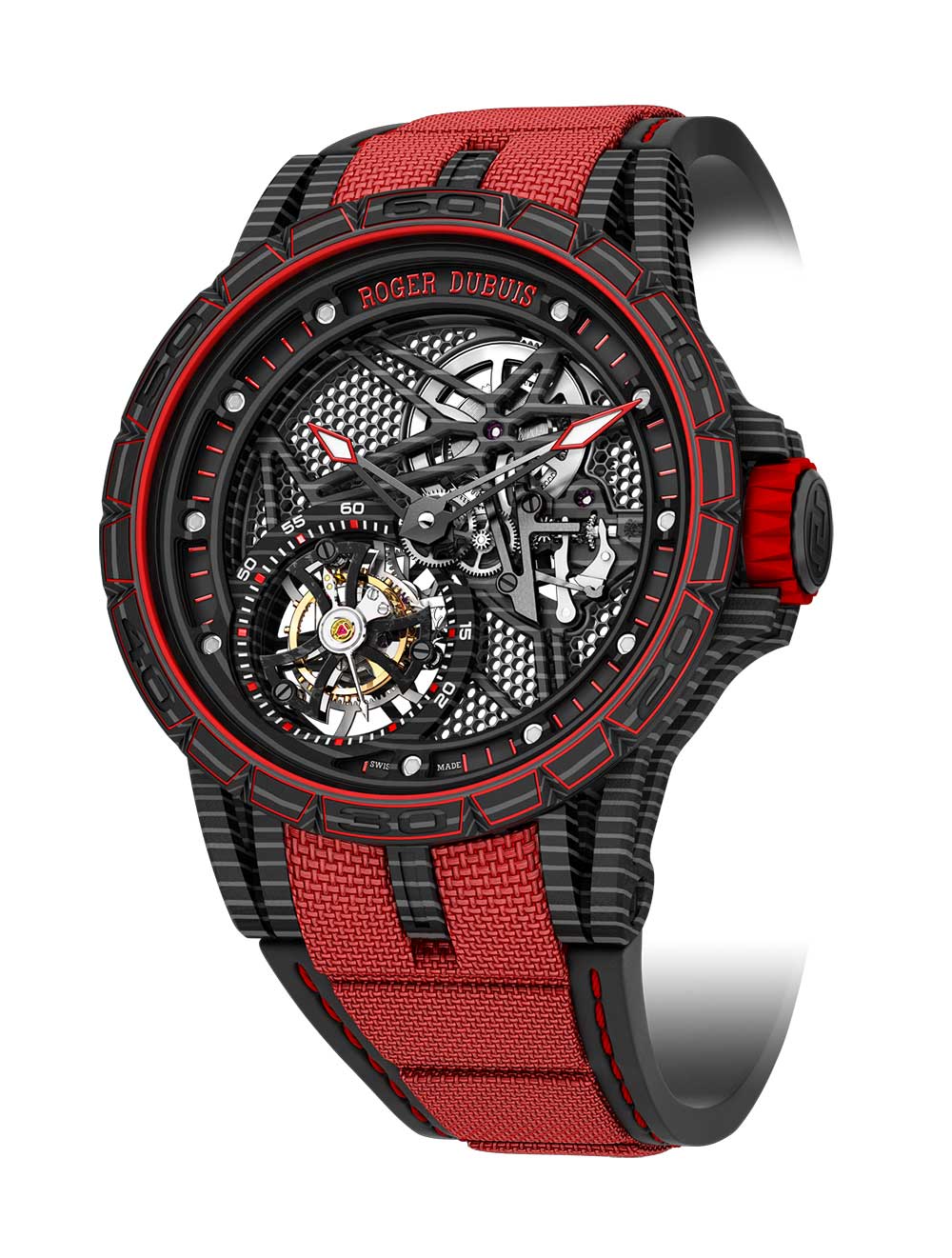 The case is 45 mm in diameter and 14.02 mm thick, water resistance 5 atm, made in laminated carbon, with a bezel in the same material, coated in red lacquer. Crown and caseback are in titanium; the crown has a red rubber insert. The strap is in black rubber with a red fabric-like inlay, and a titanium clasp.

On the dial, the titanium screws are coated with SuperLuminova; the skeleton hour and minute hands are in gold with a black PVD coating, red tips with cavity filled with SuperLuminova. Seconds are indicated by the rotation of the one-minute tourbillon, whose case is in the distinctive Maltese cross shape that is a brand hallmark.

The hand-wound calibre RD509SQ is based on Roger Dubuis’ very original Astral Skeleton structure, in which the wheels are located at significant points of the star-shaped bridges. It must have been an incredibly complex design operation, and the company is understandably reaping the benefits with a sequence of variants. The tourbillon balance runs at 21,600 vibrations per hour, 3 Hertz. Precision is enhanced, say the company, by the rigidity of the carbon structure. 179 components, 19 jewels. 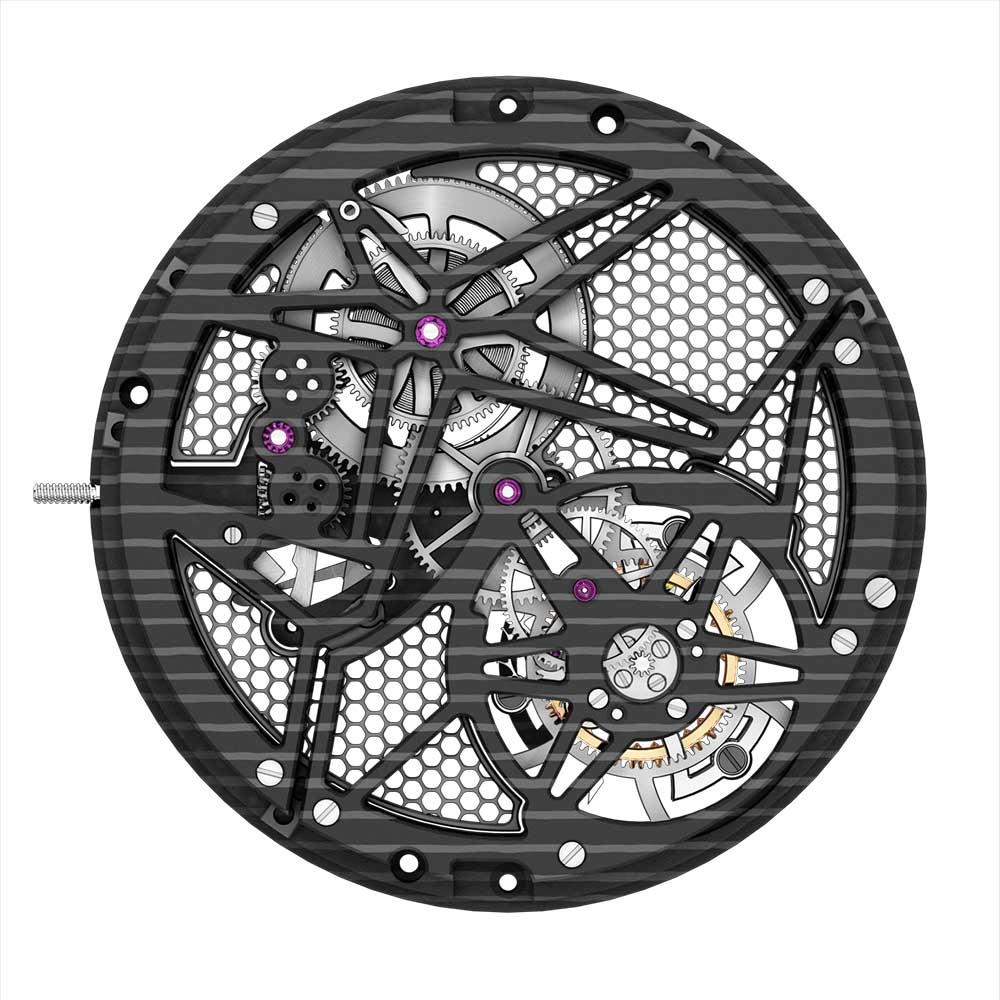 The Roger Dubuis Excalibur Spider Carbon is a limited edition of 28 pieces, each costing 180,000 Swiss francs. The watch has Poinçon de Genève certification. It was presented at the watch fair SIHH in Geneva, in January 2017. 24 were sold on the first day of the show. More information from the Roger Dubuis website.