Hamilton’s latest version of the Khaki Aviation X-Wind is an example of a fairly common trend in watches, making them look complicated and tough. This must be one of the meanest, toughest and most complex chronographs of all, with three crowns in addition to the usual chronograph pushers, and three rotating bezels. All this equipment enables the watch to do something that – probably – no other watch can do, namely calculating the magnetic bearing on which to fly in order to compensate for a crosswind. It’s the sort of function that makes the watch ideal for people who dream of flying. It recalls the dizzying array of instruments in a cockpit. Whether you’ll ever use the crosswind function is irrelevant. In any case, the watch has a lot of other positive features. It’s a classic pilot’s watch at least in its central section, with a modified Valjoux 7750 movement, a water resistance rating of 100 metres achieved by using screw-down crowns, and a price below €2,000. 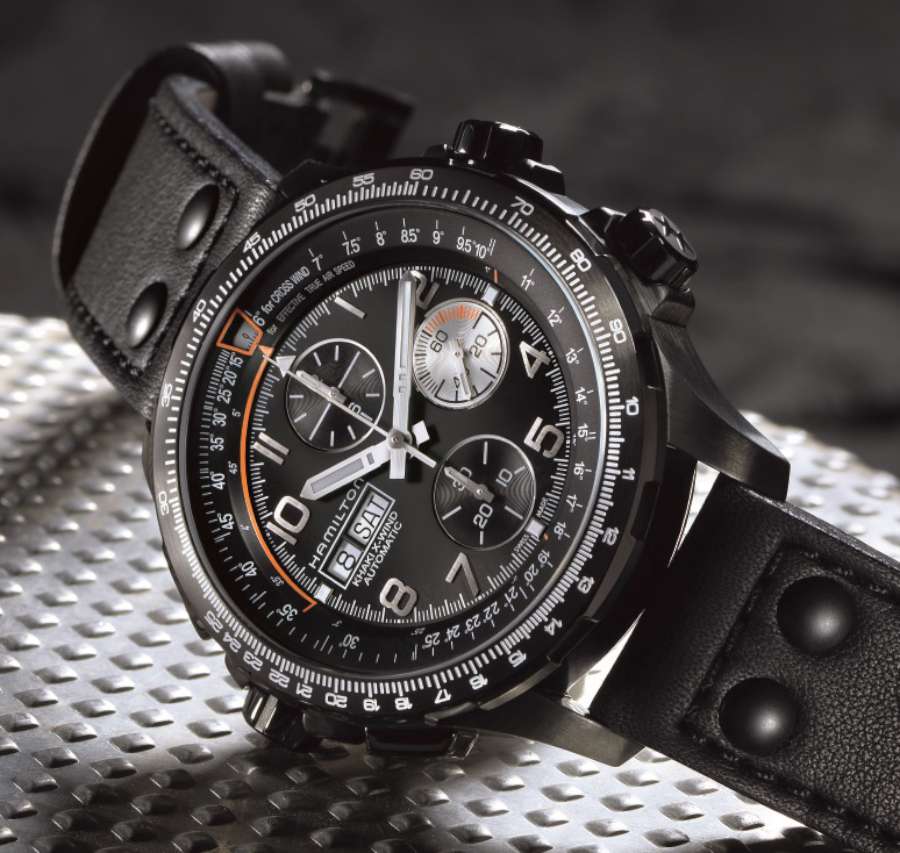 The previous version had a natural metal case and a natural leather strap. The new piece has a black PVD case, 45 mm in diameter, with long downward-sloping lugs that help keep the watch in position on the wrist but require a fair arm size. The strap is in black leather with a black PVD H-buckle (two prongs). The dial has three counters, which are rotated by 180° degrees with respect to the usual Valjoux 7750 arrangement. So the chronograph pushers are on the left of the case and inverted with respect to the usual arrangement, so that you start the chronograph using the pusher at 8 o’clock and stop it with the pusher at 10 o’clock. The day and date windows are at 9 o’clock, and continuous seconds are shown on the silvered subdial at 3 o’clock. The Hamilton designers have given this subdial a seconds scale in the top half, which could be useful when setting the watch using the stop-seconds function and for verifying the movement’s precision. Strangely they have given the 30 chronograph minutes subdial at 6 o’clock only a rudimentary scale, with just five-minute divisions. This is a pity because it makes using the chronograph to take a measurement of elapsed time beyond one minute pretty much impossible. The subdial at 12 o’clock is for 12 chronograph hours, and its design recalls what artificial horizon cockpit instruments used to look like. They could have given the 30-minute subdial a complete scale and make it look like an altimeter… The chronograph seconds scale is almost complete, with the quarter-second scale interrupted only at 3, 6 and 9 by squares of SuperLuminova. 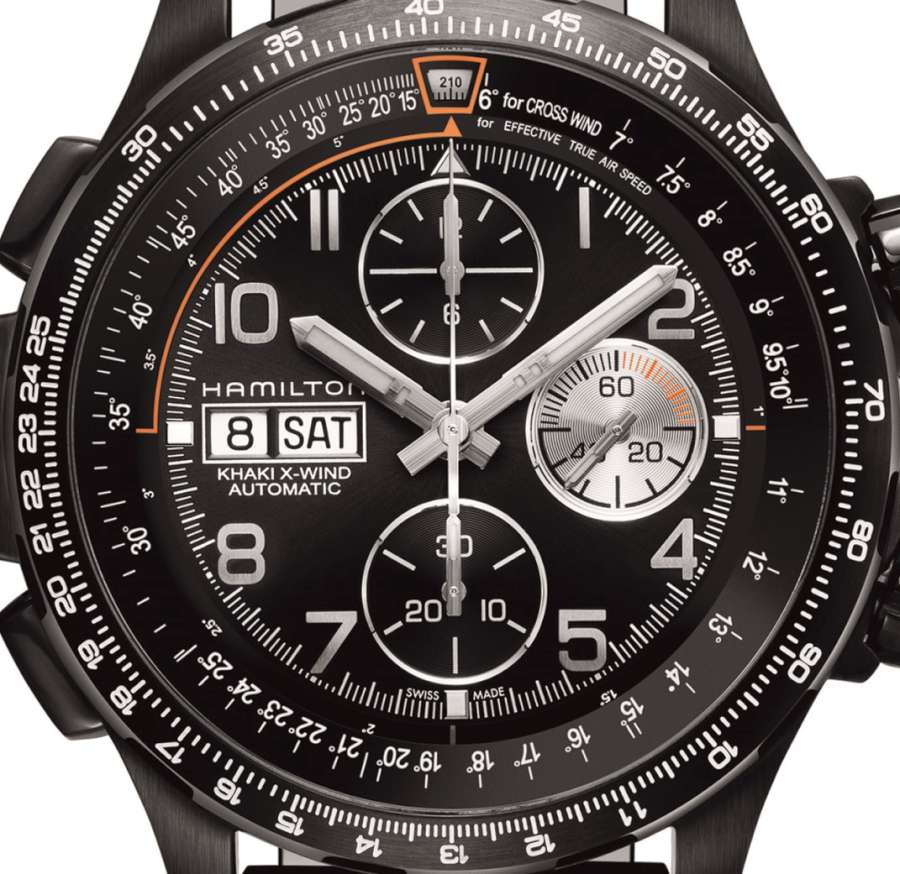 The drift angle calculator is complicated. Briefly, you use the external non-ratcheted bidirectional rotating bezel, which has a logarithmic scale, and the two internal bezels, one on top of the other, controlled using the two crowns on the right-hand side of the caseband. You set the wind direction on the scale visible through the orange-framed window at the top of the dial, by rotating the inner bezel so that the direction shows up in the window (in the photo below, 210°). You rotate the external bezel so that the aircraft’s speed is shown opposite the orange triangle (in the example below, 410 knots). Then you mentally calculate the crosswind angle, which is the difference between the magnetic heading and the wind direction. You find that angle on the external rotating bezel, and you can read off the angle of drift from the inner rotating bezel, where the scale is in two parts, from 0 to 6° on the innermost scale, and from 6° to 45° on the next scale out. Use this angle to correct the heading. It sounds incredibly complex and makes Breitling’s Navitimer with its circular slide rule simplicity itself. But, as I already mentioned, I think that the Khaki Aviation X-Wind is a watch for dreamers. 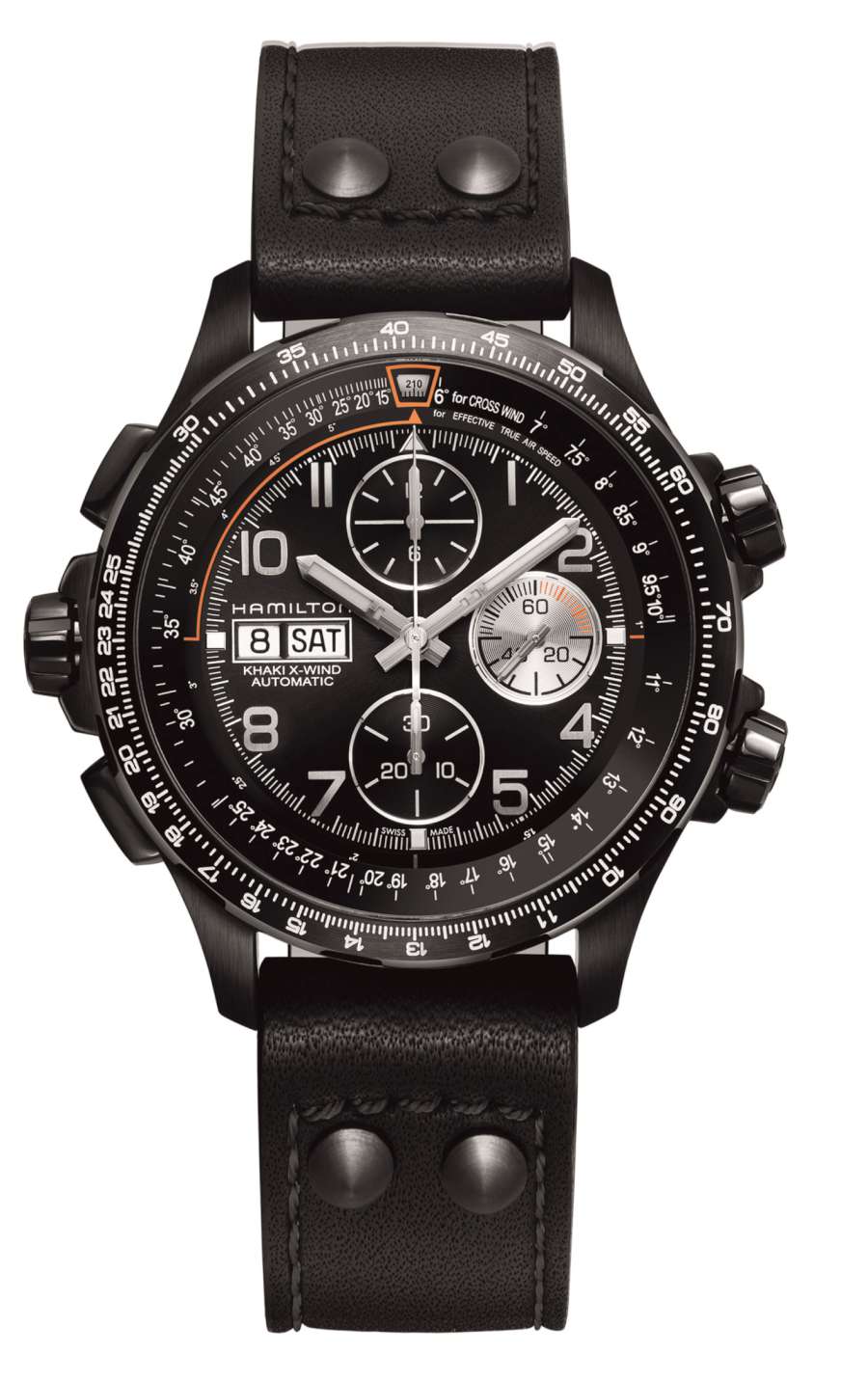 Unfortunately I don’t have a caseback view of the new Khaki Aviation X-Wind, but it will be similar to the previous version. The movement is the H-21, a modified version of the Valjoux 7750. One of the improvements is the 60-hour power reserve. Hamilton say that “the entire kinematic chain has been refined, from the barrel to the escapement, and the escapement regulator has been suppressed, facilitating optimal reliability and precision.” The steel caseback looks like it could be an angle of bank indicator, which would be an attractive feature using the oscillating weight (I think someone has done this but I can’t remember who, any suggestions?), but it’s not, it’s just an engraving that evokes the idea of aeronautical navigation, with a window revealing something of the oscillating weight and the movement underneath. 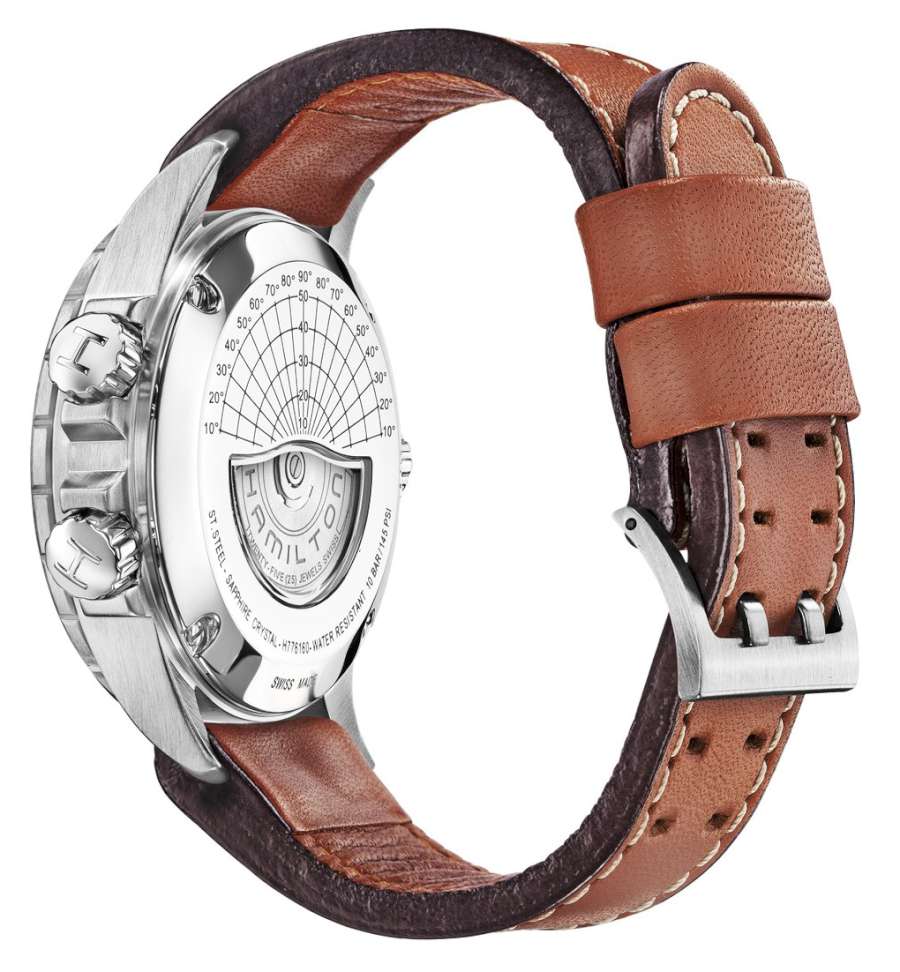