The Hamilton Ventura was introduced on 3 January 1957, and so this year, 2017, Hamilton is commemorating the 60th anniversary of this distinctive triangular watch. It was designed by Richard Arbib and it was the first electrical, battery-powered watch in the world. It was initially named the Hamilton Electric 500 before becoming the Ventura. In these photos taken at the Hamilton stand at Baselworld in 2015, I am wearing, with no little emotion, the watch that belonged to Elvis Presley and that appeared in the film Blue Hawaii in 1961. 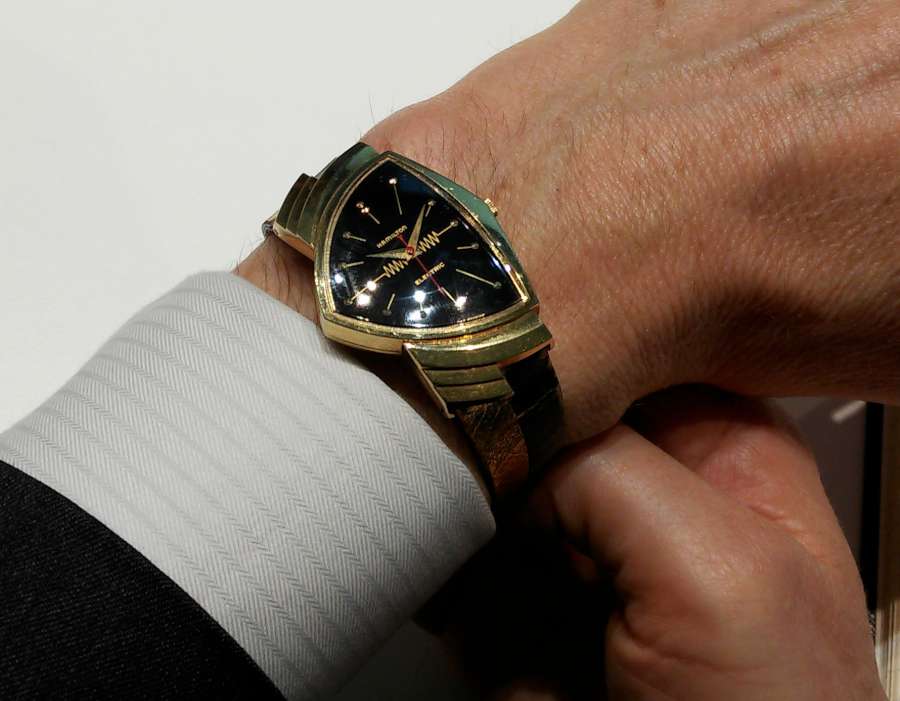 The Hamilton Ventura as worn by Elvis Presley

This watch has an electric movement, the Model 500, in which the balance spring itself is an electromagnet with a trip switch, so that a brief burst of current provides the energy needed to keep the oscillations going. At Hamilton, work started on the idea of an electric movement in 1947: the first working model was created in 1951, and the first commercial version was presented in 1961. Unfortunately it presented maintenance problems, principally due to corrosion that prevented conduction across the contact point of the balance wheel hub. The watch was produced up until 1969, when the watchmaking world was about to suffer the tidal wave of quartz movements, beginning with Seiko’s Astron. 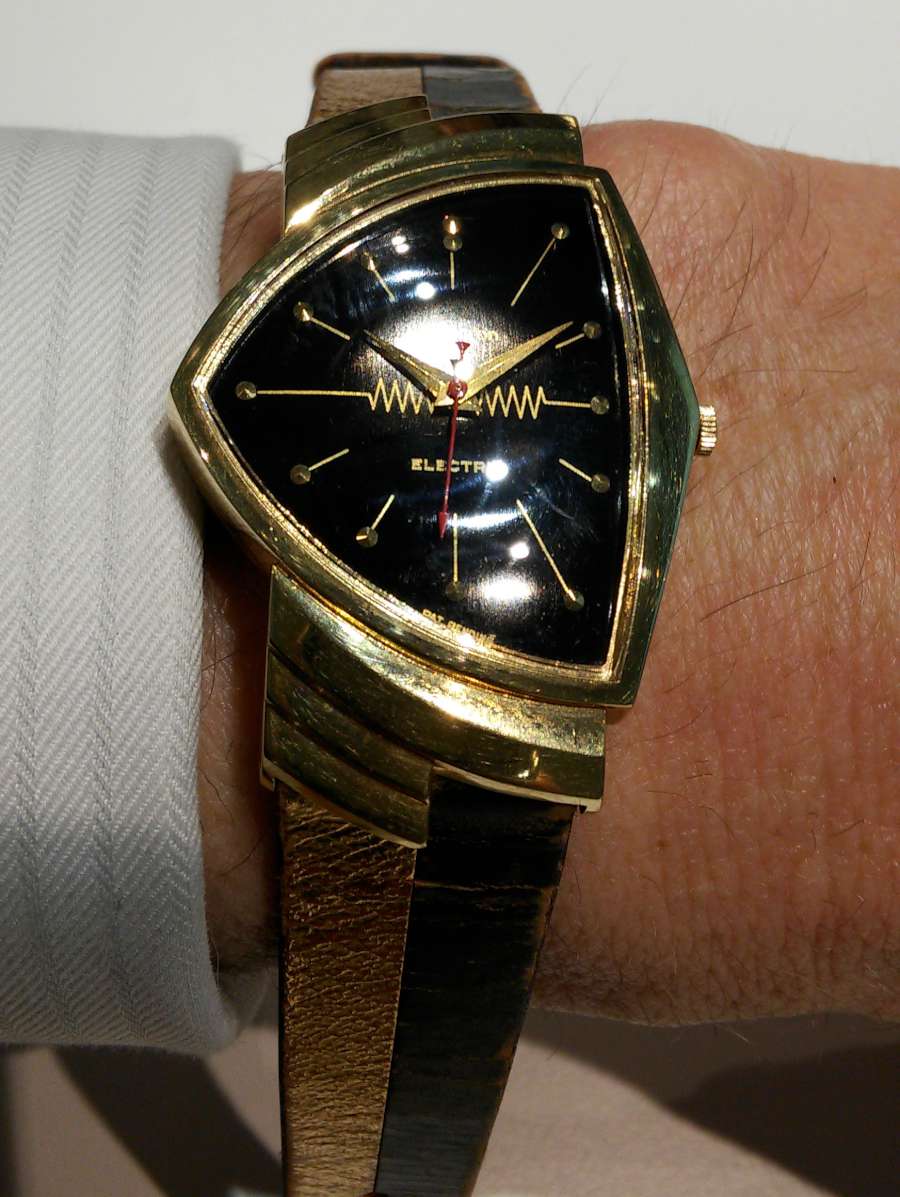 This early model was still known simply as the Hamilton Electric

With these precedents, Hamilton is totally justified in continuing to make quartz versions of the Ventura. For the anniversary, three new models have been introduced, a quartz version based more closely on the original Ventura, another quartz Ventura with a jeans dial and strap, and a mechanical watch that makes direct reference to Elvis Presley.

The mechanical version is the largest of the three models, 42.5 mm across and 44 mm from top to bottom, with a case in stainless steel. The dial is skeletonized to suggest a microphone, providing a glimpse of the movement inside. Hamilton like the idea of opening up the dial: they make a number of “open heart” watches in which there is an aperture, usually centred on the balance, and in this piece the concept is taken further and combined with the Elvis symbolism. You get a better view of the movement through the sapphire caseback. The crown is a nice piece of design, and the stainless steel bracelet also has an interesting link structure. Water resistance is 5 bar, 50 metres. The watch is also available with a rubber strap. Price is €1,545 (1,600 Swiss francs) with bracelet, €1,495 with rubber strap. 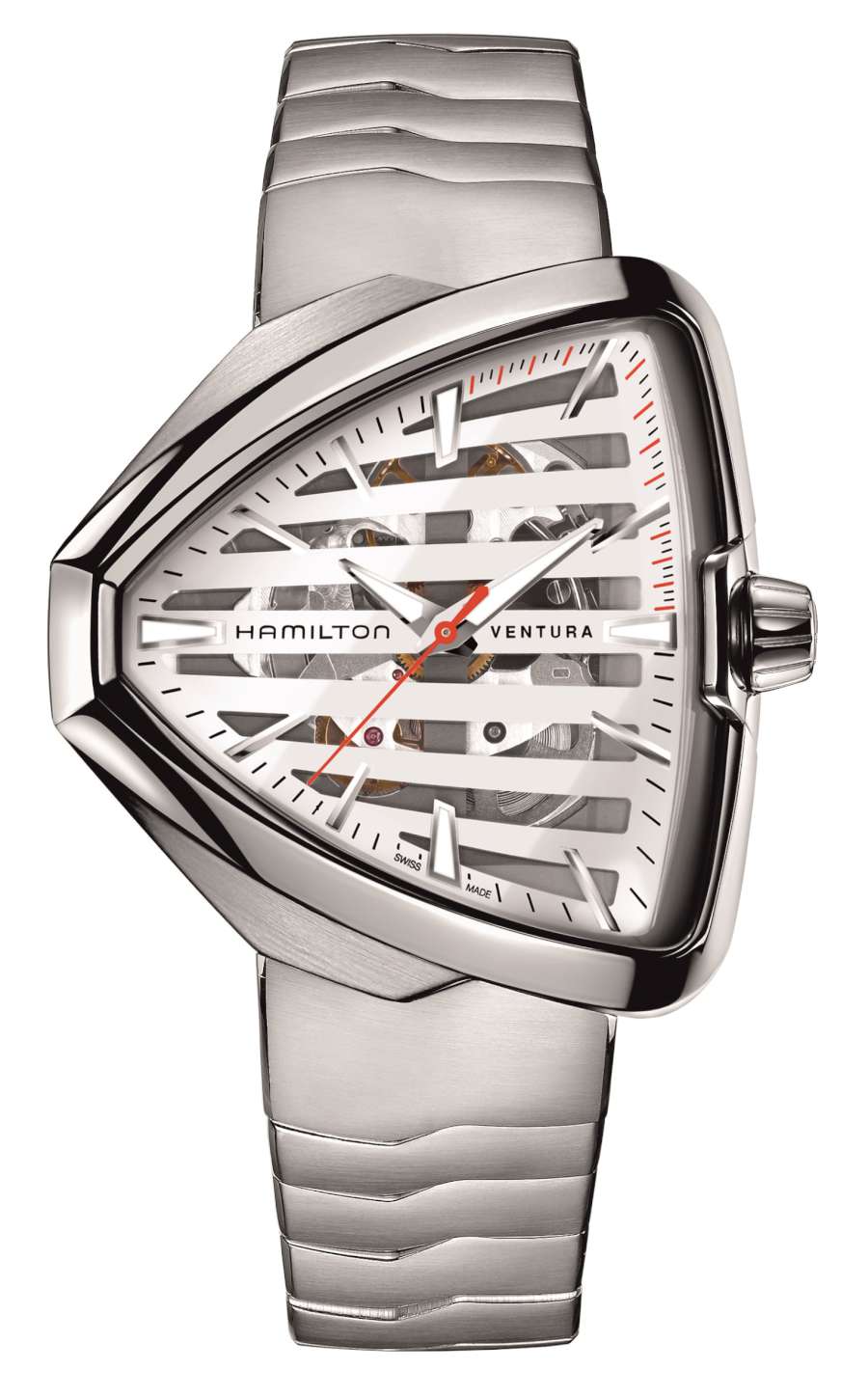 The H-10-S movement is self-winding and skeletonized, and it provides 80 hours power reserve. This is much higher that what was previously the normal power reserve for a self-winding watch, around 40 hours, and it enables the watch to stay running through the weekend if you take it off on Friday evening and put it on again on Monday morning. Swatch Group’s company ETA, who make the movement, achieved this power reserve by reducing the balance speed from 4 Hertz to 3 Hertz, by modifying the mainspring barrel, and by working on the escapement regulator. Hamilton say that “the entire kinematic chain has been refined, from the barrel to the escapement, and the escapement regulator has been suppressed, facilitating optimal reliability and precision.” So there is a free-sprung balance, and according to consumers writing on forums, precision is excellent. But the absence of the usual adjustment system probably means that the movement can’t be serviced by independent watchmakers but has to be sent to Swatch Group maintenance facilities. The H-10 is related to the Powermatic 80 used in many other Swatch Group timepieces, but the H-10 is all metal – no plastic components (unlike the Powermatic 80). Skeletonization looks to be quite minimal, with the oscillating weight featuring the open-worked spiky H logo, and a few apertures in the mainplate. 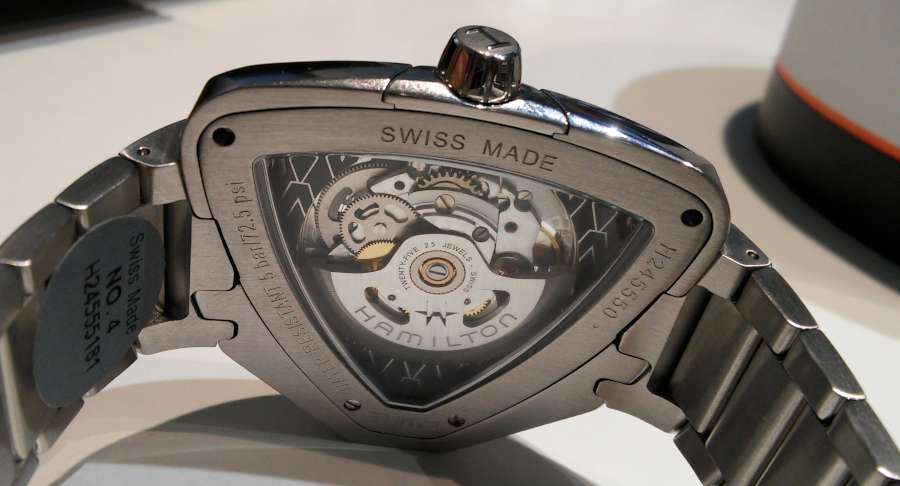 The Ventura Classic is closest to the historic original, with a stainless steel case coated in yellow gold PVD. The strap is lovely, in brown leather with a printed teju lizard pattern and a butterfly clasp. This watch comes in two sizes, 24 mm across, and 32 mm across, and it has a quartz movement. Both sizes cost €795 (895 Swiss francs). 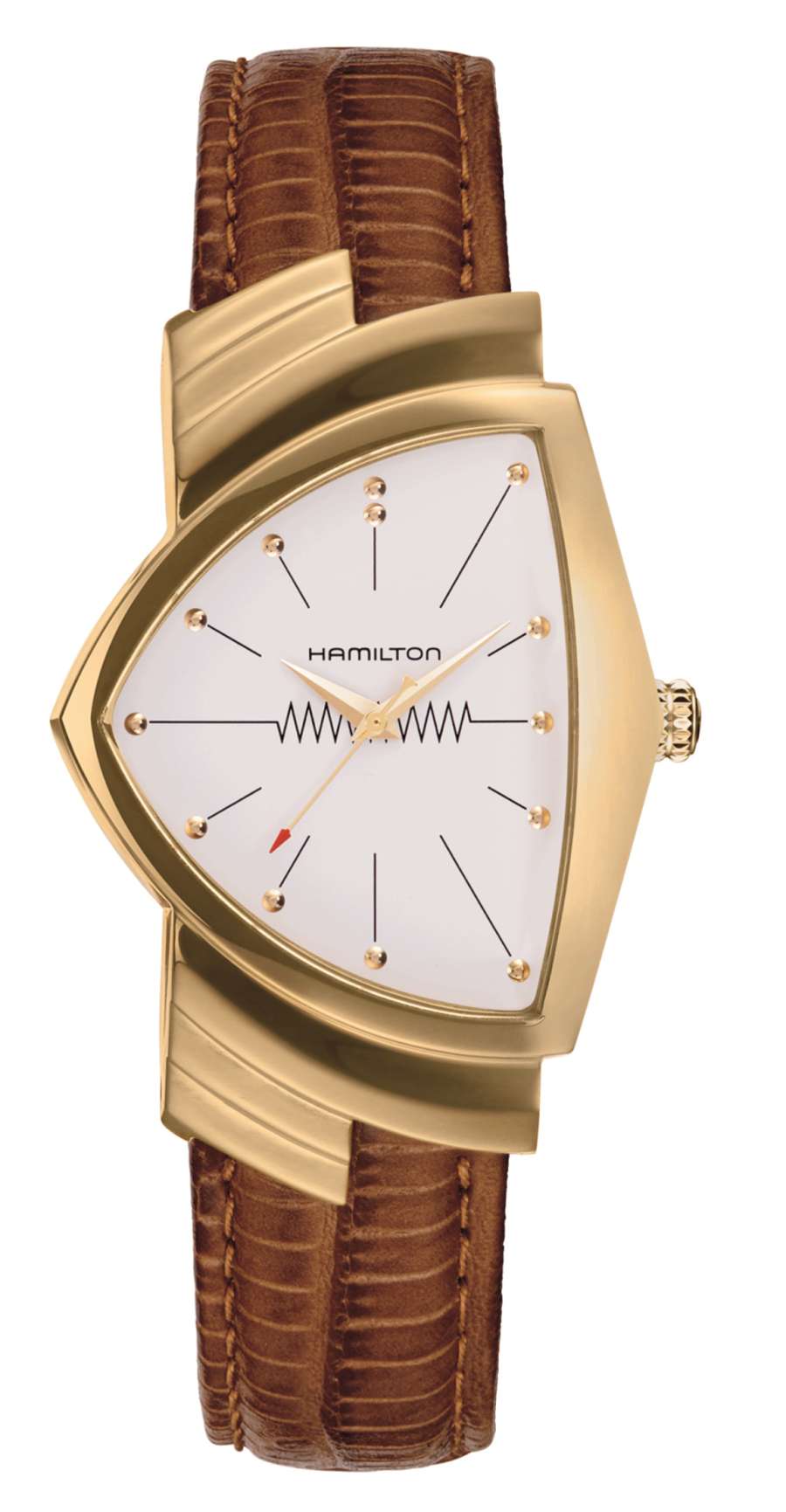 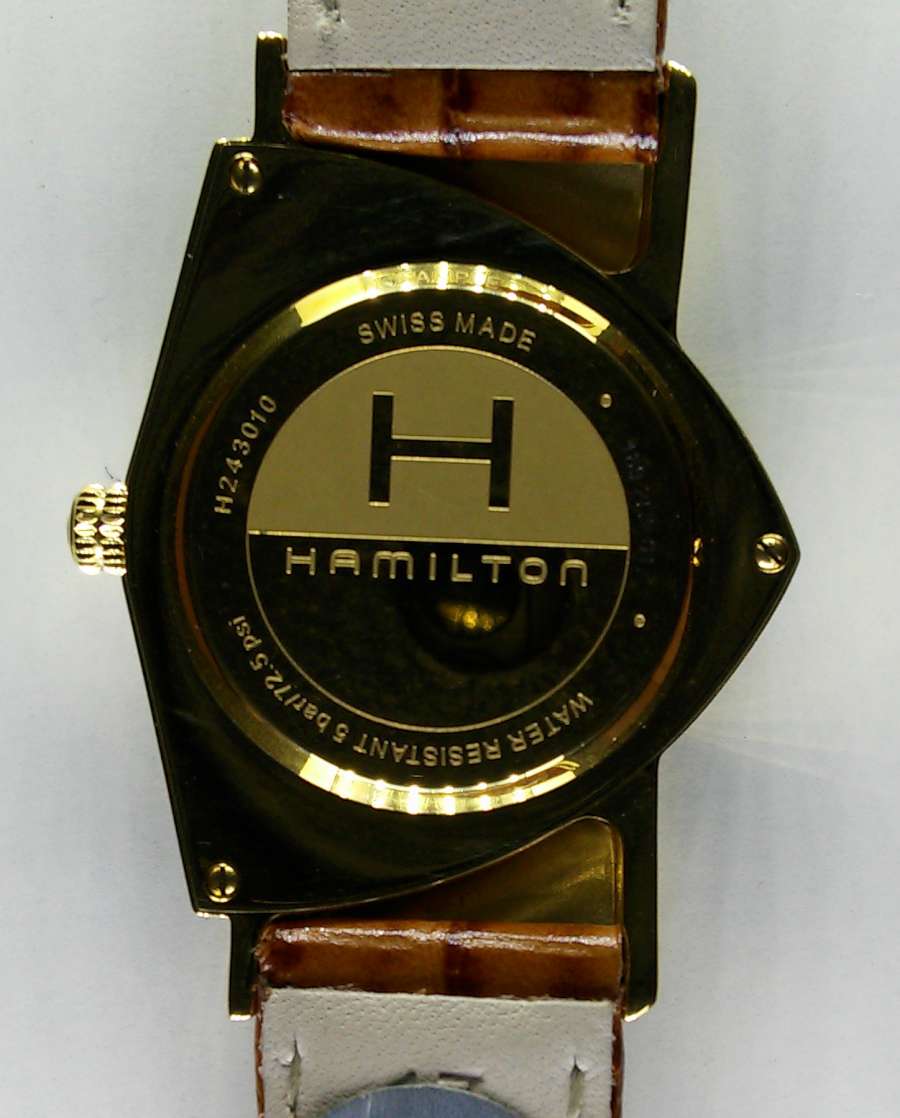 The Hamilton Ventura Classic Jeans will appeal to the new generation of consumers looking for something distinctive and trendy. The dial is 3D-printed to give it a convincing denim look matching the strap, which has a pin buckle. The watch is in two sizes, 24 and 32 mm across, and it has a quartz movement. Price €745, 875 Swiss francs. 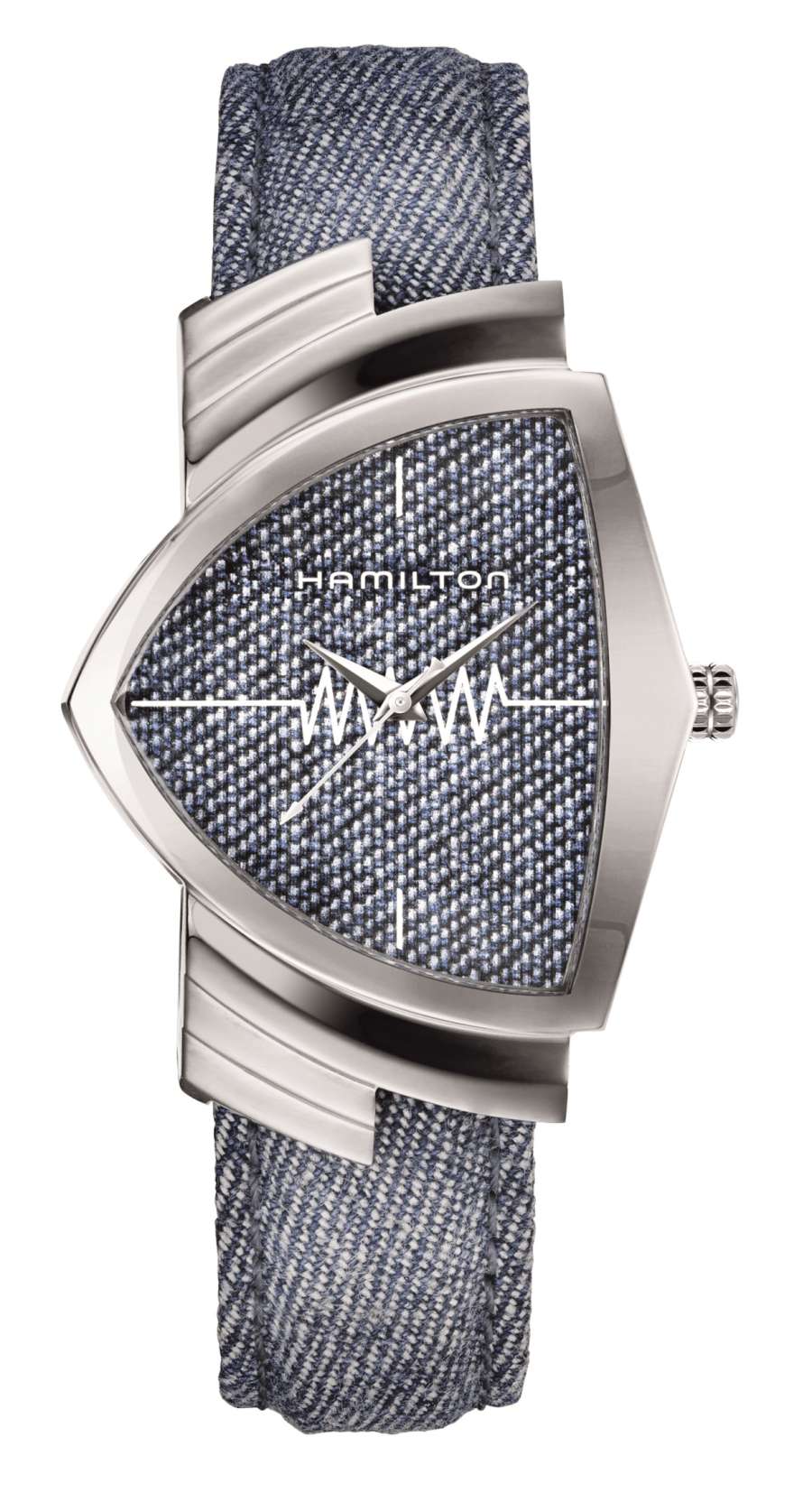 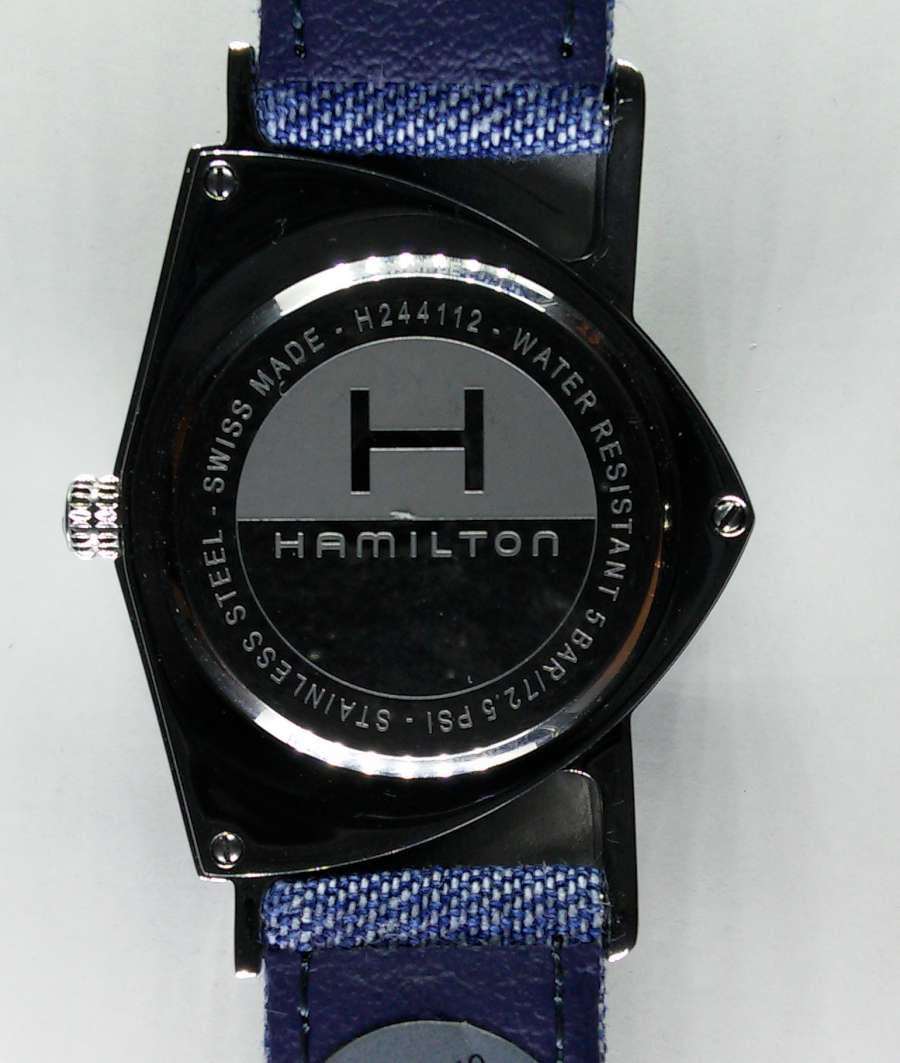 One thought on “Hamilton Ventura 2017”