Hamilton are launching a reinterpretation of a watch manufactured for the Royal Air Force in 1973. The Pilot Pioneer is a classic pilot’s watch, with vintage black textured dial, white numerals, and beige SuperLumiNova on hands and hour markers. It will be available with a NATO strap or a leather strap, at a great price: $845. 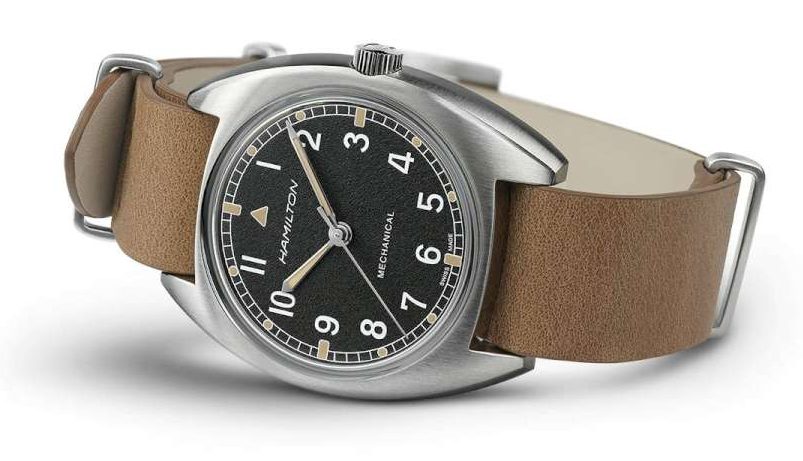 The 1973 Hamilton W10 was the last watch in the long series of mechanical timepieces made for the British Ministry of Defence. 12 brands supplied the armed forces during WWII (Buren, Cyma, Eterna, Grana, IWC, Jaeger-LeCoultre, Lemania, Longines, Omega, Record, Timor and Vertex, the so-called “Dirty Dozen”). Later there was IWC’s classic Mark 11 made for the RAF from 1949, and then, in the 1960s, the W10 supplied by Smiths, a Britiish company best known for its speedometers and other gauges for cars. But Smiths succumbed to foreign competition and the Ministry of Defence commissioned a new W10 from Hamilton.

Hamilton and the Fab Four

The watches purchased by the RAF up until the late 1960s were of premium quality with excellent movements. Reductions in military spending in the 1970s led to a change in policy with regard to watch purchases, with modifications made to the Ministry of Defence’s “DEF-STAN” (Defence Standardization) to allow the purchase of less expensive watches. This led to a number of time-only and chronograph timepieces by four companies, Hamilton, CWC, Newmark and Precista, the so-called Fab Four. 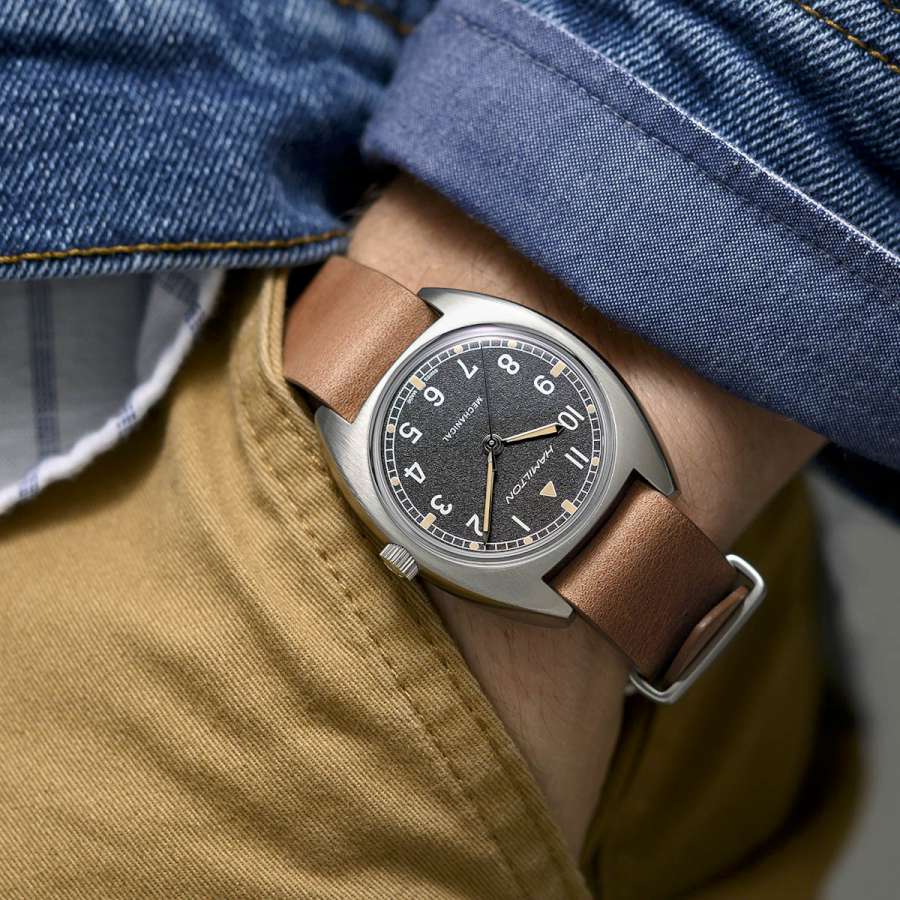 The worst years of the quartz crisis

The Hamilton W10 was apparently introduced in 1973, a period in which the quartz crisis was playing havoc with the watch industry. As far as I know, Hamilton stopped manufacturing in the United States in 1969. Production continued in Switzerland for another three years through Buren, a brand that Hamilton had purchased in 1966. Buren was liquidated in 1972, and the Hamilton brand was purchased by the holding company Société Suisse pour l’Industrie Horlogère (SSIH) in 1974. But somehow, Hamilton-branded W10 watches were supplied to the British armed forces from 1973 to 1976, as confirmed by the existence of vintage watches on the market which have the year as part of the serial number stamped on the caseback. Perhaps the watches had been made before 1973, and kept in storage until someone (such as CWC’s Ray Mellor) obtained the order from the MOD. A Google search for Hamilton W10 1973 will show you some vintage models on ebay; here is another link with photos.

The 1973 Hamilton W10 had a monocoque “front loader” case, in which the caseback is continuous with the case sides, so that the movement was dropped in from the front. It had a robust tonneau case shape. Another departure with respect to previous military models was a sword-shaped hour hand. The watch was fitted with the ETA 2750 movement, that Hamilton rebranded as their Calibre 649. It was a hand-wound movement with the stop-seconds function. The case was small in comparison with today’s watch sizes at about 35 mm width, and it had a perspex type watchglass. 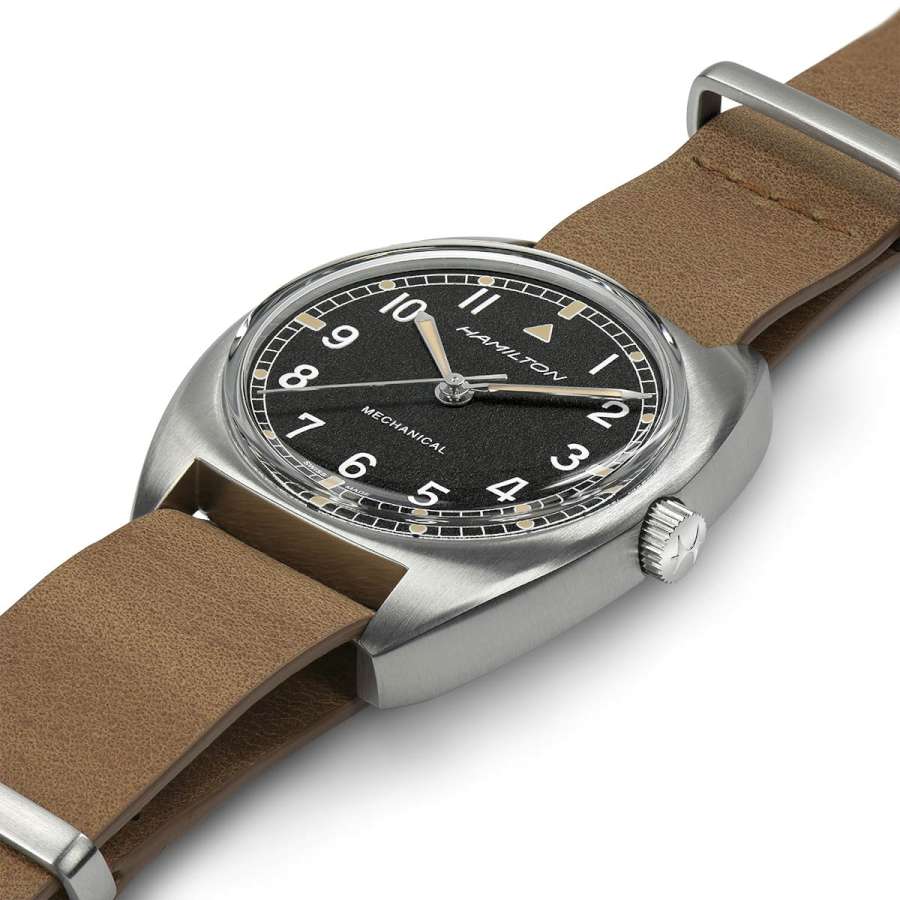 The new version is remarkably close to the original. The case is a little larger at 38 mm, with an attractive brushed finish. The dial is designed to simulate an aged black finish, so a slightly faded black. The markings include the Hamilton logo identical to that of the 1973 watch, and the texts “Mechanical” and “Swiss Made”. (The original had two other markings, the T in a circle denoting radioactive tritium luminescent paint, and the broad arrow used to denote Ministry of Defence property. Some 1970s W10s have the lettering “Genève” below the Hamilton logo).The SuperLumiNova used has a caramel colour, suggesting vintage ageing. The watch is supplied with leather or NATO strap, and of course the watchglass is no longer in Plexiglas, but in hardened mineral glass. 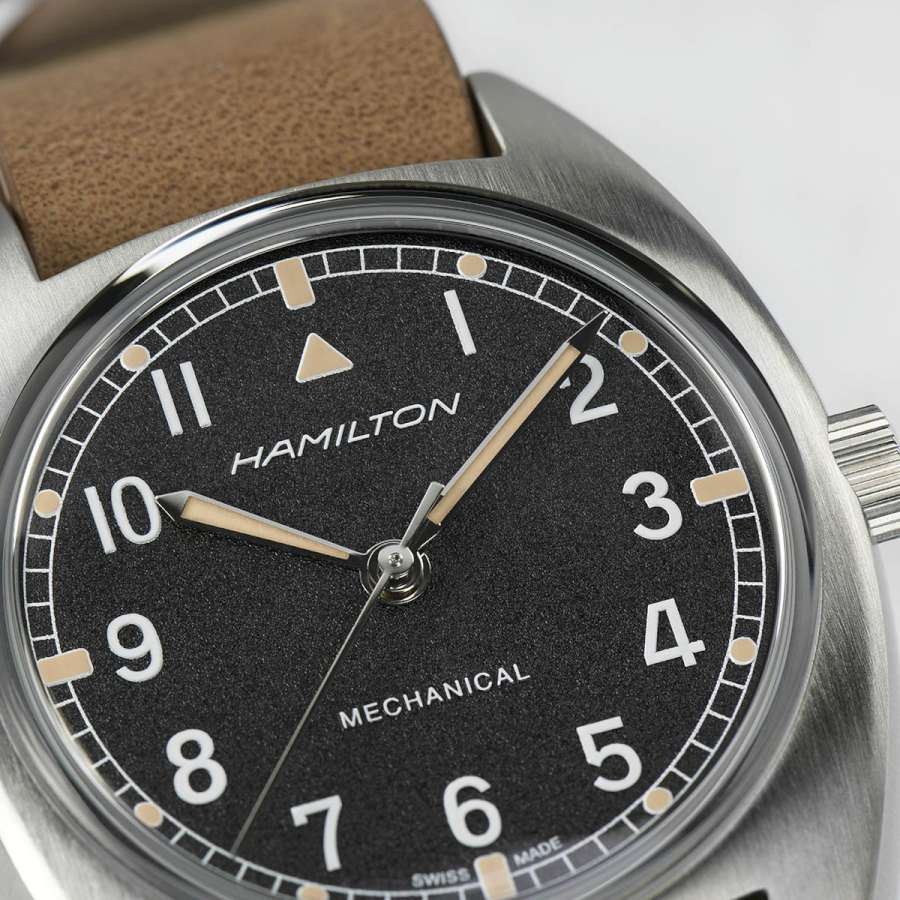 The Hamilton Pilot Pioneer is powered by the H-50 manually-wound movement providing 80 hours power reserve. This calibre appeared earlier this year, used in the Khaki Field Mechanical. It runs at 3 Hertz, 21,600 vibrations per hour. The H-50 is a movement that on other watches would be nice to see through a display caseback but in this piece Hamilton have chosen to have a solid caseback, as in the original version. The movement looks quite similar to the W10’s ETA 2750, with a largish balance wheel, and this is no surprise, because the H-50 is based on the ETA 2801, a descendant of ETA 2750. 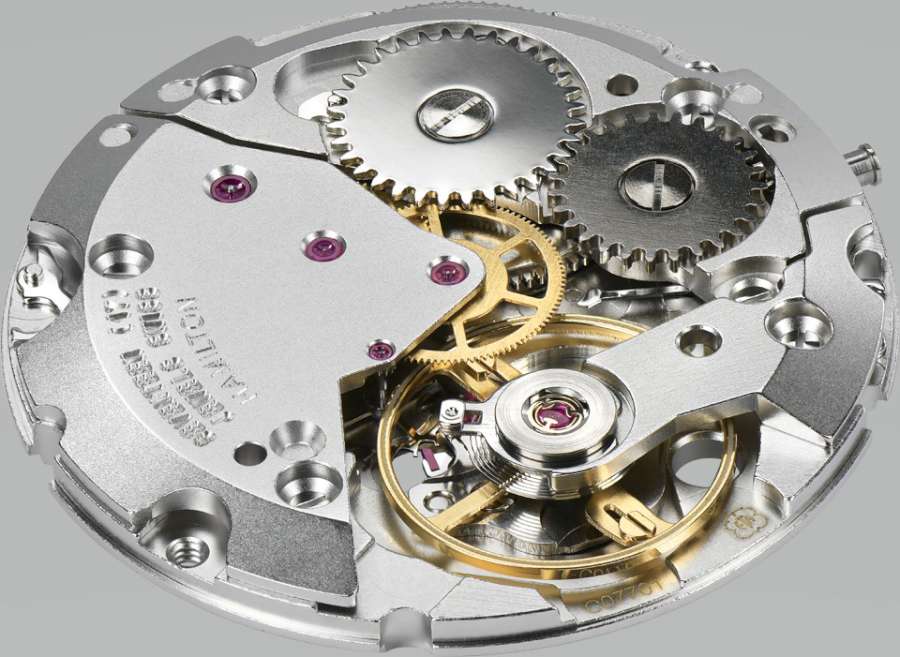 The watch is reference H76419931 and it will cost $845. An attractive price for an extremely attractive watch, a good example of Hamilton’s sensitivity to accessibility. More at https://www.hamiltonwatch.com