With the Altiplano Ultimate Automatic 910P, Piaget have decided to take back their record for the world’s thinnest automatic watch. It was theirs previously, and then in 2017 they lost it to Italian upstarts Bulgari who weighed in at 5.15 mm. The Piaget 910P does much better at just 4.3 mm thick, and it took three years of development. To underline their prowess in slimness, at SIHH 2018 they also showed a concept watch, Altiplano Ultimate Concept, the thinnest hand-wound watch in the world at 2 mm. This took four years to develop, and it is a unique piece that will never reach the market. 2 mm is an extraordinary feat of engineering.

The 910P caseback forms the mainplate

The Piaget 910P carries on from the 900P presented in 2014, at that time the thinnest manually-wound watch in the world at 3.65 mm. Just as for that watch, the fundamental characteristic of the watch is the fact that the caseback forms the mainplate, intricately machined to create a support for the 219 components. In addition, the movement construction is reversed, with the going train on the dial side, visible through the watchglass of the 41mm case. It’s an interesting sight, in terms of appearance, with even more wheels visible than in the 900P, the movement providing a complex frame contrasting with the dial that recalls the sleek simplicity of the original Altiplano. The crown of course looks very small. 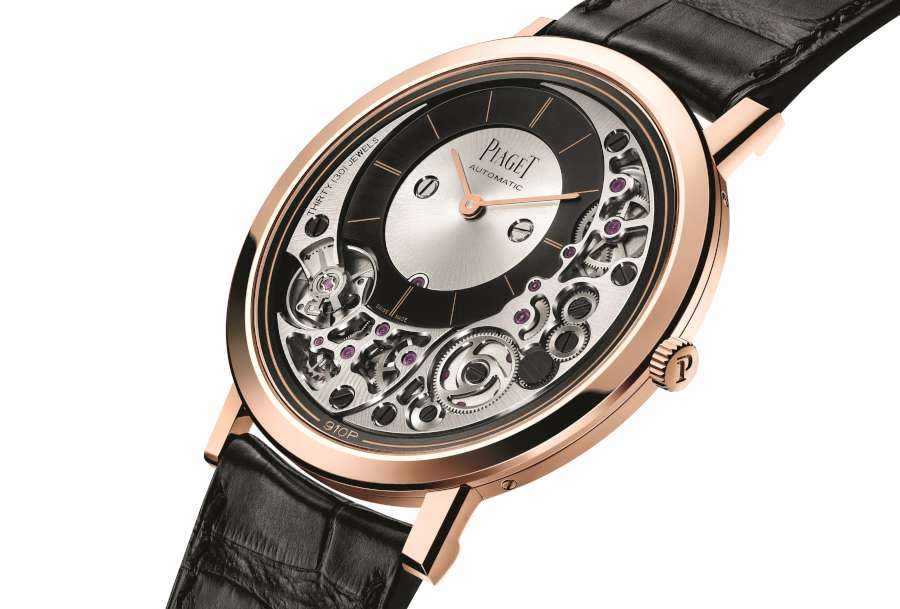 Dial on the left

The designers opted to place the dial eccentrically, towards the left. This is no great problem in terms of legibility, but it does mean that it will be covered by the cuff more often than if it had been placed on the right. I imagine that the engineering necessities regarding the crown led to this arrangement. Perhaps it would have been necessary to place the crown on the left to have the subdial on the right. 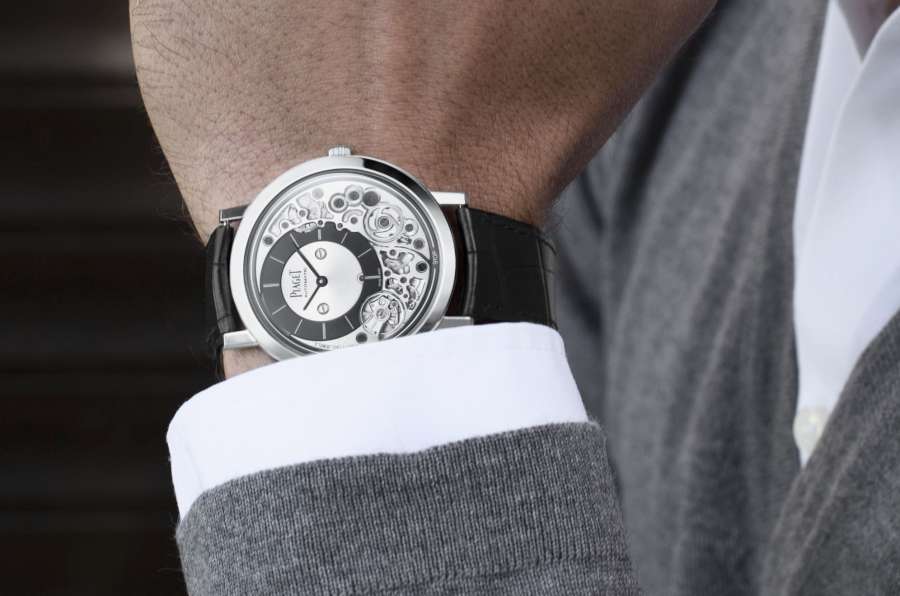 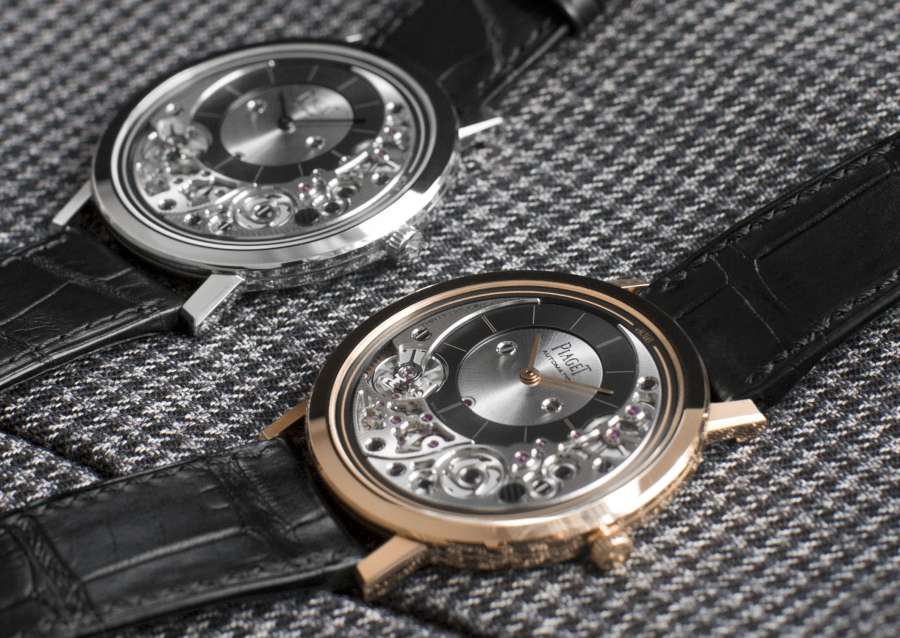 The Piaget Altiplano Ultimate Concept is not designed for production because of the cost of the materials used. The case is in an ultra-rigid cobalt alloy, and some of the wheels reach a thinness of 0.12 mm, but even more remarkable is the watchglass, just 0.2 mm thick (most watchglasses are 1 mm thick). A 2mm crown would be extremely difficult to use, and so the designers adopted a system analogous to Cartier’s crown in Drive, a flat crown incorporated into the caseband. It is selective, so that you can choose whether to wind the watch or set the time. The balance has been inverted with respect to normal watches, with balance spring above the balance wheel. The barrel at 6 o’clock has no cover and no drum: the mainspring is attached directly to the caseback/mainplate, with energy transmitted from the centre of the barrel. It provides 44 hours power reserve. The concept watch embodies five patents, and even the strap and buckle have been specially designed for ultra-thinness. Even though the watch won’t be put on the market, it’s not difficult to predict that its features and patents will be incorporated into other complications that will increase the number of world records held by Piaget. Come on Bulgari, now it’s your turn. 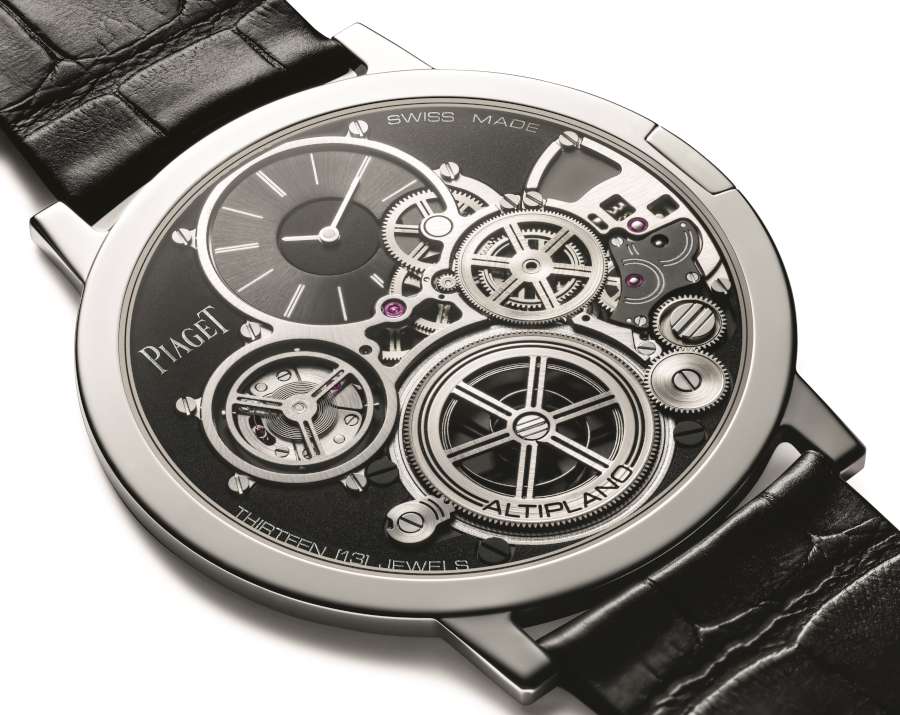