It’s one of the world’s iconic shape watches, dating back to 1969. Now TAG Heuer have launched a new edition of the Monaco Chronograph, co-branded Gulf, with the colours and logo of this oil brand. 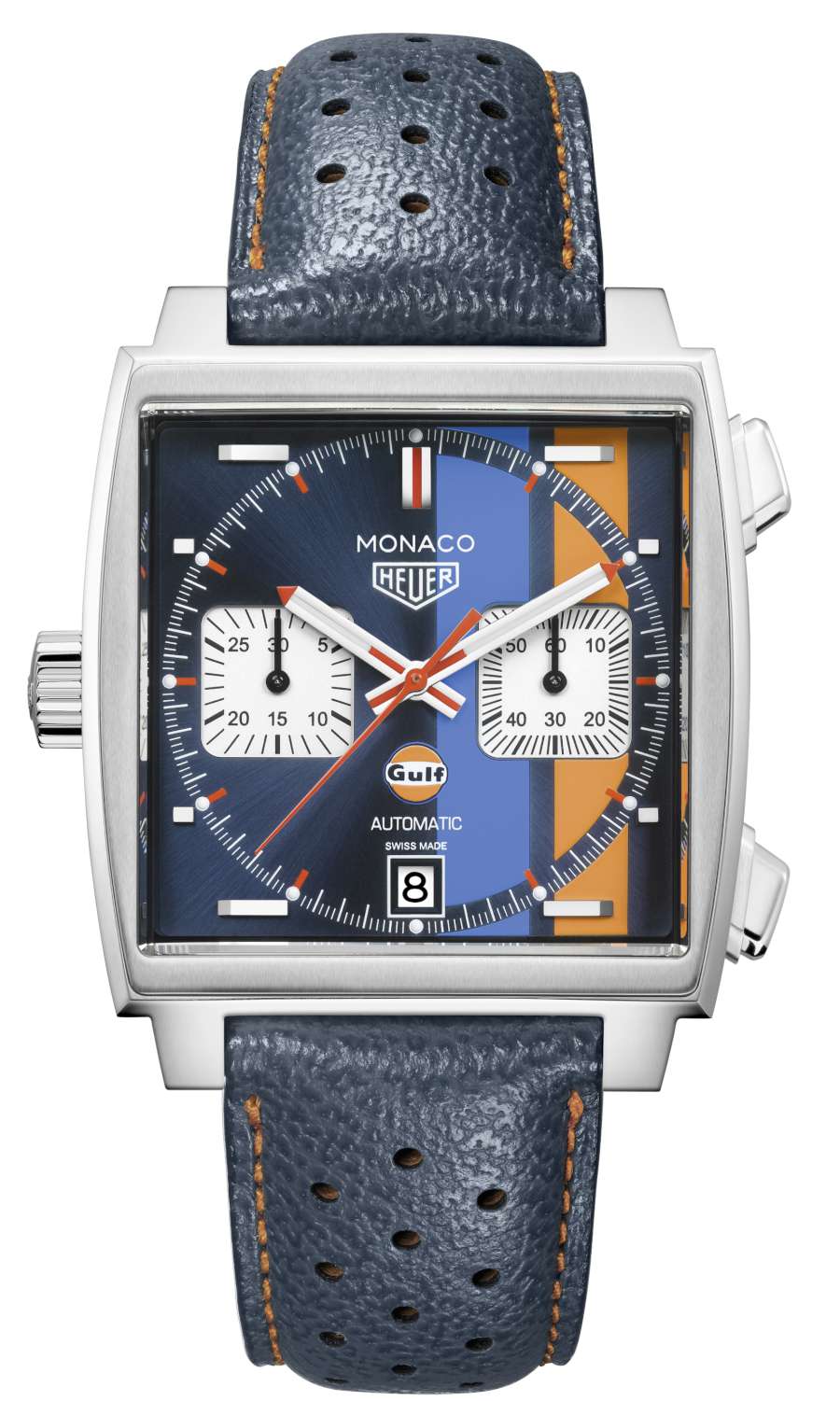 The race for the first automatic chronograph

Back in 1969, there were three contenders for the title of first automatic chronograph: the Zenith El Primero, the Seiko 6139, and the Heuer Monaco. The 1960s was the decade of the Space Race, which also concluded in 1969 with the Apollo 11 mission landing on the moon on 20 July. There were already automatic watches, and chronograph watches, but until then no one had created a self-winding chronograph. Zenith started working on an automatic chronograph in 1962. Seiko had introduced its first 60 second chronograph in 1964. Charles-Edouard Heuer, President of Ed. Heuer & Co., started thinking about an automatic chronograph in the late 1950s, using the micro rotor concept developed by Buren. The idea for the new Heuer watch was a movement with a base calibre by Buren, about 3.2 mm thick, with a chronograph model designed by Dubois-Depraz on top. To help finance the operation, Jack Heuer asked Willy Breitling if he would be interested in entering a partnership. Buren was purchased by Hamilton in 1966 and so in theory the complete team was Heuer, Buren, Dubois-Depraz and Hamilton, but the latter company was not really interested in chronographs at that time and so this was not a problem in terms of competition. 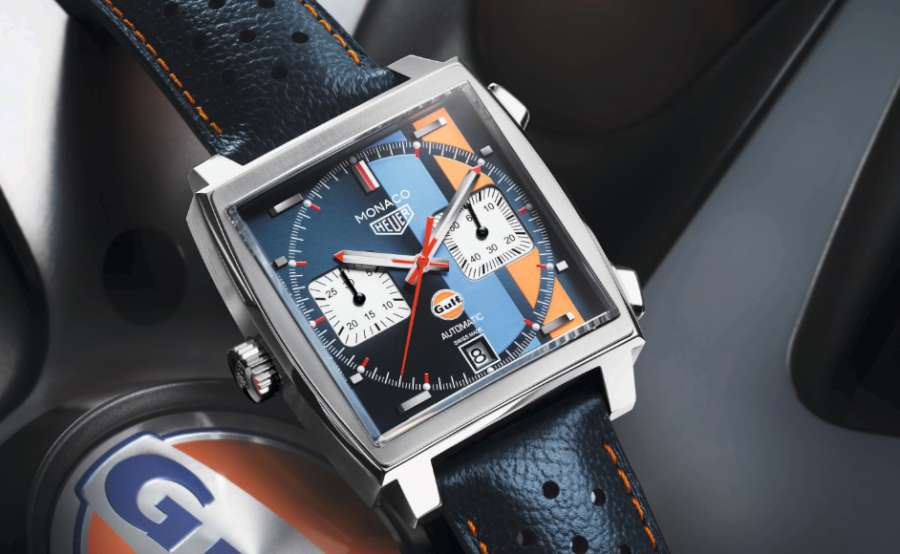 The Monaco was the first automatic chronograph on the market

Who won? Zenith were the first to announce their automatic chronograph, on 10 January 1969, but they only had a few complete pieces and it was not yet ready for the market. The first Zenith with the revolutionary El Primero high-speed movement became available for purchase only in October 1969. The announcement by the Heuer, Buren, Dubois-Depraz and Hamilton partnership took place on 3 March 1969, and a number of different chronograph designs by Heuer, Breitling and Hamilton containing the calibre 11 movement were presented at the Basel fair in April 1969. So they were the first to reach the market. Seiko introduced its calibre 6139 automatic chronograph in May 1969, but this was restricted to the Japanese market only. It has to be said that the El Primero movement was far more advanced, an integrated chronograph movement running at high frequency, 36,000 vibrations per hour, with quick set date. It is ironic that all this competition between watch brands would soon pale into insignificance, swept away by the tidal wave of cheap quartz watches from Asia that would flood the watch market during the 1970s. 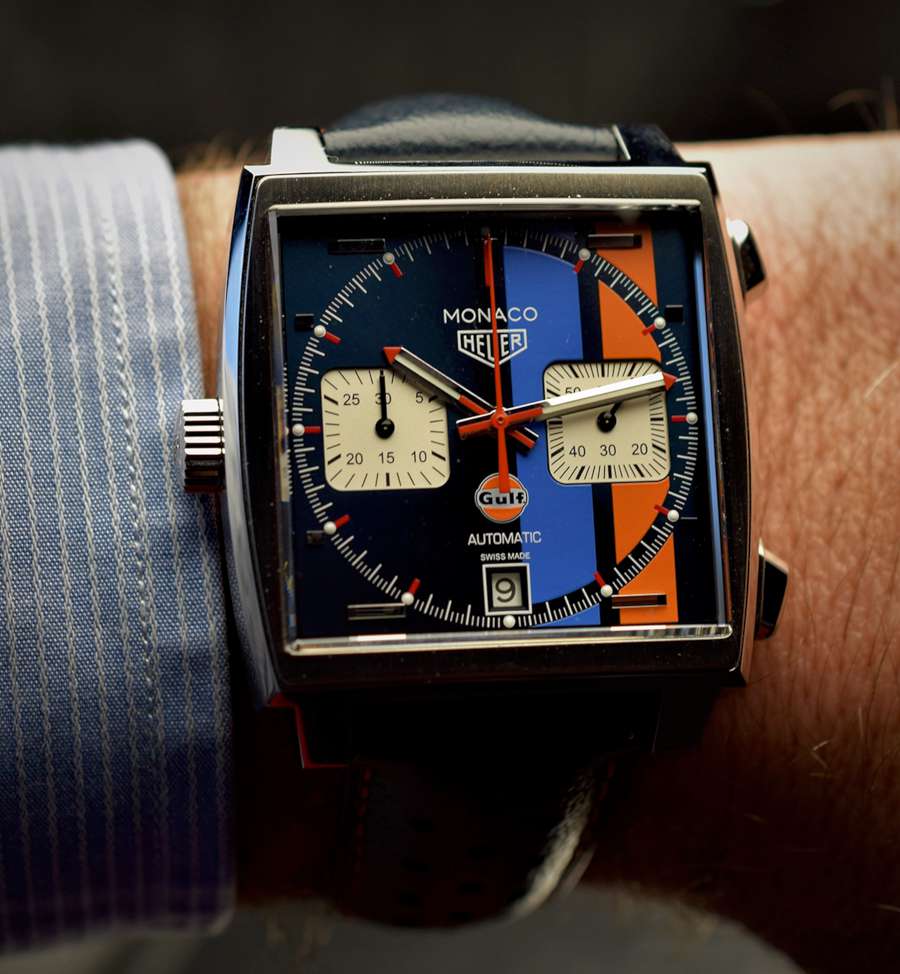 The square Monaco was brought to worldwide fame by Steve McQueen who wore it in the 1971 film LeMans. In 1968, Jack Heuer had signed a publicity deal with racing driver Jo Siffert, who wore the Heuer emblem on his race overalls and a Heuer chronograph on his wrist. For the film, Jo Siffert was hired as a stunt driver, he and Steve McQueen became friends, and so McQueen decided to choose a costume based on Siffert’s appearance. In actual fact the Monaco was not an automotive chronograph (Heuer was already making the Autavia which was closer to the automotive feel), and it seems that McQueen was assigned it just because the film’s prop master had three Monaco watches which simplified matters for production. 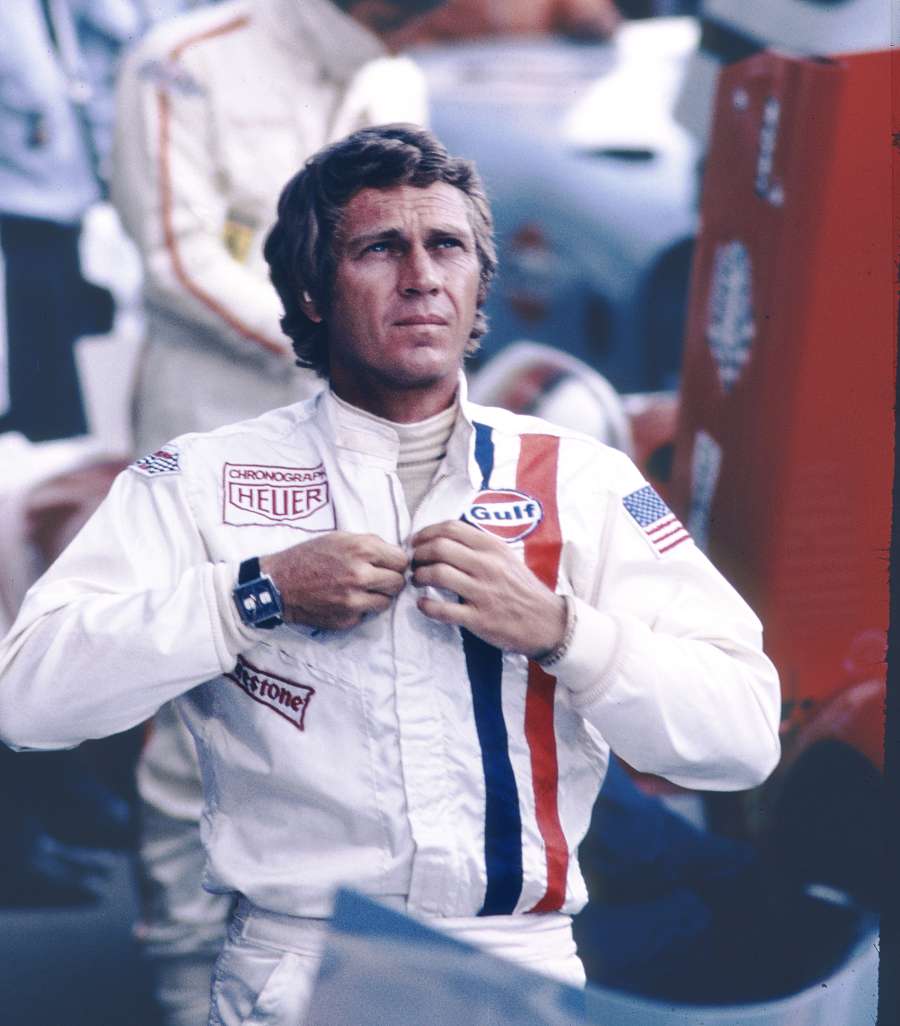 A new partnership with Gulf Oil

The TAG Heuer Monaco Gulf 2018 Special Edition is the result of a new partnership between TAG Heuer and Gulf Oil International, the same company that sponsored McQueen in the film Le Mans, with its logo appearing on his overalls and on the Gulf-Porsche 917K car. The overall design is the same as the original Monaco, with its trademark large square case, 39 mm by 39 mm, 14 mm thick, and square subdials. The square case was originally offered to Heuer by case manufacturer Piquerez. In addition to its shape, it had a higher than usual water resistance. The position of the crown, on the left, was originally intended as a way of demonstrating that this was an automatic chronograph. The overall design reflects another invention that symbolised modernity back in the late 1960s: the television. 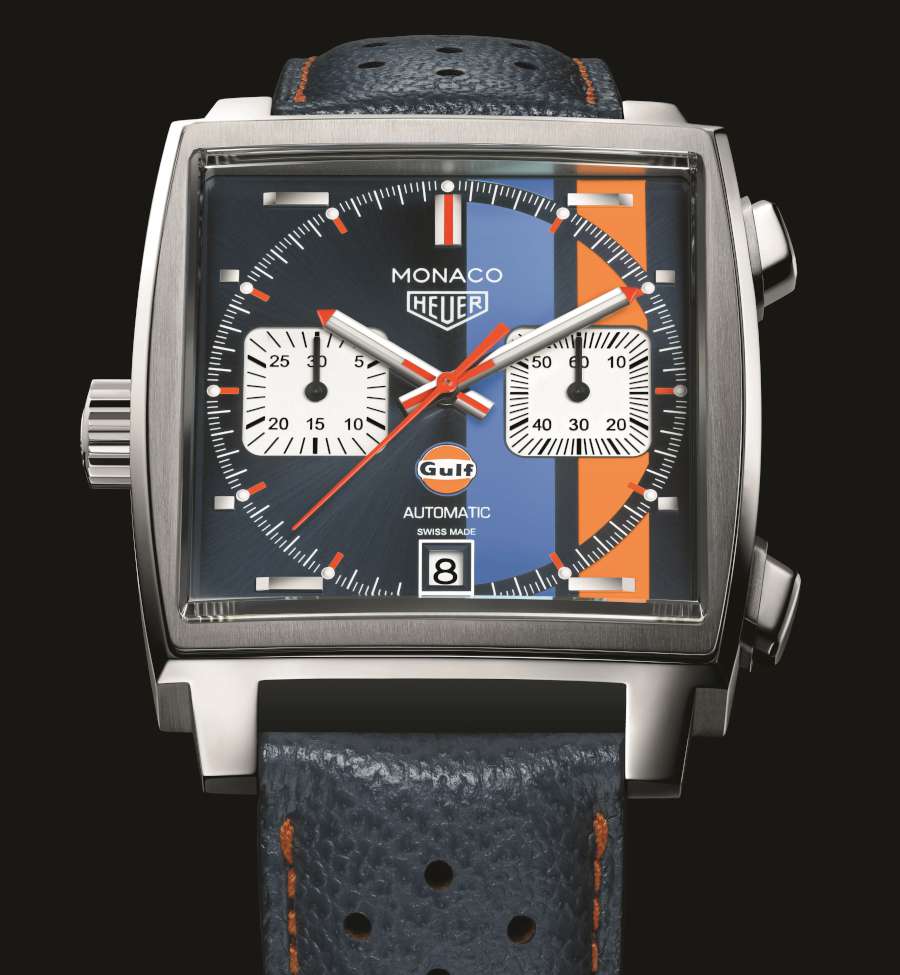 The TAG Heuer Monaco Gulf 2018 Special Edition has a dial that is distinctive for the blue and orange Gulf Oil stripes, the horizontal hour indices and the date window at 6 o’clock. It is slightly different from the 1969 original, because the two subdials are for continuous seconds at 3 o’clock and 30 chronograph minutes at 9 o’clock. The original had 30-minute and 12-hour counters and no continuous seconds. Water resistance is 100 metres, and the watch has a sapphire watch glass. The strap is in blue leather with orange stitching and racing type perforations. 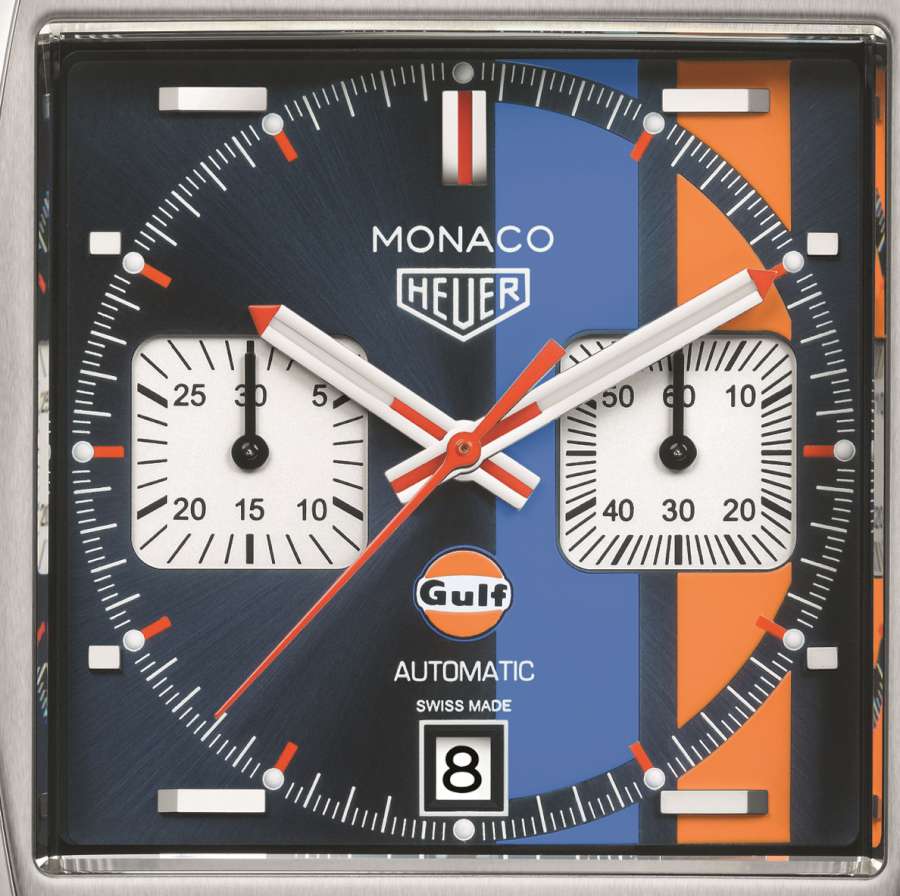 A new version of the Calibre 11

There is a circular window in the caseback but you can’t see much of the calibre 11 movement except for the oscillating weight. It’s difficult to say what exactly is inside: the calibre 11 in this new watch probably has a base movement by ETA or Sellita and a chronograph module by Dubois-Depraz. 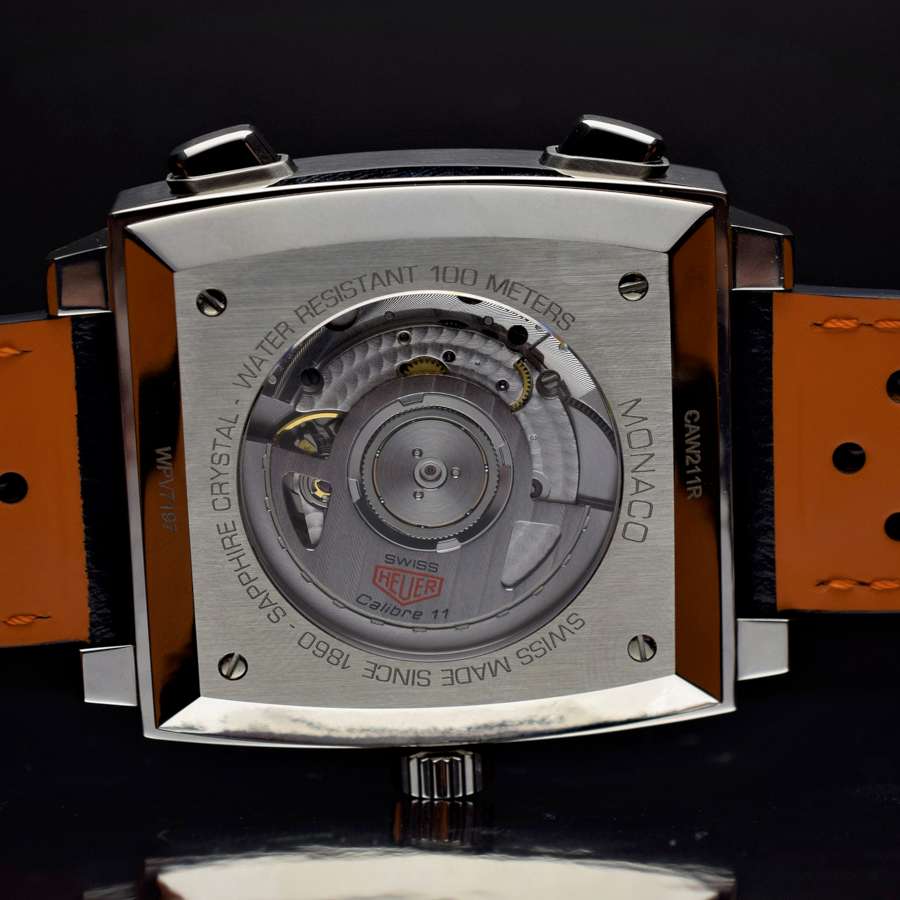 The TAG Heuer Monaco Gulf 2018 Special Edition is reference CAW211R.FC6401, and it costs €5,250. if you would like to prefer something without the Gulf Oil logo, other versions of the original are still available in the TAG Heuer collection at prices starting from €4,900 (as in the piece below). Further information from the TAG Heuer website. 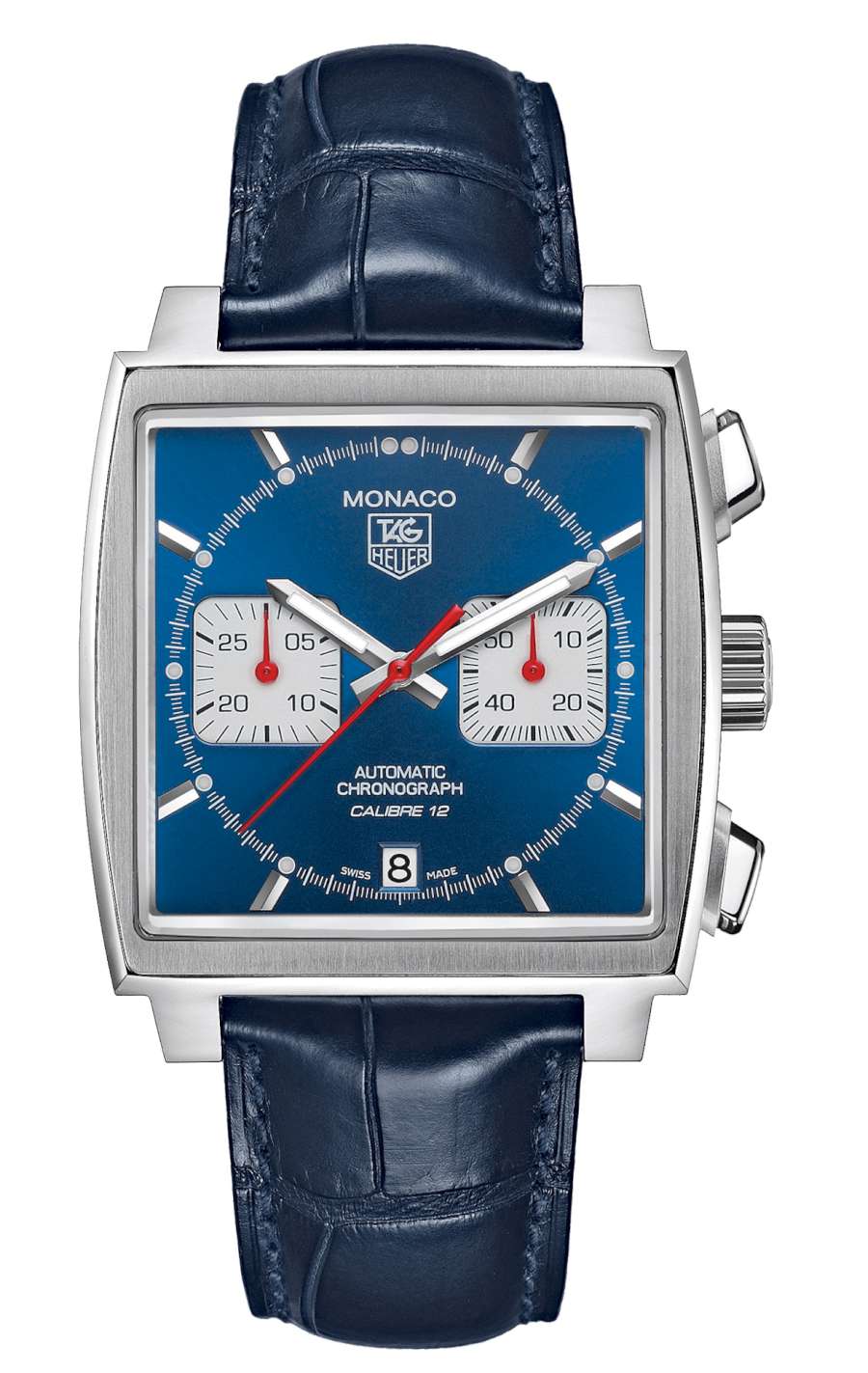