Graham sponsor the Swiss Gurnigel Bergrennen hill race. It took place on 9-10 September 2017, with 200 cars and 50 motorbikes that drive up a 3.7 km course uphill, from the Bernese village of Dürrbach up to Gurnigelbad, a vertical distance of 314 metres at an average gradients of 8.4%, with maximum slope of 12.6%. The brand is present at several motor sports events, such as the TT races on the Isle of Man. The company founder Eric Loth has a passion for cars and himself takes part in the hill climb event. I guess that the brand would sponsor something higher-profile, but motor racing on circuits has been banned in Switzerland since 1958 (following the Le Mans accident in 1955 when a car crashed into the crowd during the Le Mans 24 Hours). The only races that can take place are things like hillclimbs in which the cars are not competing directly one against another. 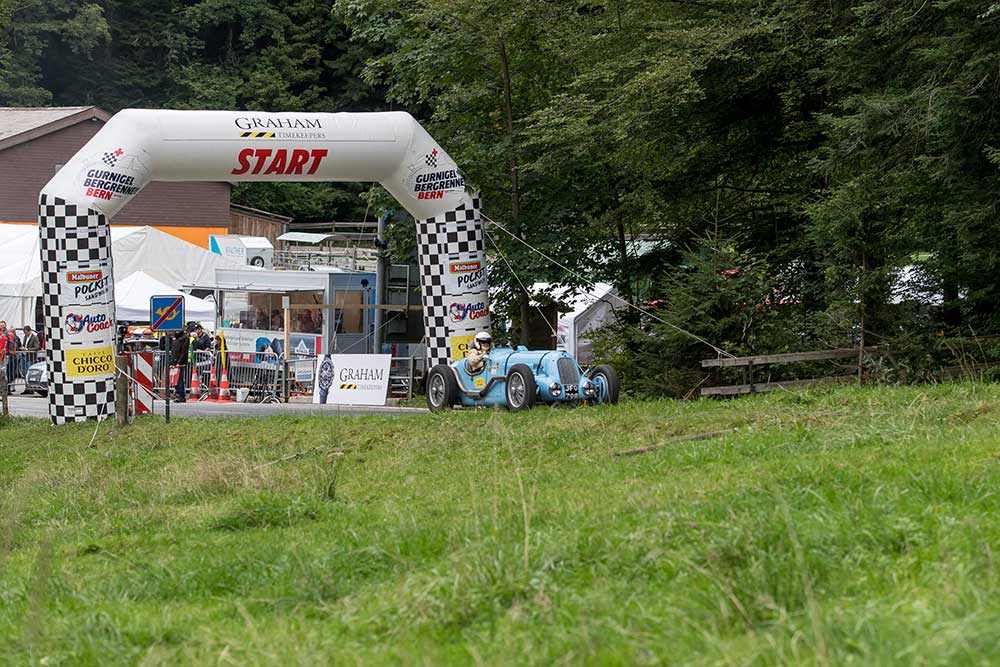 The Graham Silverstone RS GMT is a flyback chronograph presented on occasion of the 2017 Gurnigel Bergrennen race. It combines the tough, military looks that hallmarks a lot of Graham’s products with two attractive strap options, white rubber with tyre track decoration, or a lovely quilted leather strap, whose colour is a perfect match for the beige SuperLuminova used on the hands and hour markers. It’s a large watch, with a 46 mm steel case, water resistant to 10 bar, 100 metres. The lugs are nicely faceted with brushed surfaces. The dial is semi-skeletonized, with a black-tinted sapphire crystal providing a view of parts of the movement. The big date display is operated by two discs. There are two subdials for continuous seconds and 30 chronograph minutes, and two scales at the edge of the dial, seconds, and tachymeter. A large triangular-tipped hand shows a second time zone on a 24-hour scale on the bezel. The photos don’t show the caseband, but it has a red aluminium ring with Clous de Paris decoration, just below the bezel. 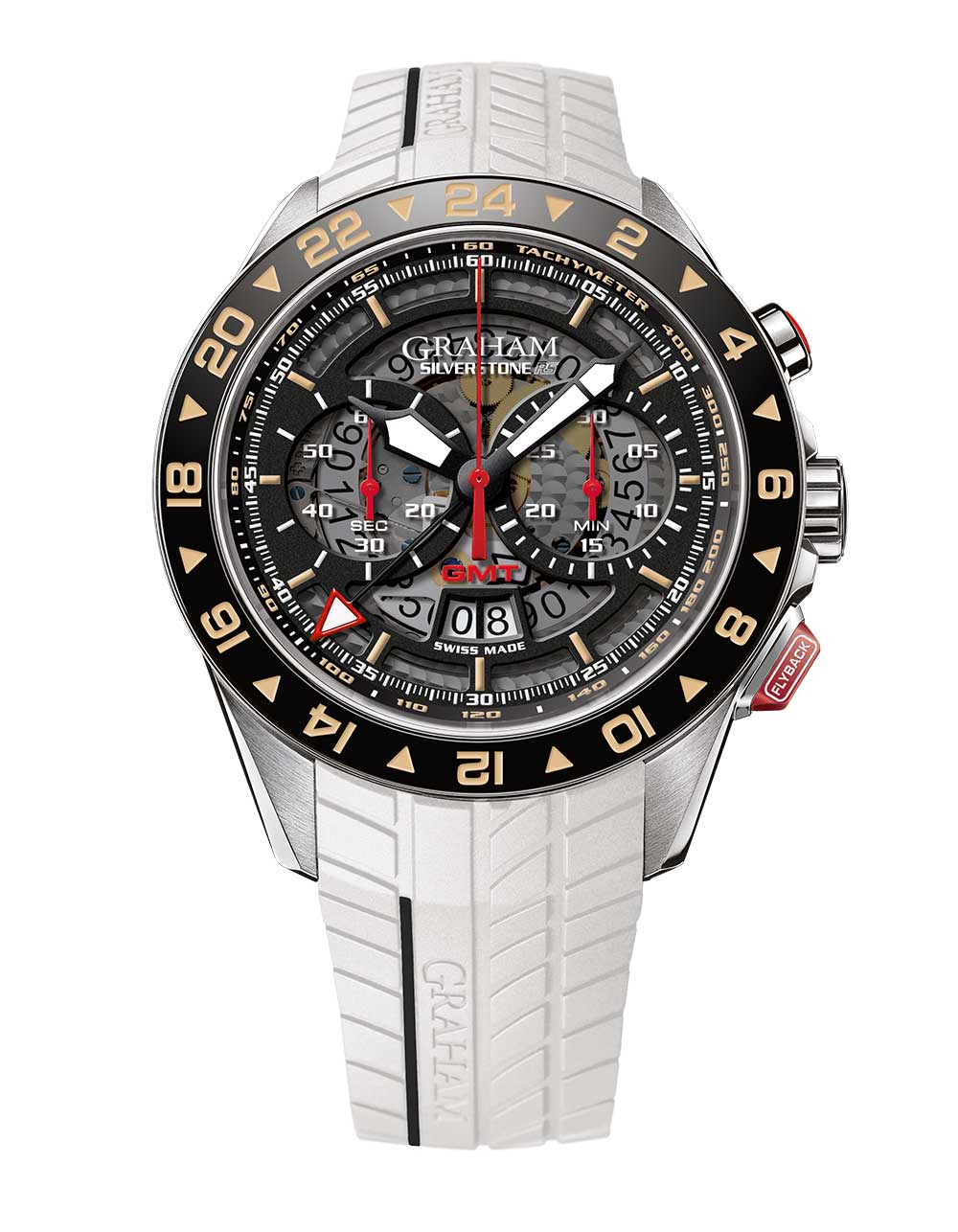 The two chronograph pushers are trimmed in red, and the pusher at 4 o’clock operates the flyback function. The crown can be used to set the second time zone hand in one-hour steps. 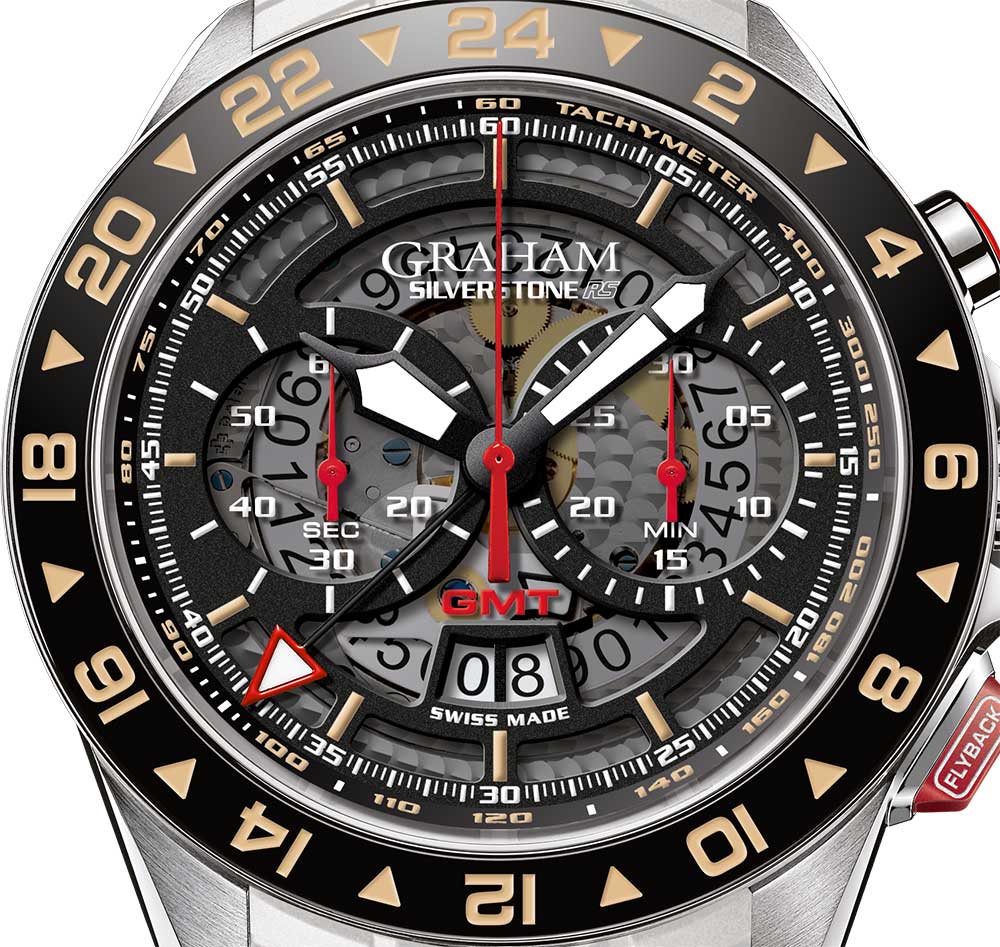 The Graham Silverstone RS GMT is powered by the G1721 movement, a self-winding chronograph calibre running at 28,800 vibrations per hour, 4 Hertz, with a 48-hour power reserve. It is visible through the caseback, with decoration. It is made exclusively for Graham, probably based on the Valjoux 7750. The oscillating weight has ceramic ball bearings to reduce friction. 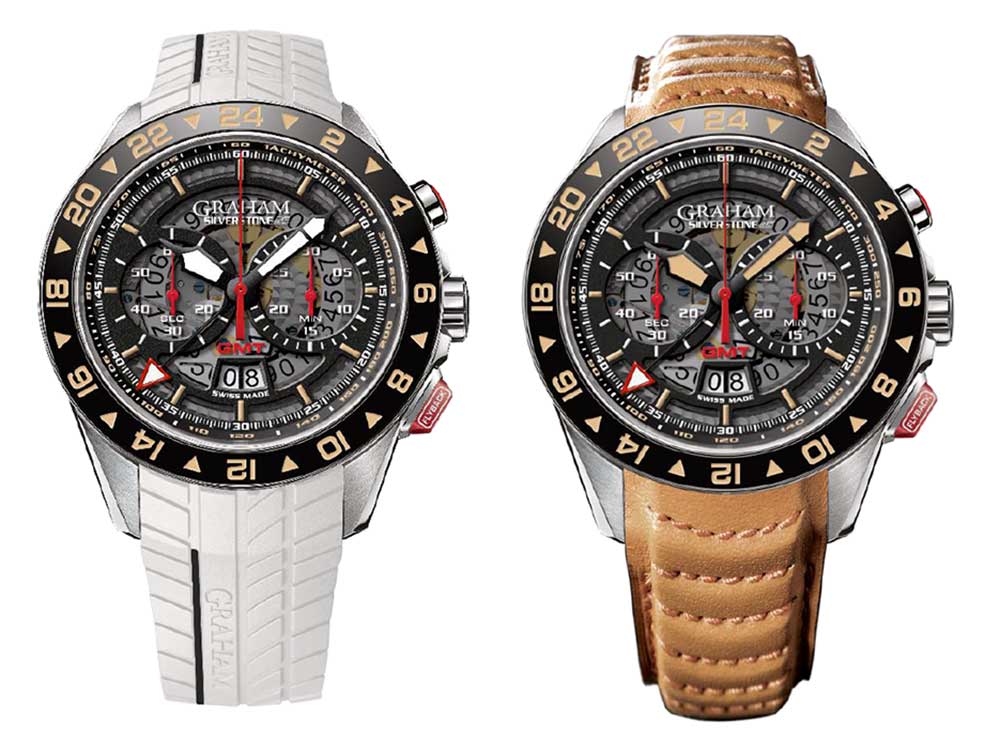 There are two references of the Silverstone RS GMT, 2STDC.B08B, with the white tyre-tread rubber strap, and 2STDC.B08A, which has the beige quilted leather strap that is so distinctive. Both watches are limited editions of 250 pieces, price €8,760, £6.480. Further information from the Graham company website.