Mechanical watches are interesting products but their desirability is often reduced by their characteristics. First, they are usually expensive. Second, their engineering is usually invisible to the owner, with all the mechanism hidden inside the case. This is where a mens skeleton watch has an advantage: by removing the dial and reducing the bridges and mainplates to a series of struts, you can bring the entire movement into view. When performed by hand, skeletonization is an expensive. procedure. The Xiaomi CIGA Design watch could be the product that puts Chinese watchmaking onto a plane of global interest and acceptability. 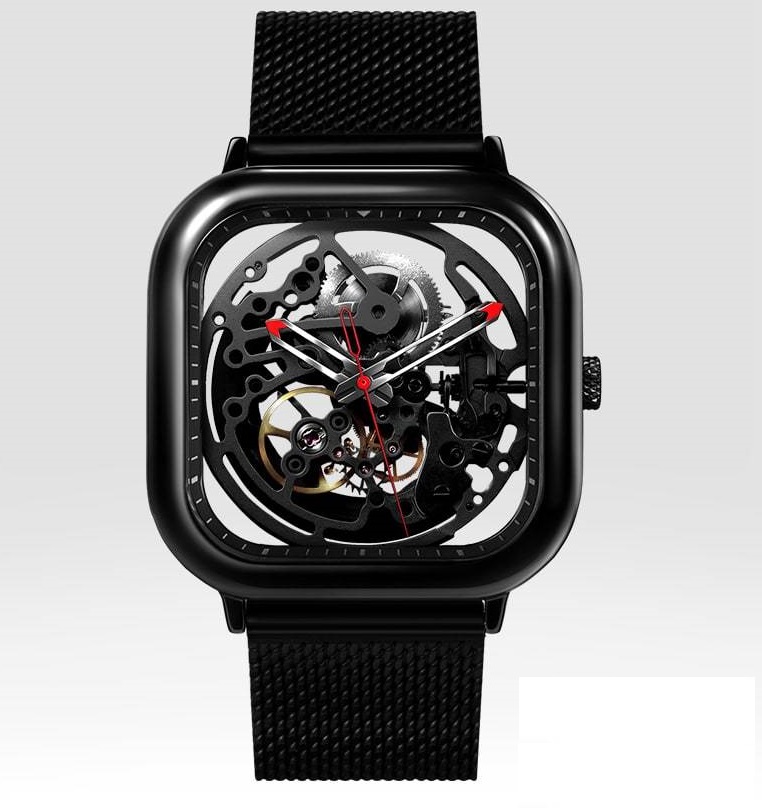 The Xiaomi CIGA Design watch follows on from the T-Series, which had a circular case and a movement with 94 components. The CIGA Design Full Hollow automatic skeleton watch – which won the RedDot design award in 2017, and the German Design Award in 2019 – has a different aesthetic, with the same circular movement in a square case. This gives it a superficial resemblance to the Apple Smartwatch, with its rounded edges and overall black colour. Its complete name is “CIGA Design Skeleton Mechanical Watch Full Hollow” in which the “hollow” refers to the skeletonization. 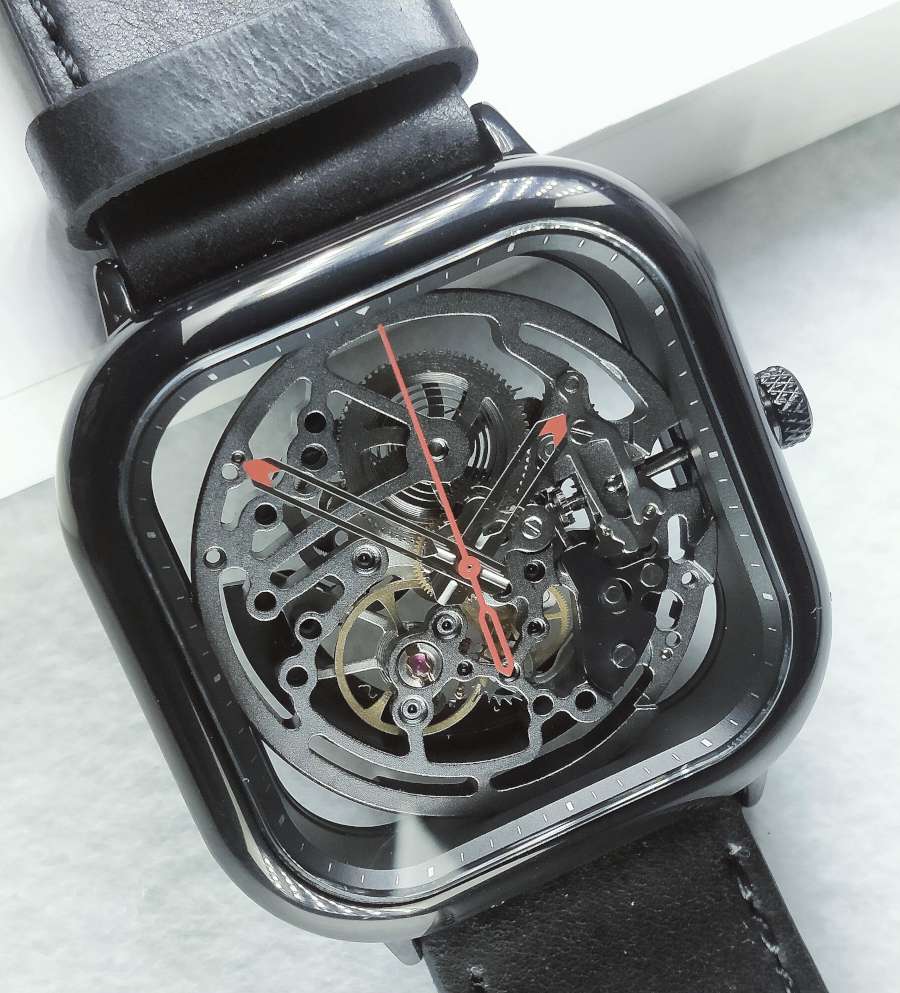 The CIGA Design Full Hollow is a square skeleton watch, with a 40 mm case, 11.4 mm thick, made in stainless steel with a sapphire watchglass and a mineral glass caseback. Water resistance is the standard 3 atm, 30 metres. The CIGA design watch weighs 118 grams with stainless steel milanaise bracelet, or 73 grams with the leather strap. According to the product specifications, finishing processes include 18 manual polishing steps, and the skeletonized hands have their red tip coating applied by hand. 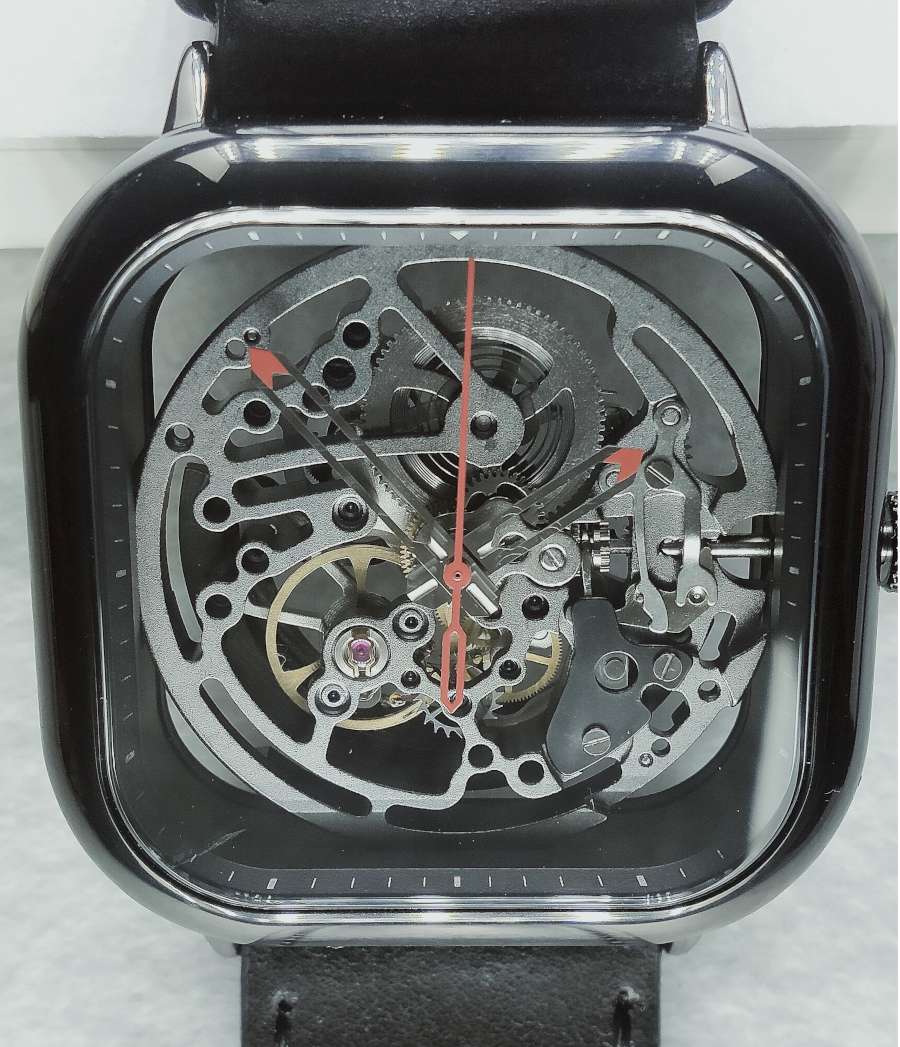 The CIGA Design watch is supplied in an attractive book-like package, containing the watch itself, the two straps, and a tool for changing the straps. In actual fact, the tool is a generous extra, but it is not really necessary for this particular watch because the strap and bracelet both have springbars with a small projecting lug (visible in the photo below), so you can change the strap quickly and easily using your fingernail. The milanaise strap has the same black finish as the watch, It can be adjusted by using a small screwdriver to flick up the lever on the clasp, sliding the clasp along the bracelet and ensuring that the lever is depressed in one of the shallow grooves running across the bracelet. The watch is very comfortable on the wrist. 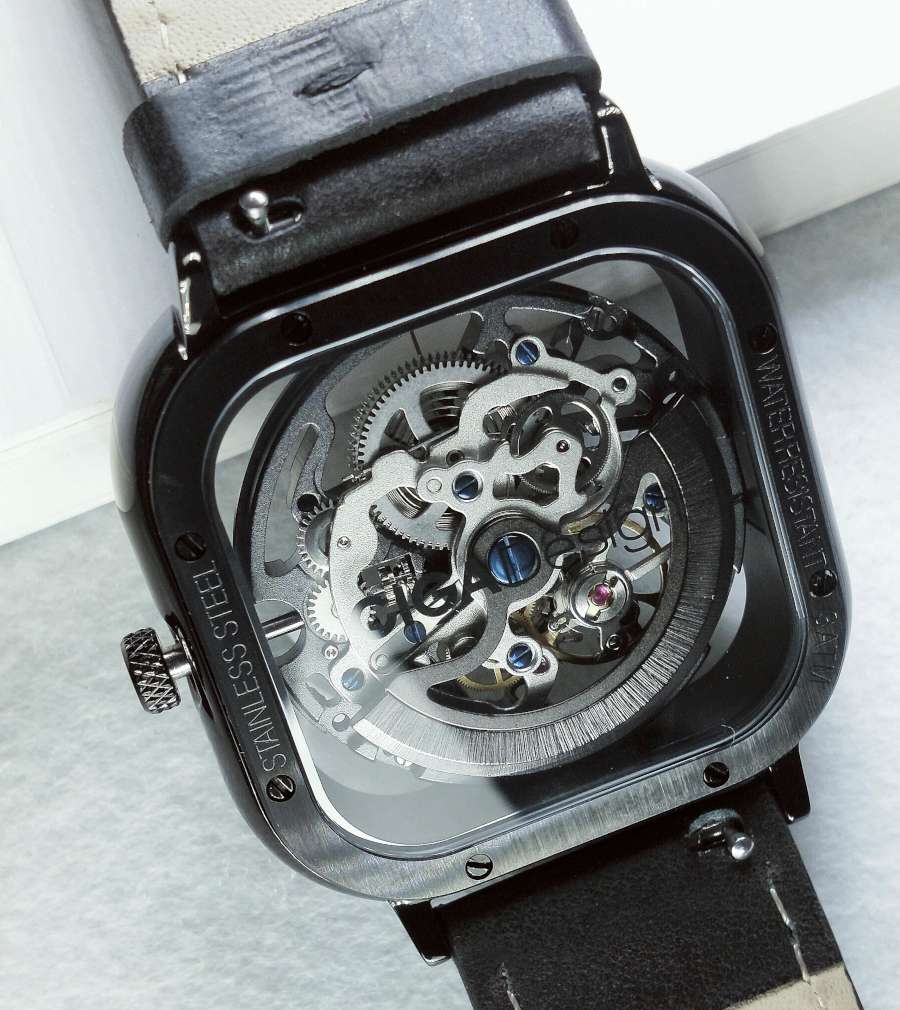 Xiaomi CIGA Design, the focus is on the skeleton transparent movement

Like many design-oriented watches, the CIGA Design Full Hollow is very attractive to look at, but not all that easy to read. The red seconds hand is very visible, but the minute and hour hands rather get lost against the background formed by the skeletonized movement, and you have to look for the red terminals of the hands. There is no SuperLumiNova and so in conditions of low light, you can’t see the time. But this CIGA Design mechanical watch is more about the concept, putting on a performance, displaying the passage of time in a spectacular and visible way, allowing the owner to witness the beating heart of this tiny machine.

The movement is the Seagull ST1646K-AAA, power reserve 40 hours, frequency 21,600 vibrations per hour (3 Hertz), 19 jewels, rated precision -15/+30 seconds max deviation per day. It is made by the Tianjin Watch Factory, founded in 1955 and now the largest Chinese watch and movement manufacturer. The “AAA” suffix indicates that it is at the brand’s highest level of quality. The parts have an industrial level of finish, with sandblasting used for the skeletonized mainplate.

Xiaomi and CIGA Design watches, who are they?

Xiaomi are a giant company founded in 2010 making smartphones, fitbands and other consumer products. CIGA Design on the other hand is a company founded in 2012 by industrial designer Zhang Jianmin, and based in Ampang, Malaysia. Jianmin has designed for the Beijing Olympics, the Shanghai World Expo and the Shenzhen Universiade, and he works in architecture, aeronautics, retail products. His love of mechanical watches induced him to found CIGA Design. He is the Chinese watch designer to have won most Red Dot Awards – eight – in addition to an iF Gold Award and two German Design awards. 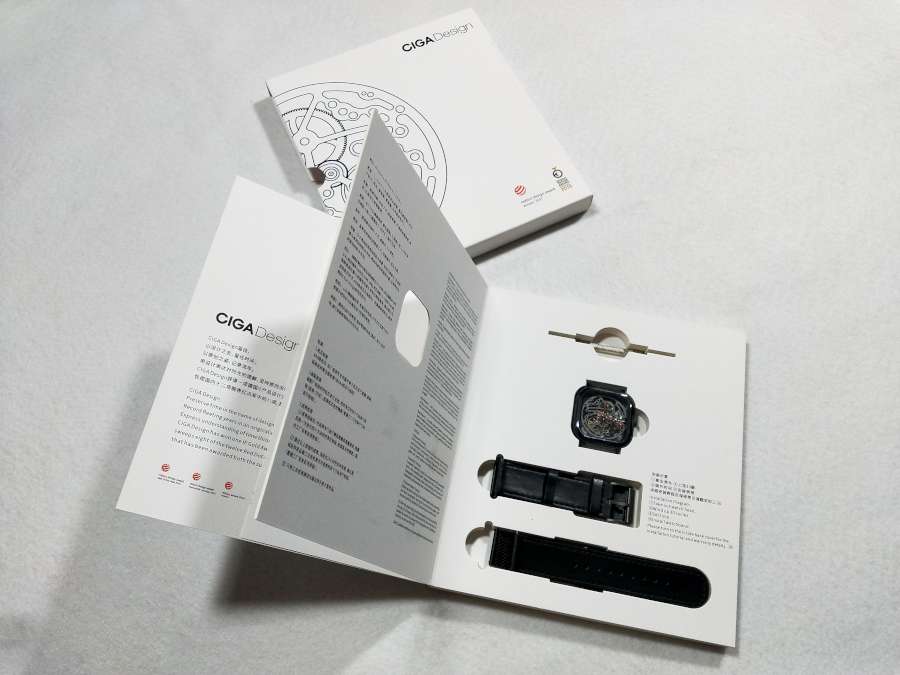 This watch brings together three players, Xiaomi with their expertise in mass-produced consumer products, the Tianjin Watch Factory, and CIGA Design. The result is a cool skeleton watch that is attractive, contemporary and accessible. Its appearance could be compared to Cartier, Hublot, Roger Dubuis and other brands, but these sorts of skeleton watches have much higher prices – for example, about €27,000 for the Cartier Santos skeleton watch in steel. At €168, the Xiaomi CIGA Design black skeleton watch is one of the best skeleton watches under 300 euro. It is available on Amazon and other online stores, in two versions, black or natural stainless steel. You can purchase it direct from the CIGA Design store, now at an even lower price, currently €148.95. 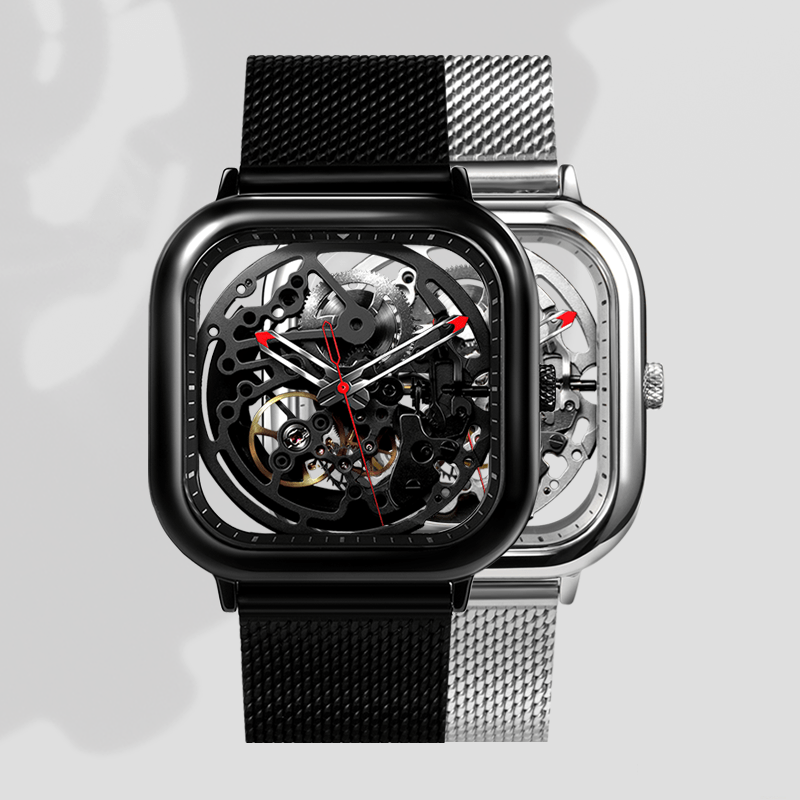 Read an interview with more information on the Xiaomi CIGA Design skeleton watch.