Patria is a revival of a Swiss brand founded by the brothers Louis-Paul and César Brandt in Bienne in 1892. They had inherited a thriving business from their father Louis Brandt whose principal company introduced several brand names and eventually grew into what would become Omega, originally the name of a calibre. The Patria brand was used for the military watches made for officers and soldiers during the First World War; the brand survived until the late 1940s and then disappeared. It was brought back to business in May 2019 by initiative of current CEO Jolyon Lambert (also known as Jolyon Wardle), a British industrial designer who trained at Central Saint Martins, London. His career includes 3D renderings made for Grönefeld The Horological Brothers and work with Longines and A. Favre & Fils; Jolyon Lambert set up his owm 3D rendering company named Blade Render. 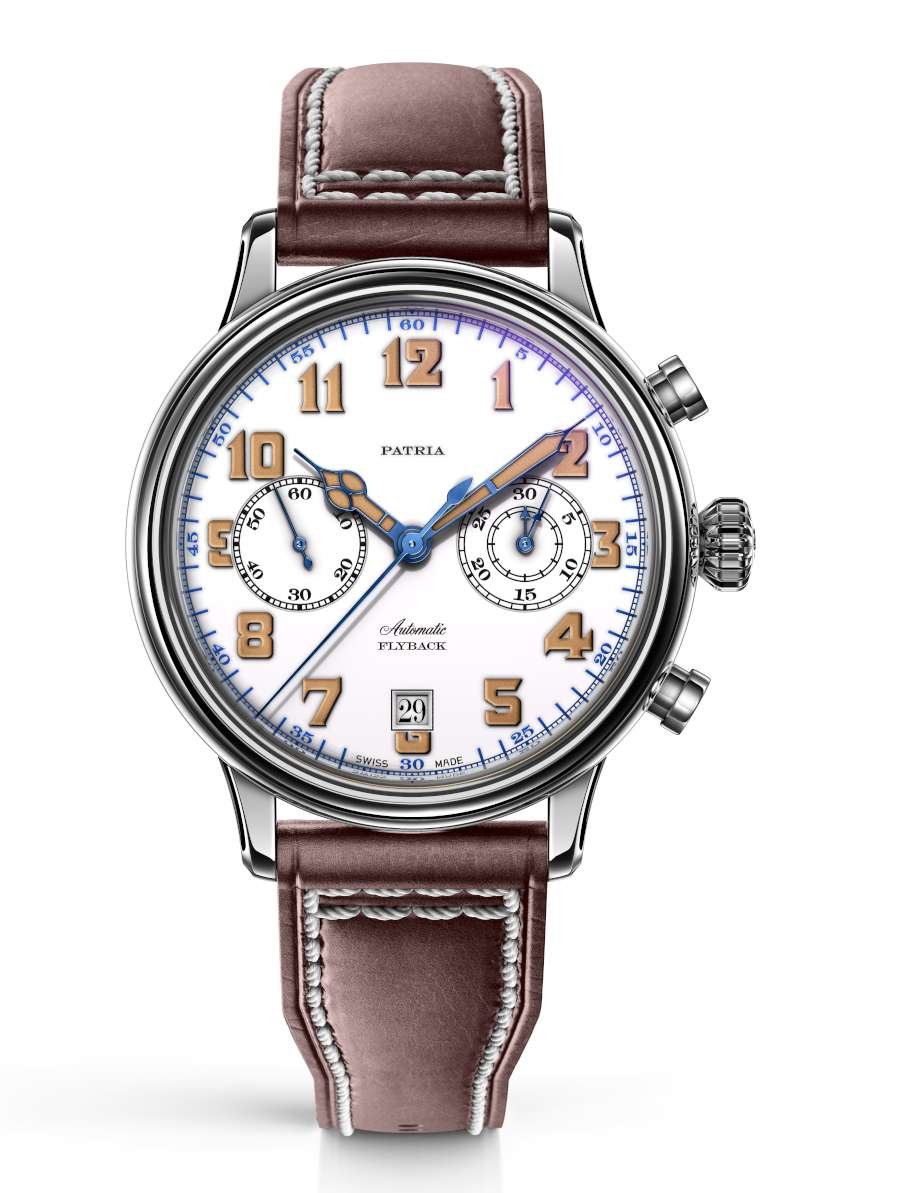 The Patria Brigadier Chrono has the looks of a military watch, combined with all the benefits of contemporary design, such as a display caseback, a sapphire crystal box-type watchglass with anti-reflective coating, and 50 metres water resistance – slightly higher than the usual 30 metres. It is supplied in a burl walnut case with suede-lined interior. The watch’s case is in stainless steel, 42 mm in diameter and 15.6 mm thick. The strap is in Italian leather with quick-release springbars. The watch is also available with a stainless steel milanaise bracelet, which adds €250 to the price. 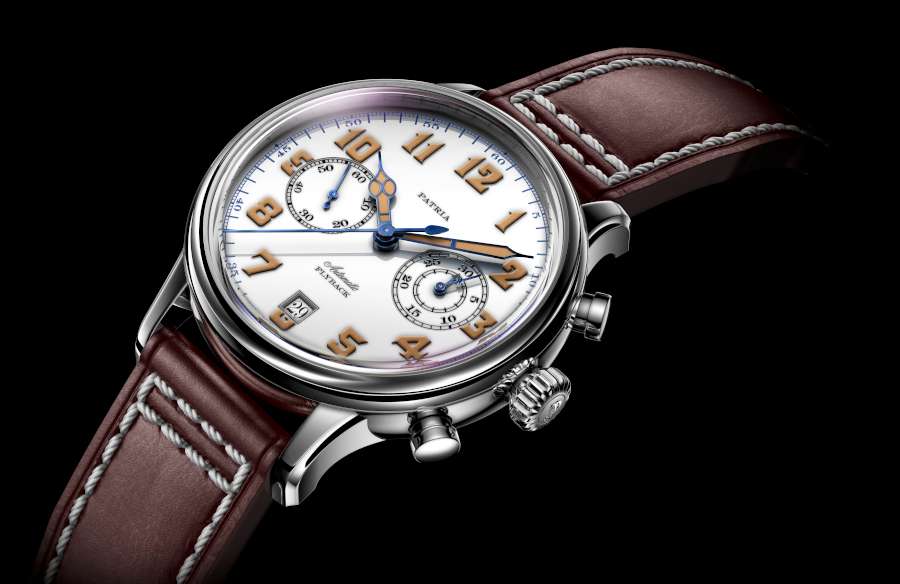 The dial is in white enamel, with numerals coated with “old radium” Swiss SuperLumiNova that glows green in low light. The lume is applied by hand to give the numerals a three-dimensional appearance. The dial is uncluttered, with a date window showing antique-style numerals at 6 o’clock, and two subdials, for small seconds at 9 o’clock, and a combined chronograph hour and minute counter at 3 o’clock. The seconds scale has quarter-second subdivisions, and it is easily legible all the way around, except for the section between 27 and 33 seconds where the second divisions have been left out to fit in “Swiss Made”. 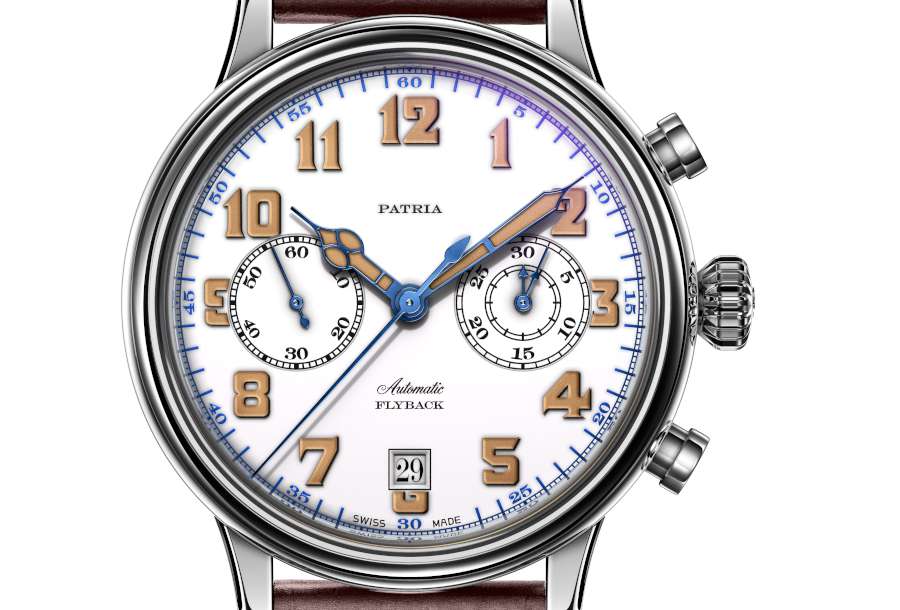 The most prestigious part of the Patria Brigadier Chrono is the movement, the Eterna calibre 3916A. It is self-winding and runs at 28,800 vph, 4 Hertz, with 60 hours power reserve. The view through the caseback is made more interesting by the skeletonized oscillating weight which makes it easier to see the details, which include a blued column wheel, the control element that makes starting and stopping the chronograph smoother. You can also see the flyback cam, which allows instant resetting and restarting by pressing the lower pusher. All parts are hand-finished. 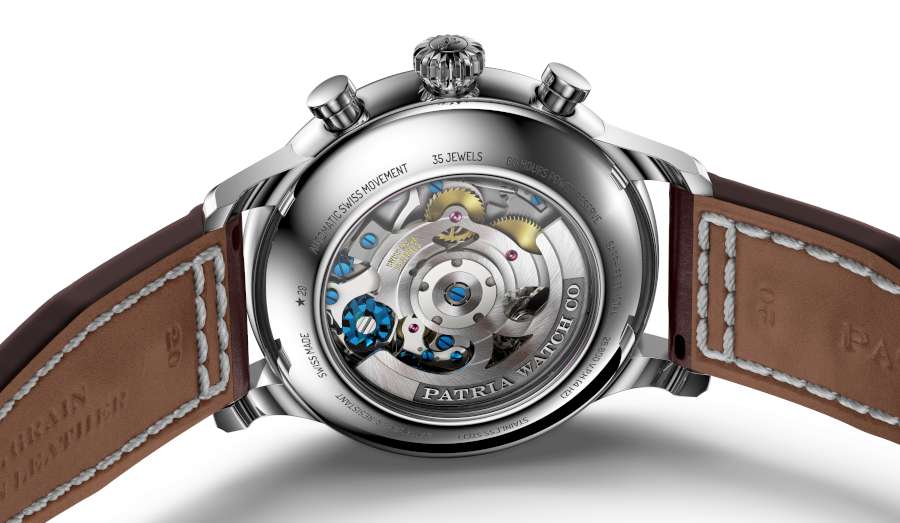 Price of the Patria Brigadier Chrono

All in all, this watch, though still expensive at €4,000, offers a lot in comparison with other chronographs by Swiss brands. The finish is excellent and it has a convincing vintage appearance. Read more at the Patria Watch Co. website. 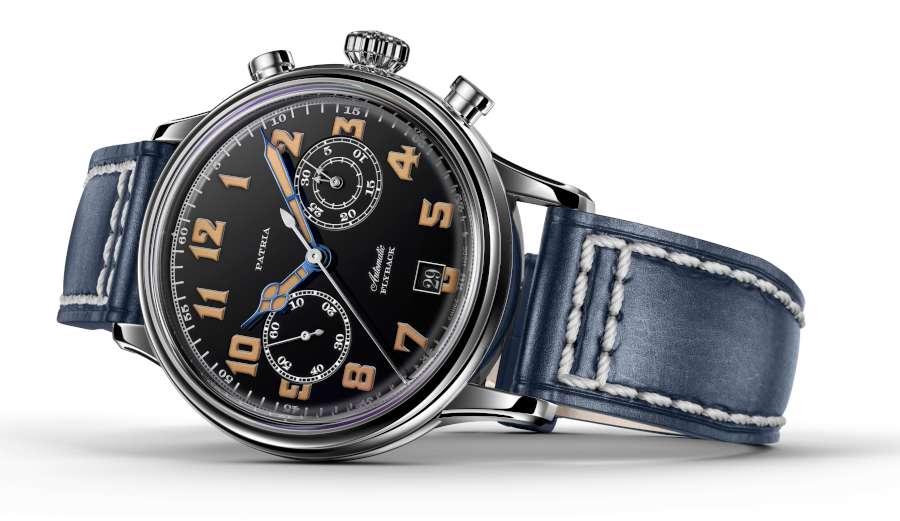 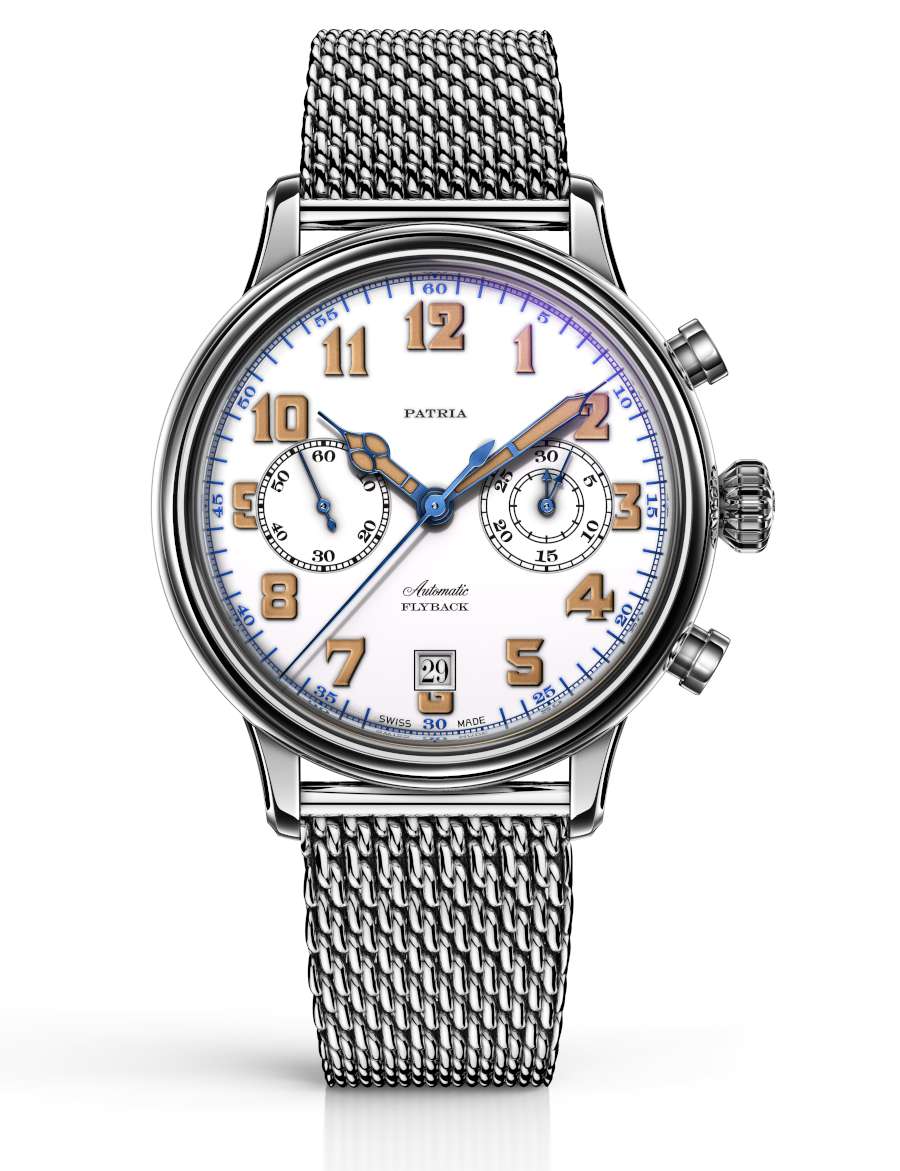