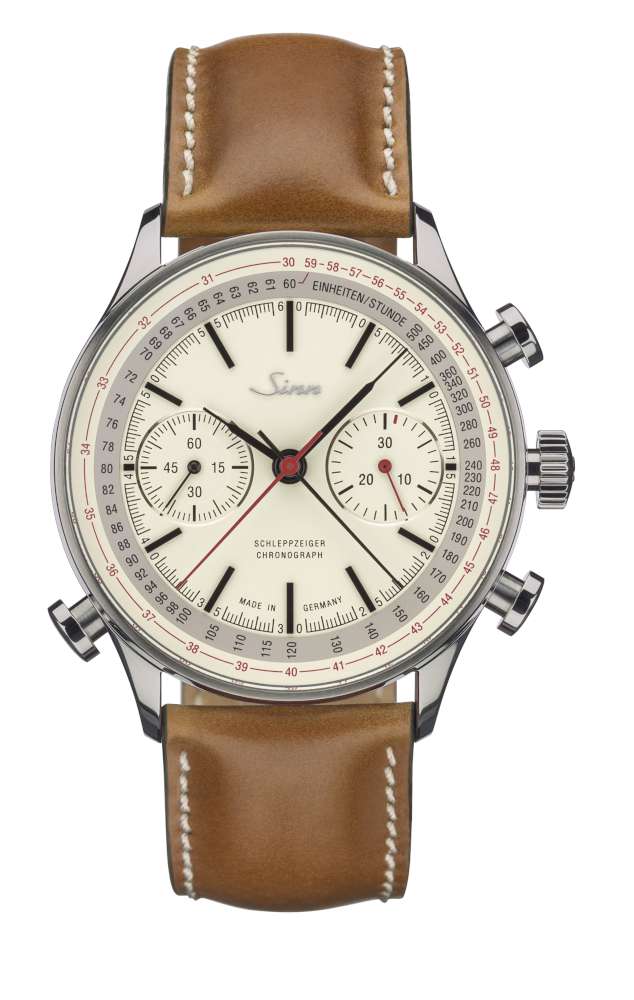 Helmut Sinn founded his company in 1961, and so this year marks its 55th anniversary. He himself would have been 100 on 3 September 2016, but he died three years ago. I’m sure he would have been pleased by this anniversary watch, because his motto was “as perfectly as possible, but only as expensive as necessary.” A limited-edition split-second chronograph at €5,500 is good value. Follow this link for a selection of split-second chronograph watches.

Right from the first glance it is an attractive piece, with a period look provided by the cream dial and black hands and markings, reminiscent of 1960s car dashboard instruments. It also looks very technical, with two tachymeter scales in addition to a seconds scale with quarter-second subdivisions, and three pushers on the caseband. The watch’s principal function sounds impressive in the German name on the dial, “Schleppzeiger chronograph:” this simply indicates the split-seconds function. You start the chronograph with the top right-hand pusher, and the two chronograph seconds hands, red on top, set off together. To fix an intermediate time, you press the pusher at 8 o’clock. This stops the lower, black split seconds hand, while the red hand continues on its course. Another press of the 8 o’clock pusher sends the black chronograph seconds hand back to underneath the red hand and they carry on together. You can repeat ad infinitum.

This piece by Sinn is instead based on the ubiquitous Valjoux 7750 chronograph movement, extensively modified to add column wheel control and the split seconds function. This work was performed by external supplier La Joux Perret, and in addition to adding the extra function, the column wheel control makes the pushers smoother in operation. One of the characteristics of the lever-operated Valjoux 7750 is the considerable pressure that you have to put on the pushers to operate them.

A few other brands have done the same thing – taken the Valjoux 7750 and adapted it for split seconds. For their Pilot’s Watch Double Chronograph Edition Antoine de Saint Exupéry IW371808, IWC designed and added their own additional split second module. This watch costs €12,400, a lovely piece, though it doesn’t have the column-wheel control. Italian brand Locman have also built a split second chronograph by adapting the Valjoux 7750, again without column wheel, at a price a little above the Sinn 910 at €5,850. So all considered, the Sinn 910 is exceptional value for money. 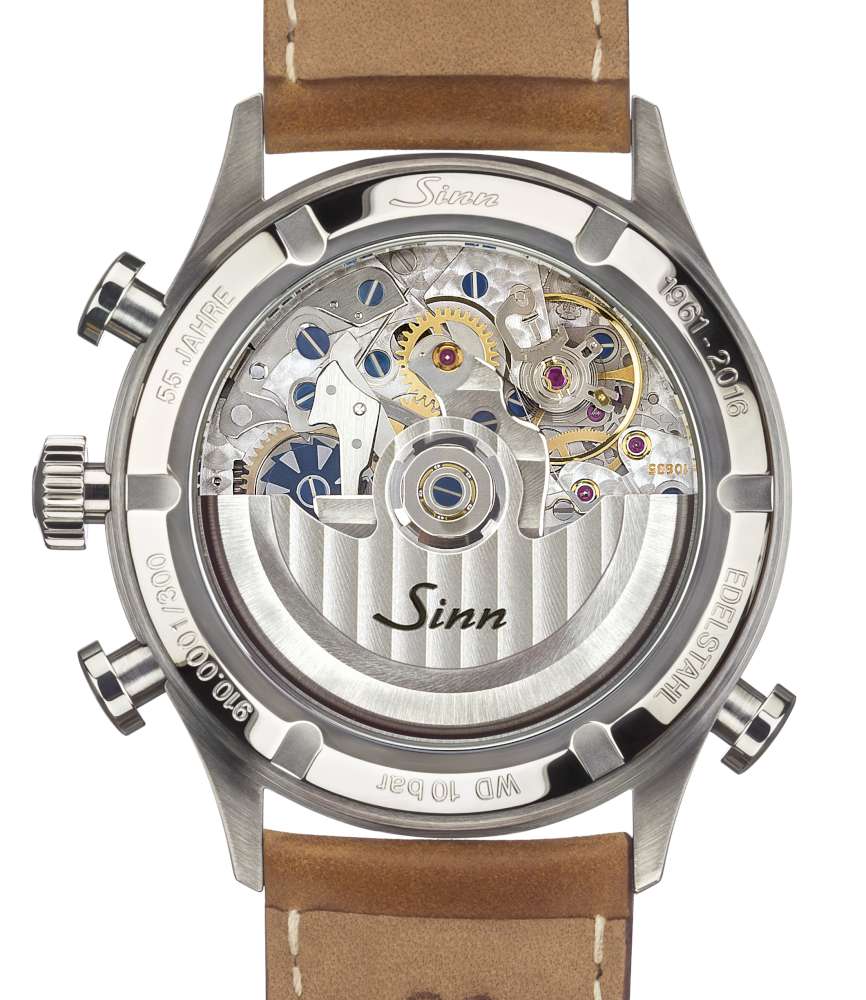 The case is in stainless steel with differentiated polished and satin finish, with 10 bar water resistance rating (100 metres) and a watch glass resistant to low pressure (typically a pilot’s watch feature). It is wearable for just about all wrists, with a diameter of 41.5 mm, fairly thick at 15.5 mm. The display caseback reveals the self-winding movement which is nicely decorated with blued screws, blue column wheel, and an oscillating weight with the Sinn logo and Côtes de Genève stripes. The movement runs at 28,800 vibrations per hour, and has the stop-seconds function for precision time-setting. At the edge of the caseback, engraved lettering celebrates the anniversary (1961-2016), and each watch is identified with its edition number, one of 300 watches.

There are just a couple of things on the dial that I find perplexing. I don’t like seconds scales on chronographs that are not consistent, as in this piece in which (like many other chronographs) the quarter-second divisions are interrupted every five seconds to provide room for the numerals. I’d love to have quarter-seconds all the way round, and I think I could get by without the numerals. I’m intrigued by the red mark at the 1-minute point on the 30-minute counter, I guess there is a good reason for this. And one day I’ll try to find out how to use those two tachymeter scales.

The Sinn 910 Jubilaeum, a limited edition of 300 watches, costs €5,500. It comes in a comprehensive package that includes leather strap and steel bracelet, and the tool that helps in strap changing. You can purchase it direct from Sinn on their website http://www.sinn.de/ 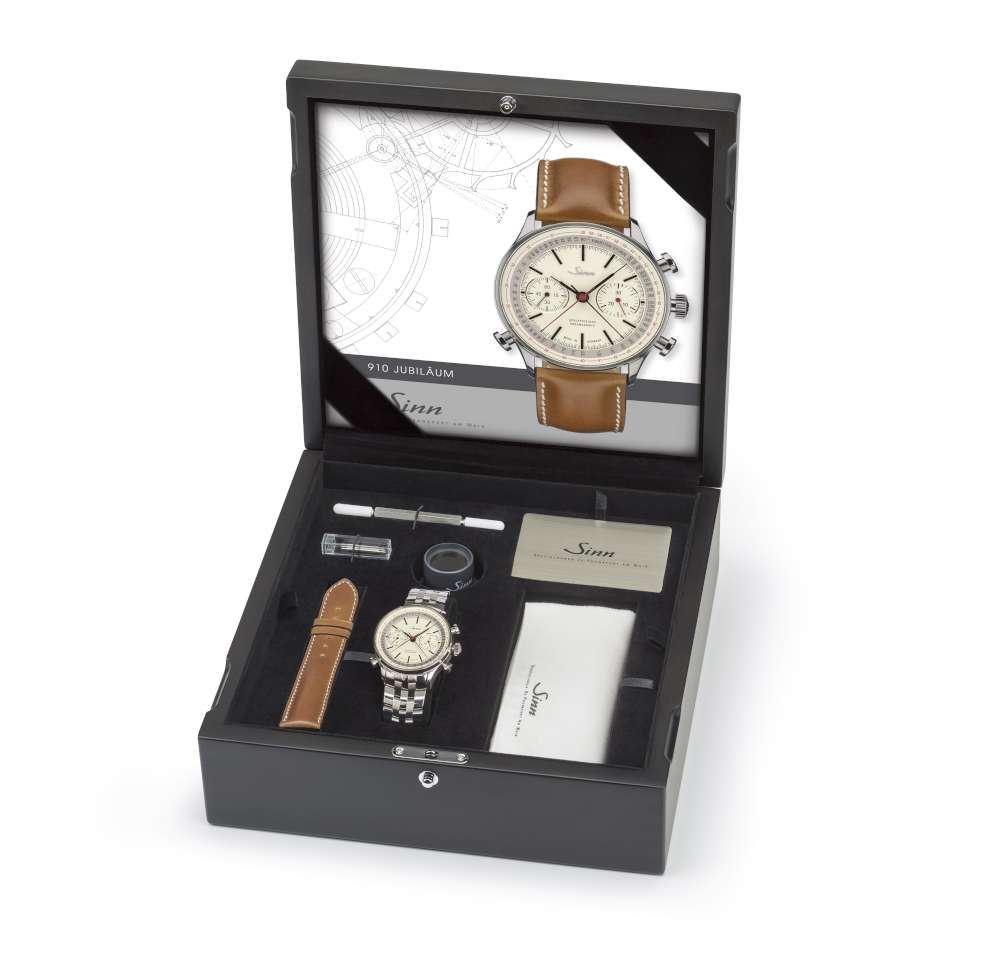