Maximilian Büsser and his MB&F celebrate the 10th anniversary of Horological Machine N° 4 with a one-off piece named HM4 Kittyhawk. This super-iconic watch is decorated with the shark’s mouth nose art characteristic of the Curtiss P-40 Kittyhawk. Like all MB&F creations, the HM4 is an appealing combination of kinetic art and time-keeping, in a style that is in part retro steampunk, in part futuristic. (Take a look at our reviews of other MB&F pieces, such as HM5, HM6 Space Pirate, and HM7 Aquapod). 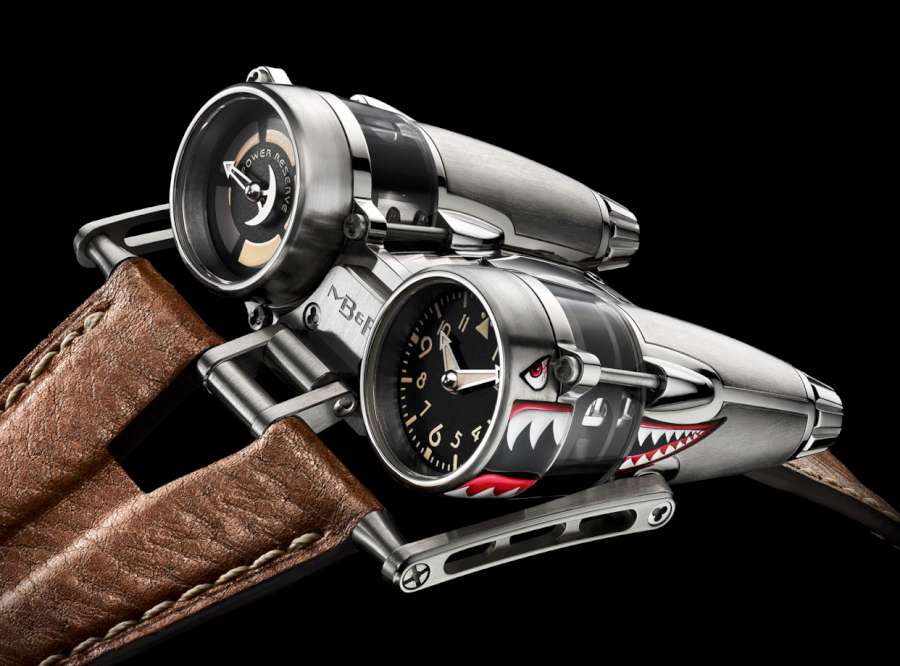 Notwithstanding its exuberant size and design, the HM4 is also surprisingly practical, with a dual display that is perfectly visible when you have your hands on the control column of an aircraft. The articulated lugs allow the watch to hug the wrist notwithstanding its appreciable size at 54 mm wide, 52 mm length and 24 mm thickness. Weight is kept down by the use of Grade 5 titanium for the case. 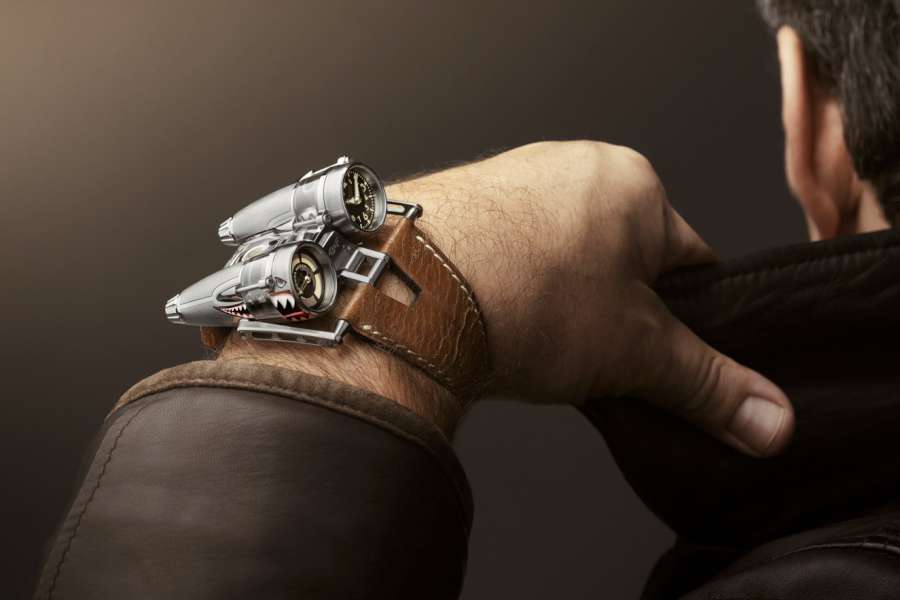 The hand-wound movement is partly visible through sections of sapphire that reveal details of the dual mainspring barrels, and the two vertical gear trains that transfer power to the time indications in one pod, and the power reserve indicator (72 hours) in the other. Two crowns, one at the rear tip of each pod, provide separate winding and time-setting functions. The large balance, running at 3 Hertz, can be seen through the sapphire central section. The movement has 311 components, and it was developed by Laurent Besse and Beranger Reynard. 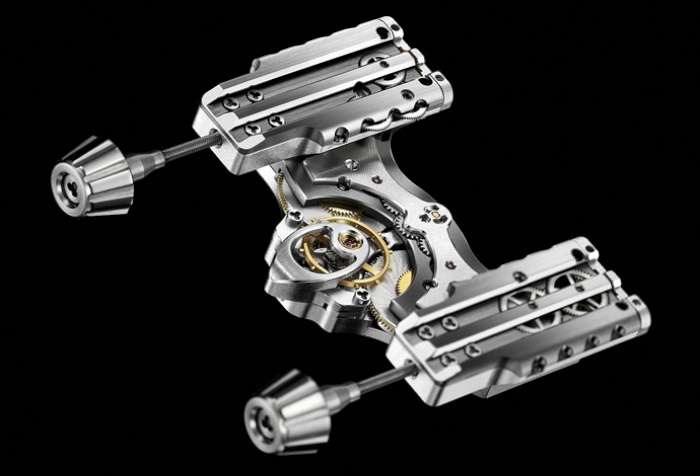 There are hints of aviation everywhere, a reflection of Maximilian Büsser’s childhood hobby of assembling plastic model aircraft kits. The movement in the pods is shaped like the Spitfire’s Merlin engine, while the pods themselves are like the two jet engines at the tail of the A-10 Warthog. The dial has the traditional pilot’s watch fonts and the triangle with two dots at 12 o’clock. The hands and hour markers are coated in SuperLumiNova. 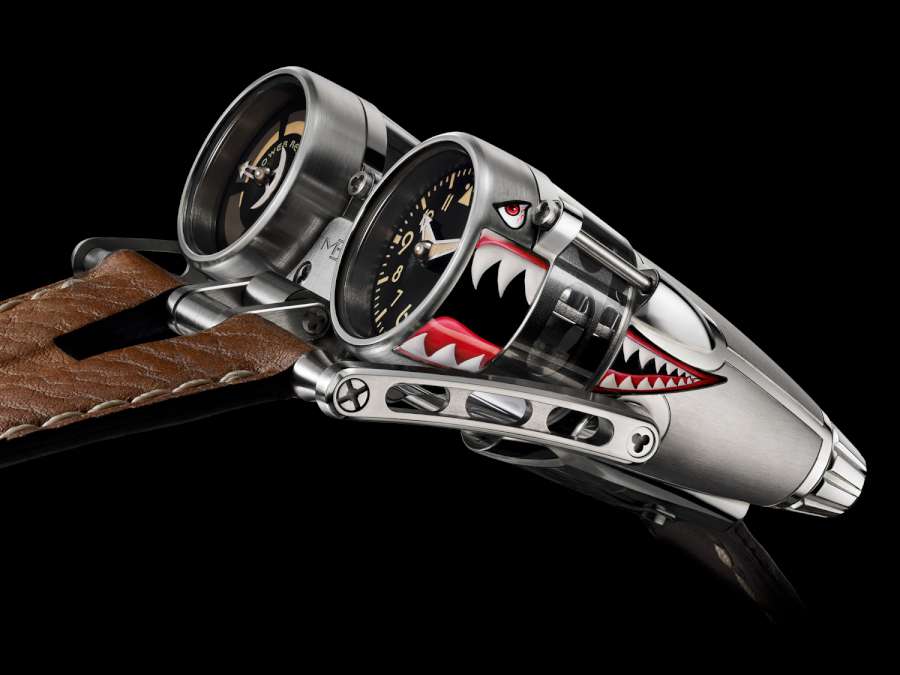 Price of the MB&F HM4 Kittyhawk

This final version of the 100-strong HM4 has hand-painted decoration applied by miniaturist painter Isabelle Villa. Like all MB&F timepieces, this watch is a dream, and the HM4 in particular is the aviation enthusiast’s dream. The 2010 HM4’s price was $158,000. Naturally the HM4 Kittyhawk, a one-off piece, costs a little more: CHF 218,000 + VAT. Read more on the MB&F website.

In the photos below, the two aircraft providing inspiration for the MB&F HM4 Kittyhawk, the Curtiss P-40 Kittyhawk, and the Fairchild Republic A-10 Thunderbolt “Warthog”. 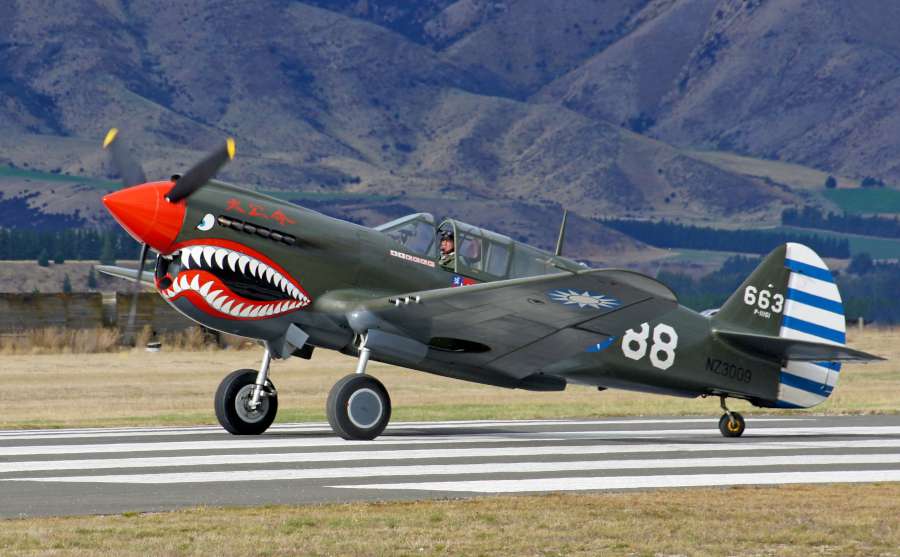 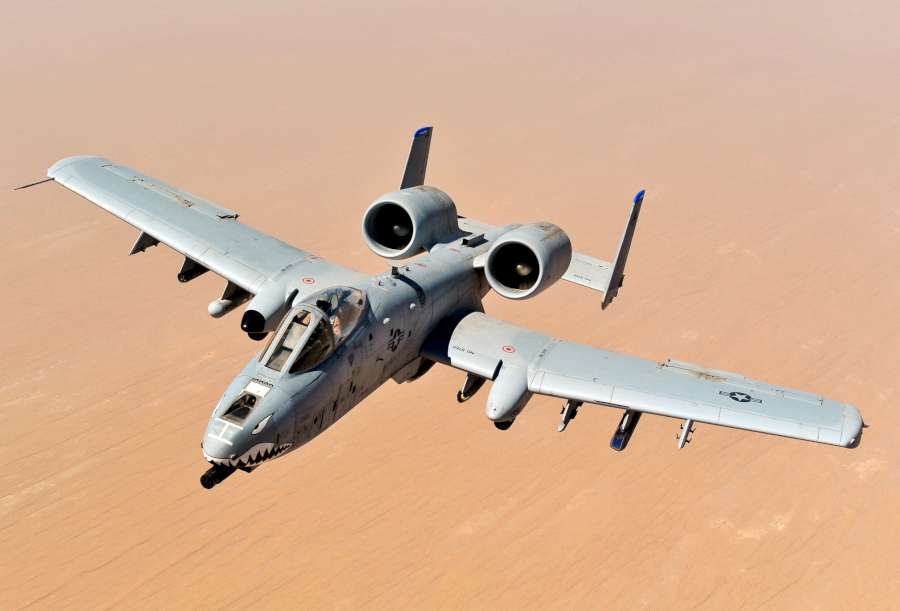 A-10 Warthog, photo by US Air Force